The piccolo latte is a mysterious drink. This little milk beverage can be hard to find and is commonly misunderstood. However, it can be a great addition to coffee shop menus, with its punchy espresso and smooth milk. For customers, it’s a delicious alternative to the classic coffee choices.

We’re going to delve into the world of the piccolo latte. Join us and find out what it is, where to find it, and how to make it. 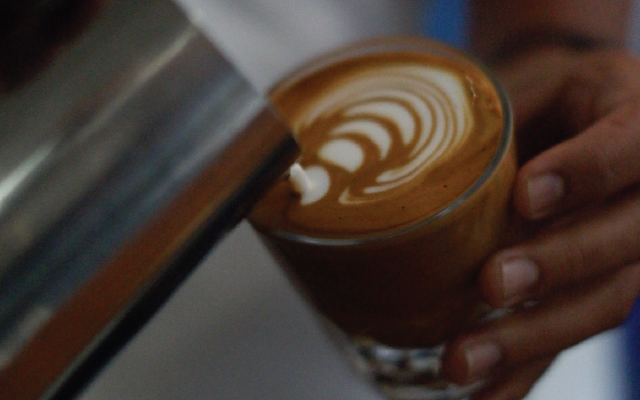 What is a Piccolo Latte?

Piccolo translates into ‘small’ from Italian, but this drink isn’t simply a small latte.

The piccolo latte, or piccolo, as it is commonly referred to on coffee menus, is a small milk beverage that’s typically served in a 3–4 oz/85–114 ml glass. Saša Šestić, owner of Ona Coffee, and World Barista Champion 2015, describes it as “one part of espresso and two parts of steamed milk with a layer of silky foam on top”. More specifically, he defines the measurements as “a shot of espresso, around 20–30 ml, with 40–60 ml of milk”.

The single espresso shot is topped with steamed, stretched milk, allowing it to blend with the coffee, and has a small amount of foam atop the drink. This means that the flavour of the espresso is able to come through without being overbearing. Ceiran Trigg, Director of Ancestors Coffee in Norwich, UK, suggests that the piccolo is an “option to try for a well-balanced espresso/milk-based drink”. 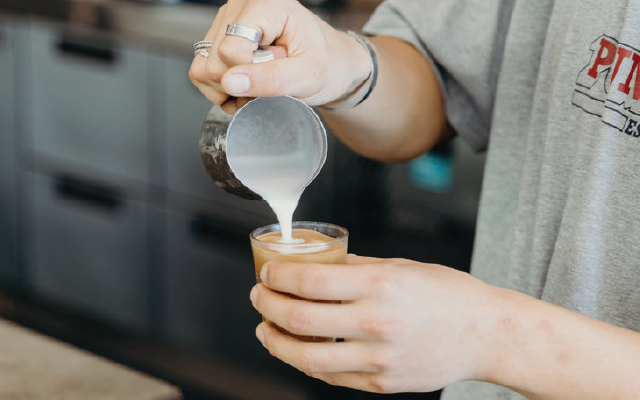 Why The Piccolo May Be Hard to Find

Have you seen a piccolo on a menu at your local coffee shop? They may not feature as widely as the classic cappuccinos and lattes.

Ceiran explains that a potential reason for the piccolo’s lack of popularity in the UK is “due to consumers’ confusion on what the drink is”. He thinks that “a lot of coffee shops would be serving cortados instead of piccolos and vice versa”.

The definition of piccolos, cortados, and other milk drinks can be confused, which means consumers are less familiar with what to expect when they order. Ceiran follows up with “I feel people take comfort with sticking to the most common drinks such as lattes, cappuccinos, and flat whites”, as these drinks are well-known and generally consistent.

Frederik Schiøtz of True Intent Coffee, Copenhagen states that piccolos are rarely found on menus in Denmark. “Serve a piccolo to a Dane, and they’d probably call it a cortado,” he says, explaining that the cortado is a more popular drink in larger cities in Denmark.

Despite the confusion, you will still find a piccolo in some places. Stevie Hutton, the owner of  the UK-based coffee shop 44 Poets, has travelled extensively throughout countries in Asia and says it is “generally the only place I see piccolo latte on the menu everywhere”. Stevie speculates that language may play a role, with Asia “still following the Italian constructs of cappuccino, latte, piccolo etc. No flat whites and other culture drinks as a general rule”.

The problem isn’t the drink – it’s simply that so few people know what it is and how to make it. The more the piccolo is tasted and enjoyed, the more it will find a place in coffee shops. 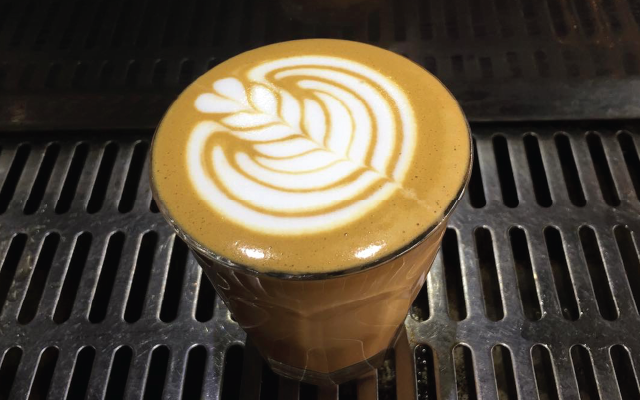 The Piccolo Latte vs Other Milk Drinks

The piccolo is commonly confused with lattes, cortados, macchiatos, and more. But each drink offers distinctive flavours and textures.

The piccolo might have “latte” in its name, but don’t let that confuse you. A latte is significantly larger: although it varies according to the coffee shops, a standard latte is around 8 oz/230 ml compared to the 3–4 oz/85–114 ml piccolo.

The milk consistency is similar. Both drinks have steamed, stretched milk which mixes smoothly with the espresso. Despite this, Saša explains that the piccolo is “a lot more espresso driven than typical lattes; it’s punchier, with more flavour”.

Although recipes for the cappuccino can vary, it’s fair to say that it’s quite different from a piccolo.

First, a cappuccino is a larger drink, usually served in a 5–6 oz/142–170 ml glass. The milk for a cappuccino will be steamed using more air to produce a drier and frothier texture, which is then poured on top of the espresso. The more aerated milk doesn’t blend with the espresso in the same way as the piccolo, creating more distinct layers instead.

Consumers can taste the bold espresso flavour while drinking both a cappuccino and a piccolo, just in different ways. The dry milk in a cappuccino serves to slightly take the edge off the espresso, which the consumer reaches at the bottom of the cup. The piccolo still has a punch, due to the ratio of espresso to milk, but the difference is the stretched milk blends with the espresso, creating a distinct yet bold flavour.

The flat white has fast become a coffee shop favourite. Cappuccinos and lattes can be made with a single or double shot, but flat whites will usually always have a double shot, compared to the piccolo’s single shot.

This double shot is topped with steamed milk with a small layer of microfoam on top in a 5–6 oz/142–170 ml glass. The milk consistency in a flat white is similar to that of a piccolo, resulting in a well-blended drink.

Despite its slightly smaller size and similar milk consistency, the double shot of espresso in a flat white creates a much bolder espresso flavour compared to the piccolo.

The macchiato and piccolo are both small drinks that are typically served with a single shot of espresso. It’s the steamed milk that makes all the difference.

The macchiato is ‘marked’ with similar milk to the cappuccino, which has been steamed with more air, for a dry and frothy texture. Just a few teaspoons of milk are added to accompany the espresso and take the edge off it. This is a different experience to the blended milk and espresso of a piccolo. 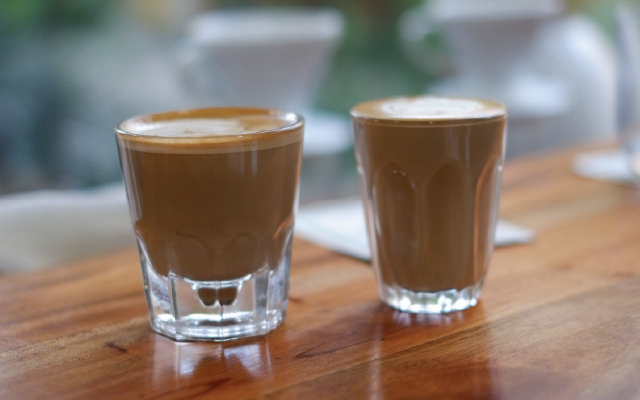 The cortado serves as an important marker for defining the piccolo. They are commonly mistaken as the same thing: a small milk beverage served in a similar-sized glass with steamed, stretched milk, and a little foam on top.

Grant Gamble, Events Director for the Toronto Coffee Festival (Allegra Group), says, “After spending time in Australia I discovered that a piccolo is a single shot of espresso in a 3–4 oz [85–114 ml] cup with latte-texture milk, whereas the cortado is a double shot.”

What does this mean for the taste of a cortado? The single-shot piccolo is more delicate, less intense, and sweeter. The cortado has a more bold espresso flavour and is less sweet due to less milk in the cup.

“There’s a huge strength difference,” Ceiran says, pointing out that this can create problems if consumers aren’t aware of the difference. “If you’re expecting a certain strength [from the piccolo] then it’s doubled up unexpectedly, it’s not a pleasant experience. The espresso could be misinterpreted as a poor extraction.”

Ceiran also makes the point that if you’re a cortado drinker and you’re served a piccolo, that it tastes “weak and not intense enough”. It’s important that the difference between these two drinks is understood, so consumers know what to expect. 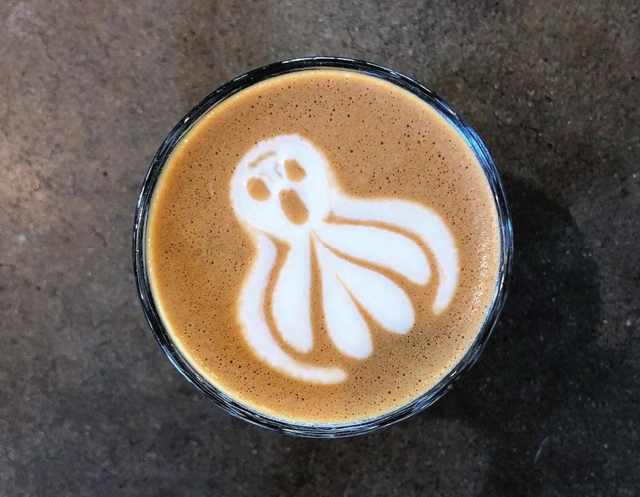 Most importantly: how are you going to make your piccolo? The exact recipe is, as always, down to personal preference – but here are some tips to help.

To make a piccolo, extract a shot of espresso, between 20–30 ml. Steam your milk to around 60°C/140°F, allowing enough air into it to create some microfoam, but ensuring it’s stretched and silky. Pour between 40–60 ml of milk onto the espresso at a slight angle with a bit of height, allowing the milk to mix nicely with the espresso. To finish, allow a little room for a small layer of foam on top.

Saša personally recommends opting for a coffee with “chocolate, hazelnut or caramel notes”. He advises against fruity coffees, since “with such a small amount of milk, they tend to be sour”.

Don’t be afraid to experiment a little to get the kind of flavour you want. Saša says that classic piccolo recipe of one shot of espresso topped with milk will create a bold and heavy flavour. However, if you want a bit more balance in the cup, he suggests “running a full shot of coffee, to get that nice and balanced coffee… 20–22g on each side… take out one-quarter of this, and then pour in the milk”. This should retain the intense espresso but result in a sweeter cup. 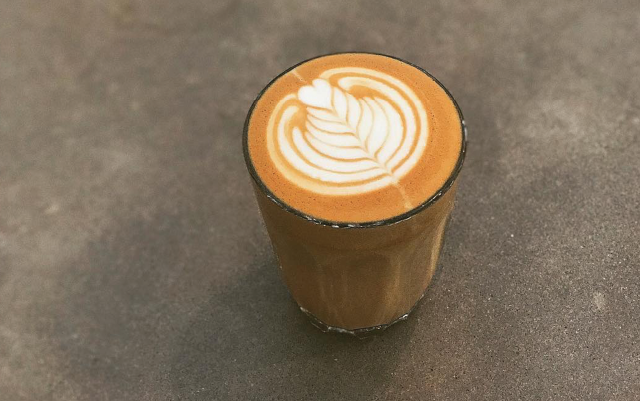 If you haven’t tried a piccolo before, now might be a good time to try. Got an espresso machine at home? You’re good to go. If not, speak to your barista, ask them to try the suggested piccolo recipe, and take it from there. The more the piccolo is talked about and enjoyed in its own right, the more we might see it in coffee shop menus.

There are so many different milk and espresso drinks to try, with their own delicious flavours. Yet the smooth yet punchy piccolo latte deserves a little limelight.

Enjoyed this? Check out What Is a Flat White & How Is It Different From a Latte?