China might be the fourth-largest country in the world and have the largest population on earth, but it has one of the world’s lowest coffee consumption rates, with citizens consuming an average of just one cup a year.

While this might not sound promising, coffee consumption rates in China are growing at 30% a year, compared to an international rate of 2%. For producers and roasters looking to enter an untapped market, it offers incredible potential.

For insight into this market, I spoke with Felipe Cabrera, Director of Wholesale Coffee at Ocean Grounds Coffee, and Natalia Li, Green Bean Buyer for Ingenuity Coffee. Both will be appearing on a panel titled China: The Emerging Market at next year’s Producer & Roaster Forum in Honduras. We discussed China’s recent market developments, why consumption rates are increasing, and what roasters and producers can expect from it all. 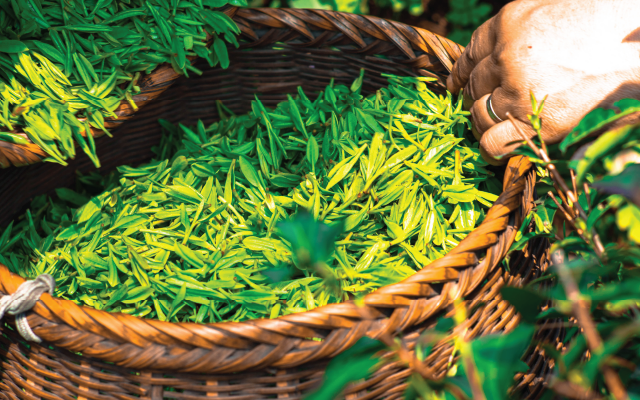 Fresh tea leaves are harvested and collected in a basket.

China has produced and consumed tea for centuries. The country produced an estimated 2.8 million tons of tea in 2018 and currently accounts for almost 40% of the world’s total tea consumption. Up until the 1980s, coffee was treated like an expensive gift, rather than something to be enjoyed.

It only penetrated the mainstream market in 1999 when the first Starbucks opened in Beijing’s World Trade Center. At this point, the specialty coffee scene was still a long way from becoming established.

Originally from Colombia, Felipe spent several years living in China before taking on his current role at Ocean Grounds Coffee. He says, “When I arrived in China… choices in the city were very scarce. Besides a few Starbucks outlets which were considered quite expensive at the time, there were two Western food restaurants… that served basic espresso drinks… Most Chinese coffee consumers, however, were still drinking Nestle or Maxwell instant coffees on campuses, at their offices, and even at home”.

Instant coffee was popular in China until 2012 when imports started to decrease. This was due to an increased interest in ground coffee, with more consumers choosing to visit coffee houses instead of making instant coffee at home.

This preference could be attributed to the rise of second wave coffee chains such as Starbucks and Luckin Coffee. Currently, Starbucks owns over half of the share of the Chinese coffee market. Between 2017 and 2018 their revenue almost doubled, and it’s estimated that a new Starbucks store opens every 15 hours in the country. 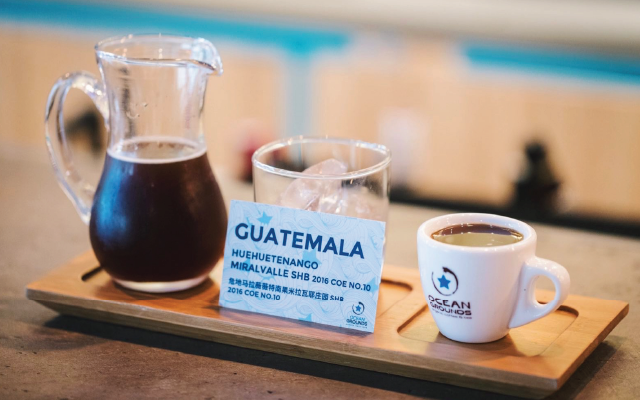 Why Is Consumption Increasing?

Between 2008 and 2018, Chinese coffee consumption increased by 1032%, thanks to the growing influence of Chinese millennials. Currently, individuals born between 1981 and 1996 make up over a quarter of China’s population, account for over half of all luxury goods purchased, and hold over two-thirds of all passports. This group tends to have a higher disposable income than previous generations, so they can afford these luxuries.

The millennial penchant for travel means that some will be exposed to Western ideals while overseas, with those in urban areas likely to come into contact with Western lifestyles and media in their day to day lives. Additionally, a significant portion will be students returning from studying in the UK, Canada, and Australia, who want to maintain the coffee drinking habits they’ve established abroad.

Felipe tells me, “Their purchasing power is quite significant. They don’t hesitate to buy a 30+ Ren Min Bi coffee cup (around US $4.5) at Starbucks or Costa Coffee, or for the coffee connoisseurs to spend 50 Ren Min Bi (approx. US $7) or more.”

By being willing to pay more, this age group is helping specialty coffee emerge as an industry. As they’re increasingly willing to pay higher prices for higher quality, many local roasters and coffee shops have started to take advantage of this.

Natalia tells me that another important factor that is helping the growth of the specialty coffee market in China is the internet. She mentions that the country’s biggest e-commerce shop, Taobao, allows many coffee roasters to sell their specialty coffee directly to the public, using distinct online branding and an online storefront. 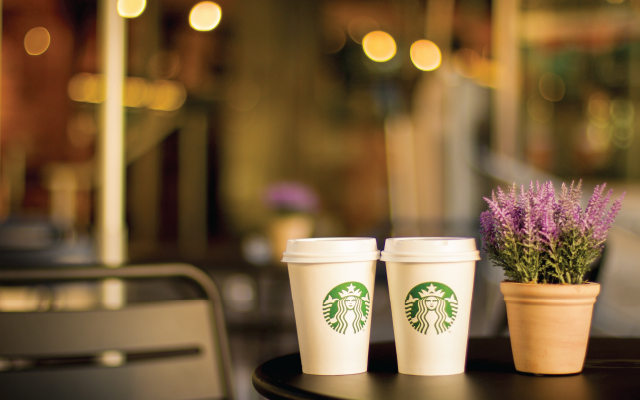 Starbucks coffee cups displayed on a table. Starbucks is one of the biggest coffee store chains in China.

Challenges to Entering This Market

Roasters and coffee shops looking to enter the Chinese market need to be prepared for the domination of chain stores. With over 3300 Starbucks stores in existence and Chinese chain Luckin planning on opening 10 000 stores by 2021, they have a strong grip over the market. In 2015, KFC also launched their own affordable coffee offering, which is available in many of its 4500 outlets across the country.

Luckin Coffee has grown exponentially since it was established in October 2017. In the nine months following its inception, it opened 525 shops. Customers can only place orders online before picking them up, using an app linked with WeChat (China’s largest messaging service) to do so. They say this allows them to track customer coffee habits, so they can better meet their needs. WeChat differs significantly from other social media platforms as it can connect with 85, 000 other apps, allowing users to shop online, pay bills, and video call someone.

Later this year, Luckin plans on opening a coffee roasting plant in Xiamen, with an annual production capacity of 30, 000 tonnes. This facility promises to use environmentally friendly technology for air cleaning and smoke elimination, and will exclusively supply Luckin branches. It’s a joint venture with the Louis Dreyfus Company, a merchant and processor of agricultural goods and one of the world’s largest green bean merchandisers.

A second challenge to market entry will be overcoming China’s cultural and language barriers. Felipe says “You cannot succeed here alone. The culture, language and bureaucratic barriers make it quite difficult to step into this market by yourself”. These barriers can include the diversity of taste preferences present. For example, Beijing and Shanghai consumers tend to prefer sweet tastes compared to those in Guangzhou.

These differences in taste could also extend to how the coffee beans are processed. Felipe explains that “Chinese… consumers greatly welcome fermented notes, as various styles of Chinese food have fermented dishes or condiments.” This could possibly restrict where a roaster or coffee shop sources their coffee, and how it’s processed. 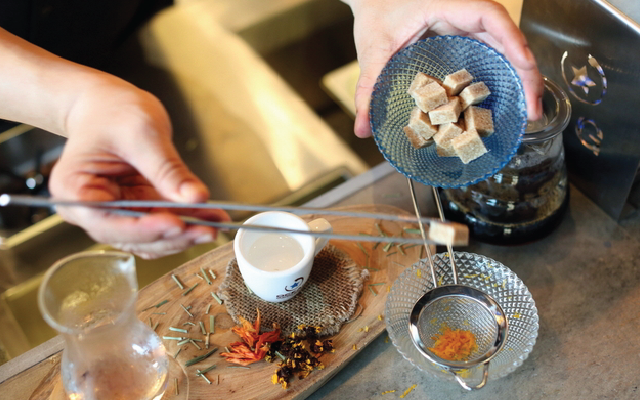 The Chinese coffee market could open up new methods of preparing coffee, unlike those seen in the West. Credit: Ocean Grounds Coffee

Felipe believes that the best way for roasters and producers to access the Chinese market is to team up with people in the industry. “Partner up with a company, agent, representative, or local professional that has presence and experience in [the] Chinese coffee market. They can help you to navigate among the particularities of [the] Chinese market and enter your product here with the right price, volumes and selling approach.”

Pairing up with an established business is important, as Chinese consumers tend to prefer brands that are tried and tested, or recommended by family. Being connected to the right business will help you market and advertise your business or product appropriately, and help you tailor its offerings to the habits of local coffee drinkers.

You’ll also need to use technology in your sales and marketing. “The social media environment here is very different … There is no Facebook, Twitter, or Instagram, and there is virtually no reliance on company websites. All promotion must be done through Chinese social media such as WeChat, Weibo, Red, etc. which uses very different methods,” Felipe explains. Understanding this way of marketing and adopting an interface allowing customers to communicate with you via an app could improve your success rate.

While understanding the current market is important, so is predicting future trends. Currently, coffee consumption is concentrated in urban areas, meaning that rural areas could be the next market. Felipe predicts that “specialty coffee roasting and brewing businesses are going to increase in megacities… where many young adults come to study and work… After some time, these young adults will go back to their hometowns to start families, start their own business[es], or to take care of their ageing parents, and they will bring the specialty coffee culture with them.”

Another change will be highlighting Chinese grown coffee. In 2018, the first International Specialty Coffee Expo and Forum took place; showcasing the Yunnan region’s varietals to international roasters and importers, and educating local industry professionals with talks and seminars. The event’s success, combined with the increasing quality of Chinese cultivated beans, led to another one being planned this year, with origin experiences at farms added to the offering. However, it has been postponed due to the Coronavirus outbreak.

International specialty industry giants have already started to take notice of Chinese coffee, with UK roasters Square Mile officially introducing aerobically fermented Yunnan beans to their menu. This award-winning roastery supplies coffee shops all over London, and is part of Cup of Excellence and the Speciality Coffee Association of Europe, amongst other organisations. Their Ou Yang is a creamy coffee with tasting notes of strawberry jam and lychee. It’s named after the farmer who uses natural double fermentation to create it. 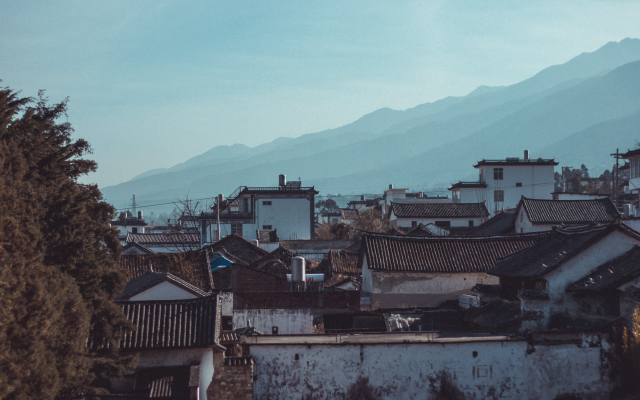 A Chinese village on a hillside. Rural areas might be the next place in China for coffee shops and roasters to expand to.

With a rapidly growing specialty scene, and a continual increase in coffee consumption rates every year, the Chinese coffee market presents an incredible opportunity that international parties should not pass up on.

As long as cultural traditions and preferences are taken into account, including China’s ongoing use of technology, local tastes, and the importance of connecting with trusted businesses, then roasters and producers should be able to thrive in this industry.

Enjoyed this? Then Read Exploring Millennial Trends in Specialty Coffee