With discussions on climate change dominated the media in 2019, it’s common knowledge that global warming is no longer an issue to be dealt with in the distant future. Sea levels are rising, temperatures are increasing, and many aspects of human life are already being impacted.

One of the areas that is changing most drastically is that of agriculture – which is also a significant contributor to greenhouse gas emissions itself. It’s set to have major consequences for coffee production, with research indicating that the amount of land for farming this highly sensitive crop will be halved across emission scenarios.

While the full impact of this will likely only unfold in several year’s time, climate change has already started affecting coffee plants currently in the ground. Here’s the impact it’s currently having on farms around the globe. 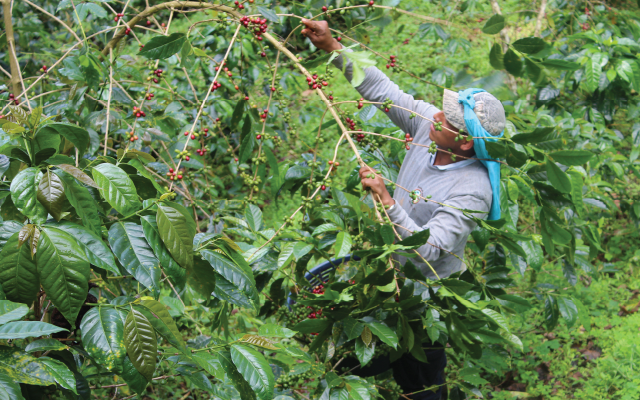 A coffee picker begins the first harvest cycle of the year at a developing farm in Boquete Panamá, Panama. Credit: Valentina Pedrotti, via International Coffee Farms

In order to better comprehend how climate change is affecting coffee plants, you must first understand the role that climate plays in the life cycle of a plant.

Every biological change that takes place in a plant (such as its flowering, growing, and ripening stages) is impacted by external parameters including temperature, humidity, and light. How a plant responds to these parameters determines its phenology – or seasonal life cycle.

In the past, natural responses to stimuli were more or less predictable because climate conditions were, too. However, drastic changes have disrupted this schedule, making expected changes occur unpredictably.

It’s something that has specific ramifications for coffee plants. In many coffee-growing regions, the higher humidity and warming temperatures are encouraging diseases and pests to thrive, and unpredictable temperatures and rainfall patterns are impacting harvest times and crop quality.

However, not all coffee producers are being negatively impacted by climate change. Certain highland plantations have found that their plants are responding better to specific aspects of its impact. 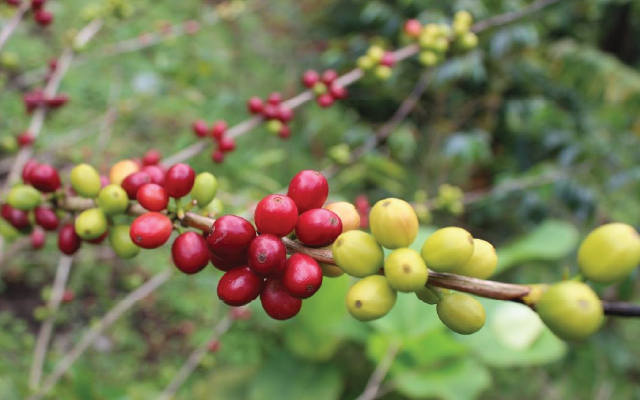 Ripe and unripe cherries on a tree at a farm in Bajo Boquete, Panama. Credit: Valentina Pedrotti, via The Cafelier

A rise in atmospheric carbon dioxide concentration is considered to be a driver of climate change – and has also been found to drive plant growth and crop yields in coffee without compromising bean quality. It does this by enhancing photosynthesis and ensuring impacted plants are less likely to experience oxidative stress.

Andres Lopez is General Manager of International Coffee Farms, which is in an organisation that owns and operates economically, socially, and environmentally sustainable specialty coffee farms in Panama.

He explained to me that coffee production in Boquete has radically changed since he started to work in the industry 30 years ago – with certain farms thriving under changing climate conditions.

He explains that “The increase in temperature has made it possible to grow coffee at higher elevations. 20 years ago it wasn’t possible to establish a coffee plantation at 1800 metres above sea level, because the growth rate was slow and the production too low for commercial purposes.” One coffee that has been produced under such conditions is Hacienda La Esmeralda, which is one of the world’s most expensive and highly awarded coffees.

Andres’ observations are in line with general research findings, which has predicted that coffee production at low levels and altitudes will be more negatively impacted than those at high altitudes and levels.. 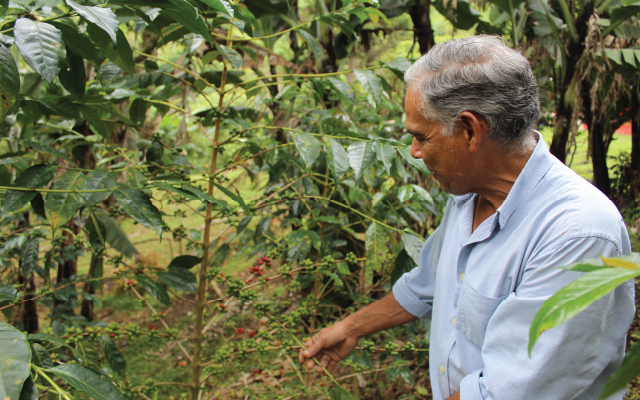 Issues to Watch Out For

For insight into the most pressing issues that coffee farms are facing, I spoke to Alexis Espinosa. Alexis is a Technical Sales Manager at Agro Q S.A, which a company in Panama that advises coffee and crop farmers on fertilization, pest management, and the use of agrochemicals.

According to Alexis, the most significant changes he has witnessed locally are on the phenology of coffee plants. He says that “In Panama, one of the main effects of climate change…has been abortion of flowers, undeveloped fruits associated with high temperatures during pollination season, or abortion of fruit due to a hydro deficit. Basically, the lack of moisture in the environment promotes abortion of the coffee cherry and therefore yields go down.”

Research reinforces this, by stating that high temperatures are known to disturb plant metabolism, and that extreme conditions can cause physiological stress in the plant, possibly reducing their photosynthetic efficiency.

In addition to this, the timing and frequency of flowering has changed. As Andres says, “the time-lag of the dry rainy season has caused multiple flowering stages per year in Panama.” This has resulted in more picking cycles and, therefore, a higher labour cost on harvesting. As labour is already the largest contributor to the cost of production, it’s placing an additional burden on coffee producers and their operating costs. 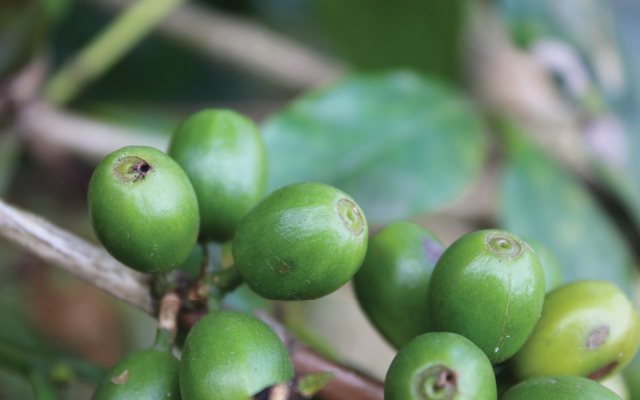 In addition to changing a plant’s phenology, climate change is also creating certain fluctuations to the environment that coffee plants thrive in. This has led several pests and diseases to flourish.

Alexis has begun to identify conditions on coffee plants there were previously exclusive to other crops. “In coffee, I’ve identified anthracnose (a fungal disease) on coffee blossoms, when it used to appear only on fruits”. This condition is most deadly when it reaches green berries, and is spread easily through rain. Another fungal disease, coffee rust, has the potential to ruin several years of coffee crops in succession.

Both diseases are said to be increasing due to an earlier onset of rainy seasons and prolonged wet conditions, which encourage spores to spread through wind and rain.

When it comes to pests, coffee berry borers (the most costly insect faced by coffee plants today) are finding it easier to infiltrate coffee plants. In the past, they would only complete a single generation a year, but thanks to rising temperatures, they are now able to complete more than one generation per season. 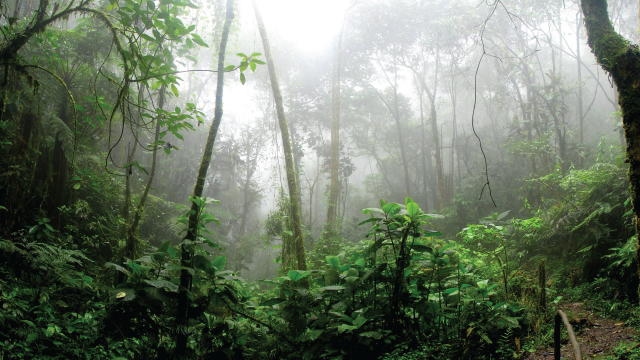 A rainforest during a foggy day.

The road ahead is undoubtedly a challenging one for coffee producers around the world. But despite this, there are many avenues available for them to adapt to the conditions climate change is currently producing.

There is a need for methods of adaptation that producers can easily implement without requiring large amounts of capital, extensive external support, and existing infrastructure. One way this can be accomplished is by helping them integrate farm management practices that are based on agro-biodiversity and the ecosystem.

Agroforestry is a promising solution, as studies show it can help with natural pest control and conserving natural resources, while acting as a buffer for the extreme changes caused by climate. However, it can also reduce yields. For this reason, this kind of solution’s acceptance will depend on the country and the market they are addressing.

It is more likely to be adopted in countries such as Panama (where the coffee market is focused on high-quality production) rather than countries focusing on high volumes of production, such as Brazil. “The solution lies in the farm itself,” says Alexis. “Currently, the agronomic industry at a global level has been working to improve the physical condition of the trees.”

Additional treatments can be aimed at the coffee plants themselves, to improve their health and ensure they’re better equipped to deal with external threats. Here, biostimulants can act as a “stress vitamin mix” for plants. Alexis says that “These products are applied to make the plant less susceptible to dramatic climate changes, as well as temperature and humidity changes”.

These are just two of the many solutions that coffee producers could implement. What each farm will need will depend on how it’s been uniquely impacted by climate change, as well as the farms size and resources. For this reason, any mitigation efforts must start with monitoring the farm and tracking its changes.

As Alexis says, “Now, more than ever, walking on your farm, getting to know it deeply, and being able to identify irregular changes is vital to make wise and timely decisions.”

Enjoyed this? Then Read How Coffee Producers Can Benefit From Data