Washed processing may result in a cleaner tasting coffee, but it dirties more water than any other processing method, using up to 20 cubic metres of water per tonne of cherry in some instances. When this happens, the acidic and sweet aguas mieles that it creates enters waterways, where the resulting pollution load can be several times greater than that of urban sewage.

However, just like dried coffee fruit husks can be repurposed into cascara tea, aguas mieles can be transformed from a damaging pollutant into a variety of valuable products.

While some businesses use it to create honey or biogas, producers can easily use it by transforming it into an organic fertiliser. I spoke to several Colombian smallholders about how they do it – and why coffee exporters and roasters should be supporting this process. 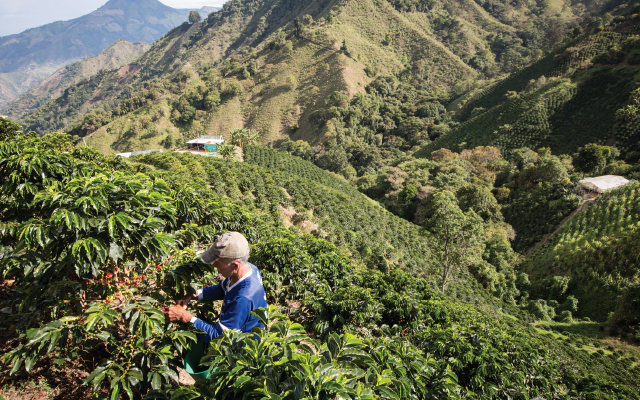 What Are Aguas Mieles?

In a fresh coffee cherry, the seed or bean makes up less than half of its total weight. During washed processing, the cherries are de-pulped, fermented, and then have their mucilage removed with turbulent water, before being dried. During wet processing, over 80% of the harvest’s volume is left behind as organic waste.

The resulting wastewater consists of fermenting sugars from the cherry pulp, mucilage, and pectins. Its gel texture comes from the undigested mucilage and pectic substances in the water.

The primary environmental effect of this wastewater entering other water sources is that high amounts of oxygen will be needed to break down the organic waste present, creating anaerobic conditions that kill off animal and plant life.

While no long-term studies have been conducted on the impact of coffee wastewater on human health, studies indicate that when it contaminates potable water sources, it can cause problems. A 2008 study assessing the effect of wastewater from a coffee processing plant in Ethiopia’s Zimma zone found that people living near the plant who consumed the polluted water experienced nausea, eye and skin irritation, breathing problems, and stomach pain.

While disposing of wastewater on land is cheap and easy, it still creates waste and contaminants that can reach ground and surface water through percolation and runoff. The process will also emit greenhouse gases, making it less environmentally friendly.

For this reason, anaerobic digestion is an eco-friendly alternative for treating coffee processing wastewater, as it can remove the bulk of its organic load and suspended solids. With this process, the wastewater is fed into an oxygen-free machine built for this purpose. It’s then heated and as time passes, bacteria decompose its mass into sugars and organic acids. These organic acids are then converted to biogas.

This system requires less land, reduces bad odours and pathogens, and results in organic fertiliser being produced as an end product. 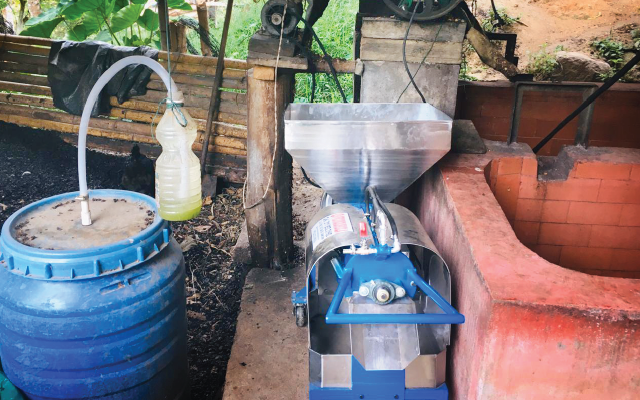 Coffee that is grown using long term monoculture (which is when a single crop is grown without rotation) and with full sun exposure, often experiences poor growth and low yields. The sun exposure and direct heat also dries the soil, reduces its density, and encourages erosion.

Continuous coffee cropping obstacles can often be attributed to poor quality soil, as it can cause toxic substances to accumulate, soil properties to deteriorate, pathogens to build up, and native microbiota to be disturbed. Without providing additional nutrients to compromised soil using fertiliser, coffee yields will remain low.

Research indicates that large amounts of organic fertiliser that can be recovered using anaerobic digestion. This can be used to replenish soil requiring fertilisation while reducing pollution at the same time.

To see what it looks like when farmers process aguas mieles themselves, I spoke to Andrés Perdomo Centeno, who is the Producer and Head of Asociación La Victoria, a collective of specialty coffee growers in Santa Maria, Huila, Colombia. His farm has partnered with exporter The Coffee Quest US, and local environmental organisation Fusamdes to neutralise the environmental impact of their farms.

Coffee Quest US Owner Stephen Levene explains that as local farmers share a watershed with a nearby national park, residual water often ends up in its rivers. They’ve provided farmers with ecowashers to convert wastewater into a paste that can be processed. Andrés believes that creating fertiliser from subproducts of washed processing tackles more than one environmental challenge at a time, by eliminating water pollution and recovering soil conditions.

Research shows that using organic fertiliser to improve soil properties can both increase yields and reduce the need for inorganic fertiliser, saving farmers money. As cascara and aguas mieles are rich in nutrients like nitrogen, phosphorus, potassium, and calcium, here’s how farmers transform it into fertiliser. 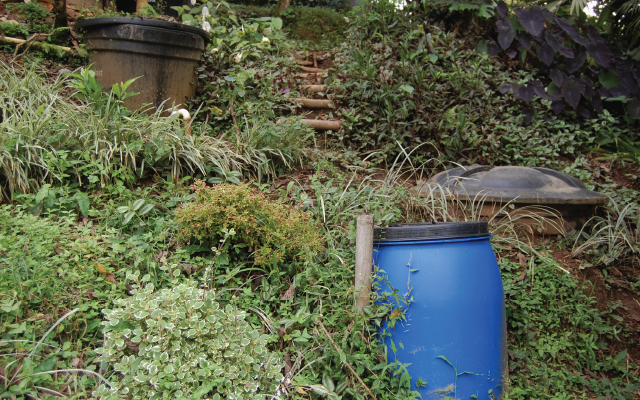 A tank collects the wastewater solids, which sink, and the more concentrated sugars, which float. Both will later be incorporated into fertiliser. Credit: Bosque Colibrí

As most producers don’t have access to large-scale equipment for anaerobic digestion, they rely on processes that use less technology. According to Gabriel Vélez, Technical Director of Coffee at Café de Santa Bárbara in Medellín, Colombia, many of these lower-tech processes work in the same way.

He explains that the aguas mieles from the first few washes get placed in a plastic or cement tank, where the more concentrated sugars float to the top, and solids sink to the bottom. Both are captured and mixed with cascara for composting. At this stage, some producers take the concentrated sugars and mix them with lime or ash to adjust the pH, creating foliar fertilisers.

The process can look different from one producer to the next. For Carlos Andrés Ossa, an Organic Producer and Coordinator of the Bosque Colibri Natural Reserve, there are two stages. First is a dehydration process, where he leaves a cascara mixture to dry for two weeks in a drainage pit.

As the mixture decomposes, he collects the aguas mieles that leach out. Once evaporation has left only solids behind, he reincorporates the cascara, adding rock flour to create a richer, more powerful mixture. The cleaner water left behind can then be further purified in a variety of ways, using anaerobic filtration, biodigesters, or plant-based biofilters.

“After three months, you’ll have a potent compost of black soil that you can reincorporate into the production cycle,” explains Carlos. “It’s the simplest way to add value to the subproducts traditionally thrown out.” 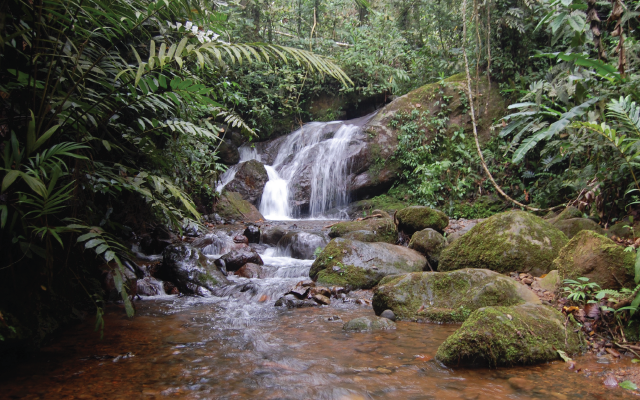 After purification, the wastewater from Carlos’ washing process is returned to the stream on his farm. Credit: Bosque Colibri

Carlos says that with the use of certain technologies, you can extract even more value from mucilage, and make the process more efficient. For example, ecomills and ecowashers can reduce water use from 40 litres per kilo to as little as half a litre.

The ecomill and ecowasher use the same washing technology, but the ecowasher is sold as a separate, portable unit, whereas the ecomill consists of several machines that de-pulp, ferment, and wash coffee in one integrated system.

With both machines, the beans are fermented and then transported through a rotating cylinder that scrapes off the mucilage. It then cleans the coffee using a small amount of water. Less water goes in and a smaller amount of concentrated wastewater comes out, which can then be dehydrated into a paste or a cake.

At Asociación La Victoria, this dehydrated paste is dried and made into compost or substrate for growing orchids. The fertiliser produced is then applied to coffee plants, as well as indigenous shade and fruit trees for reforestation purposes.

That’s a lot of added value – and reduced waste. So why aren’t more producers doing it? 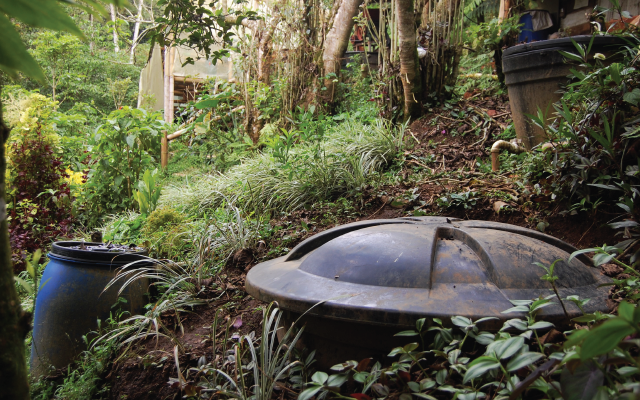 Covering The Costs of Eco-friendly Processes

Even basic, low-technology ways to process aguas mieles come at a cost in terms of equipment and labour. With coffee prices remaining at just over a dollar a pound, many producers are struggling to break even and feed their families – let alone invest in what’s necessary for processing aguas mieles on their farms.

This is where exporters and roasters can step in. It’s important for both parties to realise that there is a relationship between coffee quality and environmental sustainability and that by preserving good environmental conditions, favourable conditions can be created for high-quality coffee to be grown. It’s therefore in their best interests to support producers in their waste management endeavours.

This can be facilitated in many ways, but the simplest may be to ensure that producers are paid a fair price for their coffee. As Stephen says, “The first and most important thing for us is to pay the farmer as high a price as we can, based on quality. He adds that “we work with them to increase the value of their coffee, and once we’ve built a long-term relationship, then we try to work together on creating systems that are more ecologically sustainable.”

With climate change a current reality, and coffee production under threat, it’s not only producers who’ll have to deal with the consequences of reduced yields and quality. 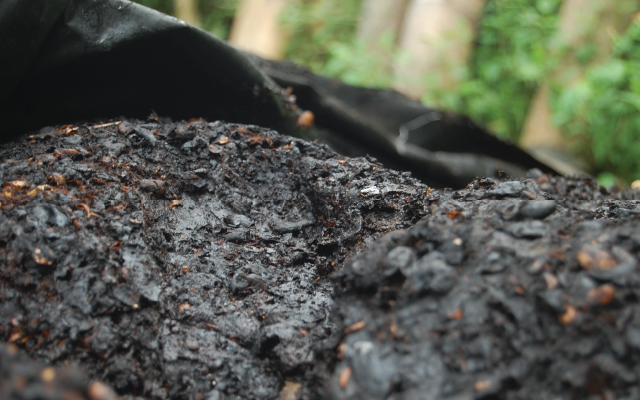 After four months in a compost pit, Carlos’ cascara-based fertiliser will be ready to use. Credit: Bosque Colibri

For members of the coffee supply chain, supporting producers in their waste processing efforts can be the first step in ensuring that coffee quality and integrity remains high – and that producers and the planet can afford to keep producing it for years to come.

Written by Kristen Lee Cronon. All quotes from Andrés Perdomo Centeno, Gabriel Vélez, and Carlos Andrés Ossa translated from Spanish by the writer. Feature photo caption: After four months in a compost pit, Carlos’ cascara-based fertiliser will be ready to use. Feature photo credit: Bosque Colibri