Manually brewing coffee at home has many advantages. It’s relatively inexpensive and easy to do, making it popular with those getting familiar with coffee for the first time. It’s also a brewing method that you can experiment with, making it equally popular with coffee professionals and coffee shops.

Whether you’re a home brewer wanting to know more about which device to invest in, or a barista looking to better understand the origins of the device you use every day, you’ll benefit from knowing the history of the following manual brewing devices.

Here’s how approaches to manual coffee brewing have changed over time, as well as the most popular devices that dominate the market today. 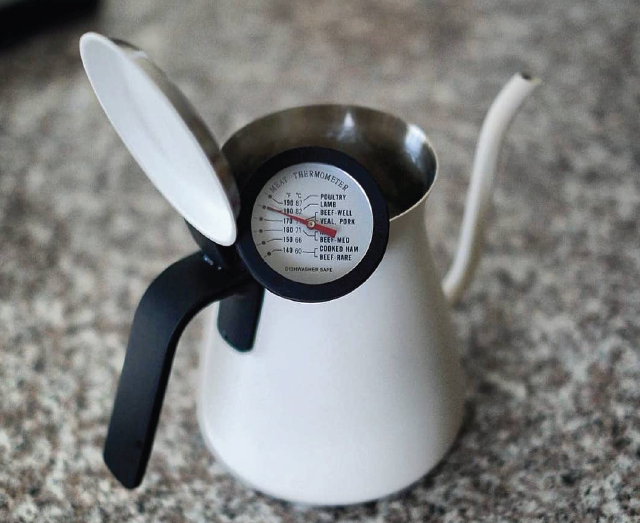 A kettle and thermometer, both used to brew coffee. Credit: Neil Soque

The Beginning of Manual Brewing

While there are no records that tell us exactly when or where people started consuming coffee, most agree that it originated in or near what’s now known as Ethiopia. According to Catherine M.Tucker’s book, Coffee Culture: Local Experiences, Global Connections, the first people to use coffee may have been ancestors of Ethiopia’s Oromo people, who according to early European travellers, mixed ground coffee cherries and beans with animal fat to create “long-lasting, calorically dense food balls”.

As the 15th century came to pass, Turkey’s Ottoman Empire expanded its reach to include parts of North Africa, Central and East Europe, and Asia. This allowed them to control the main trade routes between Asia, Africa, and Europe. It is here that they likely encountered coffee.

After being introduced to the drink, the Turks invented one of the earliest methods of manual brewing coffee. Roasted beans were ground using mortars, added to water, and then boiled in a pot called a cezve. Soon, this brewing method spread from the Sultan’s kitchen to wealthy homes across the Ottoman Empire, until the entire population was enjoying it.

While the Ottoman Turks attempted to keep a monopoly on coffee trade by banning its export, maintaining this proved impossible. The seed was smuggled out of the country and eventually enjoyed across Europe, where various European governments looked to African colonies to provide coffee to meet the growing consumer demand.

As colonial expansion spread, so did the reach of coffee, and by the 18th century, it was a popular beverage drunk across the world. While at this point it was only enjoyed by the wealthy elite, time – and the invention of affordable and easy to access manual brewing devices – would soon result in it being enjoyed by all.

You may also like Melitta, Chemex, & More: A History of Pour Over Coffee 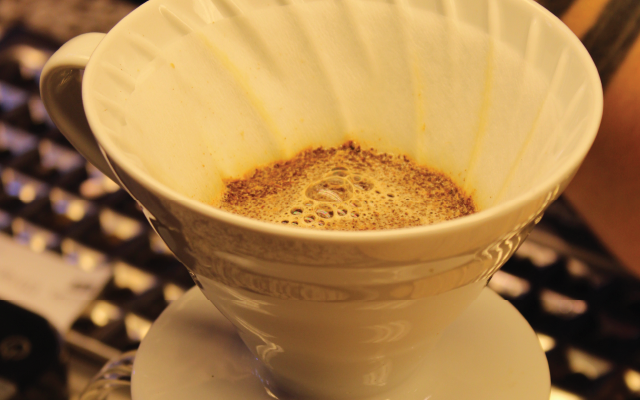 Coffee being brewed on a V60 at a coffee shop in Berlin, Germany. Credit: Julio Guevara

When coffee arrived in Europe, it was usually prepared by adding ground beans to water in a single pot and boiling it, which is similar to how the Turks enjoyed it. It entered the continent at the same time as the Industrial Revolution was taking place. At the time, most people drank beer or wine as a safer alternative to water. The introduction of coffee allowed people to participate in factory work unhampered by the usual side effects of inebriation.

In the 19th century, the drip method of preparation was developed in France and became dominant. With this method, ground coffee was placed in a container situated between two chambers of a pot, with heated water added to the top chamber. It then percolated or dripped down through the coffee into the bottom serving receptacle.

It was in this century that domestic preparation of coffee took off in earnest. In 1908, a German woman named Amalie Auguste Melitta Bentz invented the first coffee filter, which allowed her to brew coffee without sediments and with a clearer taste. She patented her paper filter idea and established the Melitta company in the same year.

Melitta and her husband presented her filters at the 1909 Leipzig Trade Fair, where it was successful. After some adjustments were made, a cone-shaped filter was created, which became popular due to its improved design. 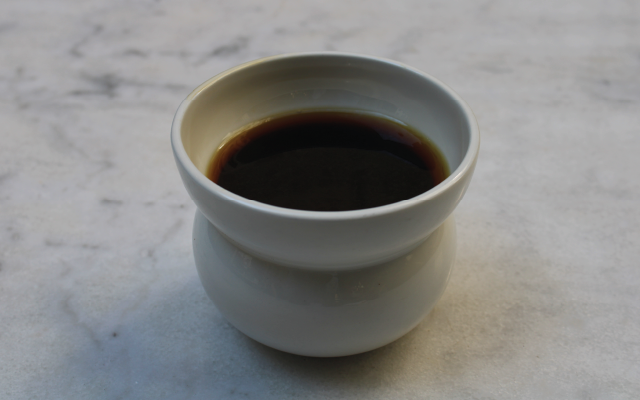 As coffee spread its reach across Europe, France and Germany weren’t the only countries to dabble with creating manual brewing methods. While the 18th century saw large-scale mechanical espresso machines being patented, Italy’s 19th-century economic boom saw locals demanding ways to enjoy a similar quality coffee, efficiently, and at home.

It was in 1933 that Alfonso Bialetti invented the Moka Pot. Designed for use on a stove, the pot had three parts. It passed boiling water that was pressurised by steam through a funnel and ground coffee into the top chamber.

It was an instant success and is still produced by Bialetti today, even as the company experiences increased competition from coffee pod machines and other devices.

You may also like How The Moka Pot Influenced Coffee Consumption 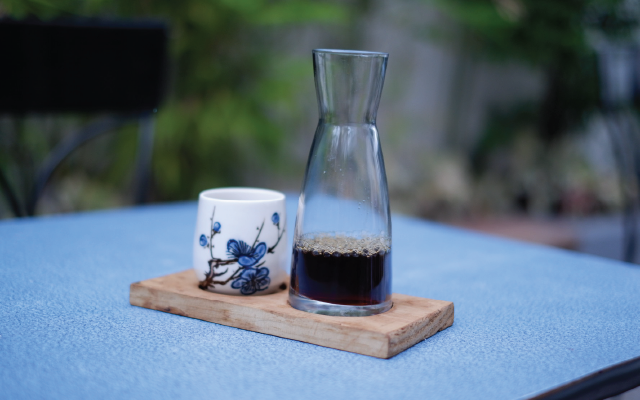 A coffee carafe and cup on a table. Credit: Neil Soque

Several years before Alfonso Bialetti invented the Moka Pot, two Frenchmen were creating an early version of the French Press. In 1852, Mayer and Deforge patented a design of this type of brewer, which differed significantly to the one we currently use, as it lacked a seal inside the carafe.

It was in 1929 that two Italians, Attilio Calimani and Giulio Moneta, patented a design for the coffee maker resembling the French Press that we know today. This version included a seal around the plunger disks, keeping them flush with the receptacle and making plunging more efficient.

It was only in 1958 that the most popular design of this brewer was patented, and it was done by a Swiss man called Faliero Bondanini. As it was manufactured in France, it grew in popularity there and was called the Chambord.

This particular version was a total immersion device, which means that the ground coffee is in full contact with hot water for around four minutes when the plunger is pushed down. During pouring, the filter keeps the grinds in the carafe, creating a clean and full-bodied cup of coffee.

While no single company dominates production of the device, the Danish tableware and kitchenware company Bodum has been manufacturing their version of it since 1974, with huge success. Their version is called the Bistro and is available from retailers around the world. 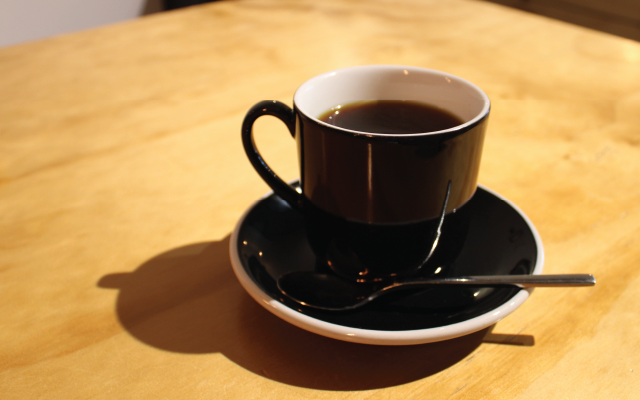 In 1941, German chemist and inventor Peter J. Schlumbohm created the Chemex, which was one of many inventions he created in his lifetime. Having renounced his place in his family’s chemical business, his years spent earning a PhD in Chemistry at the University of Berlin formed the foundation for his future inventions.

He first exhibited a prototype of the Chemex coffee maker at the New York World’s Fair in 1939 and formed the Chemex Corporation two years later to manufacture and market it.

Schlumbohm considered the appearance of his inventions to be very important, and his educational influence is apparent in the Chemex’s resembling chemical laboratory apparatus. Its style resembled that of Modernist designers, and it was endorsed by the Museum of Modern Art.

Using a pour over method, the Chemex works by passing water through a bed of coffee and a paper filter. As the filters are usually 20-30% heavier than typical filters, they retain more suspended oils during brewing and keep out more solids, resulting in a cleaner cup of coffee. 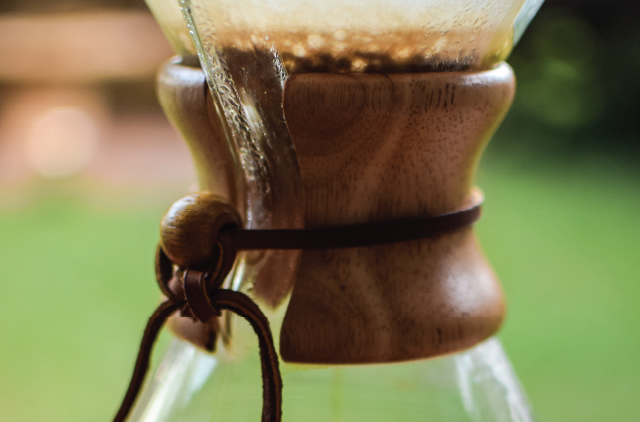 Kalita Co. is a Japanese company that has been producing coffee equipment and paper filters since the fifties. They created the Kalita Wave series of coffee drippers in 2010. The device looks similar to the V60 at first sight but has several key differences.

Unlike a V60, the Kalita Wave has a flat bottom with three extraction holes, which eliminates any channelling of water in the coffee bed and slows down the water’s flow through the coffee grounds, for a crisp cup of coffee. The dripper has little contact with the filter, keeping the temperature consistent and dispersing the water evenly.

Thanks to its flat bottom, water flow is restricted in a more stable and predictable way than with other manual drippers. This creates a flatter bed of grounds, for a more even extraction of flavour.

Available in metal, the Kalita Wave is stove-top friendly (like the Moka Pot). It is also available in glass and ceramic. 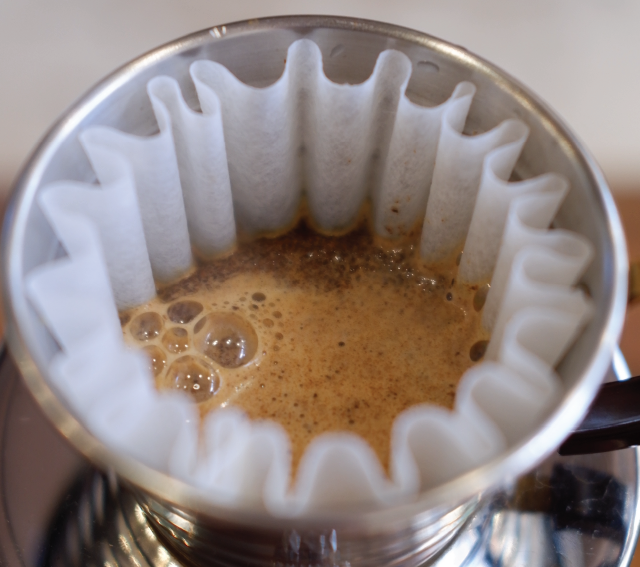 Coffee being brewed on a Kalita Wave. Credit: Neil Soque

The Chemex isn’t the only manual brewing device to originate from a chemistry background. The Hario V60 was created by a Tokyo company that produced and sold physical and chemical-use glass products. It’s a relative latecomer to the manual brewing device industry, having only been invented in 2015, and it gets its name from the 60º angle of its cone.

The V60 has three qualities that impact its brewing ability. Firstly, its cone shape lets the water poured over flow towards its centre, for longer contact time with the grounds. Secondly, its single hole means that the flavour of the coffee can be altered by changing the speed at which the water is poured in. Finally, the cone has spiral ribs on the inside, which allows more air to escape and maximises the expansion of the coffee grounds.

The V60 was first introduced in ceramic and glass, then plastic, and finally metal. It was also released in a copper version, for higher thermal conductivity. This allows for better retention of heat and therefore better extraction. 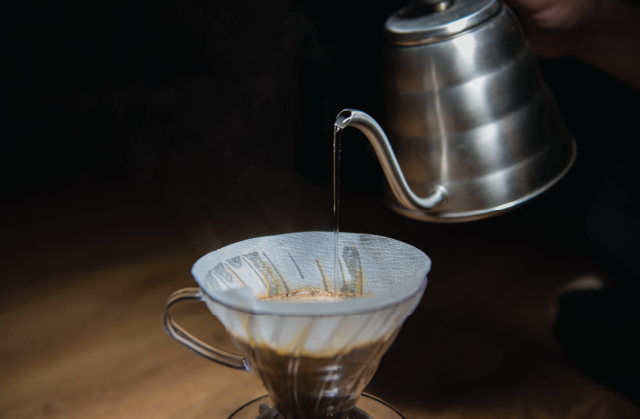 The AeroPress was created by engineer Alan Adler in 2005 and is a notable brewer to come out of the USA. Made of polycarbonate, it contains no BPAs and phthalates and features its brand name lettering in gold, for easier detection of possible counterfeits.

Adler’s invention was created out of a need for a less bitter cup of coffee. He realised that for this to happen, brewing time would need to be shortened. He created a closed chamber to increase the pressure required during brewing, which also resulted in a much faster brewing time, compared to most manual devices on the market.

Being compact, portable, and easy to clean, the AeroPress has carved out its own niche in the industry. It now has its own championship too, with the World AeroPress Championship drawing entries from across the world every year. 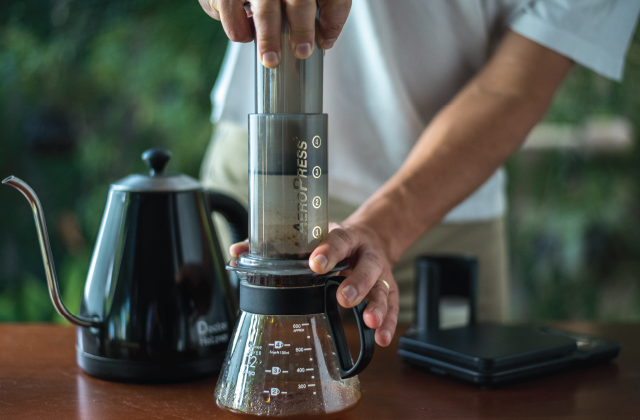 Manual methods have opened a path towards more experimentation for home brewers and coffee shops alike. For both groups, there are no hard or fast rules for how they’re used to brew coffee.

Knowing how each one was created and works will not only allow you to better enjoy the beverage but also to respect the efforts that have been put into creating each device – whether you’re enjoying it at home or using it to serve others.

Enjoyed this? Then Read Everything You Need to Know to Brew Great Pour Over Coffee