Discover The History of The Coffee Roaster

Transforming green beans into the aromatic coffee we love depends on one vital piece of equipment – the coffee roaster.

But how much do you know about the history of the coffee roaster? Why is it designed in the way it is, and how has it changed throughout history? Read on to learn more about how the roaster was developed. 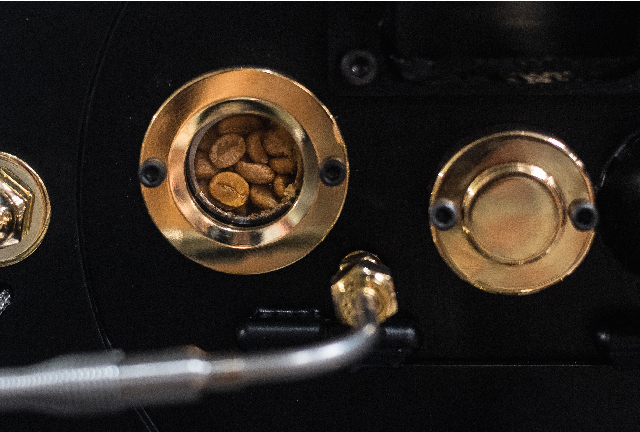 Coffee has a long, rich history. Preparing roasted coffee beans to make a drink is thought to date back centuries to Africa and the Middle East. The Ottoman Empire and European colonisation then took the drink around the world.

The first known roasting tools were thin, perforated pans that were used over an open flame. The roaster would use spoons to move the beans around and ensure even roasting.

Only a small amount of beans could be roasted at a time, and the stirring meant that the roaster had to pay close attention throughout the whole process. 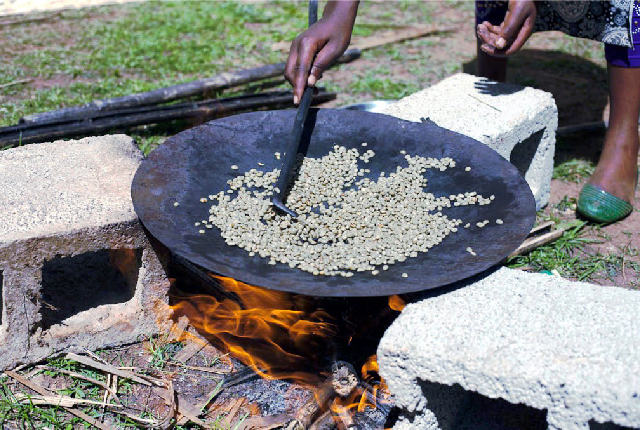 Coffee roasted in a pan in Ethiopia. Credit: Charles Haynes via Wikimedia, CC BY 2.0

Raimond Feil is an experienced coffee roaster and the author of Coffee Roasting Made Simple. He tells me about his experience of roasting coffee in a pan. “It was a pretty smoky and dusty process, with lots of silverskins flying around. And as expected, all the roasts were uneven and uncontrolled.”

With such a messy process and inconsistent results, it’s understandable that coffee lovers started to experiment with new methods. 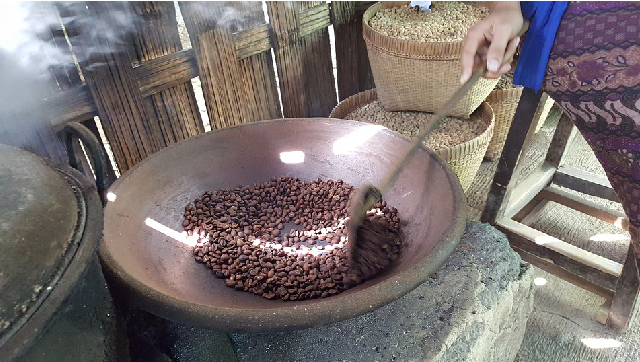 It’s reported that cylindrical roasters originated in Grand Cairo in the 17th century. These devices enclosed the beans, allowing heat to develop inside the chamber. They also featured hand cranks to move the beans around consistently while the device was held over an open flame.

This design also meant reduced fumes, which made roasting coffee more comfortable. Cylindrical roasters were tweaked and adapted through the years, but the central concept remained the same. The design spread throughout Europe and the Americas as colonialism grew the coffee industry. 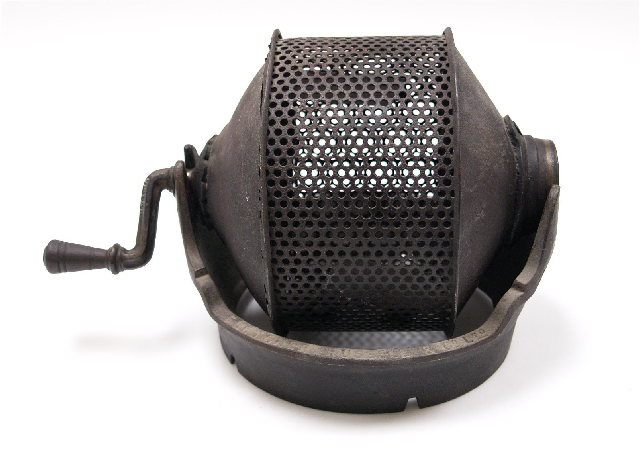 An enclosed coffee roaster with a crank. Credit: Auckland Museum via Wikimedia, CC BY 4.0

Coffee roasting was no exception to industrialisation. In the 19th century, various patents were awarded in the US and Europe for commercial roasters, although many people continued to roast their own small batches at home.

Many early industrial roasters were simply large cylinders placed over a heat source. Until the introduction of gas supplies throughout urban centres, wood or coal was used. But this gave the coffee a smoky flavour, so when natural gas became available, it soon became the roaster’s preferred heat source.

Richard Evans patented the first large-scale coffee roaster in  the UK in 1824. According to The Curious Barista’s Guide to Coffee, it allowed users to up-end the whole cylinder to empty it, and also featured an “examiner” that allowed samples to be taken throughout the roast.

The same book reports that in 1846, in Boston, James Carter patented a “pull out” roaster. This was an iron drum that was fixed into a furnace. The entire cylinder had to be pulled from the furnace and doors on the drum walls opened to allow the coffee to be dumped onto the floor or into trays to cool. This was an inefficient and dangerous method. 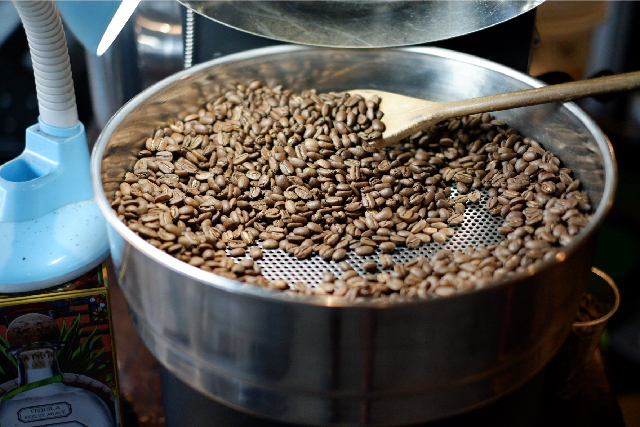 In 1864, in the US, Jabez Burns was granted a patent for a commercial coffee roaster. Burns’s design was an enclosed cylinder encased in brickwork. It featured an opening mechanism to empty the beans without removing the cylinder from the flame and a double screw inside the cylinder that would evenly distribute the beans. These innovations made the roast more consistent and the process less dangerous.

Burns’ company would later add a cooling tray to the front of the roaster with a fan mounted below to draw air through the beans. These features paved the way for the modern coffee roaster.

In 1868, in Germany, Alexius van Gulpen joined forces with Theodor von Gimborn and Johann Heinrich Lensing to make the company that would go on to become Probat. They filed a patent for the Kaffeeschnellröster (“rapid coffee roaster”) in 1880, which the company says was critical to the development of the drum roaster. 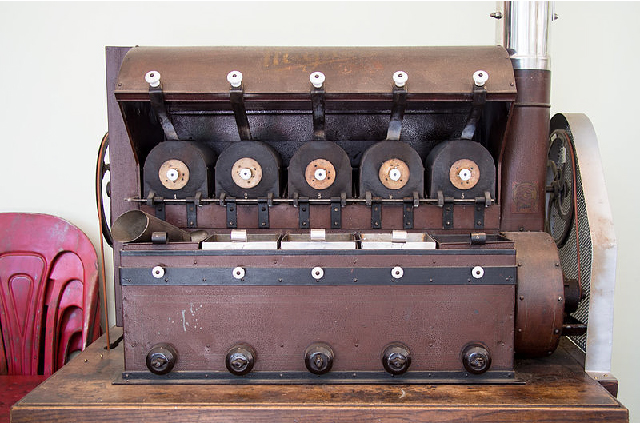 The Impact of Electricity

As electricity grew more accessible at the turn of the 20th century, the coffee roasting industry adapted.

Electric motors meant that roasting became much less labor-intensive. And because electric heat is more predictable than open flames, the roast was more consistent, as well as less dangerous. For the first time, roasters were able to control exposure to heat with some accuracy and had better ability to replicate conditions. 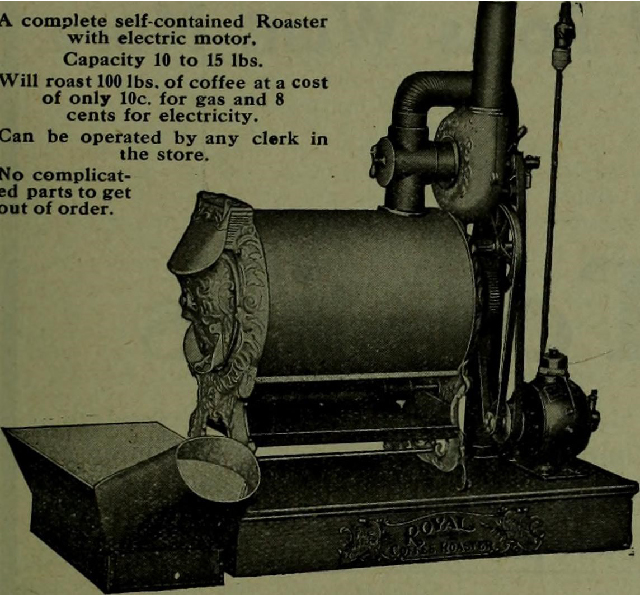 A 1910 advertisement for an electric motor coffee roaster. Credit: Fisher, University of Toronto via Flickr

Drum roasters based on 19th century patents are still the roaster design of choice today. But in the 1970s, fluid-bed or hot-air roasters entered the scene.

In a fluid-bed roaster, heated air is forced through a screen under the coffee beans with enough strength to lift the beans. Heat is transferred to the beans as they tumble around. Michael Sivetz, an American chemical engineer, patented the design in 1976.

Roasters have largely dismissed fluid-bed roasters as not providing the same quality of roast, which is attributed to them using just convection, rather than the combination of convection, conduction, and radiation created in a drum roaster.

Learn more in Coffee Roasting Guide: What Is Airflow & How Can You Control It? 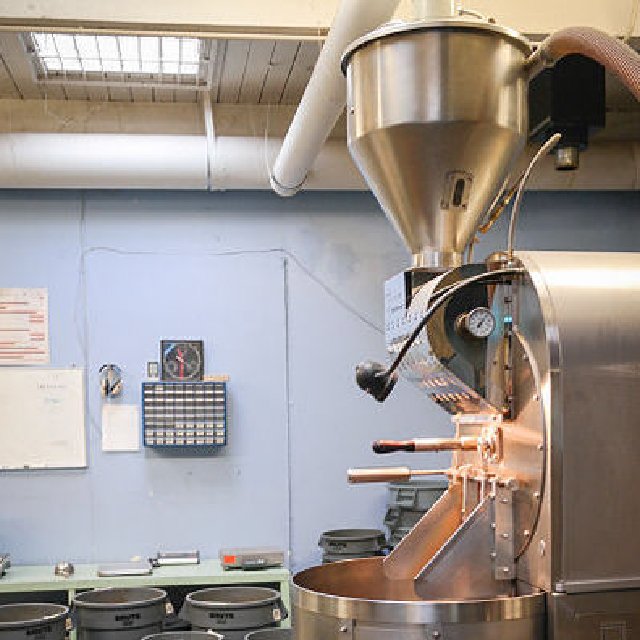 Modern coffee roasting is informed by better understanding of coffee chemistry and what changes happen during the process. Roasters are better equipped to measure variables and analyse why a roast is successful or not. With technologies such as digital temperature reading and profiling software they can be more efficient and consistent than ever before.

But these innovations are dependant on core inventions from over a century ago. Contemporary additions can help us better control the roast, but they are essentially fine tuning of the 19th century drum roaster.

Learn more in Roaster Basics: An Explanation of Roast Graphs 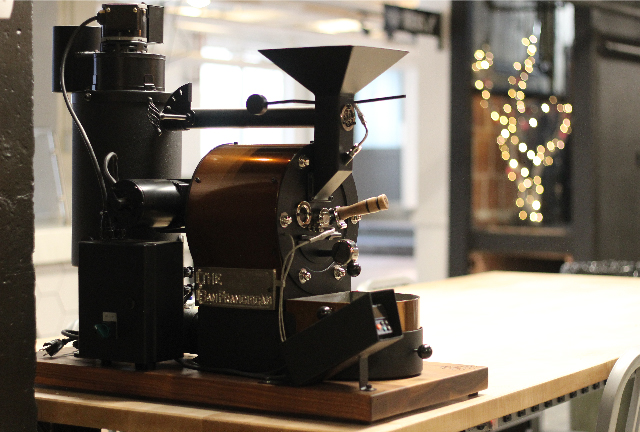 Roasting equipment has evolved and improved thanks to the efforts of many people and companies through the decades. Without some experimentation and trial and error, we wouldn’t have the wide range of delicious roast profiles we enjoy today.

Seeing how far we’ve come, isn’t it exciting to consider how much further technology can take us in coffee roasting?

Enjoyed this? You may also like Melitta, Chemex, & More: A History of Pour Over Coffee