The History of The AeroPress, From Concept to Championships

The AeroPress was not an overnight smash hit. It didn’t look like a coffee brewing device. It was produced by a sports toy manufacturer best-known not for their coffee but for their flying disc.

Yet somehow, today, the AeroPress is one of the world’s most iconic coffee-brewing methods; the tool of a world coffee championship, the World AeroPress Championship (W. A. C.); and even the subject of its own movie, AeroPress Movie.

How did this happen? We reached out to Alan Adler, AeroPress designer and President of AeroPress, Inc., to hear his opinion. 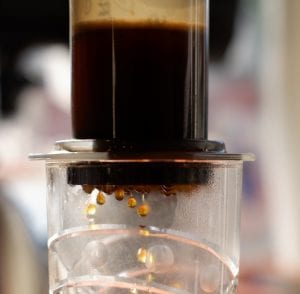 The Origins of The AeroPress

A small, two-tubed device, the AeroPress quickly brews a full-bodied coffee by allowing the user to push the water through the puck. Unlike pour over devices, it’s inspired by espresso machine technology – except electricity and levers are replaced by human pressure.

It also has similarities to the French press, although it’s become embraced by the specialty coffee industry in a way that the humble French press has yet to achieve. What’s more, the brew time (and recommended water temperature) is significantly shorter with the AeroPress.

In other words, while the AeroPress is a common sight nowadays, it was truly something out of the ordinary when it first appeared back in 2005. Alan Adler approached creating it like the engineer that he is, starting off with the problem (he wanted reduced bitterness in his daily coffee) and from there finding the solution (reduced brew time).

In order to reduce the brew time, he realised that he needed to take advantage of pressure. A closed chamber increased the pressure from the “push” sufficiently that Alan was then able to brew his coffee faster. (Of course, today, you’ll find a wide range of AeroPress recipes – some with longer brew times than others!)

Numerous prototypes later and Alan Adler had his AeroPress. His small, family-run business (which still only has a dozen or so employees) soon began producing it and demonstrating it at trade shows. 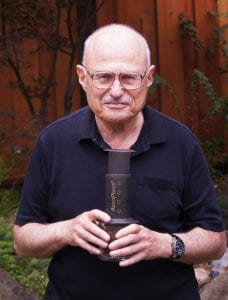 Winning Over The Coffee Industry

Many in the specialty coffee industry responded sceptically, dismissing the AeroPress as a gadget device from a toy maker rather than a revolutionary new brewer.

But over time, this started to change. Alan responded to the raised eyebrows with brewed coffee samples and the news began to spread. The proof of the AeroPress’ quality was, after all, in the coffee cup.

Yet there are many coffee brewing devices out there. How did the AeroPress achieve such remarkable popularity?

Alan says, “Coffee is a global phenomenon. And various brewing methods have gone global. It helped that the AeroPress brews a very tasty cup in one minute, is self-cleaning, portable, inexpensive and can be used many different ways.”

And maybe there was something else behind the AeroPress’ surge in popularity – the very same thing, perhaps, that led to the World AeroPress Championship. I’m talking about the ability to experiment.

Brew time, push time, coffee dose, coffee:water ratio, water temperature, and even whether or not you invert the brewer; there is a wealth of ways to play with the AeroPress and so enhance different characteristics in your brewed coffee.

Discover more in: AeroPress Coffee Guide: How to Brew For Different Flavor Profiles 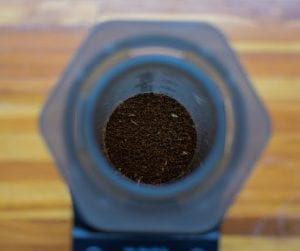 Champion of The World

But in 2008, a new one appeared – an irreverent, playful one that never expected to be taken seriously. The first ever World AeroPress Championship (W.A.C.) was held in Oslo and, despite the grand name, had just three competitors. It was organised by Tim Varney (who still runs the event today, along with Tim Williams) and Tim Wendelboe.

But – much like the AeroPress itself – the competition has become a popular and indispensable part of the coffee championship calendar. In 2018, over 3,157 people from 61 countries competed, watched by a grand total of 68,265 eager spectators.

“Obviously, an AeroPress can be used many ways. Competitors invent new ways and fine-tune existing ways. It’s not likely that a competition could develop around a push-button automatic brewer,” says Alan.

He considers the W.A.C. to be “the people’s championship”, one that anyone can compete in, regardless of their resources or access to green coffee. It’s one that rewards creativity and experimentation – so long, of course, as that creativity results in better coffee. 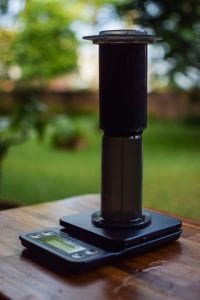 What’s Next For The AeroPress?

The AeroPress has gone from underdog to a giant of the coffee industry. Yet while its success has rocketed, little about the device has changed. It’s now a transparent black as opposed to clear plastic, but if it weren’t for that, you would be hard-pressed to spot the differences between one from 2006 and one from 2019.

Yet is something new on the horizon? “A more portable version is coming soon,” hints Alan, while not giving any further details.

As for the W.A.C., Alan is optimistic about its future growth. “We strive to enhance the enjoyment of the participants. That’s our highest priority. This year’s event was extended from one day to two days and the participants all loved the opportunity to socialise. More enjoyment will be added in 2019,” he says.

Enjoyed this? Check out 5 AeroPress Lessons I Learned From 4 Champions – And Their Recipes

Please note: This article has been sponsored by AeroPress, Inc.