Taking a Look at Brazil’s Specialty Coffee Industry During ICW

Welcome to Brazil, the world’s largest coffee producer. What happens here shapes the coffee industry around the globe.

So it’s no surprise that 20,000 people turned up to Brazil’s Semana Internacional do Café/International Coffee Week (ICW), held at the end of 2018 (the 2019 edition has already been announced and will run from November 20th to 22nd in Belo Horizonte). Here, they experienced:

And more. Let’s explore what happened. 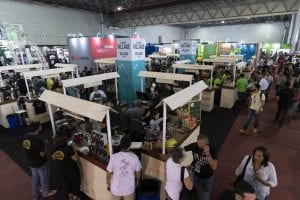 Caio Alonso Fontes is the director of Café Editora, one of the event’s organizers. He tells me that International Coffee Week is a “meeting of the [coffee] chain and all of the chain’s links, where we are able to create connections between people, and these connections have the objectives of generating business, providing education, and promoting Brazilian coffees.” [Translated from Portuguese.]

Companies from across the different sectors of the coffee industry attended the event. Reymar Coutinho de Andrade, President of Pinhalense, a manufacturer of coffee processing equipment, tells me that the event “was a turning point for the coffee-growing culture in Brazil, especially because it addressed some important subjects [and hosted] the Championships, which brought a new public to Brazil and allowed this public to know a little more about the properties of the [Brazilian] coffees.”

But what exactly left the attendees and exhibitors so impressed? 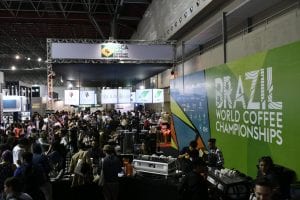 Cuppings were a key part of ICW 2018, showcasing coffees from single estate farms like Daterra in the Cerrado Mineiro region; associations such as IWCA Brazil, the Brazilian branch of the International Women’s Coffee Alliance; coffee groups such as 3Corações; regional flavors, and more (see the full list here).

Then you had the many, many coffee cuppings held by producers, cooperatives, and roasters at their own booths. In total, ICW offered visitors more than 200 cupping sessions.

Agnieszka Rojewska, 2018 World Barista Champion and winner of multiple other coffee competitions over the years, was at ICW to compete in the World Latte Art Championships. She tells me, “When you are here and you are able to try different types of Brazilian coffees, you can actually change your perspective.

“Because we basically think that coffee from Brazil is chocolate, hazelnut, bitter, and it’s not very balanced. But as for now, I tried a lot of fruity coffees, I tried a lot of complex coffees with complex acidity, and this is mind-opening for me.”

She was not the only one to have this experience. Andre says, “I came here with a mix of expectations because, from a specialty coffee point of view, we look at Brazil as just being the biggest coffee-producing country in the world. We see it more like quantity than quality.

“But during the last couple of days, I was truly impressed. So of course, you still have a lot of coffee, but at the same time [Brazilians] improved massively the quality. I had the great pleasure to taste some coffees and I wouldn’t have bet that they came from Brazil… [they were] super fruity… One especially, it seemed like a Geisha, but it’s not a Geisha, so the coffee farmers here are doing an amazing job.” 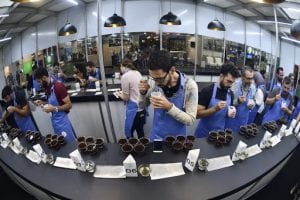 Cupping samples for Coffee Of The Year. Credit: Nereu Jr / NITRO for ICW

But the event wasn’t just about displaying the best of the coffee industry. It was also about competing for that coveted position.

ICW hosted four of the official world championships from World Coffee Events, with representatives from over 60 countries in attendance.

Agnieszka tells me, “What is a great opportunity for me is to actually compete in an origin country, which is much more different because here you can actually meet producers.

Let’s take a look at the four championships and who walked away with the titles.

Across three rounds (preliminary, semi-finals, and finals), competitors demonstrated their mastery with free-pour and designer latte art patterns. And the winners?

In this championship, the best manually brewed coffee took the prize. Presentations and coffees were evaluated by three sensory judges and a head judge, who are evaluating – among other things – uniformity and overall workflow. The winners were: 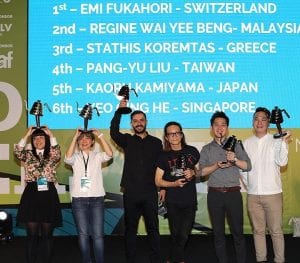 Competitors demonstrated their ability to distinguish between different coffees through triangulations, in which one of three cups was different from the others. The goal was to identify the odd one, and the one who correctly identifies the most cups won. The results were as follows:

Baristas and mixologists competed to create the best alcoholic coffee cocktails. In the final round, competitors had to craft four drinks: two identical hot/warm or cold drinks and two hot/warm Irish Coffees. They were evaluated on the flavor, visual appearance, and technical skills demonstrated. The six finalists were:

She adds, “My [competition] coffee is from Brazil. The one I’m competing with is from Daterra, from the Cerrado Region.” In other words, not only did Brazil host the World Barista Championship, but a Brazilian coffee helped Emi to win it. 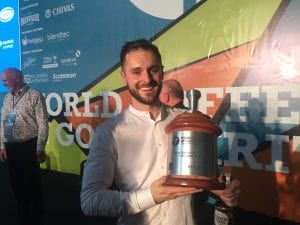 It’s not just baristas and cup tasters who were competing, however: so too were Brazil’s producers.

Finally, these samples were assessed blind by a popular jury who then voted for their favorite. 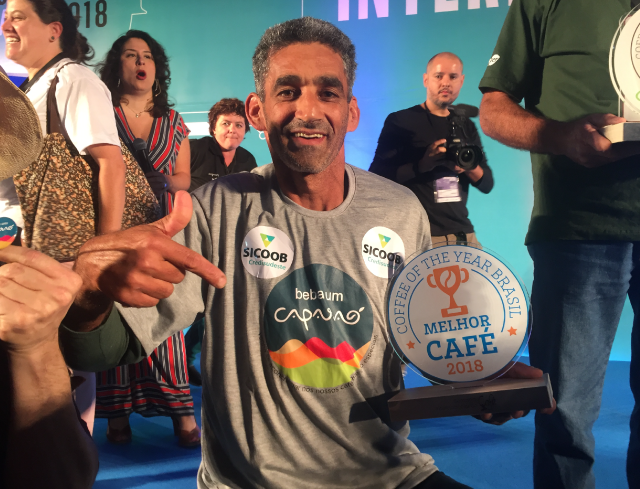 The rules are simple: all lots must be cupped at 84 points or above by SCA standards. The five best 84+ coffees for each category are the champions. The winners receive premium prices for these coffees, which the BSCA then sells to associated coffee shops, roasteries and exporters.

Launched for the first time in 2018 and promoted by 3Corações in partnership with the BSCA, this competition awards female producers of exceptional micro lots. Lots must range between three to ten 60-kilo bags in size.

The contest is part of Projeto Florada, which translates to project in bloom. This is an initiative designed to increase the visibility of women in coffee production and also support female producers through training and meetings. The contest is the second to last stage: get their coffees awarded and sold for premium prices. 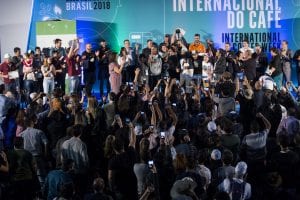 The winners are announced for Coffee of The Year. Credit: Bruno Correa / NITRO for ICW

Education is one of the key themes at ICW, the team at Café Editora tells me. And this year, it hosted two sustainability seminars: the Global Coffee Sustainability Conference and the Sustainable Coffee Forum.

Mariana Proença is the Director of Content at Café Editora and one of the event organizers. She tells me, “The Global Coffee Sustainability Conference (GCSC) is conducted by the Global Coffee Platform and, for the first time, it took place in a producing country. It was a public success, with 350 attendees from 16 countries.

“The event has brought together important players within the coffee sector to discuss sustainability through the whole production chain.” [Translated from Portuguese.]

As for the Sustainable Coffee Forum, she says, “The forum, conducted November 9th in the Great Auditorium of the International Coffee Week, has this objective: to bring together top professionals in the sector to discuss the actions already taken in coffee production and the next steps for the sustainable development for future generations.

“It’s promoted by the ICW organizers, who nominate the main speakers for the event, based on their technical expertise. This year’s theme was Trends and Challenges for Coffee Production.” 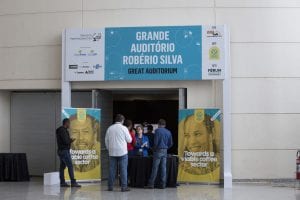 Numerous roasting courses, sensory skills workshops, and more were held during the event. Caio tells me, “There were more than 30 parallel events happening throughout the week… more than 190 hours of speeches and workshops happened during the three days. So, it’s a very nice amount of information, of content, of training.” [Translated from Portuguese.]

Here are some of the highlights:

SCA Certified Courses: For those who wanted the official SCA certification for basic sensory skills, barista skills, and brewing, six authorized trainers conducted these courses at the event.

Roasting Courses: Sponsored and organized by Atilla Coffee Roasters, there were seven different courses for roasters. Topics included the challenges of being a micro roaster, the science behind coffee roasting, roasting Robusta vs roasting Arabica, roast flavors, global roasting trends, and more.

Fermentation Techniques: Edwin Enrique Noreña Garcia has been a coffee producer in Colombia for more than 15 years, as well as an agroindustrial engineer. He led a course spanning everything from harvesting to storage, with a focus throughout on the different types of coffee fermentation and their results in the cup.

Workshop: Managing a Coffee Shop: Isabela Raposeiras is the owner, roaster, and barista behind the Coffee Lab, a café-roastery in São Paulo. She addressed topics related to the challenges of opening and running a coffee shop, such as reasons to open a coffee shop, how to select your suppliers, and “cents that are worth millions”. 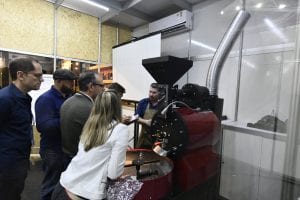 Attendees gather around to learn about different roasting techniques for Robusta and Arabica. Credit: Nereu Jr / NITRO for ICW

And last, but certainly not least, let’s take a look at all the equipment that was on display at ICW. Mariana tells me, “There were dozens of products launched during the event. Each one of the 160 exhibitors brought innovations to present to the public.”

The product that stood out the most to me was the CoffeeClass: a prototype of a machine that can evaluate coffee quality by optic analysis of the grounds. Yes, you read that right: it can identify coffee quality from ground roasted coffee: no hot water, no Q graders needed. It’s just a matter of a microscope and Artificial Intelligence.

The aim is to improve efficiency when analysing coffee quality. The CoffeeClass works by interpreting patterns in amplified images of roasted and ground coffee. It then compares them to a data set of patterns that has been correlated with coffee quality.

To achieve this, the machine applies reflectance and fluorescence, which use differentiated light sources under the coffee sample to identify those compounds linked to the beverage’s quality.

During the event, the state-owned Brazilian Agricultural Research Corporation (EMBRAPA) and Brazilian Coffee Industry Association (ABIC) signed a contract to join forces and make this prototype available in the market in the next years.

ICW: A Space For Collaboration

ICW brought coffee professionals from around the world together to discuss some of the industry’s most pressing sustainability issues, celebrate quality coffee lots from a range of producers, discover the latest technology, and more.

As Sasa Sestic, former World Barista Champion, entrepreneur, and the person behind Project Origin and ONA Coffee, says looking back at the event: “We can learn from each other. I guess we all work for the same goal. We want to create beautiful coffee, beautiful opportunities for everyone: for farmers, for roasters, for cuppers… and this is the unique opportunity that we can all learn and grow together.”

Vanusia Nogueira, Executive Director of the BSCA, had a similar impression. “Everything we achieved at ICW 2018 was a dream very well dreamed,” she says, “which has shown us that, with strength, determination and professionalism, we can reach our goals.”

Please note: This article has been sponsored by International Coffee Week.