Melitta, Chemex, & More: A History of Pour Over Coffee

Step into any specialty coffee shop and you’ll probably see at least one pour over coffee device. The V60 and Chemex have been around for decades but are now icons of third wave coffee.

But how did the pour over develop and why is this simple method so beloved by the specialty coffee movement? Read on for the history of pour over coffee.

You may also like Discovering The History of The Espresso Machine at MUMAC, Italy 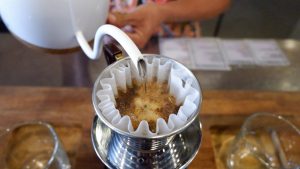 Where It All Began

For centuries, people around the world made coffee by heating ground coffee in a pot with water, as in the Saudi Arabian and Turkish traditions. Then the percolator, which brews coffee by continually cycling the boiling brew through the grounds, was invented around 1810. It became a standard brewing method in Europe. The espresso machine came soon after.

But in the 1900s, a German woman named Amalie Auguste Melitta Bentz was dissatisfied with the taste of percolator coffee and the grounds left behind in her cup. She started to prototype alternative brewing methods and came up with a technique using blotting paper and a can that she punctured with a nail.

The resulting brew was less bitter than percolator coffee and satisfyingly free of grounds. In June 1908, Amalie filed a patent for the paper filter and the Melitta company was established. 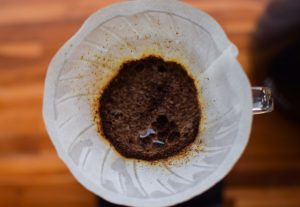 Amalie and her husband Hugo presented their filters at the Leipzig Trade Fair in 1909 and their product gained huge success. In the 1930s, Melitta introduced the cone-shaped filters that we are familiar with today. By producing a larger area for extraction, this design improved the quality of coffee in each cup.

Of course, they also developed something more efficient than a can to hold the filters. They created a simple cone-shaped dripper device that sits on top of a cup or jug. The first commercially available dripper reportedly had eight holes on the bottom, but changed to a single hole in the 1960s.

Cloth coffee filters had been used in Latin America for many years before, but the invention and commercialization of the paper filter was a huge innovation in how we make coffee. Melitta is now a global company and its filters and dripper devices can be found in kitchens and cafés around the world. 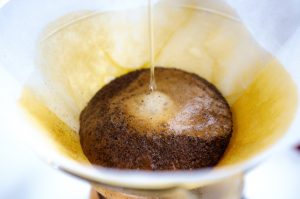 The Development of The Pour Over

Other manufacturers have created variations on the pour over device and its filters for almost as long as Melitta has been around.

The iconic glass Chemex coffeemaker was invented by German chemist Peter Schlumbohm in 1941. Peter Schlumbohm was reportedly an eccentric character with a focus on improving the efficiency and enjoyment of everyday objects. He filed over 300 patents, including designs for cocktail shakers and cars.

His chemistry background provided him with a solid understanding of how coffee extracts. He drew on this to create thick paper filters that the manufacturers say keep bitter elements, oils, and grounds out of your cup. 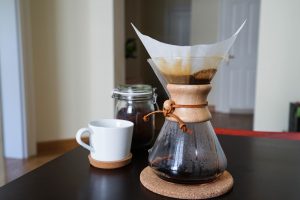 A Chemex coffeemaker in use. Credit: Andreas Palmer

In 1959, the distinctive hourglass Chemex coffeemaker was declared one of the best designs of modern times. But it’s also a very practical device.

The wooden collar around the neck of the carafe makes it possible to handle the hot glass and the leather tie prevents slippage. The glass vessel is based on laboratory glassware to avoid absorption of odors or chemical residues that might affect future brews.

Find out more in Chemex – The History & Brewing Guide 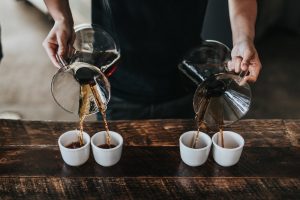 Pouring four cups of pour over coffee at once. Credit: Nate Dumlao

There have also been several popular Japanese versions of the pour over device. Hario was founded in Tokyo in 1921 and started out producing glass products for chemical use. Its V60 device was developed to improve on existing filter holders.

Like other devices, the conical dripper sits on top of a cup or carafe and holds a paper filter. But it’s less simple than it may appear.

The cone is at a 60º angle. This allows water to flow to the centre of the grounds, extending the contact time. It also features a large single hole, where similar devices have several small ones. This reduces pooling. And the V60 features spiral ribs that allow air to escape, thereby maximizing the expansion of the coffee grounds. 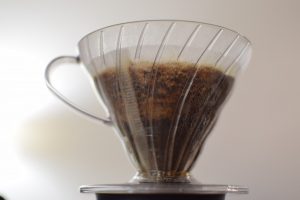 The Kalita Wave is another Japanese invention. It features a flat bottom with three holes, which eliminates any channelling of water in the coffee bed and creates an extremely crisp cup. The dripper is also designed to create minimal contact with the filter, allowing for consistency in temperature and even dispersion of water.

And paper filters aren’t the only option with pour over coffee. The chorreador is a Costa Rican brewing method that uses a wooden stand and a cloth filter. It was used long before Amalie Auguste Melitta Bentz pioneered her invention. Cloth filters are reusable and produce less waste than paper ones. The coffee sock is a version that caters to the specialty market. 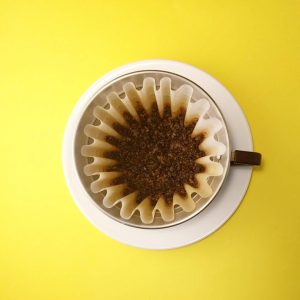 The Specialty Coffee Embrace of The Pour Over

The Chemex and other pour over devices were successful in the mid-century but largely fell out of vogue until their rediscovery by specialty coffee pioneers in the late-2000s.

Batch brewers and espresso machines were the staples of the second wave coffee scene. But the third wave brought new attention to detail and a desire for more control over the brew. Coffee lovers also wanted a fresher cup than one that had sat on a hot plate for hours.

Pouring water over grinds by hand allows the barista to better control the contact between water and coffee than a second wave automated batch brewer. By better controlling the extraction, the barista can avoid a bitter or weak cup.

The pour over technique is also appreciated because it creates a clean cup, as opposed to the robust profile of an immersion brew like that produced by a French Press. 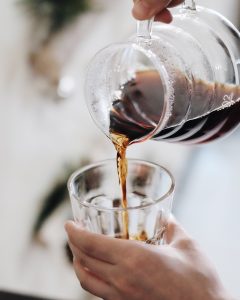 Dave Jameson is the Programme Manager at Grumpy Mule, a roastery in Holmfirth, UK, and 2014 and 2016 UK Coffee in Good Spirits Champion.

He tells me that filter coffee “needed rehabilitation in order to make a comeback after years of short brew ratios and over-extracted dark roasts”.

Dave says that the third wave embraced pour over because “the craft of hand brewing gave filter coffee its quality back, which has helped bring people back to good black coffee again”. 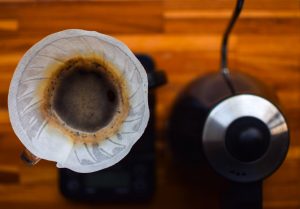 He tells me that “pour over is attractive to the eye and it delivers complex flavors and aromas into a clean cup. It’s a perceived simple method that can enthral even the most inexperienced coffee drinker.”

“I’d associate its recent popularity to the rise of a conscious consumer movement and the preference for artisan techniques in the day to day,” he says. 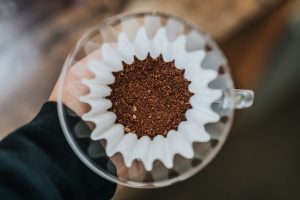 The detailed technique of a pour over is undoubtedly part of its appeal. Similar to the craft beer movement and the resurgence of sourdough baking, third wave brewing has embraced the pour over in part because it requires fine-tuning a set of skills. Self-declared coffee nerds enjoy this dedication to their passion.

To know how to get a great cup of coffee, a pour over barista should understand pulse pouring and agitation. That’s in addition to having a good understanding of the factors that affect extraction, such as grind size, bed depth, and water temperature. And are you familiar with Tetsu Kasuya’s four-six method?

The World Brewers Cup competition celebrates this level of involvement and states that it “highlights the craft of filter coffee brewing by hand”.

Find out more in Brew Guide: How Does Pulse Pouring Affect Extraction? 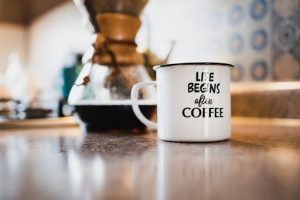 In 2007 Starbucks debuted a single-cup brewing device. The Clover was introduced to selected stores and the company describes it as a combination of “full–immersion brewing and vacuum extraction with the skill of our baristas to extract the full flavor potential of our Reserve coffees, one cup at a time.”

Jonathan Bonchak is the Sales Director at Slingshot Coffee Company. He tells me that this was instrumental in the wider consumer move towards single-cup coffee. “Once the machinery was taken over, coffee people had a taste of ‘by the cup’ marketing and digging in to better understand brewing,” he says.

The Pour Over Backlash

But manual methods are dependant on pouring technique. Human error can create a cup that is under-extracted. For example, a bad pour can create channelling. This is when a stream of water finds an easy route around the grinds and some of the coffee doesn’t get extracted.

With more control comes more potential for error and more difficulty in reproducing a consistent brew each time. For this reason, there is some backlash to the love of the pour over method. 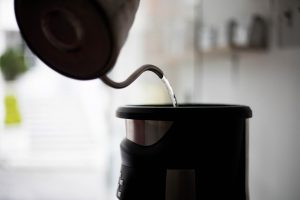 Pouring water into an SCA-certified Behmor Brazen Plus. Credit: Behmor

And some of the criticisms of batch brewing are no longer valid. When done well, batch brewing can actually be better than a poor pour over because it is a more consistent method of pouring water over grinds. SCA-certified batch brewers reduce the inconsistency of human error while also making sure the coffee is made to high standards.

Dave points out that “in true cyclical fashion, the early pour over evangelists are now reintroducing well-made, good batch brew with correct brew ratios and quality coffee because it is more consistent and cost-effective.” 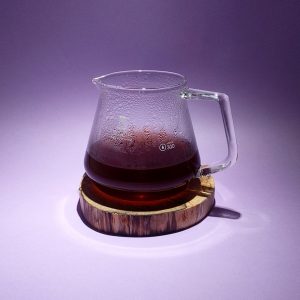 A jug of pour over coffee. Credit: Sebastian Franzén

So pour over coffee has been embraced in recent years for good reason – it can produce a clean cup, is relatively inexpensive, and allows the barista full control. The technique can be a great entry to learning more about coffee.

But pour over requires understanding the basics of extraction. If you don’t consider grind size and learn how to pour the water, it’s easy to make coffee that tastes bad. Even experienced baristas can’t produce identical results each time.

The ritual of a pour over is part of its appeal, but if you want a consistency, it may be worth looking into an SCA-certified batch brewer or ordering a cup of the batch brew at your local coffee shop.

Enjoyed this? You may also like Is Pre-Ground Coffee Ever Better Than Freshly Ground?