Few stages of coffee production are as exciting, or as tricky, as post-harvesting. The choice of processing method, the way the cherries are picked, the drying times and storage conditions – all of these can have a dramatic effect on the quality and flavour of a coffee lot. And, in turn, this all impacts on the price of the coffee.

At the same time, post-harvesting can be an expensive, resource-consuming phase, whether we’re talking about labour, water, infrastructure, or equipment.

Producers need to think carefully about their post-harvesting techniques, so they can efficiently and profitably improve their coffee quality and value. And for that reason, it’s particularly important that we stop believing in outdated post-harvesting myths.

I spoke to João Alberto Brando, Overseas Sales Director at Pinhalense, which designs and manufactures equipment for coffee farms, and also Emilio Lopez, a coffee producer and Founder of the Cuatro M dry mill in El Salvador, which this year placed second in the Cup of Excellence with a natural processed Geisha coffee. They shared with me the myths that they still see many producers believing in. 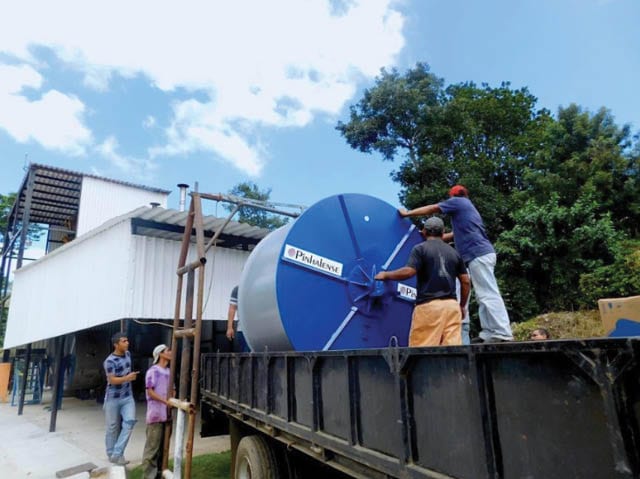 Post-Harvesting: Why Are There So Many Myths?

Post-harvesting is important, at times confusing, and nearly always dependent on many other factors – things that, combined, almost guarantee myths and misunderstandings.

While the goal is simple – remove the coffee beans from the coffee fruit, and then dry those beans to an acceptable level – there are many methods that can be applied: wet/washed, natural/dry, honey, pulped natural, experimental… Beans can be dried under the sun, under partial shade cover, mechanically, on patios, on raised beds, or in a combination of these methods.

Every step of post-harvesting is crucial, and has an impact – positive or negative – on the coffee’s flavour profile, quality, and longevity.

This is why it’s crucial that we stop repeating myths and start acting based on facts. 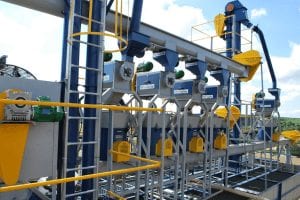 It’s almost impossible to separate post-harvesting from harvesting, since how you harvest the coffee dictates what you need to do afterwards.

With hand-picking, labourers remove the cherries from the trees by hand. They may do this quickly, stripping all the fruit from the branches in a method associated with commodity-grade coffee. Alternatively, they may do several harvests, selectively picking only the ripe cherries and leaving the others on the tree for longer. This is the harvesting method most celebrated by the third wave coffee industry.

Mechanical harvesting uses machinery to harvest cherries quicker and more efficiently. It’s not suited to rocky or steep land, and requires careful organisation of the coffee farm: trees should be planted in rows and may need to have wide gaps between them. Some machines will remove all the cherries from the trees; others are programmed to only remove the heavier, riper ones.

Additionally, some producers will use mechanical harvesters first on the tops of the trees, where cherries ripen earlier because of the reduced shade, before moving to the middle branches and finally to the bottom ones. 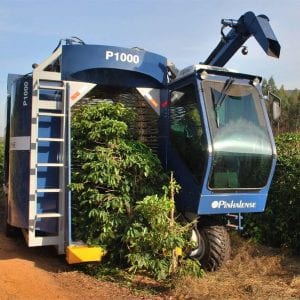 A Pinhalense P1000 in use on a Brazilian farm. Credit: Pinhalense

So, is mechanical harvesting always bad?

But it’s not just about saving money. On a large farm, trying to pick it all by hand would take so long that many cherries would ripen and then rot on the branch before pickers got to them.

It is also possible to target the ripe cherries with mechanical harvesting, either by adjusting the settings on the machinery or paying attention to which areas of the farm are ripening at certain times.

This is useful, because it means that the separate lots can be processed individually, rather than the under-ripe cherries being discarded. João Alberto explains that this allows producers to “access different markets”, allowing them to increase their incomes.

Emilio sees mechanical harvesting as part of the future of the coffee industry. “In Central America, there are already mechanical harvesters,” he tells me. “Not in specialty, yet. In other areas, due to the land, it will be a reality in five years.” 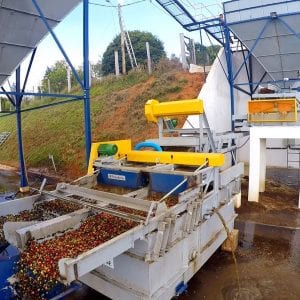 The Pinhalense LSC-05PX Coffee Washer and Separator removes over-ripe cherries and ones with defective beans, otherwise known as “floaters” because their low weight and air pockets will cause them to float in water. Credit: Pinhalense

After the coffee has been harvested and sorted, the next step is to remove the cherry flesh from the beans – assuming you’re doing washed/wet, honey, or pulped natural processing, of course. Natural processing would require the coffee to be dried still in the cherries.

Find out more! Read Origin Insight: Looking Inside The Coffee Cherry in 2 VIDEOS

In washed/wet processing, the cherry’s mucilage is notoriously hard to remove. Fermentation tanks are a common method; however, mechanical removers such as the Pinhalense DMPE can also be used.

João Alberto says that people use mechanical mucilage removers to ensure homogeneity, reduce water usage, and limit weight loss in the beans. According to Guatemala’s national coffee association Anacafé, the coffee can lose 1% of its weight after 14 hours in the fermentation tank, 2% after 20 hours, and 6% after 36 hours. In turn, this can affect the producer’s income.

While some fear that using mechanical mucilage removers can have an impact on quality, João Alberto assures me that in-house blind cuppings at Pinhalense have shown no differences in the final cup score.

“So many customers use both methods,” João Alberto tells me. “[They start with] fermentation tanks and they finish the process with a mechanical mucilage remover… We don’t aim to make mechanical methods replace every single innovation or processing method, but we aim to provide an alternative for the grower.” 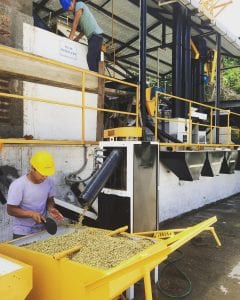 Myth #3: Washed Processing Is Bad For The Environment

While wet/washed coffees are celebrated for their clean profiles, which allow complex flavours and acidity to shine, one thing it’s not so celebrated for is its water consumption. The National Federation of Coffee Growers of Colombia (FNC) calculated that 40 kilos of water is required in order to get just one kilo of dried parchment coffee.

And then there’s how the polluted water is disposed of. In some cases, that water enters the local water systems, carrying with it all the compounds from the coffee cherries, and so disturbing the local ecosystem.

This has led to the simplified idea that wet/washed processing is bad for the environment, while natural/dry processing is the eco-friendliest option.

However, this doesn’t always have to be true. Yes, washed processing can have a negative impact on the environment – but there are ways to counter this.

So, is washed processing always bad for the environment?

Traditionally, water would be used to pulp the coffee, to ferment it in tanks, and also to transport the cherries along channels and, in doing so, sort out the defective ones. This is possible because the defective ones will often float in the water, since the coffee beans haven’t properly developed. The cherries are lighter and have pockets of air in them.

Yet technology has been developed to provide producers with alternatives, particularly over the last decade, João Alberto tells me.

“There are ways to reduce the water used in the conveyance of coffee,” he says. “… Our suggestion is that we don’t use water for conveyance, so it is better to use either an elevator or a screw conveyor.”

A mechanical coffee washer and separator, he adds, needs just one tank of water per day. And depending on the mechanical depulper, it will use either zero or very little water.

“The technology has been developed a lot in this sense for washed coffee processing. Using the right technology, water usage is much less, and I would not say it is a concern nowadays,” says João Alberto. In fact, he tells me that using a combination of Pinhalense’s machines could mean that only 250 ml of water is needed per kilo of cherries.

And Emilio, who started off just processing natural and honey coffees, now also processes washed lots. He tells me that this new technology allows him to use just 20% of the water he would use if processing in a more traditional way – and also, he adds, less electricity. 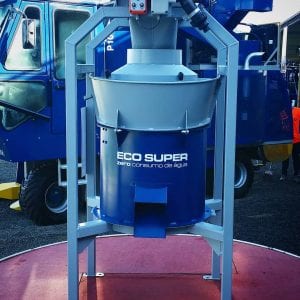 The Pinhalense ECO SUPER, a machine developed to pulp coffee cherries with only minimal use of water. Credit: Pinhalense

The drying phase has just as critical an impact on coffee quality as the harvesting and processing. It affects the coffee’s flavour, aroma, longevity, and more. In the worst of cases, inconsistent or overly slow drying can lead to mould and lost crops.

Potential drying methods include patios, raised beds, and mechanical dryers. The specialty coffee industry normally prefers raised beds. At the same time, in humid environments, they may not be suitable. It’s important that the coffee doesn’t dry too slowly.

On the other hand, some people argue that mechanical dryers can dry the coffee too quickly, using temperatures so high that they damage the bean quality. While a producer can choose to dry the coffee at a reasonable temperature, the argument goes that it’s impossible to know what temperature the producer used.

João Alberto acknowledges these risks. He tells me that “exposing the beans for longer than they should be in the dryer and to excessive temperatures” can cause problems. In fact, high temperatures can be a problem no matter the drying method.

However, he says, “There are ways to dry coffee mechanically without affecting its quality… The mechanical dryer must have a good temperature control, so that you can control the temperature of the mass of coffee and set it to not exceed certain parameters, to [stay at] just 40ºC [104ºF].”

He continues to tell me that continuous movement of the beans is important, since it ensures uniformity during drying. This is why producers periodically turn their beans when using patios or raised beds. With a rotary dryer, however, the coffee will constantly move inside the drum. He argues that, actually, this is even better.

On Cuatro M, for example, Emilio uses mechanical dryers, patios, and raised beds, “according to the customer’s needs”. He says that the rotary dryers allow him to control the temperature, airflow, and drying time, while also bringing him a faster return on investment.

In other words, just like with raised beds and patios, it’s not just about the technology – it’s also about how you use it. 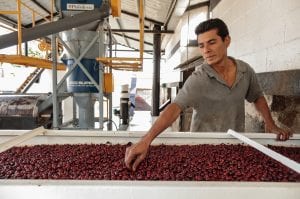 Choosing how to grow, harvest, process, and dry coffee is not an easy decision. There are many factors that need to be considered, from market demands to local climate and available resources. But what is important is that producers are able to choose the best method for their farm and their business goals – and that means having access to accurate information, rather than myths.

Enjoyed this? Check out A Producer’s Guide to Preparing Coffees for Export

Please note: This article has been sponsored by Pinhalense.