Around The GlobeBrazilCity & Country Guides

The city is the capital of Minas Gerais, a state that produces more coffee than any other country in the world. But it’s not just any old coffee: BH (as locals call it) is surrounded by many of Brazil’s award-winning coffee regions, such as South of Minas and Matas de Minas.

Its coffee farms and trees laden with ripe-red cherries aren’t the only reasons that Belo Horizonte is a capital of coffee. The city’s specialty coffee scene is blooming.

What’s more, on November 7th, 2018, it will host one of the most important coffee events in Brazil: International Coffee Week (ICW). Four official World Coffee Championships will take place there, including the 2018 World Brewers Cup Championship. 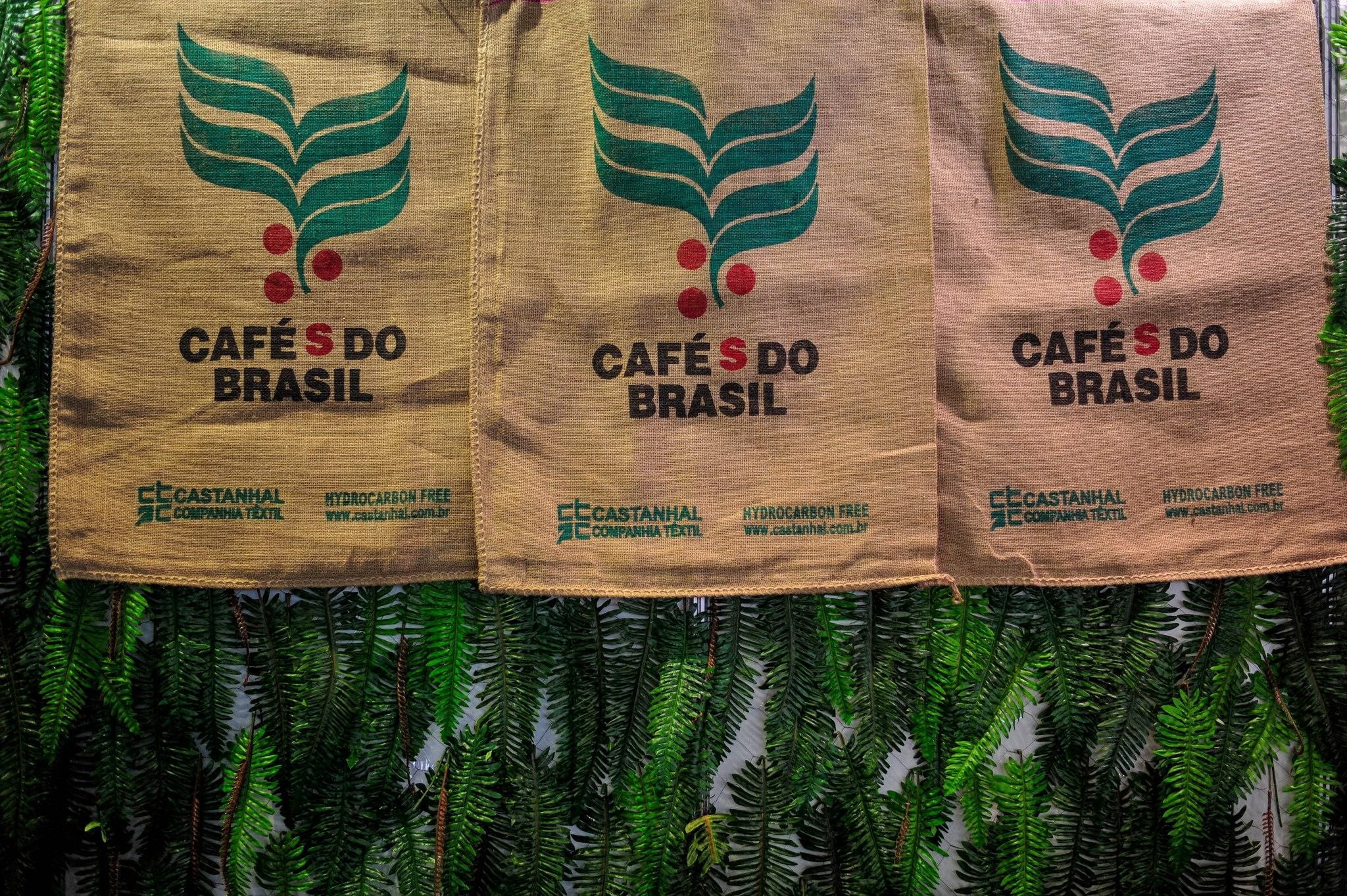 Inaugurated in 1897, the city is home to more than 2.5 million people. To put that in context, it’s bigger than Paris but slightly smaller than Rome. As a result, it’s considered one of the most important cities in the country.

Even though BH is a large city, nature doesn’t feel too far away: it’s filled with parks and also surrounded by mountains. In fact, it’s these mountains that gave birth to the city’s name: “belo horizonte” is Portuguese for “beautiful horizon.”

What’s more, just a few hours away by car lie some of Brazil’s most award-winning farms. 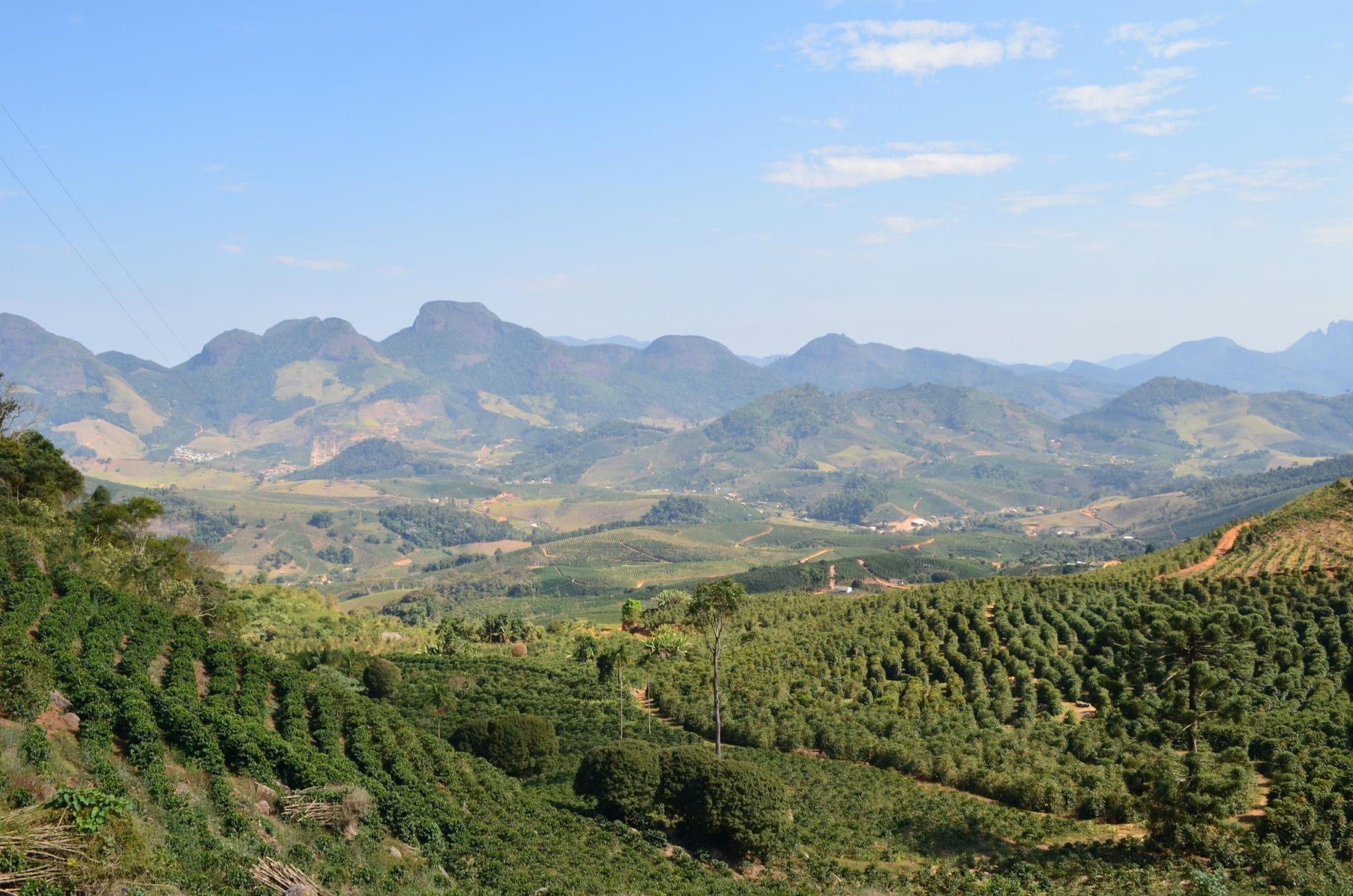 A Few Hours Away From The Coffee Farm

You have to see Minas Gerais to really understand how much coffee this state produces. Sure, I’ve told you that it’s more than what’s grown in any other country in the world. And I can explain that the state itself is bigger than the entire country of Spain (and not by a small margin, either).

But can you really picture, from these facts, the incredible diversity in climate, coffee varieties, processing methods, farm size, terroir, and elevation?

Want my advice? Pack your bags and book at least a week in this state. You’ll need that long to get a taste for all of the different coffees here.

And to get you started, here’s my short guide.

Five hours from BH by car, close to the border with São Paulo, you’ll find a region with a century-old tradition of producing coffee.

It’s known for its high-quality crops with exotic flavor profiles: last year, 11 of the 32 winners in the Brazilian Naturals Cup of Excellence came from here. Take the 89.56 Yellow Catuai from Sitio Esperança: it has “juicy” and “multidimensional” acidity, along with sweet, fruity notes such as figs, honey, blackcurrant, and marzipan sugarcane.

Five or six hours away from BH is Cerrado Mineiro, the first region in Brazil to receive Designation of Origin status for its coffee. This is a recognition of the coffee’s quality and distinctiveness as a result of its local terroir, much like that awarded to champagne and Florida orange juice. The status is a source of pride for producers and means the Cerrado Coffee Growers Federation works hard to ensure complete traceability of the specialty coffee grown here. 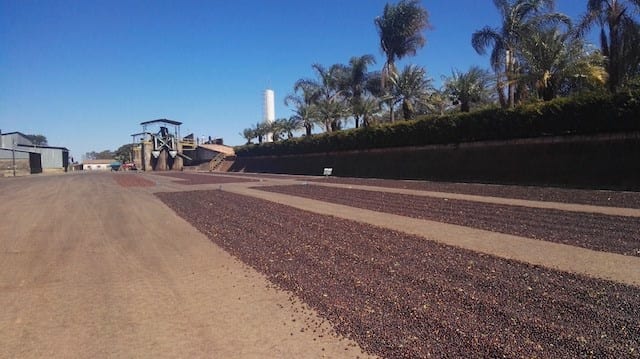 With solid infrastructure and regular investments in research, South of Minas is well-positioned to produce quality coffee. What’s more, it has altitudes of up to 1,400 m.a.s.l. and a cool climate with average temperatures of around 18–20°C/64–68°F.

According to the BSCA, coffee from here has high acidity, sweetness, a medium to velvety body, and notes including citrus, florals, almonds, chocolate, caramel, and fruits.

About four hours by car from BH, in the Atlantic Forest, you’ll find the wet and humid Matas de Minas. It’s this climate that led the region to pulped natural processing.

In fact, Matas de Minas is famous for its pulped naturals. In the 2017 Brazilian Pulped Naturals Cup of Excellence, the city of Araponga alone accounted for 14 out of the 27 winners. Take the 91.87-point second-place lot from Fazenda Das Amoras: it has an aroma and flavor of “pineapple, mandarin, apricot, orange zest, sugar cane, [and] floral [attributes]” as well as an “amaretto aftertaste,” creamy body, and “winy” acidity. 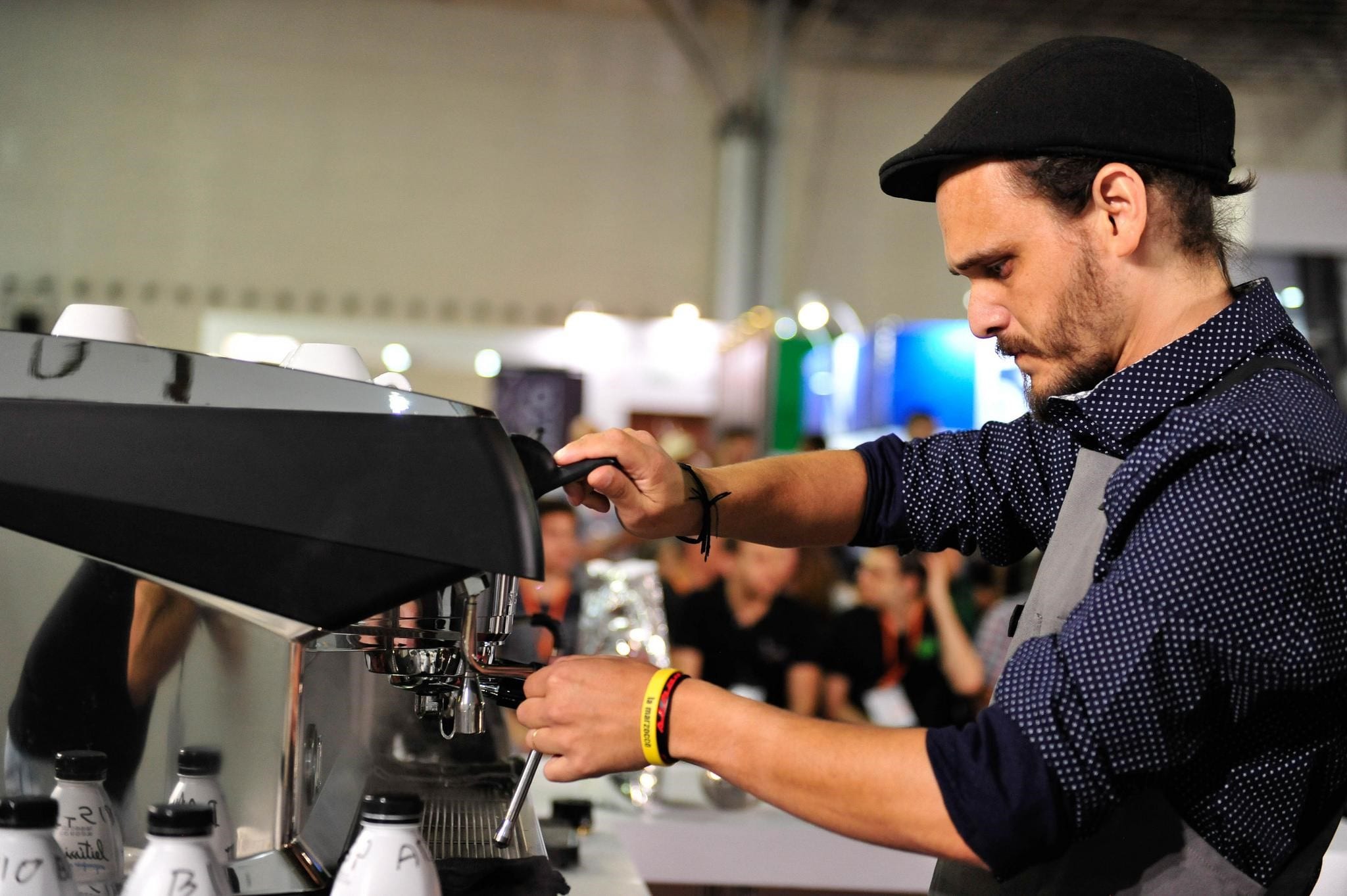 Head back to Belo Horizonte to try these coffees brewed in third wave cafés. Specialty coffee consumption is newer to Brazil than it is in, say, Portland or Melbourne. Yet it’s thriving. In the last decade, barista schools, roasteries, and dozens of coffee shops have opened.

Vanusia Nogueira is the director of the Brazil Specialty Coffee Association (BSCA). She tells me, “What I can tell you is that what I see, in general, is the specialty coffee market growing a lot, both in terms of consumption and now the addition of producers in specialty coffee.”

So, which coffee shops should you visit?

Mariana Proença is the Director of Café Editora, the brand behind the International Coffee Week and also the magazine Revista Espresso. They have just published a guide to 23 of the city’s specialty coffee shops. And in particular, she tells me that coffee-lovers in Belo Horizonte should go to:

1. Academia do Café – Founded in 2011, they were the first to establish an SCA-certified school and café-roastery in the city. They now have two locations and often serve up award-winning micro lots in addition to coffee education. Proença says, “Academia do Café is one that I like very much and recommend for those who are visiting the city.”

2. Will Coffee – This coffee shop started off in the owners’ restructured bedroom; today, it’s a stylish space with plenty of manual brew options and coffee roasted in-house. Despite its growth, however, it’s kept the friendly atmosphere that will leave you feeling right at home.

3. OOP Coffee – A relative newcomer, having opened only in 2016, OOP Coffee has soon made a name for itself. They roast in-house and sell their direct trade micro lots under the name of the producers. Add to that a relaxing atmosphere and delicious snacks, and you have the recipe for a great afternoon. As Proença says, “This is a very fine coffee shop… that I really like visiting.” 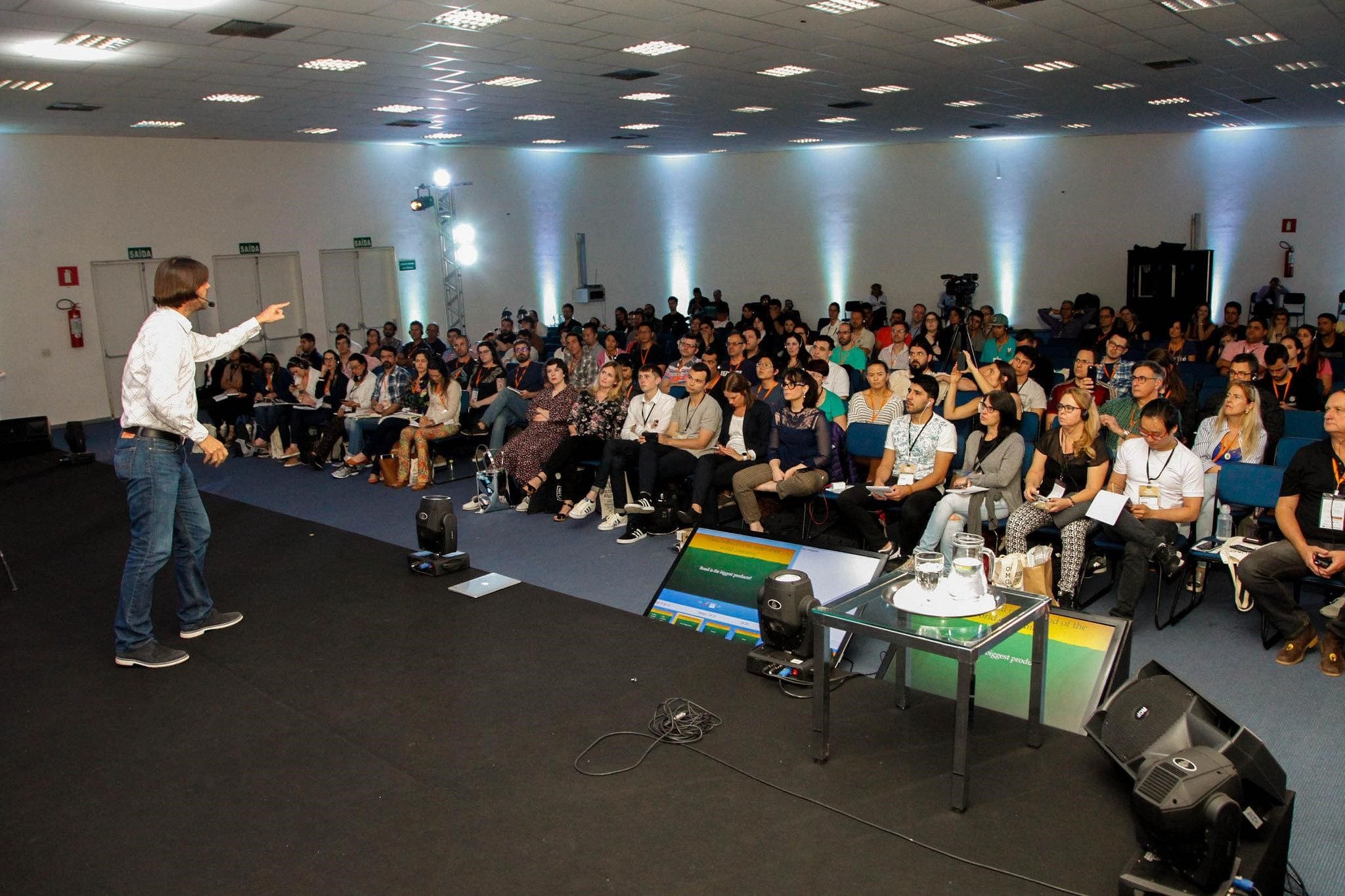 Nogueira says, “The ICW will showcase very good coffee, and it’s going to happen three weeks after we finish the Brazilian edition of Cup of Excellence. We are going to present all the Champions in the fair.”

Proença adds, “We focus on promoting content, which is a strong part of the event: lectures, workshops, knowledge-sharing. We tackle this a lot in the event, training, education. Then there is the exhibition of products, coffee-related product releases.”

And this year, there’s something new. Proença says, “This year, in a move that’s completely unprecedented, we are going to host four world coffee championships. These are competitions that have never before come to Brazil.”

As Nogueira underscores, competitors and their teams will be coming from over 50 different countries for these four events. 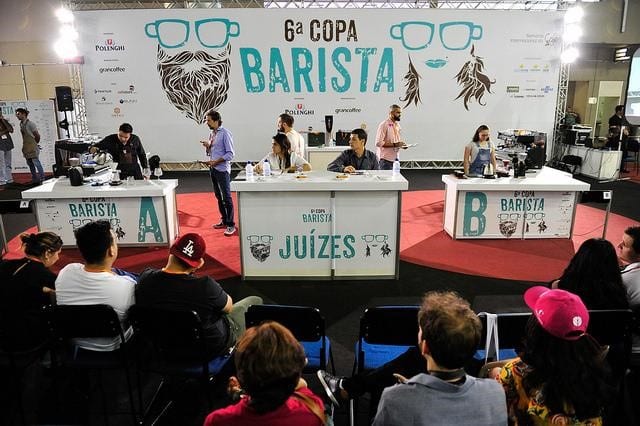 Yet International Coffee Week – which, this year, will run from November 7th to 9th – isn’t just about the championships. Here’s a snapshot of what you can expect from the event:

Priscilla Lins is the Agribusiness Manager at the Minas Gerais branch of SEBRAE, a non-profit the works to support the development of small businesses in Brazil. SEBRAE is part of the team behind the event.

She tells me, “We are organizing a huge meeting of the different links in the coffee chain. ICW will be an incredible opportunity-expanding moment, allowing people to do business in a different way, in a way which can only happen in a producing country like Brazil.

“And the big championships will also be a landmark and inspire entrepreneurs to join the coffee world. We want to invite everyone to participate in this journey that celebrates our new crop and creates the opportunity to cup the best Brazilian coffees direct from the producers.” 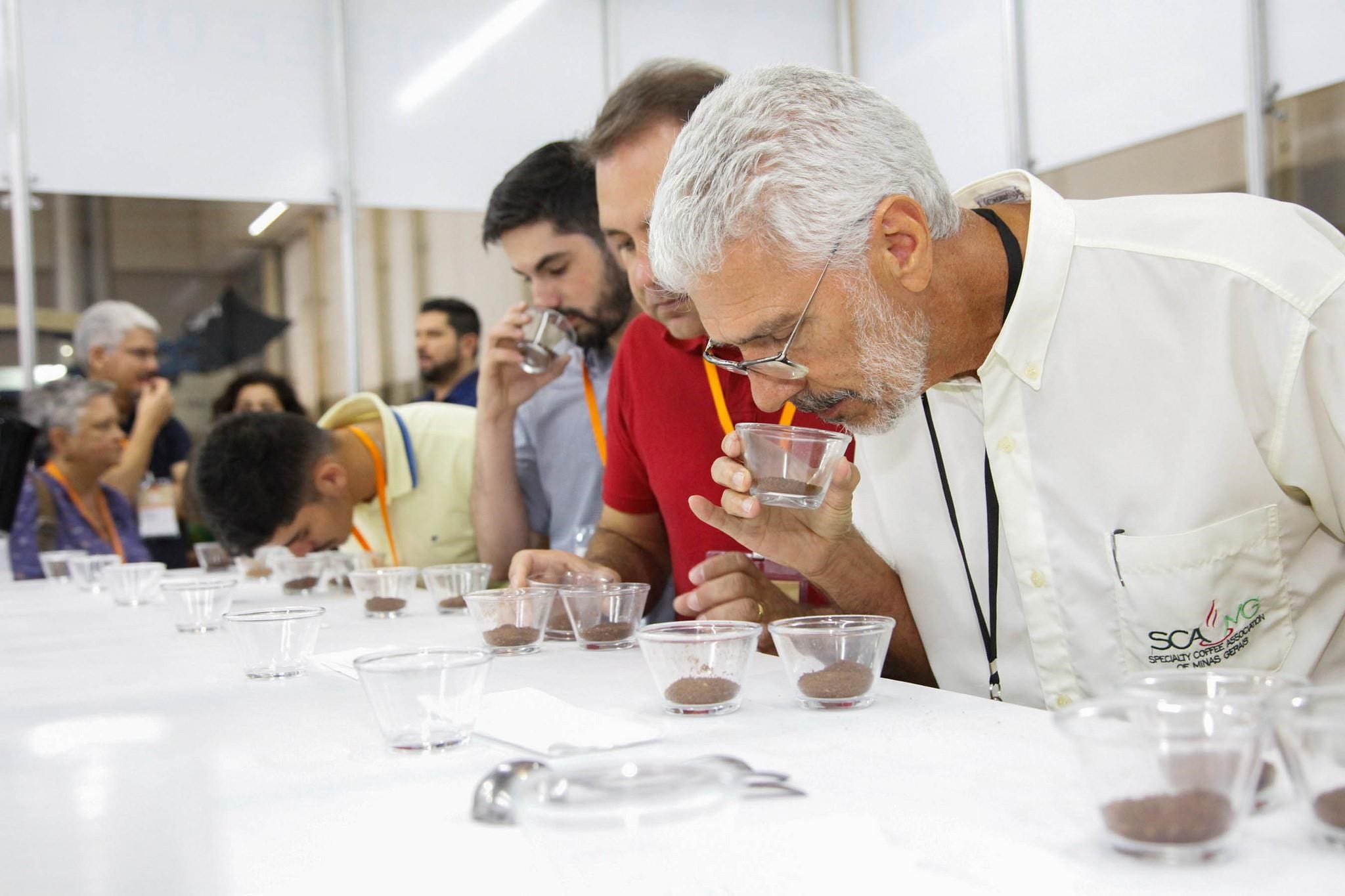 Belo Horizonte may be a city of coffee, but there’s more to this vibrant region than its fazendas and cafés.

Want your coffee to-go so you can enjoy the beautiful views the city is named for? Stroll in the Mirante do Parque Mangabeiras: you can see the whole city from this viewing-point. Alternatively, if it’s getting late, take in the incredible city nightscape from Praça do Papa.

Feel like eating out for dinner? BH’s restaurants reflect the city’s multicultural nature. Sure, you can try the Brazilian barbecue, or churrasco, at Costelaria Monjardim. However, if Japanese food is more your style, Proença recommends Sushi Naka or Restaurante Udon. Would a German pub be more to your liking? Head to Hofbräuhaus. The options are numerous.

Like any city, there’s also a range of nightlife (such as NaSala and Club Chalezinho), museums, and more. 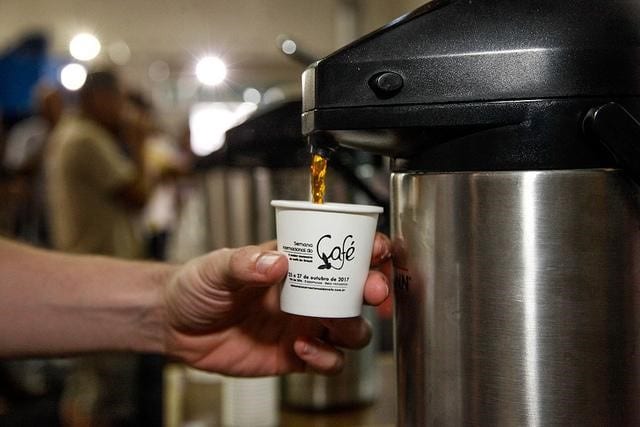 As the capital of Minas Gerais, Belo Horizonte has it all. You’ll find third wave coffee shops, roasteries, and barista schools. There’s quick and easy access to some of Brazil’s most award-winning farms and coffees, with their diverse processing methods and flavor profiles. And then there’s International Coffee Week, the fair that attracts attendees from all around the world.

Written by Ivan Petrich. All quotes were translated from Portuguese by the author. Featured photo credit: Nicholas Yamada.

Please note: This article has been sponsored by International Coffee Week.