Disease & Deforestation: The Cost of Coffee in Madagascar

In Madagascar, coffee is the fuel that powers everyone through their day – but it comes at a cost.

This island off the Mozambique coast is one of the poorest countries in the world, despite being rich in biodiversity. The majority of people here live in poverty and their lifestyle is interwoven with the country’s coffee culture. So, too, is their health.

Among the lush greenery and exotic animals, I discovered a disturbing backstory to Madagascar’s coffee industry. Read on to discover the true cost of this nation’s love of coffee. 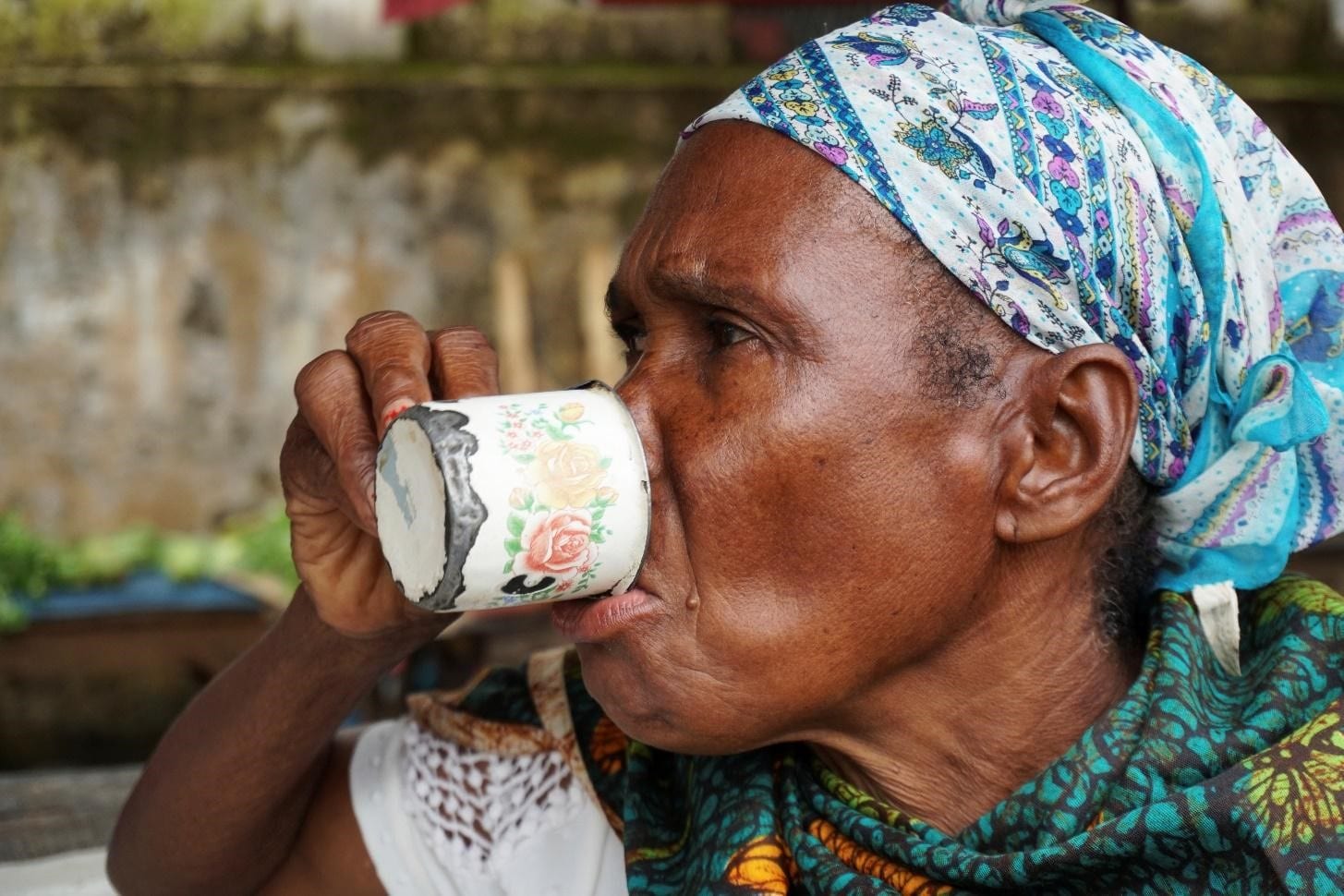 For young and old, rich and poor, coffee is a national pastime. Credit: Nicole Motteux

The Dangerous Life of a Coffee Vendor

Coffee is a major agricultural crop and source of income for thousands of people in Madagascar. From bean to bag, the coffee industry is an important employer each step of the way. This is because coffee is an ever-present part of life in Madagascar. About 80% of the total production of coffee is consumed within the country. Robusta accounts for the vast bulk of current output.

Every stage of coffee production and sale in Madagascar is arduous and poorly paid. But it is the small-scale coffee vendors who face the most difficulties and dangers.

During my travels, I met numerous coffee vendors who spend their days crouching over small fires to roast and prepare coffee. The constant exposure to smoke leads to the deep penetration of small particulate matter, carbon monoxide, and other harmful carcinogens into their lungs.

In their homes and workplaces down narrow alleys, and in improvised street cafés, I learned about traditional Malagasy coffee. 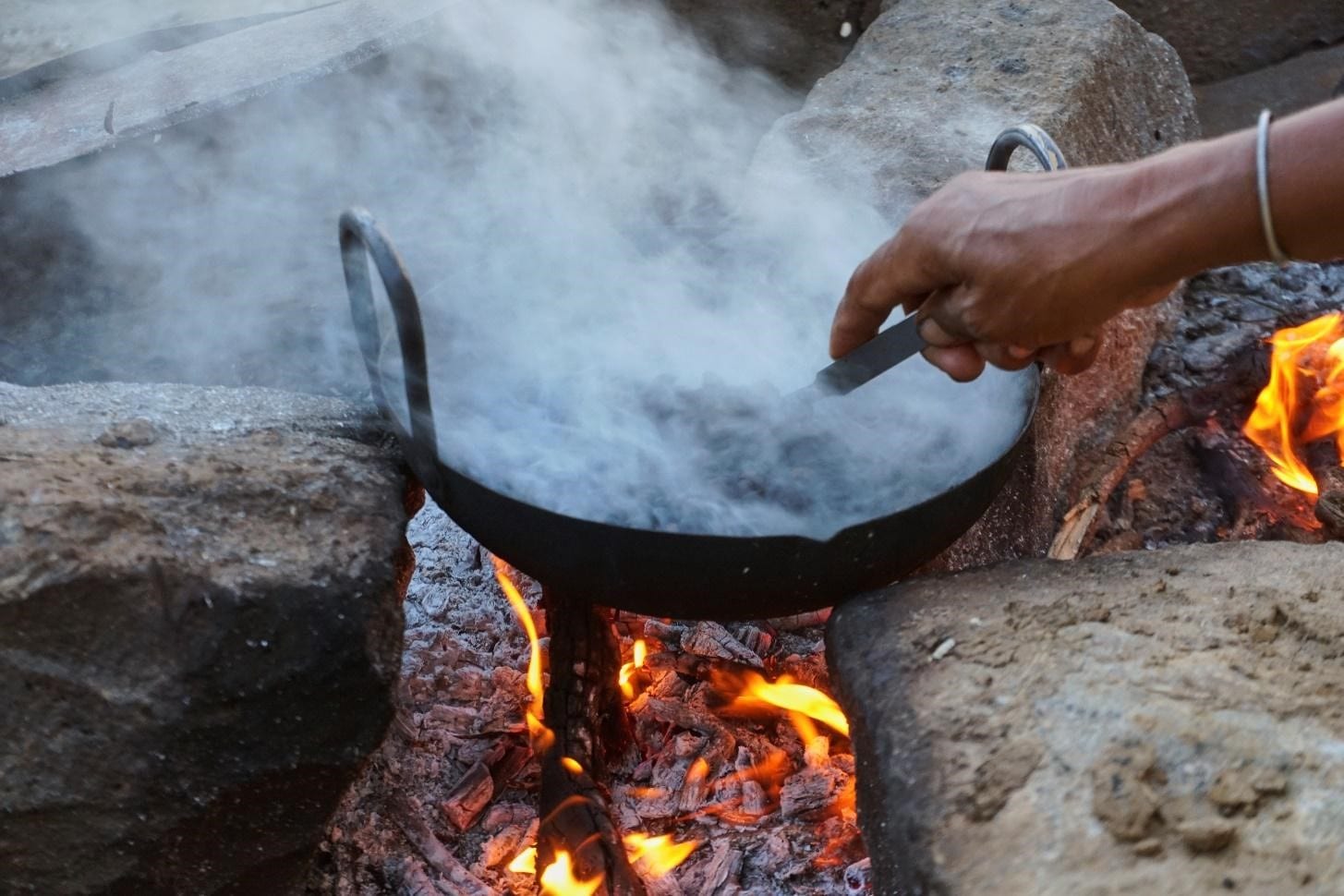 Coffee roasters like Mrs Nirina Moratsara spend most of their day beside a wood fire or charcoal stove. “From sunrise to sunset, I roast coffee, heat coffee, and I cook,” she says.

Her eyes are red and teary as she roasts a pot of green beans over an open wood fire. As one of thousands of street coffee vendors in a competitive marketplace, she knows that getting the perfect roast is vital to making enough money to survive.

“The fire’s heat affects the flavour,” Nirina explains. She prevents the outside of the bean roasting more quickly than the inside by carefully stirring and lifting the pan from the coals. She blinks and waves aside the thick smoke.

Beside Nirina is her six-year-old daughter, Nora, who rubs her eyes constantly. Only two of Nirina’s six children are in school. The others help with the coffee business.

Learn more in Zimbabwean Coffee: Rising from the Ashes 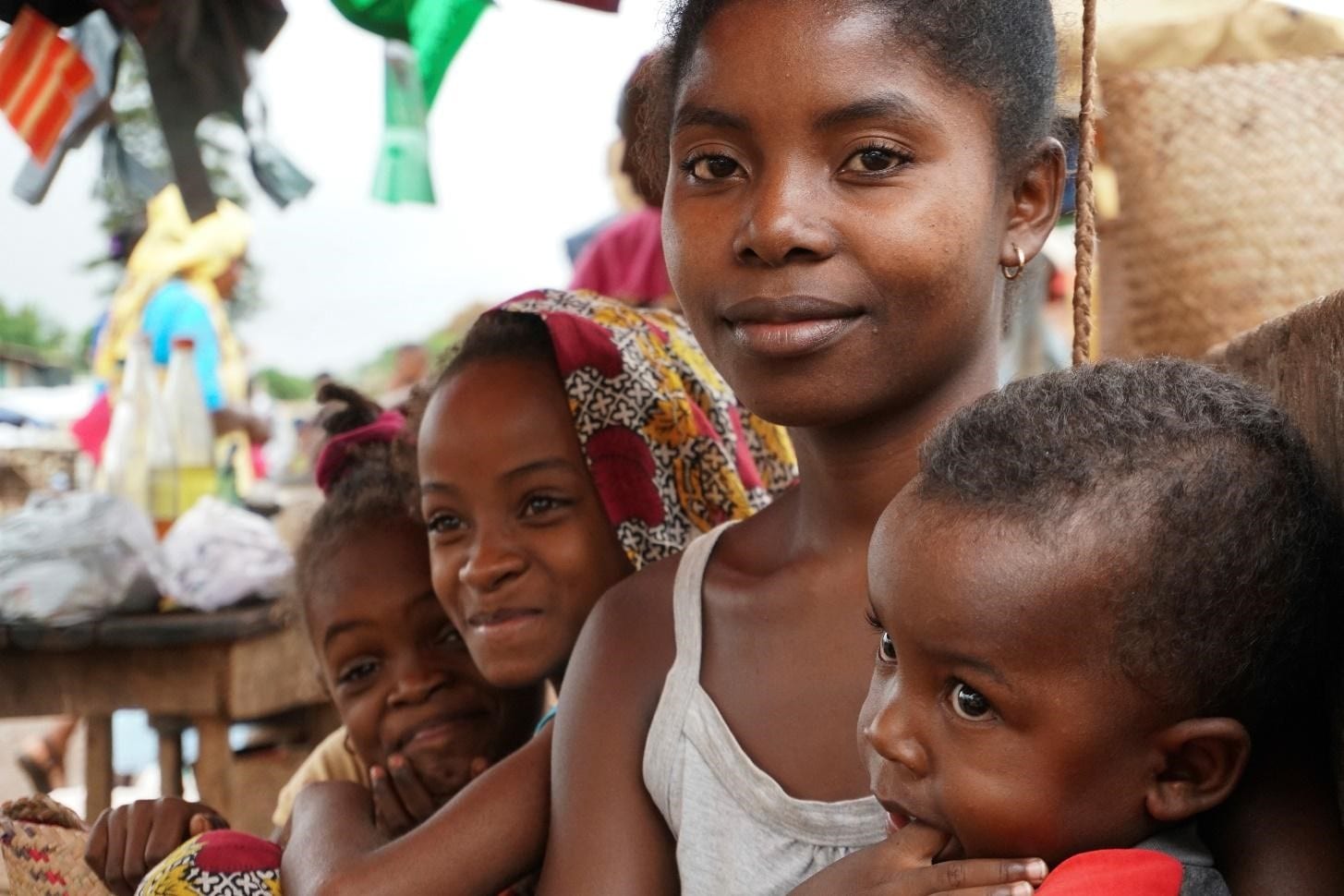 Many young Malagasy girls are withdrawn from school to work in family businesses. Credit: Nicole Motteux

One of The Poorest Countries in The World

Madagascar has long struggled with poor governance, most recently resulting from a violent uprising in 2009. Since then, successive failed governments have contributed to economic decline and destruction of natural resources.

The United Nations’ Human Development Index rated Madagascar an extremely low 161 out of 189 countries in 2017. This puts the nation among the poorest countries in the world. Almost 80% of the population lives on less than US $1.90 per day, including hundreds of thousands of street coffee vendors.

Half of Madagascar’s children under five suffer from stunted growth from poor nutrition. Like Nirina’s children, many are unschooled. 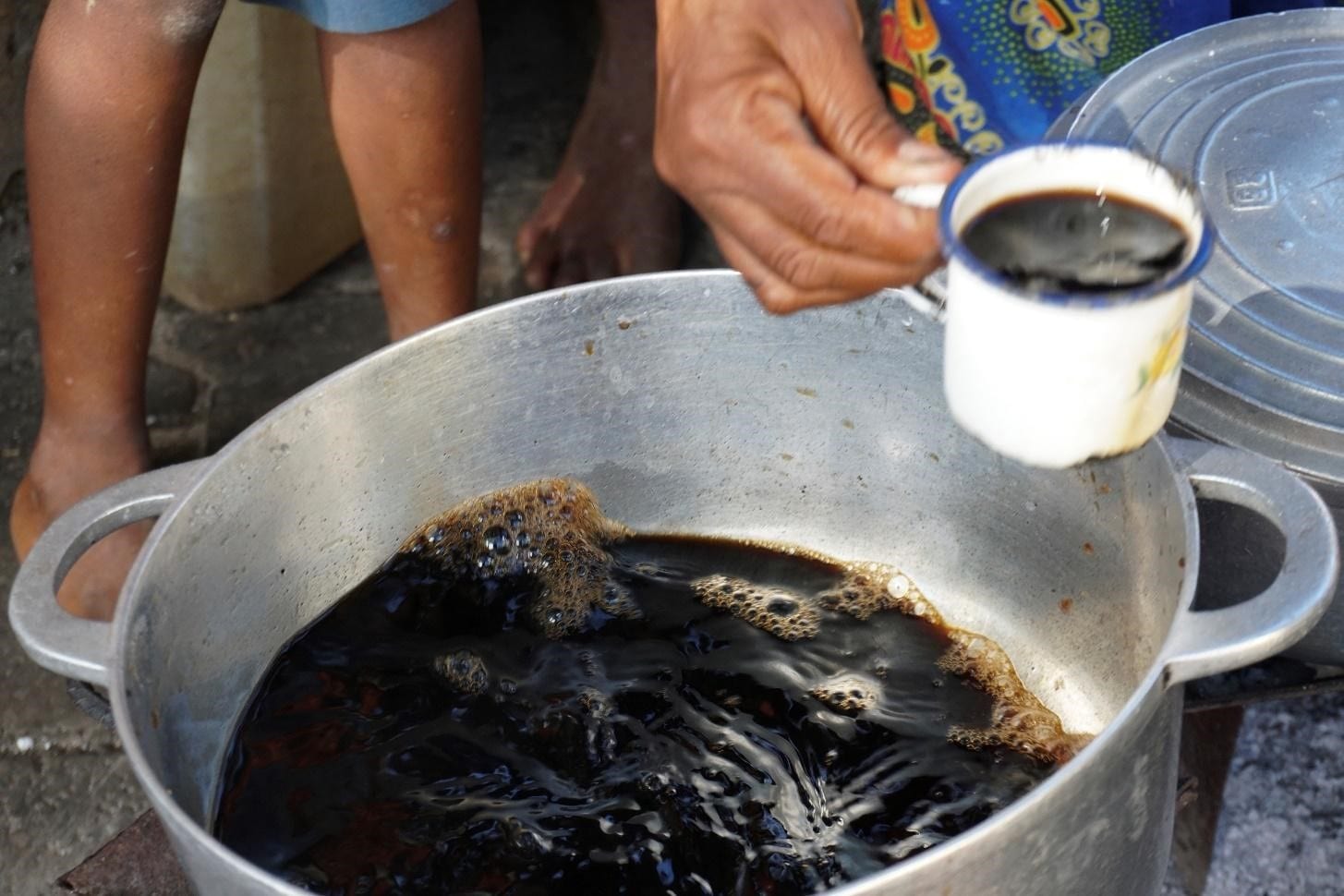 It is this poverty that forces people to live off the land. According to the World Bank, the majority of Madagascar’s 24.8 million people gather wood from forests for their cooking and heating fuel. Most of the rest use charcoal or buy wood.

Only 2% of the population has access to clean fuel and stoves and ovens for cooking. Only 16% of households have access to electricity. This dependence on wood and charcoal seriously impacts quality of life and degrades the environment. 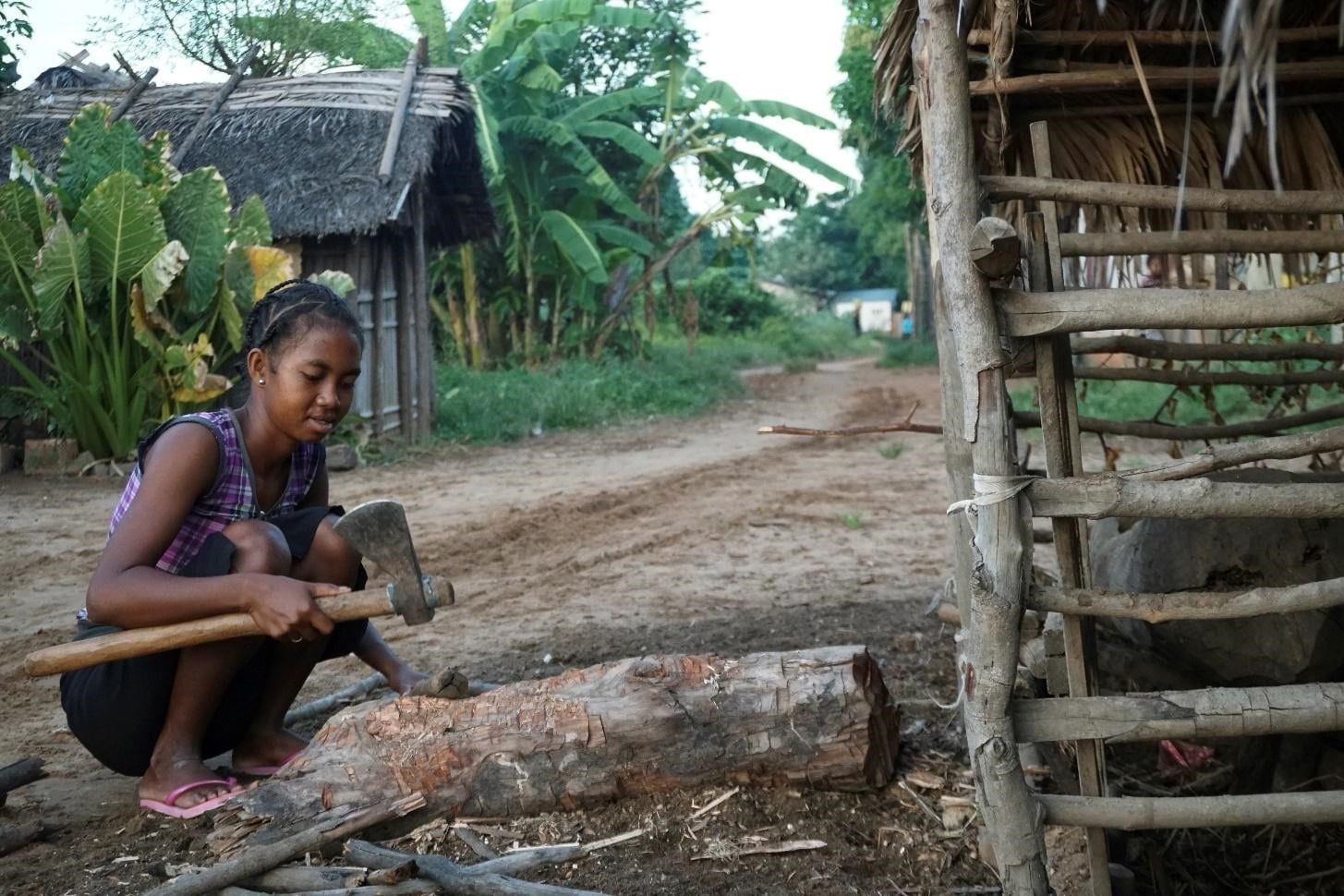 The impact of 99% of households using charcoal and wood is huge. More than 60% of rural households in Madagascar cook indoors. This means that the majority of kitchens have unhealthy concentrations of air pollution.

Small particulate matter in the smoke penetrates deep into the body, triggering chronic diseases such as asthma, heart attacks, bronchitis, and other respiratory problems. Household air pollution is considered the third-biggest cause of ill health in Madagascar, behind malnutrition and poor sanitation. 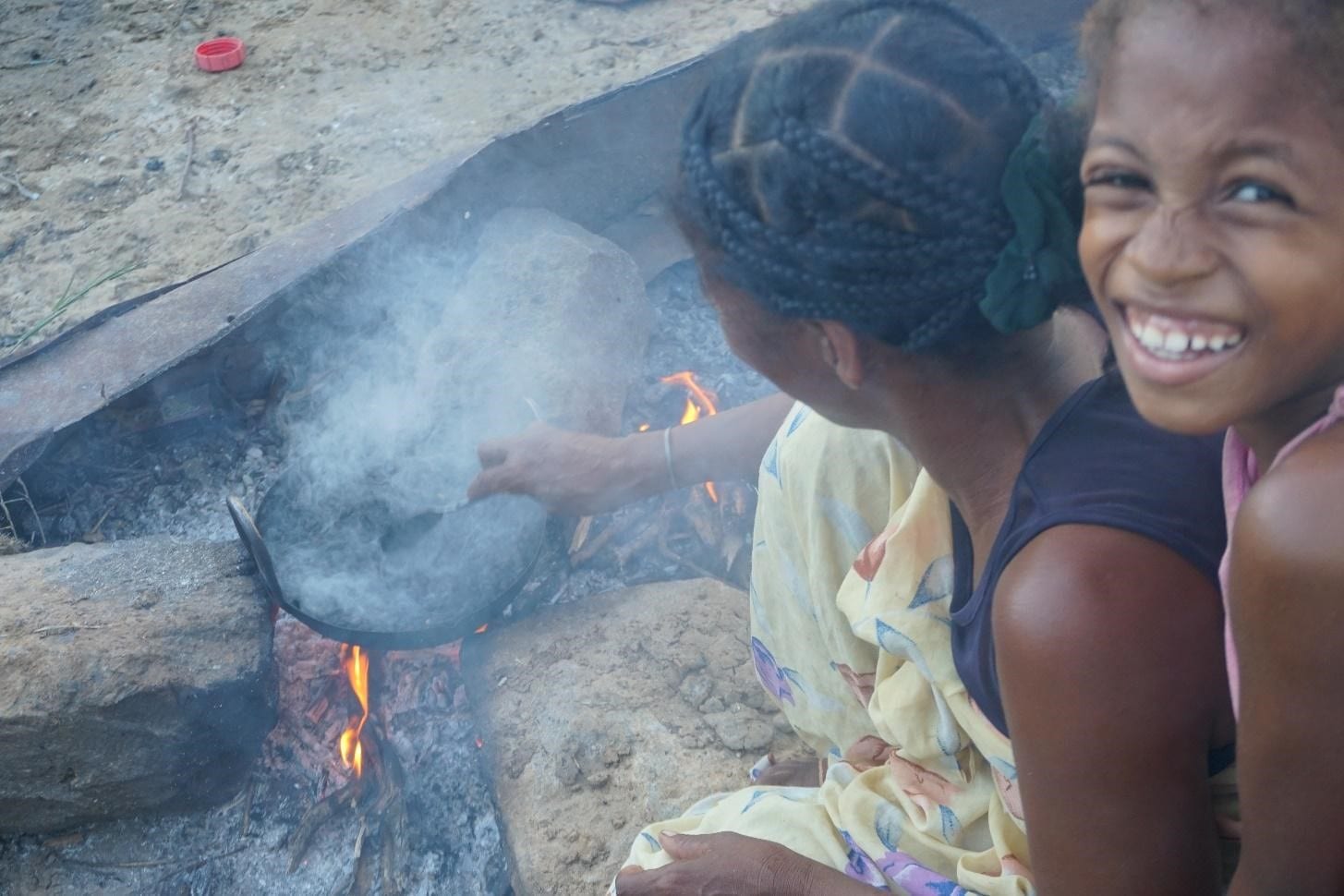 Coffee roasters like Nirina spend most of their day beside a wood fire or charcoal stove. Credit: Nicole Motteux

Each time Nirina makes coffee, she tends to a fire for an hour to boil the water. On Sundays and public holidays, she does this three times, making up to 8 litres of coffee.

She is fortunate to be able to roast her green coffee beans on a fire outside of her home. Other vendors use poorly ventilated kitchens thick with smoke. Some hunt for spots behind buildings or in narrow corridors – anywhere out of the wind.

Coffee vending provides a small income but it comes at a real cost. Nirina tells me of her headaches and chest pain. She wishes she could make enough money to send all her children to school. 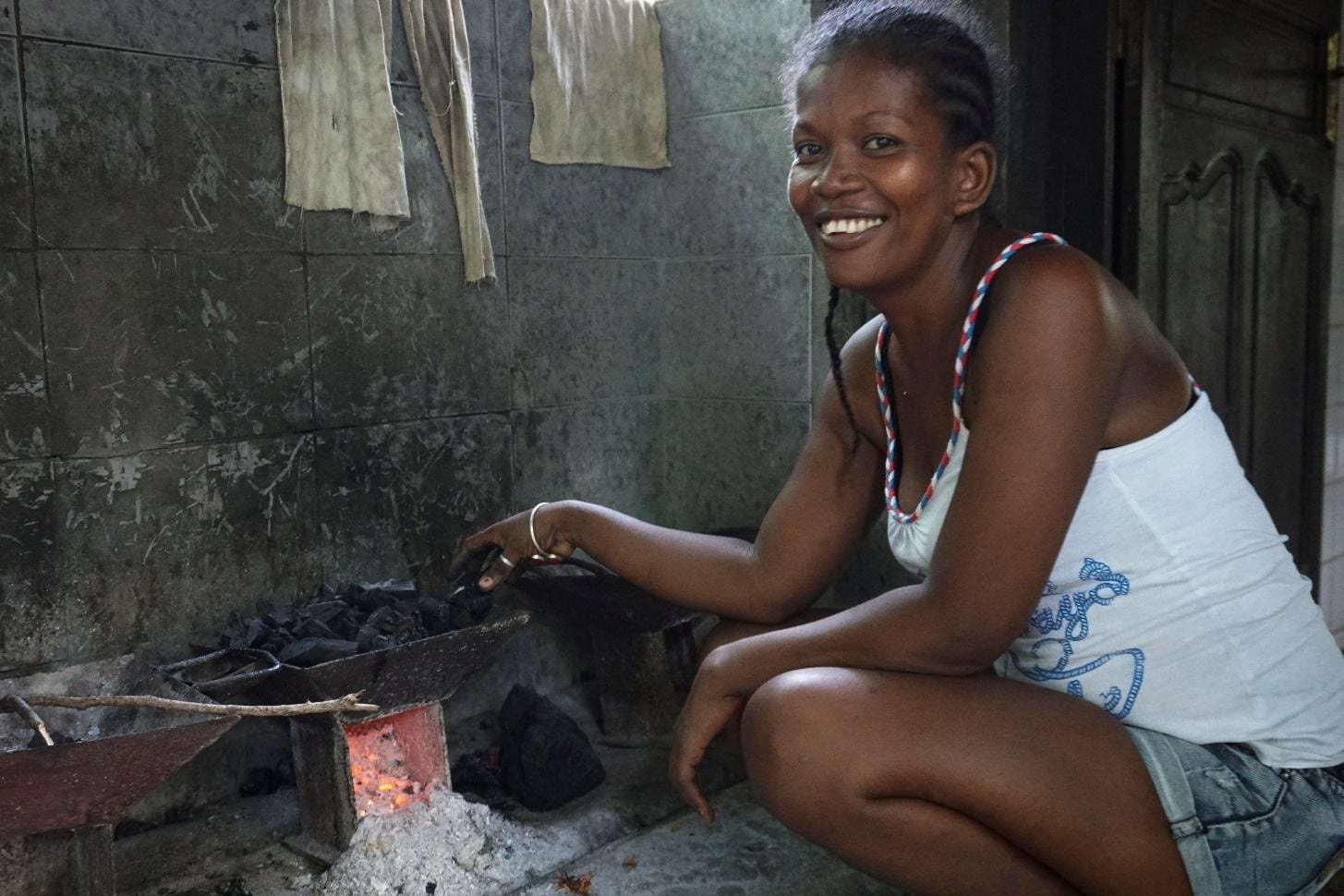 Every afternoon, Nirina and her children collect firewood. They are lucky to have a reliable supply nearby. Others have to walk very long distances to access free firewood and the task is often dangerous. Harassment is common, and rape is not unheard of.

Women tend to be disproportionately affected by health concerns here. Cooking is usually the responsibility of women or children, and vendors are more likely to be women. As a result, they are exposed to more causes of chronic and life-threatening diseases than men.

Before dawn the next day, Nirina packs up her supplies and travels to her usual roadside corner in the business district. She uses a charcoal stove to brew her coffee. “I like charcoal more than wood. The smoke is less. I can carry it, don’t have to chop charcoal, and it’s dry,” she tells me.

“My charcoal cooker broke. I now use my neighbour’s one. It is very heavy and fragile. Every day I have to collect the cooker and give it back. I cannot afford to buy a new one. It is 16,000 Ariary [about US $5]. I make 20,000 Ariary gross income each day and from that I have to buy green bean coffee and ingredients for sale tomorrow, as well as food for my family.”

Charcoal stoves don’t generally emit as many particles as wood-fuelled stoves, but they still produce a lot of carbon monoxide. 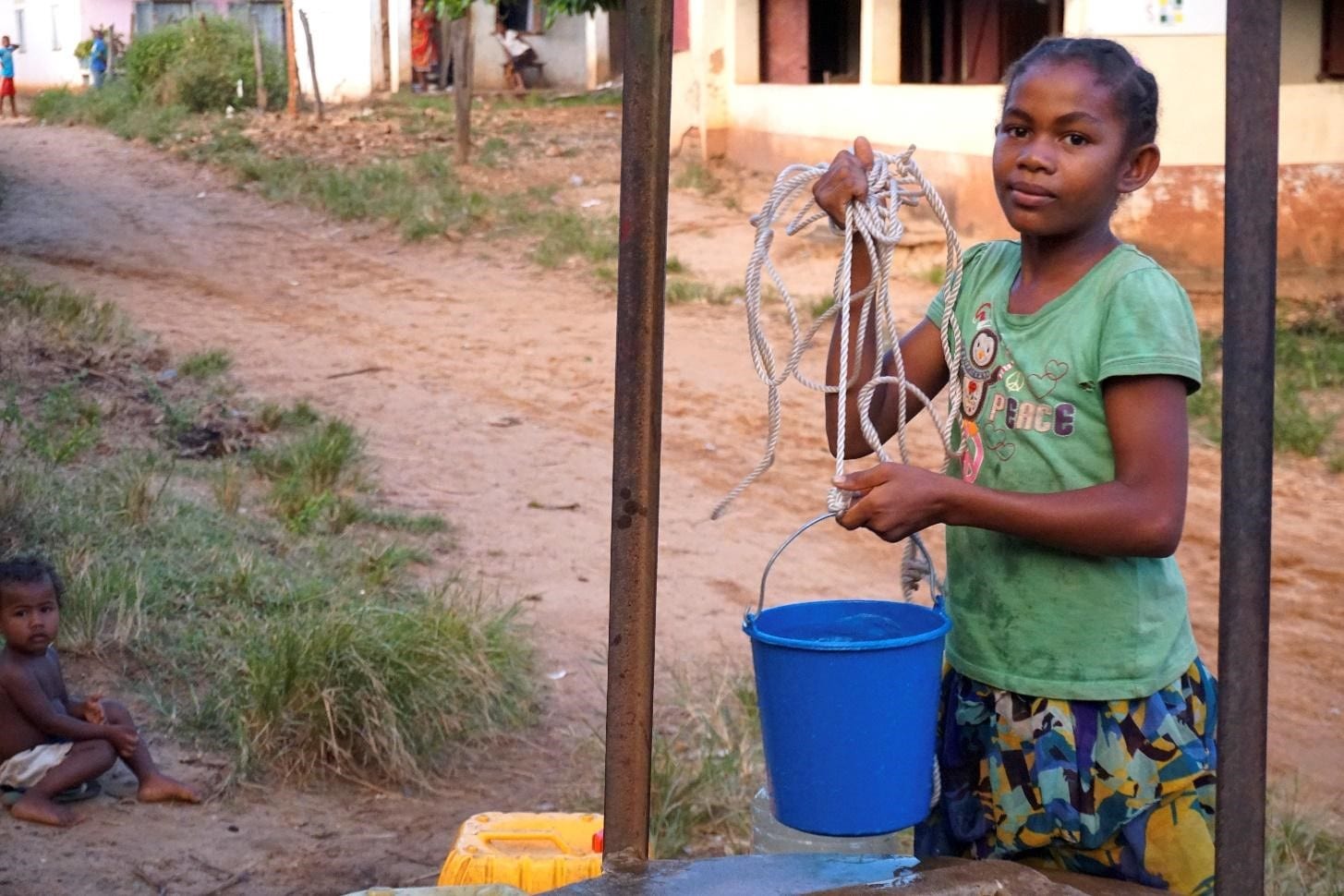 Malagasies start their day with a cup of coffee and a fried rice cake. It’s a daily tradition that’s affordable even for the most disadvantaged people. For some, it may be the only meal of the day.

Basic comforts are a challenge in Madagascar, thanks to limited electricity and running water. It is the fourth worst country in Africa for access to safe drinking water. For many, buying a coffee from a street vendor is the safest option. 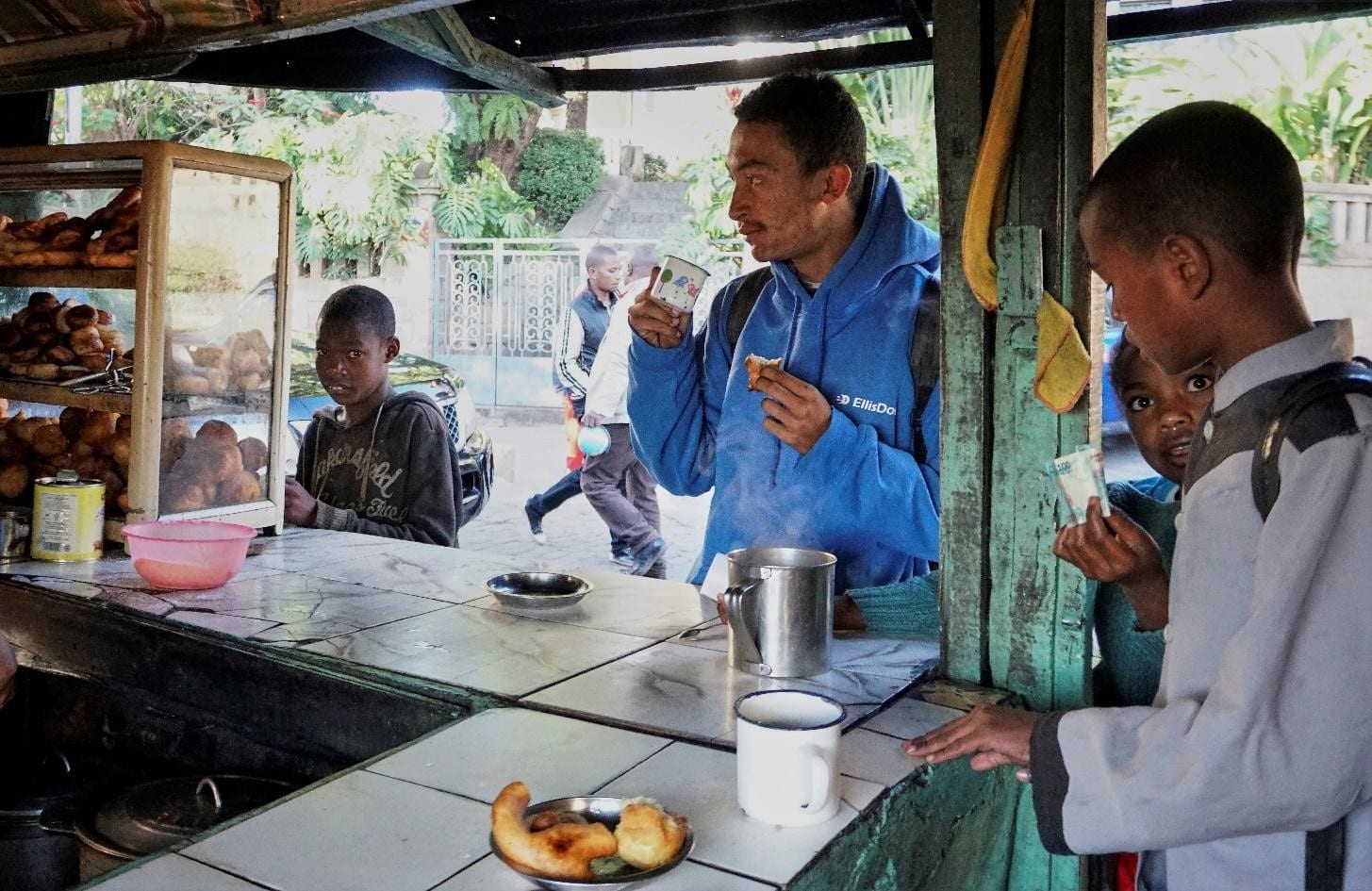 Coffee and street food warm and fill the body and saves on fuel for cooking breakfast at home. Credit: Nicole Motteux

Poverty has caused other environmental hazards in Madagascar. Traffic jams of old and poorly maintained vehicles create further air pollution. Standing at their roadside stalls, thousands of coffee vendors are exposed to toxic fumes each day. 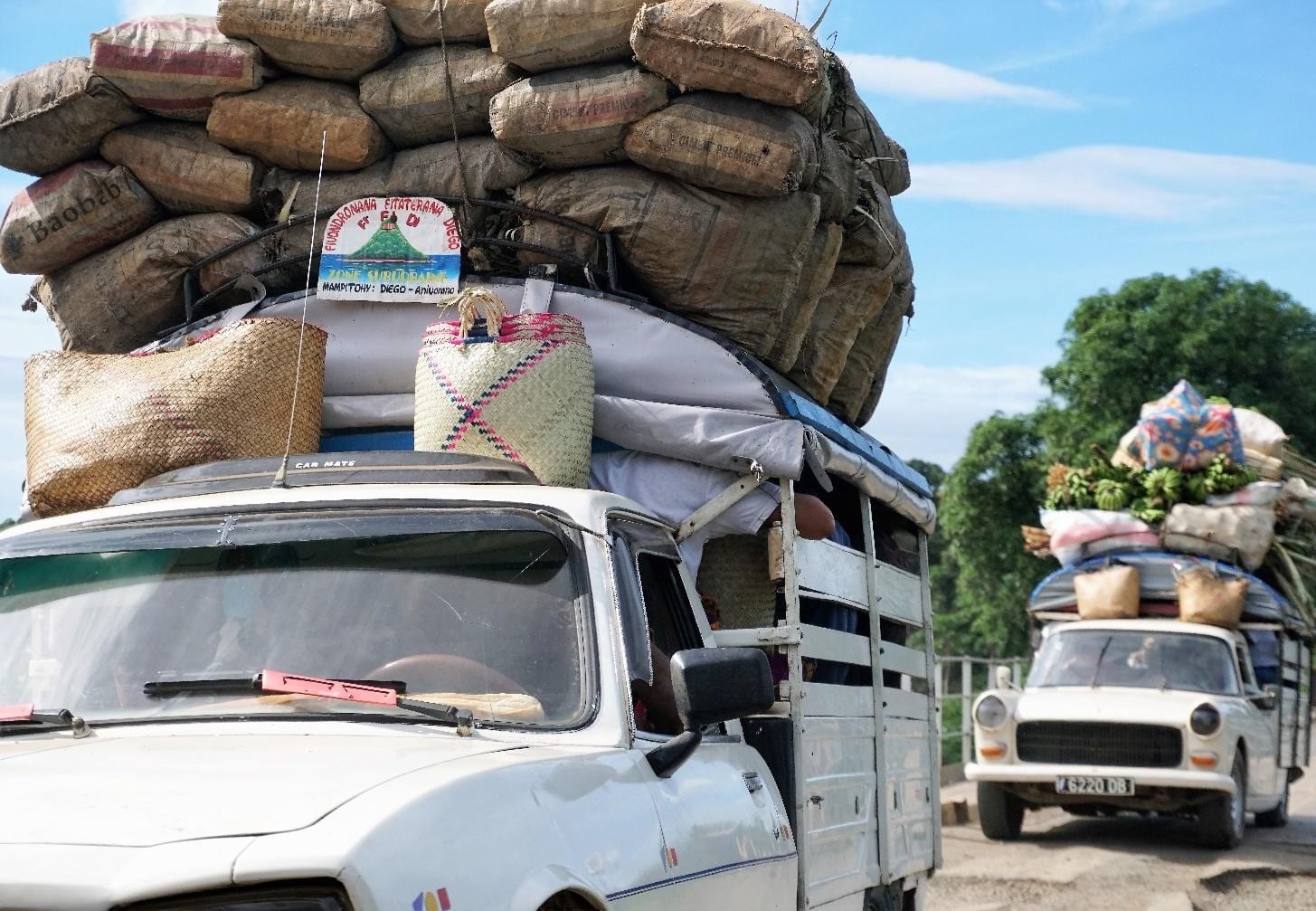 Huge amounts of the country’s original forest have been lost in recent years. Global Forest Watch reports that from 2001 to 2017, Madagascar lost 3.27 Mha of tree cover, equivalent to a 19% decrease since 2000.

Deforestation is due, in part, to replacing forests with coffee fields. The country has lost about 80% of its original forests and the primary forest now covers only about 12% of the country. The consequent erosion and soil degradation have further impacted the ecosystem. 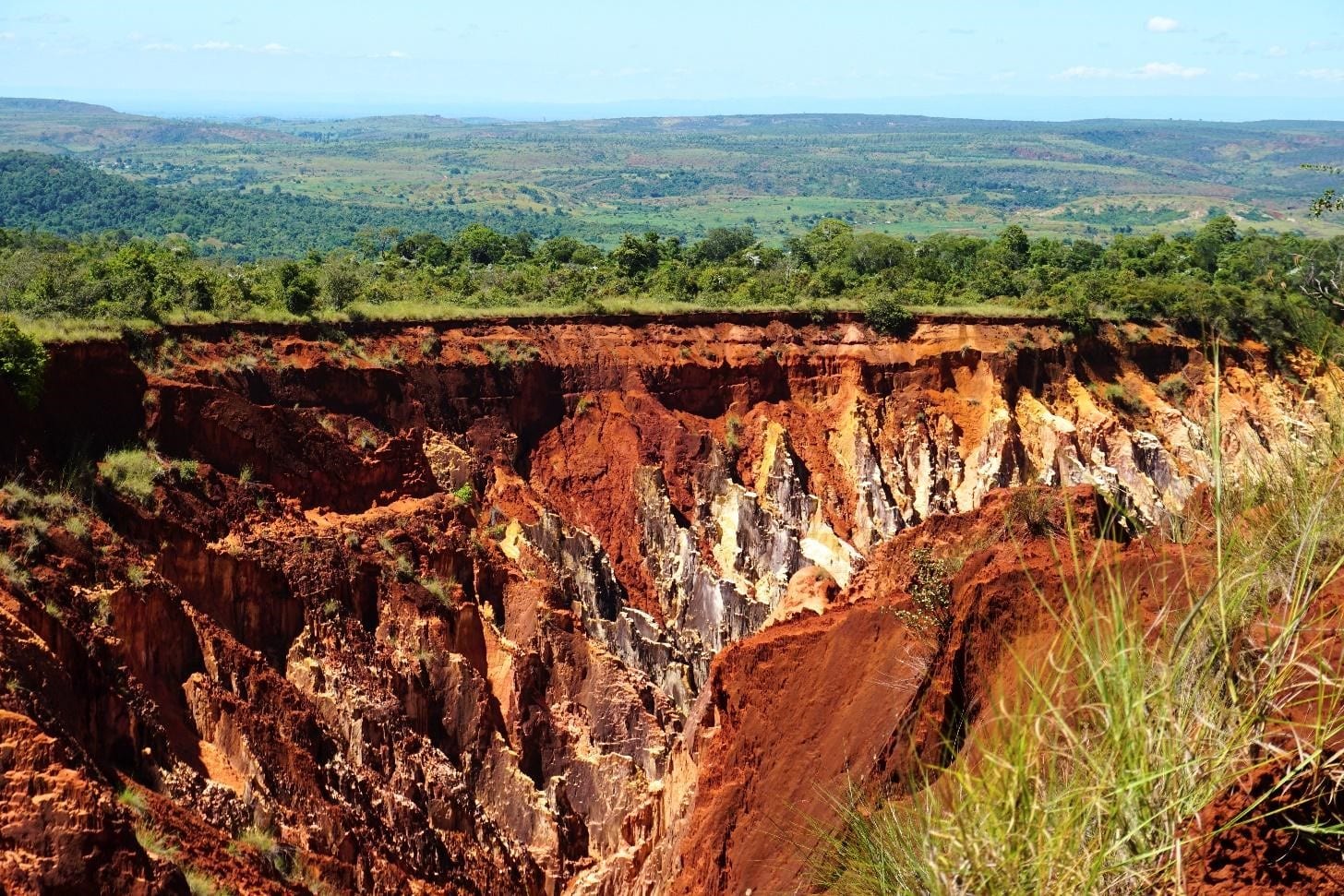 In the central highlands, the evidence of soil erosion and run-off is devastating. When grassland is burned for agriculture and trees are cut for fuel, the sandy earth collapses. The result is dramatic canyons. Sediment is then washed downhill during the rainy season. The red sand carried by water blocks drinking water and irrigation canals. 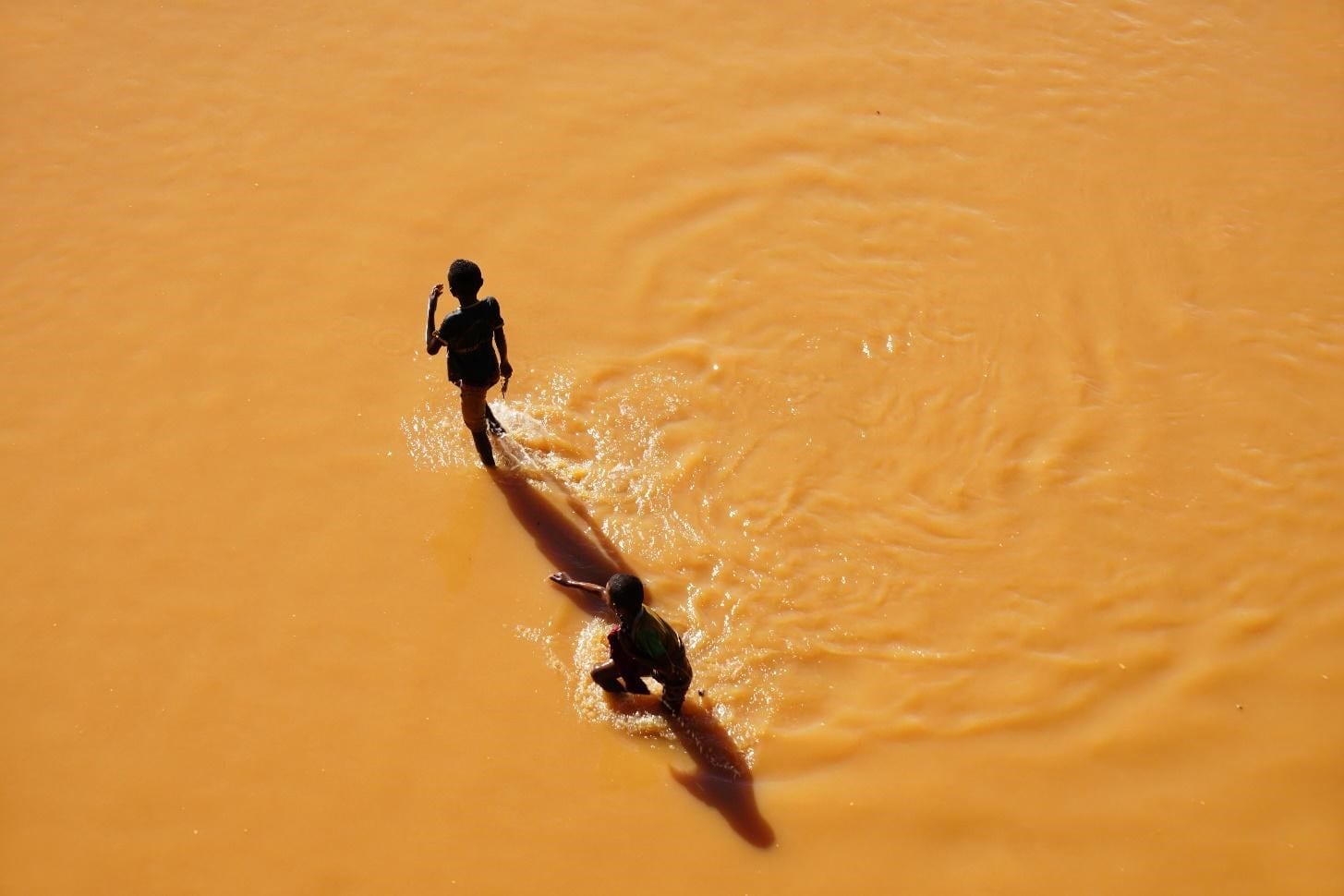 The once densely forested mountains are now bare, thanks to firewood, slash-and-burn agriculture, and overgrazing by zebu cattle. The humped cattle are central to rural life, but short-sighted farming techniques have destroyed the landscape. 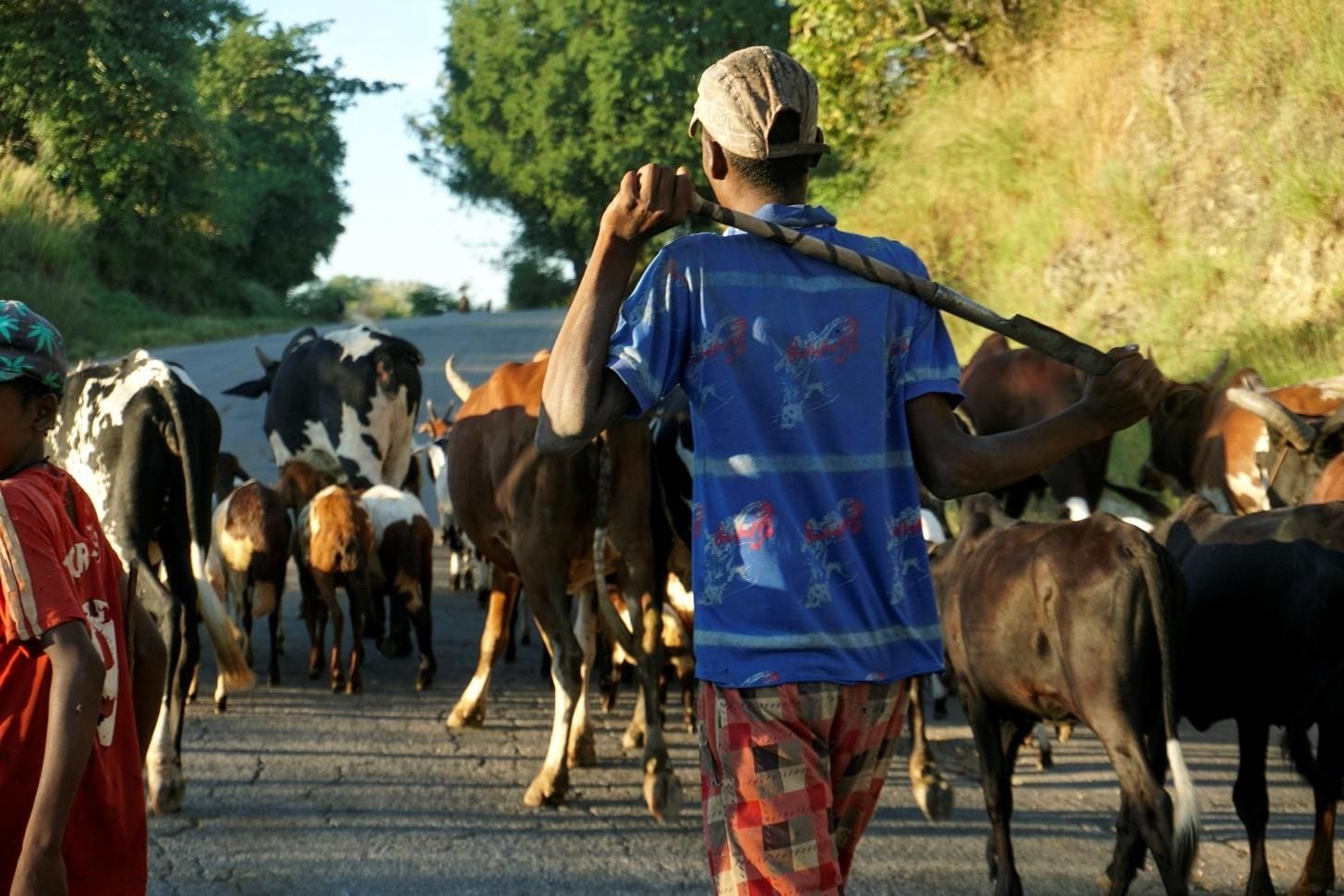 Overgrazing by zebu cattle is just one cause of serious land degradation in Madagascar. Credit: Nicole Motteux

Madagascar needs clean and sustainable sources of energy to reduce the country’s long-term health and environmental concerns. Energy-efficient cookstoves are one small innovation that can make a big difference. 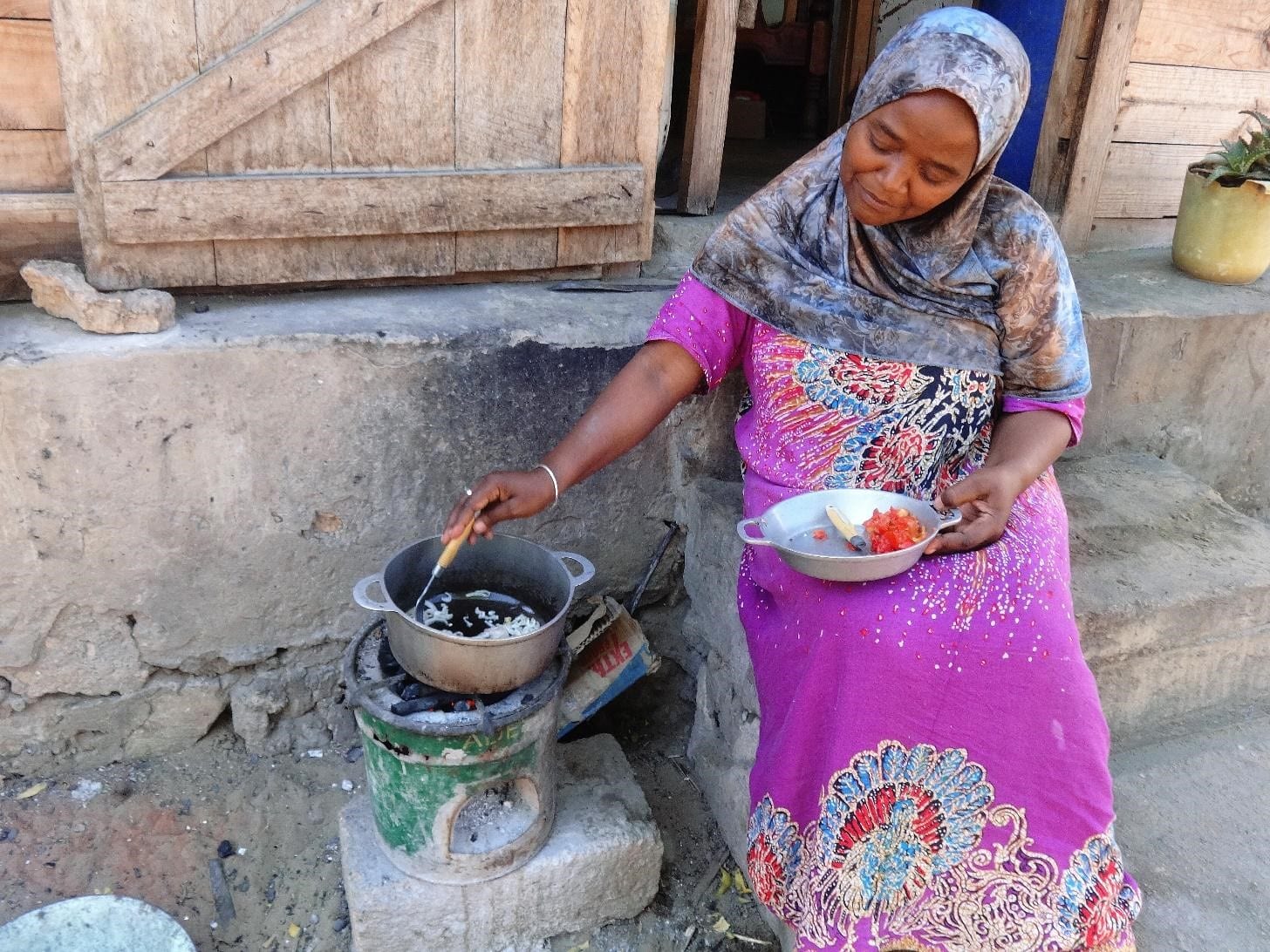 ADES is a Swiss energy development organisation that has been working in Madagascar for 18 years. It builds market-based partnerships with local companies to produce energy-efficient cooking stoves.

The organisation works closely with government and businesses to educate the Malagasy people about energy-efficient cooking methods, ventilation, and sustainable livelihoods. It has an ambitious goal of 60% less energy use in Madagascar by 2050. ADES has sold over 170,000 stoves and has a sustainable, local production line in place. 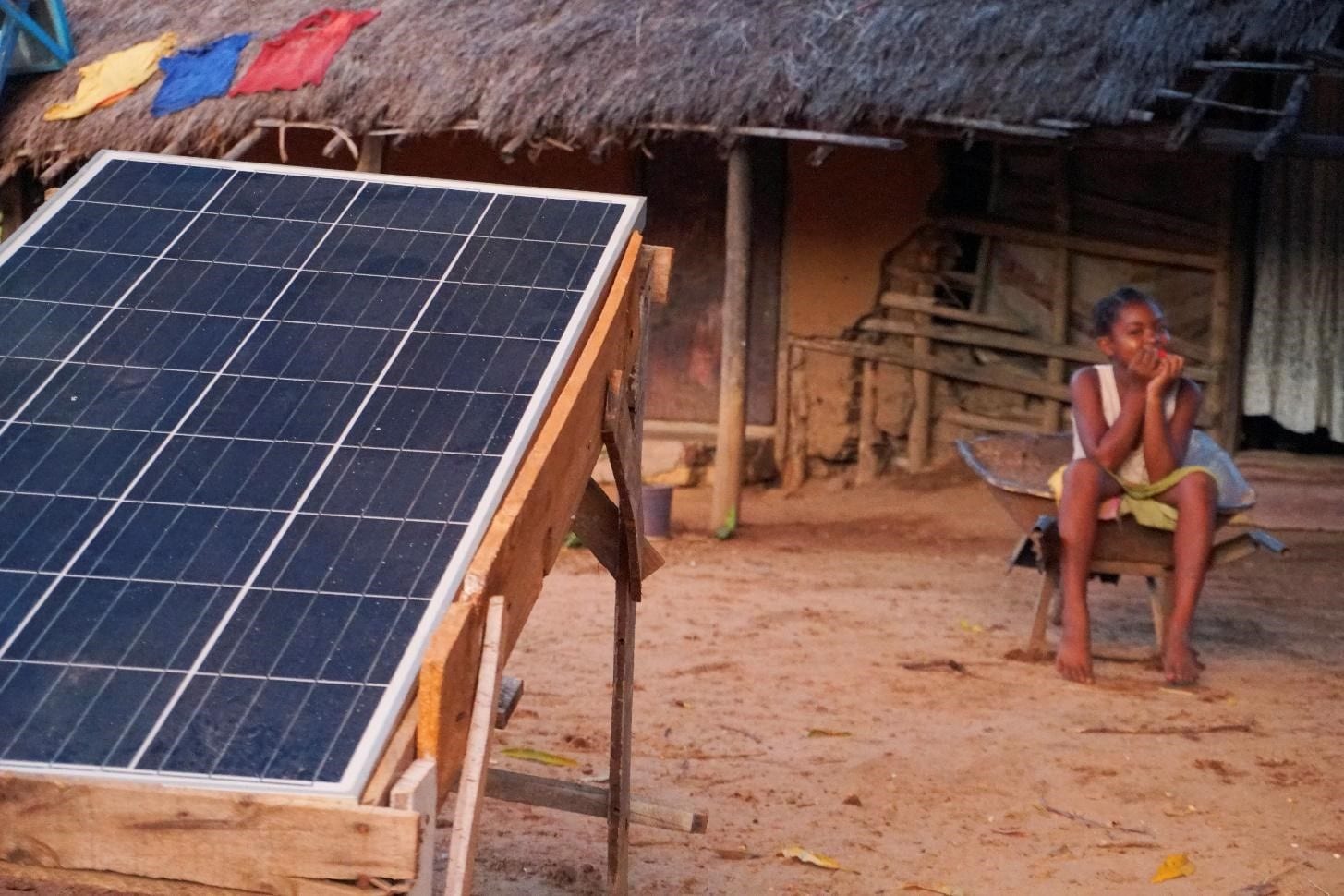 The future health of Madagascar’s small-scale coffee industry and its wider population is uncertain. Indoor and outdoor pollution inhibit economic growth and exacerbate poverty. Yet, I left Madagascar feeling some hope for a cleaner coffee future.

I left Nirina with a clean cooking stove of her own, knowing that this small gesture would have a huge benefit to her financial and physical health.

Enjoyed this? Check out Could Zimbabwean Coffee Once Again Be On Specialty Menus?

Written by Nicole Motteux with input by Lilani Goonesena and image editing by Angie Lázaro. With thanks to interpreter and guide Mr Harry Rakotosalam. Feature image: Nicole Motteux