For many years, Papua New Guinea’s coffee was overshadowed by that of its neighbour, Indonesia. Yet its sweet, fruity crops and ideal coffee-growing conditions are drawing roasters’ and consumers’ interest. And with a 65% increase in coffee production between 2015 and 2016, it’s time we paid a little more attention to this small Oceanian country.

I had the chance to speak with several coffee professionals, all of whom have led workshops with Papua New Guinean cooperatives on quality improvement in collaboration with Fairtrade Australia New Zealand.  Keep reading to discover their thoughts on Papua New Guinea’s coffee industry, the challenges facing it, and its future role in the specialty market. 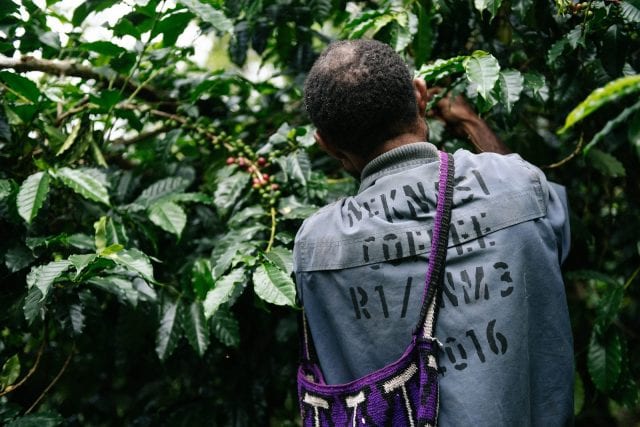 According to the Coffee Industry Corporation Ltd. (CIC), which regulates Papua New Guinea’s coffee industry, there are 16 producing provinces across Papua New Guinea. However, over 90% of production is in the Eastern Highlands, Western Highlands, Jiwaka, Morobe, and Simbu provinces. The vast majority of the coffee is exported, primarily to Germany, the US, and Australia.

Even today, after Papua New Guinea has seen a 65% increase in production, the country’s crop is small. According to the ICO, it produced just under 1.2 million 60-kilo bags in 2016 (in contrast, Indonesia produced just under 11.5 million). What’s more, before 2016, the industry had been in decline. However, many Papua New Guineans are affected by the coffee industry: the CIC estimates that it provides an income to 400,000 rural households.

José Pablo Juarez, a Costa Rican Q grader who delivered Fairtrade training in Papua New Guinea, underscores the importance of understanding the country’s tribal nature. There are many cultures and over 800 different languages. 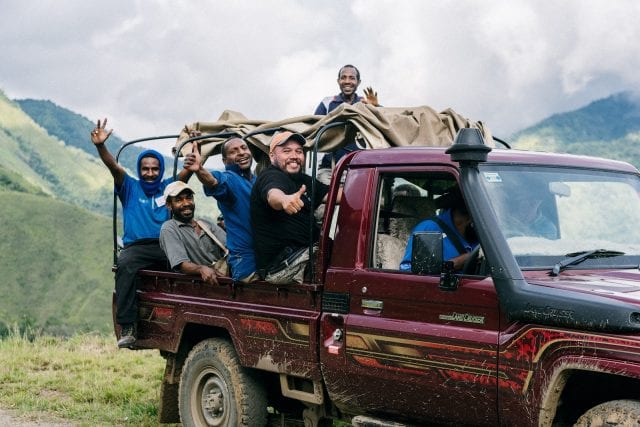 José Pablo tells me that “coffee gardens”, not farms, are the norm. These are small plantations run by small households, and the CIC calculates that they produce around 85% of the country’s coffee. Some of them, José Pablo explains, are up to 30 years old and can be in need of renovation.

According to Will Valverde, Senior Producer Support Officer at Fairtrade, most producers sell their wet parchment or cherries to community wet mills or cooperatives.

My interviewees tell me that Typica and Mundo Nuvo are common varieties, along with small amounts of Robusta. Mundo Novo is typically associated with Brazil, and is known for its sweet profile with good body and low acidity.

José Pablo says that washed processing is common, but it’s not the same as what you’ll see in Latin America. After the coffee is depulped, it is deposited in its mucilage in dry wooden boxes where it ferments for 24 to 36 hours. He tells me that this gives the coffee sweet, fruity flavours in the cup. 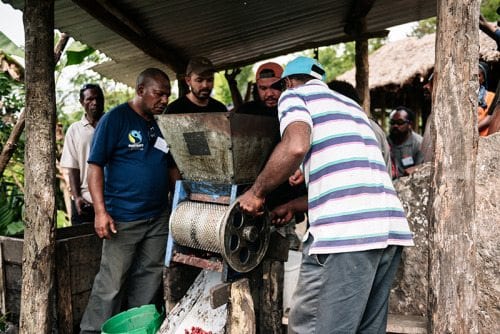 There are many challenges facing Papua New Guinean producers, but one of the biggest is logistics. Scott Bennett, Managing Director at Bennetts Importers in Australia, worked in Papua New Guinea in the ‘90s. He tells me, “It’s not an easy country. There are poor roads in between mountains, which makes shipping a bit unstable.”

Nevertheless, the country has had a presence in the Australian and New Zealand markets for over 50 years. Because of their proximity, shipping can take as little as two weeks, reducing costs as well as making it a convenient origin. 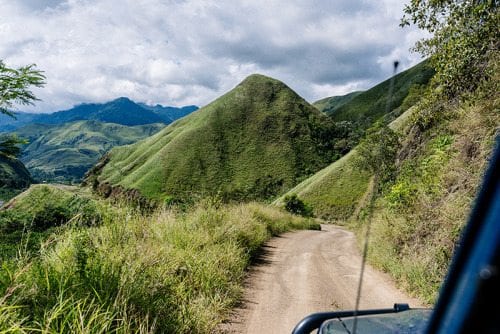 While coffee leaf rust doesn’t pose a major issue in the country today, there are environmental threats. The coffee berry borer, a small beetle that worms its way inside berries, lays its eggs, and then devours the cherry, is of current concern.

The CIC is appealing to the Papua New Guinean government for financial support in tackling this pest. Similarly, the Centre for Agriculture and Bioscience International is working to prevent and manage its presence and Fairtrade Australia New Zealand is providing in-country farmer training to applicant Fairtrade Certified coffee groups.

Another challenge faced by producers is ensuring crop consistency so that they can access the specialty market – but this is a slightly easier issue to tackle. 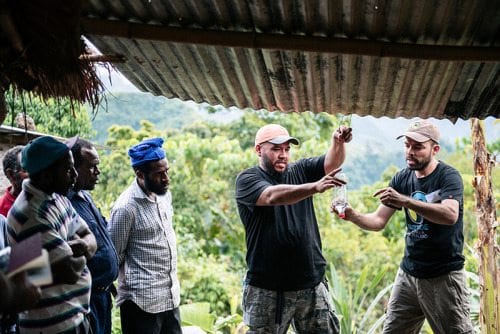 The specialty industry seems to be growing in Papua New Guinea, and there is also a move towards verified and certified coffees, such as Fairtrade Organic, Organic, UTZ, and Rainforest Alliance. Exports of certified coffee have grown by an average of 22% over the last five years, according to the CIC.

Will tells me that consistency is one of the keys to this. However, it is hard to achieve due to the small size of the coffee gardens and the wide geographic spread of the communities. It is not uncommon to see ripe and unripe cherries being mixed or coffees drying poorly.

However, coffees from Papua New Guinea have strong potential. If good farming and processing practices are followed, great results can be achieved. 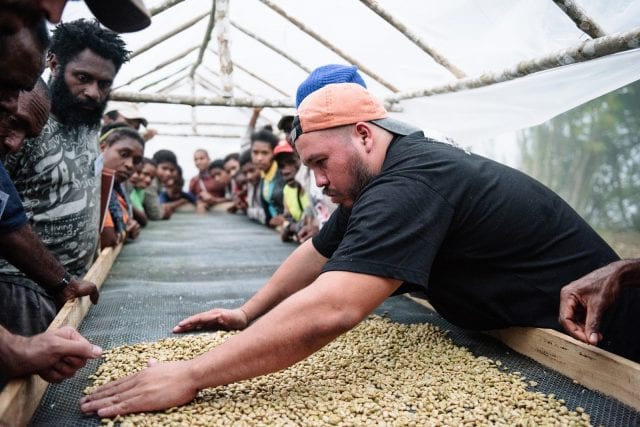 Will says that Papua New Guinea is quite different from other producing countries in that its coffee culture is relatively new. Production practices can require development and refinement.

Along with José Pablo, he has been leading 10-day intensive Fairtrade workshops on quality control and consistency. They’ve covered everything from harvesting, pest control, and cherry picking to testing processing practices, roasting and cupping. It’s part of a mission to help producers understand market demands and create a more quality-orientated system.

The fieldwork focused on the importance of consistency and included soil quality treatments, plant health and management, water quality, pest control methods and optimal coffee cherry ripeness levels. “With better practices in the field, and the transference of knowledge, we can achieve standardisation in production,” José Pablo tells me. (Translated from Spanish by the author.) 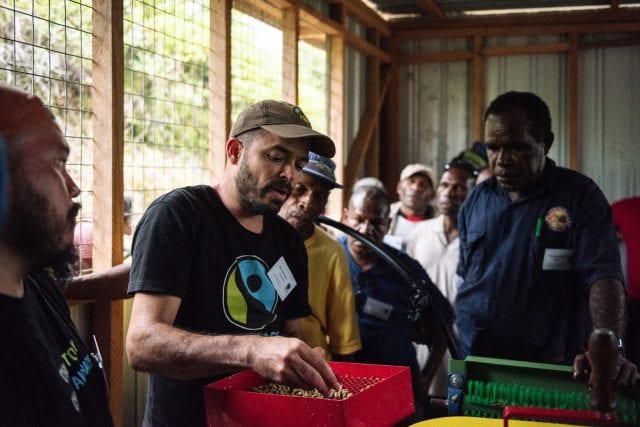 Four wet mill projects were initiated in in cooperatives (using Penagos Ecologic Coffee Wet Mills), along with drying beds, storage rooms, and equipment to control and monitor bean moisture. As part of the workshops, the cooperatives then trialed four different processing methods:

This allowed producers to start analysing the impact of different processing methods, and to understand the importance of controlling processing to ensure quality and consistency. 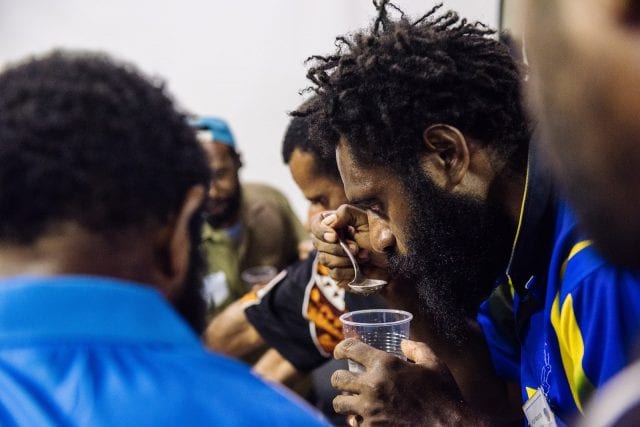 Next, they set up a quality control lab with small sample roasters and cupping equipment. There were theoretical and practical exercises in green coffee analysis, coffee defects, classifications, quality improvement, roasting, and coffee tasting. Will tells me that the trainees’ reaction to this was amazing. It demonstrated to them that all the steps in the coffee chain have a direct impact on the final cup. 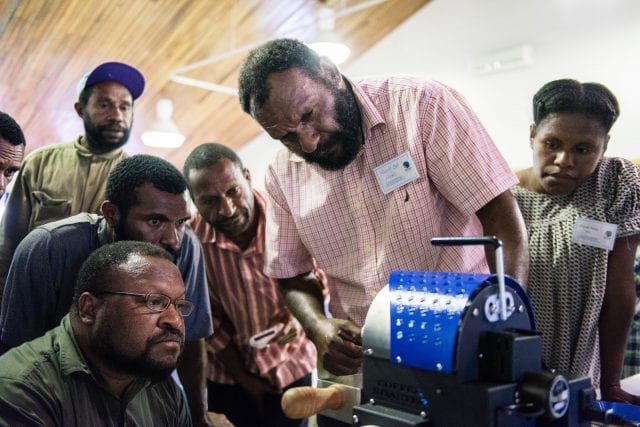 The training was designed to unlock Papua New Guinea’s coffee potential – and initial results suggest success. After training, samples were cupped both locally and by importers in Australia and New Zealand.

“Results were indeed positive,” José Pablo tells me. “Nine of the samples cupped scored a grade of 80 or more.” (Translated from Spanish by the author.) Will adds that he found very complex notes when cupping: apricot, raspberry, green apples, caramel, and plum, along with floral acidity and a sweet aroma.

And, just as importantly, Will and José Pablo emphasise how prepared the training left local producers to work towards the market demands for high-quality coffee. “It might be something cultural, but people here truly want to work…” José Pablo says. “There is a sense of community and the desire to become better.” (Translated from Spanish by the author.)

Scott Bennett of Bennetts Importers, Australia, tells me that training and education are “an important part of the coffee equation” for everyone in the supply chain. Farmers learn more, improve, and eventually earn more money. “If we invest our money in countries like Papua New Guinea,” he continues, “we are helping farmers and contributing to the development of the country.” 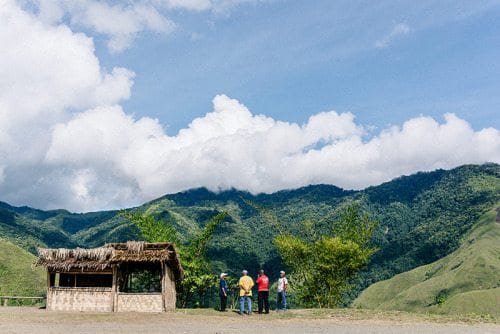 Papua New Guinea’s coffees hold great promise: sweet, fruity crops farmed by small communities. There are many challenges to face, but also great reasons to be optimistic about the future of this coffee origin. Growing awareness of market demand among producers, future quality training by Fairtrade, and investment from the international coffee community should combine to actualise growing levels of quality.

Please note: This article has been sponsored by  Fairtrade Australia New Zealand.  If you’re interested in learning more about their work in Papua New Guinea, or getting involved, please email them.