Saudi Arabia is a country of two coffee cultures: Arabic and specialty. With one, you have highly ritualized and historic coffee traditions that welcome guests. With the other, you have have a growing appreciation for lighter roasts and third wave brewing methods – and even some specialty coffee production.

Khaled Almadi of Elixir Bunn, a roastery and café in Riyadh, agreed to talk to me about how these two traditions live side-by-side – and how he expects Saudi’s specialty industry to keep growing.

What Is Traditional Arabic Coffee?

Traditional Arabic coffee has a long history and great social significance – so much so that UNESCO has labeled it an Intangible Cultural Heritage. UNESCO describes it as “a ceremonial act of generosity”, and it can be used to welcome guests, celebrate weddings, and even apply pressure in negotiations should a guest refuse to drink it.

Khaled says, “The ritual mainly takes place in homes, Bedouin tents, or at events. In cafés and restaurants, the ritual is not entirely compliant due to the commercialized aspect of service.”

Traditionally, the coffee beans would be roasted in front of the guest before being ground and brewed in a dallah , a beautiful Arabic coffee pot. Nowadays, however, the beans are typically roasted in the kitchen. Spices, such as cardamom, are often added.

The drink should be poured with the left hand and served to guests with the right hand. These guests should then consume it without sugar – despite the bitter taste. A bowl of dates may be provided to sweeten the taste, and it’s traditional to drink one to three cups. 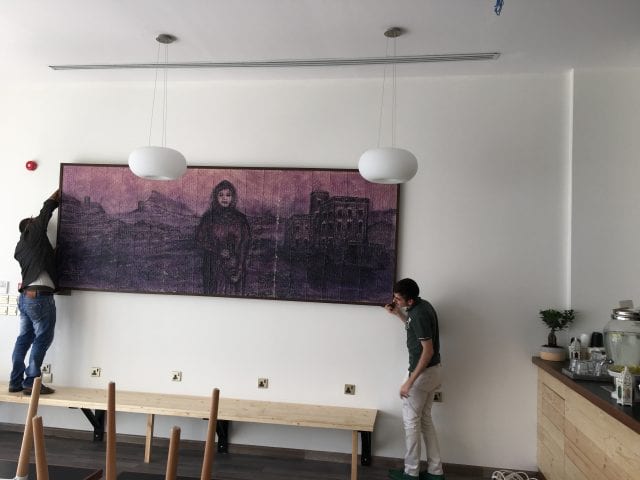 Saudi Arabia’s coffee is steeped in tradition, but Khaled tells me there is room for specialty coffee culture as well. He sees the two thriving simultaneously.

In fact, because the Arabic coffee ritual is difficult to duplicate in cafés, Khaled says that there is a gap to be filled by other coffee trends. Many of his customers may drink Arabic coffee at home with guests, but they will also consume specialty coffee – either at home or in his café. They just needed to be introduced to it first.

Non-Arabic coffee entered the mainstream, he continues, when international chains appeared in Riyadh. Establishments like Dunkin Donuts familiarized people with filter brews. And as those international chains “normalized” filter coffee, it was easier for third wave coffee shops and roasteries like Elixir Bunn to exist. 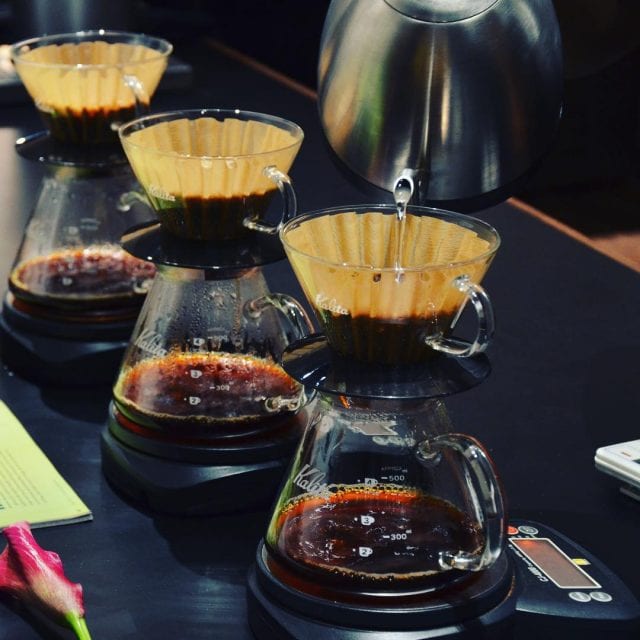 Elixir Bunn has seen a 220% growth since opening, with practically no marketing budget (they use social media for organic reach). Their success, Khaled tells me, lies in a focus on three things: quality products, quality service, and coffee education. And the latter is key to the development of Saudi’s coffee scene.

Khaled tells me that Elixir Bunn makes coffee education available both through the website and in the café. What’s more, it grows with its customers: as his staff shares information about coffee producers, origins, and processing methods, their customers share their thoughts and preferences.

What’s more, specialty is appealing to different demographics. Gender segregation is expected in Saudi restaurants and coffee houses. In fact, in 2016, the Starbucks in Riyadh was required to stop serving women after the barrier between the “bachelor” and “family” areas of the café collapsed. However, Khaled has recently expanded in order to serve women in a dedicated area of the coffee shop – a sign of the growing interest in third wave coffee.

This interest is also extending to competitions. In 2016, Saudi Arabia saw its first ever AeroPress Champion. And this year, Sara Al-Ali was a finalist in the World Cezve/Ibrik Championship.

Of course, specialty coffee is still a young tradition in Saudi Arabia, with much to build towards. Khaled says, “We’d expect a smoother ride when we create a specialty coffee association of Saudi Arabia.” But its quick development holds great promise for the region’s third wave. 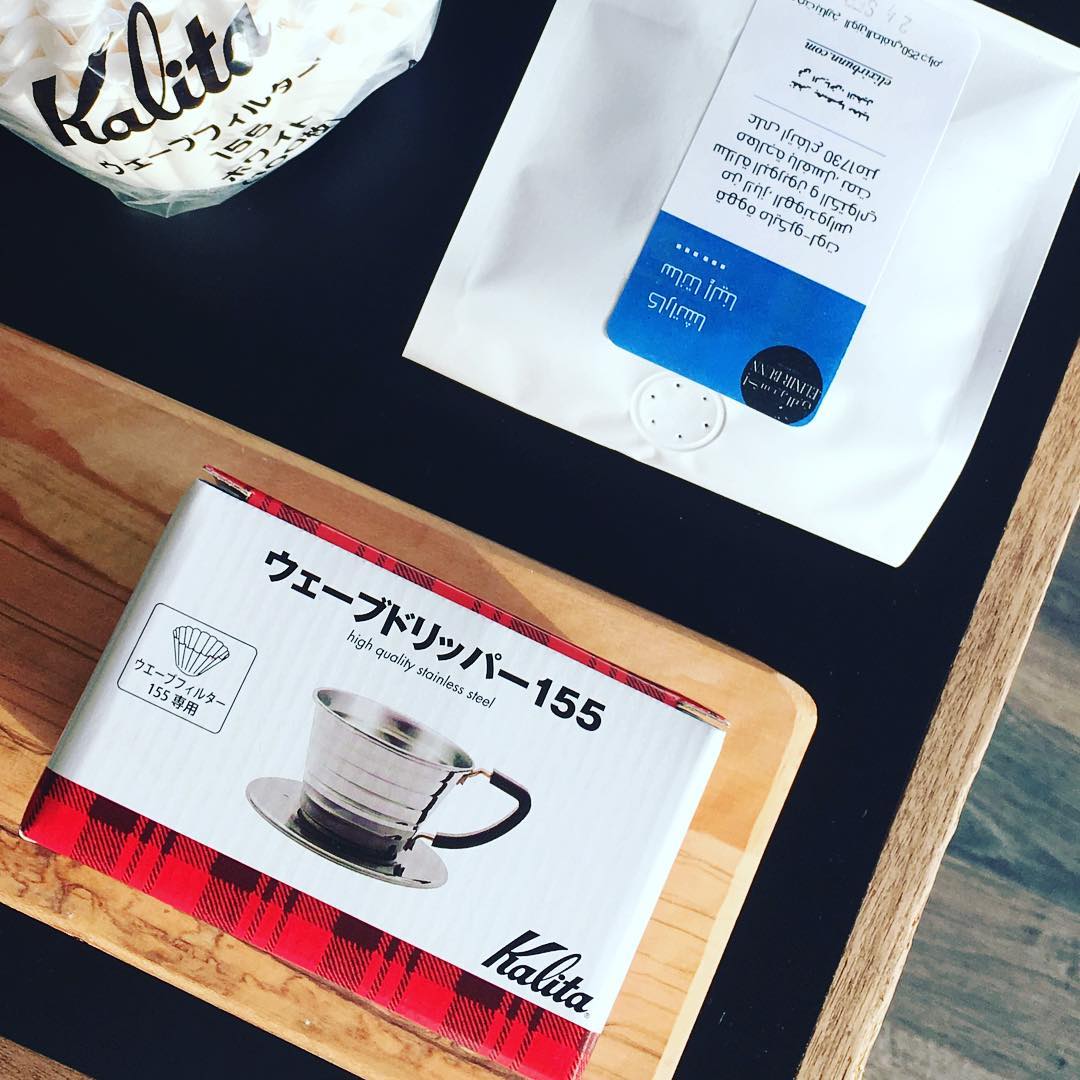 Khaled explains that it takes a few months for customers’ palates to adjust to specialty coffee. However, once they develop a taste for it, they are eager to explore different brewing methods and origins.

He’s noticed that the most popular specialty regions tend to be Colombian and Brazilian. There’s also an uptick in East African coffees – partly because of Saudi Arabia’s geographic location. What’s more, while it’s difficult for many other countries to import Yemeni coffee, it is abundant here.

And earlier this year, Saudi Arabia produced its first ever specialty coffee crop. Time will tell how Saudi customers respond to coffee grown in their own country. 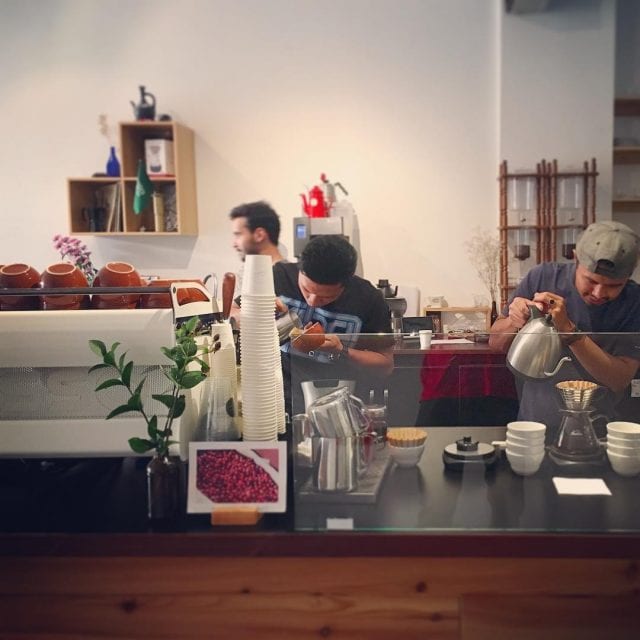 Saudi Arabia’s specialty coffee crop is the fruit of years of work. The country has mainly a desert climate, with high daytime temperatures and low nighttime ones. There are only two exceptions to this: a strip of steppe in the west, and a small, humid region, with mild temperatures and long summers, just north of Yemen.

It is in this humid area, in the region of Addayer, that Saudi Arabia’s first specialty coffee farms exists. Sitting less than 15 miles away from the Yemen border, Addayer – along with other nearby counties – holds great potential for coffee production.

This year, the farms produced natural and washed coffee. Some of the lots were then independently cupped at 80, 81 and 84 points. Khaled tells me they show “promise”. He describes them as having “typical notes” for coffees cupping in the low 80s – chocolatey, nutty, and so on – but with a “surprising sweetness”.

It’s an exciting start for a new specialty coffee origin. 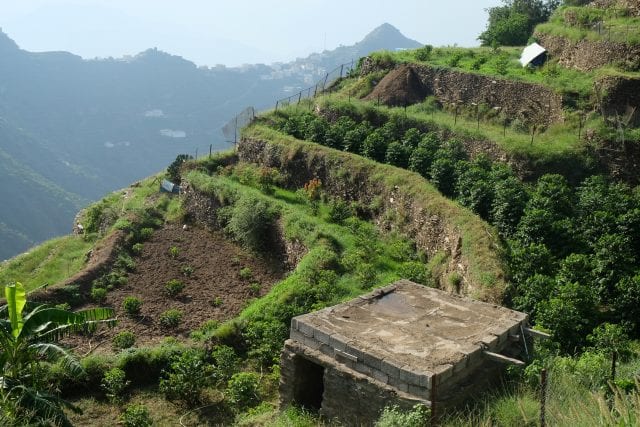 Traditional brewing methods and hospitality, third wave roasters and consumers, and even coffee production – Saudi Arabia’s coffee culture is rich, complex, and still growing. And with ambitious industry leaders pushing it forwards by building specialty coffee farms and competing on the world stage, it will be interesting to see how the region develops.