How Does Pressure Affect Espresso Quality?

What makes a perfect espresso, well, an espresso? Pressure. Sure, there’s also the crema, the size of the drink, and the concentrated nature of the coffee, but in the end, it all comes down to pressure.

But why is this so important? How does it affect espresso recipes? And why is nine bars so often the recommended amount of pressure?

I had plenty of questions about pressure, so I spoke to Stephen Kim of Cafflano to find out the answers. Cafflano, which has already won awards for its manual coffee brewers, the Klassic and the Kompact, is about to Kickstarter the first handheld espresso maker capable of a sustained nine bars of pressure throughout the entire process. Who better to explain pressure in espresso to me?

Here’s what I found out. 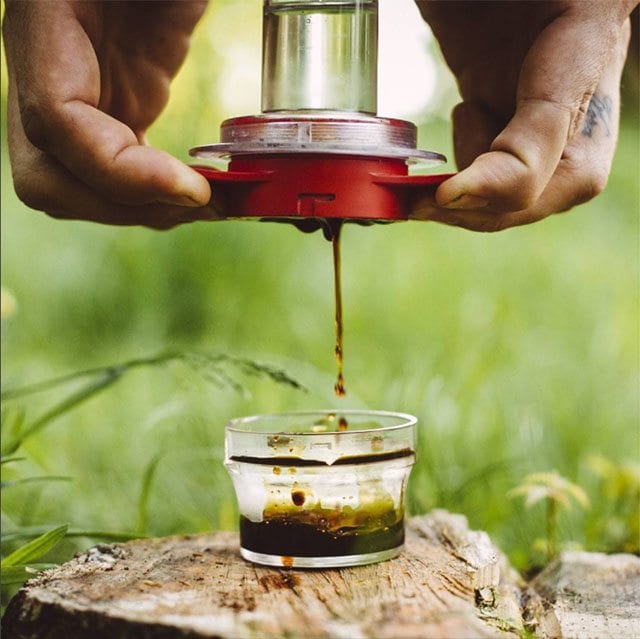 Pressure is measured in barometric pressure (also known as atmospheric pressure). This is the force exerted by the atmosphere. Basically, it’s the weight of air at sea level.

When making espresso, you usually want nine bars of pressure, or nine times the weight of the pressure at sea level. “Espresso has a long history, and nine bars is known to be the optimal pressure used to extract the best espresso,” Stephen tells me.

To gain some perspective on this, think about pumping up your car or bicycle tire. Most car tires specify that you should pump them up to 32 PSI, pounds per square inch, while on bicycles it might go as high as 65–85 PSI.

Nine bars, however, is the equivalent of 130 PSI – over four times as much as a car tire. 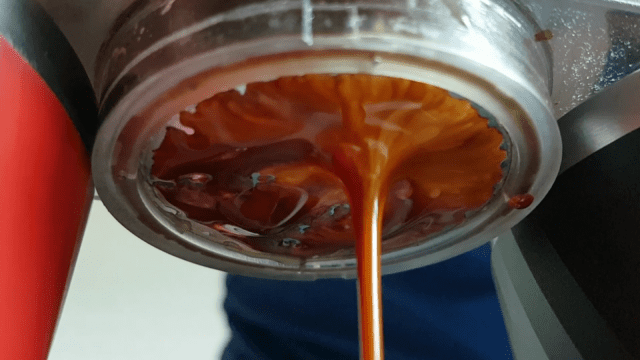 Imagine taking a high-pressure hose and blasting 130 PSI of water through your coffee grounds. It would make a heck of a mess. This means we need to control the manner in which those nine bars of pressure are applied – which takes us to the heart of espresso theory.

How do we manage the pressure? Through forming an espresso puck and controlling the time which we extract the coffee for.

Let’s have a look at the puck first. In order to avoid that mess mentioned above, we need something that will offer resistance to the water being pushed through the grounds.

So first of all, we ensure that the grind size of the coffee is very fine. Any coffee can be used to make espresso, but it has to be ground finely and then tamped into a portafilter, creating a puck. This results in a dense, uniform surface area that will offer resistance to the water.

Now let’s look at time, which is a little bit more complex. 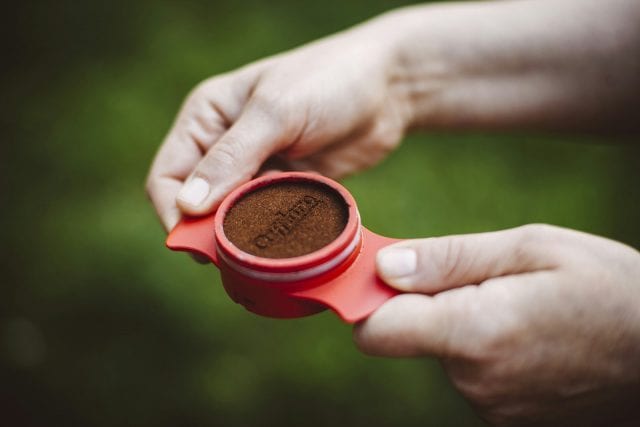 For espresso, a fine grind and compact puck is necessary because of the pressure. Credit: Cafflano

It’s a little more complicated than this, however, because coffee also needs time to properly extract. Even if you increased the pressure astronomically, drinking a 12-second espresso shot is not going to be a good experience.

The exact amount of time needed for extraction depends on a lot of factors: grind size, the coffee itself, water temperature, yield, and personal preferences. And as we’ve already discussed, we have very little flexibility with the grind size.

This means that dose, yield, and time are your main variables for espresso recipes (unless you’ve got access to a professional espresso machine that can control pressure and/or water temperature).

There are some people who also like to vary their pressure: starting off with low pressure for a pre-infusion before ramping it up to nine bars, and then decreasing pressure to match towards the end. Maxwell Colonna-Dashwood has advocated for the use of six bars of pressure. As always, with coffee, there are more things to learn and our ideas around extraction are constantly evolving.

However, for now, nine bars remains the benchmark. In fact, controlling pressure is something that can only be achieved on high-end espresso machines with pressure profiling capabilities.

Why would you want to adjust variables such as grind size and water temperature? Let’s take light and medium roasts as an example. Roasting degrades the cellular structure of coffee beans, making them more soluble. Light roasts, being less roasted, are in turn less soluble. This can lead to under extraction – i.e. a more acidic, almost sour, flavor profile – unless the recipe is manipulated to match. (This is why many roasters create “espresso roasts”, which are darker than their filter counterparts.)

So, to sum up: there are a lot of ways to manipulate espresso recipes, including changing brew time, grind size, water temperature, pressure, and more. But for espresso, you want a fine grind, and nine bars is generally considered the magic number for pressure. This, in turn, dictates a time of 25–30 seconds.

Of course, there are also many other aspects that are key to great espresso: the tamp, the coffee roast date, the coffee dose, bean density, equipment quality, portafilter basket size, water hardness, room temperature… But those are all topics for other articles. 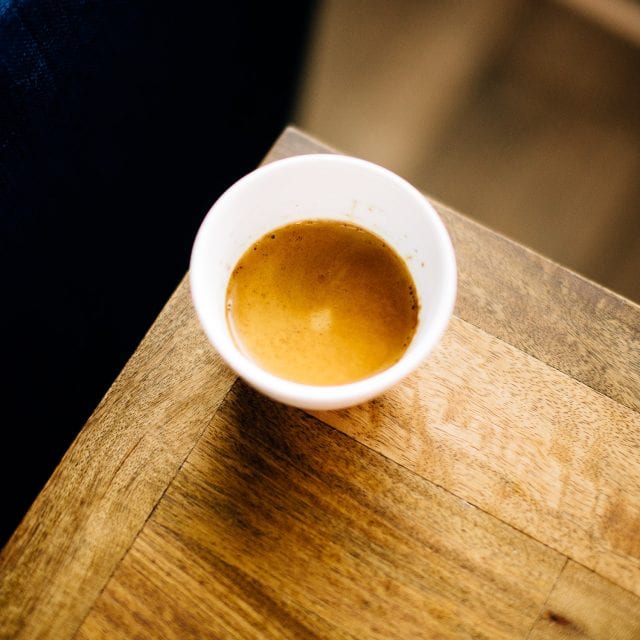 The perfect espresso shot is the result of control over numerous variables. Credit: Michael Flores

There’s one more point of confusion we should look at: crema.

This is the beautiful golden cream that sits on top of freshly brewed espresso, and it “is created when ground beans are infused and pushed by over seven to nine bars of pressure,” Stephen tells me.

Crema is produced by the fats and oils in the coffee, and although it’s often been considered a sign of a good espresso, it really depends on the beans. For example, washed coffees often produce less crema. The presence of crema shouldn’t be relied on as an indicator of quality.

That being said, crema certainly looks pretty (and customers like it too!) And you won’t get it without enough pressure. 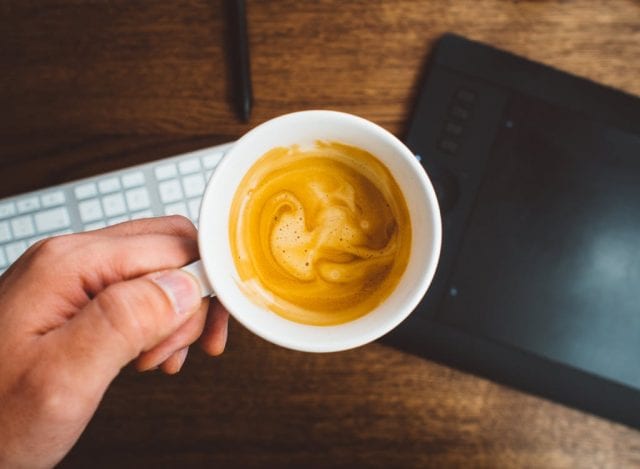 How do we apply an entire nine bars of pressure for the whole period of extraction? Most commonly, through pistons/levers, steam power, or pumps.

The original espresso machines used levers and many coffee shops still rely on them today, as they give the ultimate control to the barista. To operate the machine, the lever is pulled up and the heated water is sucked through the portafilter in a vacuum. They require a greater skill set and experience to operate.

Steam machines, on the other hand, boil water and the steam that forms from this process is forced through the coffee grinds. This method doesn’t allow for the bars of pressure needed to make that crema.

Pump espresso machines are what you’re most likely to encounter at your local café, and they have added mechanics that use a pump to maintain the pressure of the water. 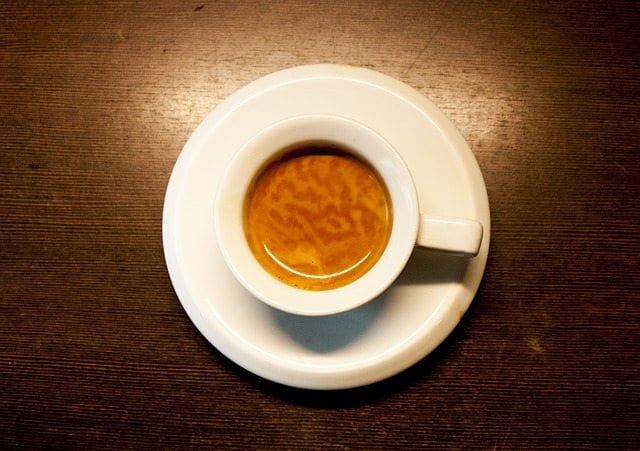 Complex machinery is required to create an espresso.

Due to the mechanics and precise calibrations needed for that perfect pull of espresso, there’s speculation about how accurately home machines can maintain their pressure over the full extraction time – especially on more affordable models.

However, companies are constantly improving their technology.

In a patent-pending move, Cafflano, for example, is using Pascal’s Principle to created maintained pressure in their portable espresso-maker, the Cafflano Kompresso. This means they’re utilizing hydraulics.

Pascal’s Principle states that “a pressure change occurring anywhere in a confined incompressible fluid is transmitted throughout the fluid such that the same change occurs everywhere.” As confusing as that may be, what it means is that if you push fluid down a cylinder that is smaller in diameter than the cylinder you’re pushing up to, the force is amplified. 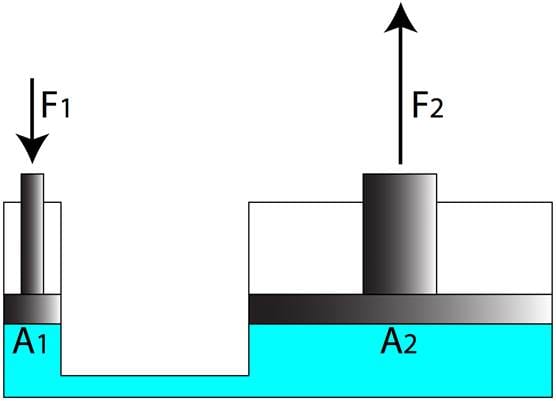 Back to our automotive examples, the hydraulic lift you see at the garage that raises up your car with relatively little exertion uses Pascal’s Principle. And this is also the technology being used in the Cafflano Kompresso to ensure it can maintain pressure throughout the entire process.

Cafflano have also added a squeezing, rather than pressing, motion on the user’s part to increase the pressure. The result? The Cafflano Kompresso is less than 200g in weight – far smaller than the average prosumer espresso machine. However, it creates a sustained nine bars of pressure while making 15g of espresso. 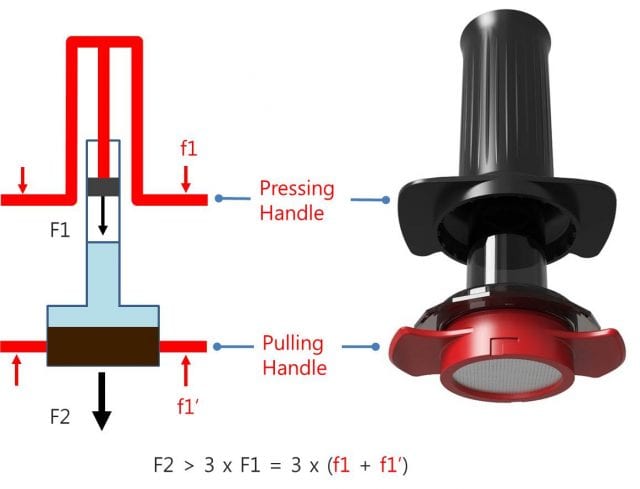 Any time you make coffee, there are so many factors at play: the water source, temperature, bean freshness, roast profile, the passion of your barista… But if you want true espresso, then you’re going to need pressure. And most of the time, it’ll be nine bars of it.

Please note: Cafflano is a sponsor of Perfect Daily Grind and was consulted in the creation of this article. They have received a courtesy copy of the article prior to publication but have exerted no editorial control over the final copy.