Where Is The Coffee Industry Going Next? Insights From WOC 2017

World of Coffee (WOC) 2017: 3 days, 5 coffee championships, 11 awards, hundreds of stalls, and some of the leading figures in the coffee industry. If you wanted an insight into the future of the coffee industry, this was one of the best places to go.

And that’s exactly what we set out to do. We interviewed café owners, roasters, equipment manufacturers, competitors, coffee associations and more to discover their thoughts on what specialty coffee will see in the next 12 months. Here’s what they had to say. 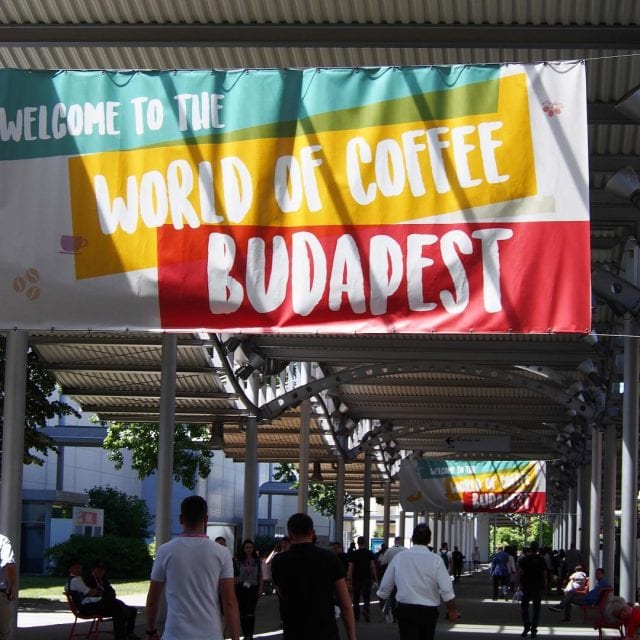 Joyce Klassen, Marketing Manager at Baratza, tells me that that for the last few years they’ve been thinking that the third wave coffee boom would slow down and growth would flatten, yet it never happens. More and more consumers are learning about coffee, and getting into speciality coffee. The industry keeps growing and growing.

Kyra Kennedy, Baratza’s Co-Founder, adds that she’s seen this particularly in the southern United States, as well as in Eastern European countries like Georgia. And Saudi Arabia, along with other Middle Eastern countries, are purchasing a relatively large amount of Baratza’s high-tech grinders. 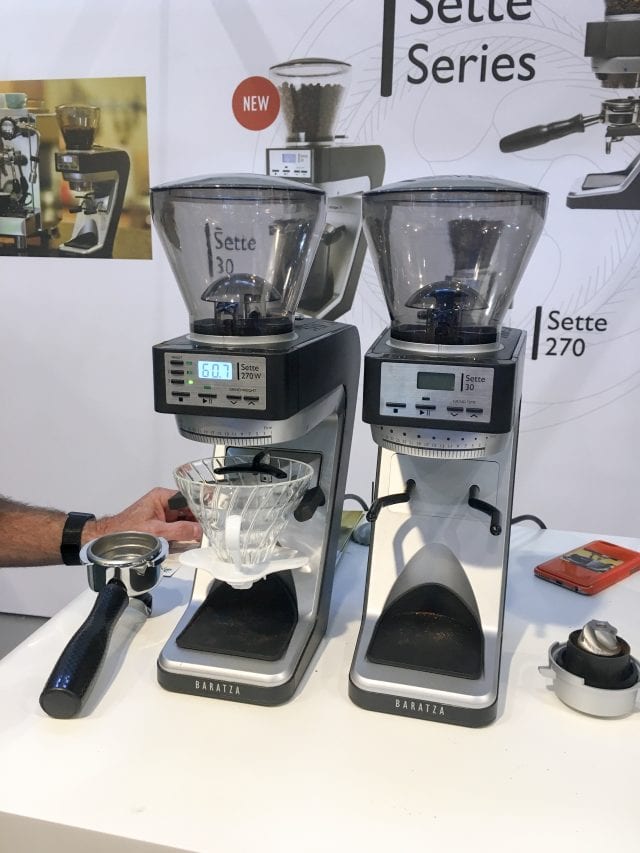 But it’s not just your average specialty coffee shop that is popping up everywhere. Andrea Allen, Co-Founder of Onyx Coffee Lab and two-time first runner-up in the US Barista Championships, tells me that she predicts increasing coffee shop diversification in the US.

“I’m seeing a lot more ‘coffee and something’,” she says, “and that ‘something’ isn’t just, ‘oh, here’s a muffin’, but it’s actually really good.”

Chalo’s Chai and Flor de Café’s coffee-flower candles and perfume both collected a SCA Best New Product award at the show. Add to this a Re;co Interactive programme featuring craft beer, wine, and cheese, and this year’s event demonstrated a clear interest in alternative products.

And this is good news for the industry: specialising in additional products is an easy way to reach wider audiences, whether you’re serving craft beer or bagels. What’s more, with the increasing number of coffee shops opening, it can help cafés to stand out.

Speaking of new audiences, Mark Pearce, who works in Training and L&D at Toddy LLC, tells me that the growth of cold brew coffee is spurred by a “whole different market”. Cold brew, he continues, “is taking specialty coffee to the general coffee market”.

In the US, he tells me that cold brew consumption is driven by people aged 14-40. Some of these people don’t even drink regular coffee yet – but cold brew, with its sweeter taste and variety of recipes, makes it an appealing option for this demographic. “The method allows us to highlight the sweetness of the bean over acidity,” Mark explains.

He also adds, “It’s not just coffee, or coffee with milk, but it’s coffee with sparkling water, or anything else you want.” And he believes that only increases its appeal among younger drinkers. 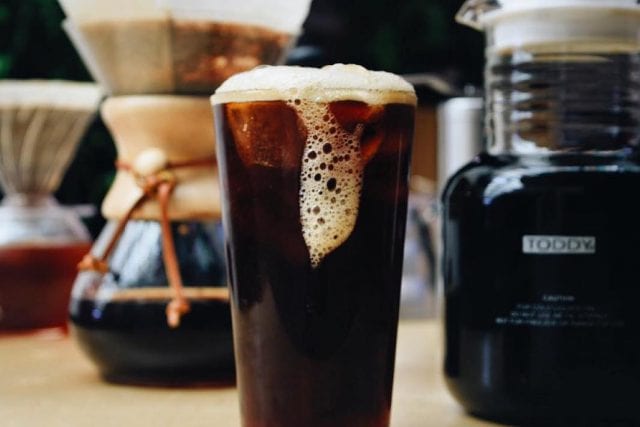 In the US, cold brew consumption is driven by a younger generation. Credit: aether

“The line between the old coffee market and the specialty is going to narrow, and then cross,” he predicts, listing third wave versions of batch brewers, coffee capsules, and instant coffee. It’s first and second wave technology designed with a third wave focus on quality and details. 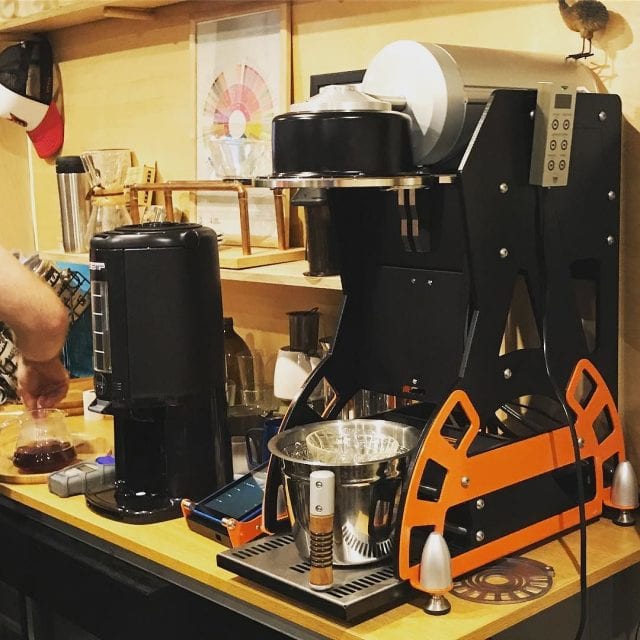 Yet while technology may be looking to the past for inspiration, this is not your grandparents’ coffee equipment.

Tom Hopkinson, Roastery Manager of Cloud Picker Coffee Roasters, Dublin, tells me that technology “is continuing to take human error out of it”, with grind-by-weight capabilities the current focus. It’s greater automation but also greater precision.

Similarly, Marco won Best New Product: Commercial Equipment Electrical in both Seattle and Budapest for the MIX. This volume-controlled hot water dispenser offers three programmable temperatures, meaning you can be sure your baristas are always using the correct temperature for their coffee – without losing time or efficiency.

It’s particularly useful for those shops also serving specialty tea, where it’s important to use different temperatures for black, green, yellow, and white leaves (another indicator that specialty coffee is looking at cross-industry offerings).

In other words, third wave coffee may be expanding its definition, but innovation and quality remain priorities. 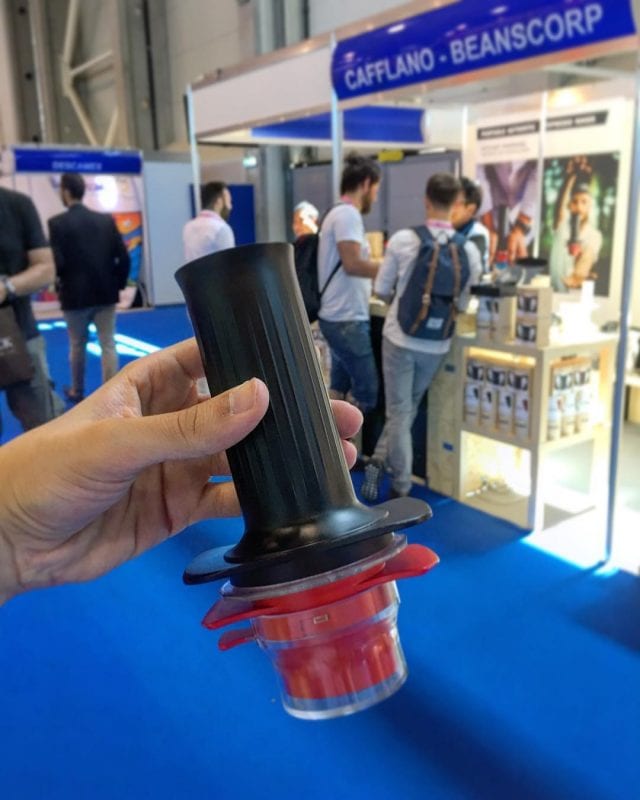 Giovanni Giaquinta, Communications Manager at Dalla Corte, agrees that the quality of coffee and of coffee technology are growing together. “Baristas use technology to improve quality,” he explains.

“The interaction part of new technology is great. Before, we just had the machines. Now, we have apps. It’s much more interactive and much more social. Baristas can share recipes among each other, and with their customers too.”

Similarly, the Best New Product: Technology went to the RØST sample roaster, an innovative 100-gram roaster that blends fluid bed and drum technology for the greatest consistency in roasting. It also comes with an app, allowing users to record, monitor, and control the roaster via WiFi. 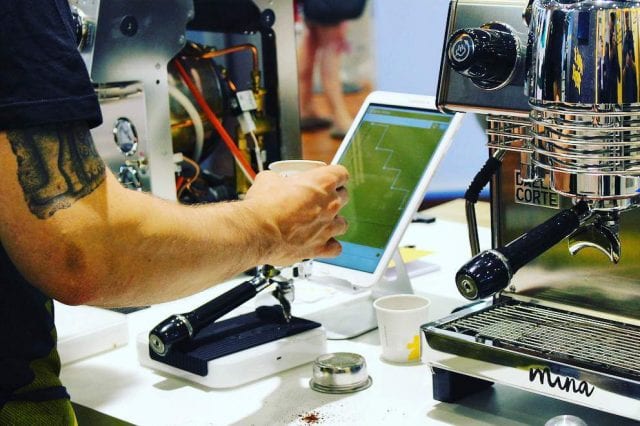 Yet while technology takes centre-stage, the industry is also looking back to basics.

Tetsu Kasuya, 2016 World Brewers Cup Champion and Coffee Consultant (currently working with Hario), tells me, “In my opinion, the hottest trend is water for brewing.” He believes it’s been visible in the World Barista Championship for a few years, but has slowly made its way into the Brewers Cup and into consumers’ consciousness.

“I’m also learning about water,” he continues. “Magnesium, calcium, bicarbonate… The water has a very, very strong effect on the taste, more than I had expected.” 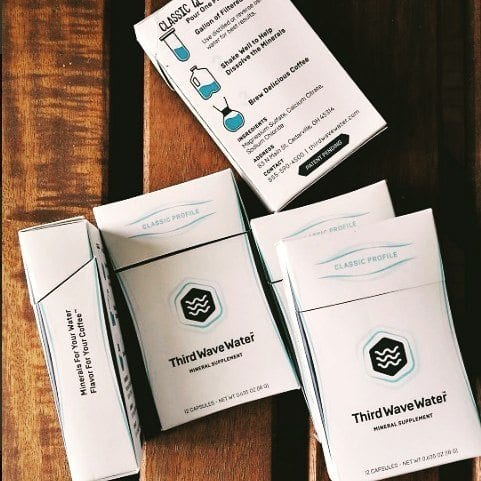 James Healy, Commercial Director at Marco, says, “There’s an increasing awareness of all aspects of temperature and purity in terms of the impact on all beverages.”

He tells me that there are three elements to this: water can affect the taste of the beverage, it can affect the performance and longevity of the coffee equipment, and it can vary across geographic regions.

Products like Third Wave Water have already made a splash (pardon the pun). Expect to see more conversations about the biggest ingredient in your brewed coffee in the near future. 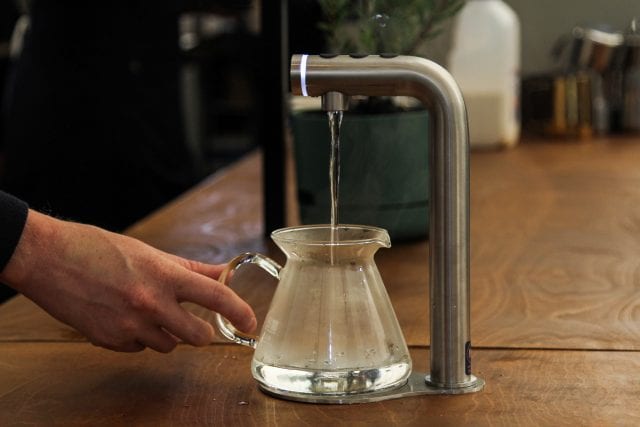 It’s not just coffee consumption trends that were made evident at WOC. A number of people were also talking about production methods and producer-consumer relationships. And much of this centred around coffee processing.

Melanie Ann Leeson, Director of Marketing & Development at Collaborative Coffee Source, tells me, “I think that there’s going to be a sustained focus on processing at origin, and on varieties.”

Yet for her, the news is “double-sided”. “It’s great,” she tells me, “for consumers to learn about these things and for producers to learn how to market them.”

But she’s also aware that some producers will be better able to take advantage of this trend than others. Issues such as land rights struggles, abject poverty, and poor infrastructure can leave some producers unable to focus on exploring processing methods or varieties. 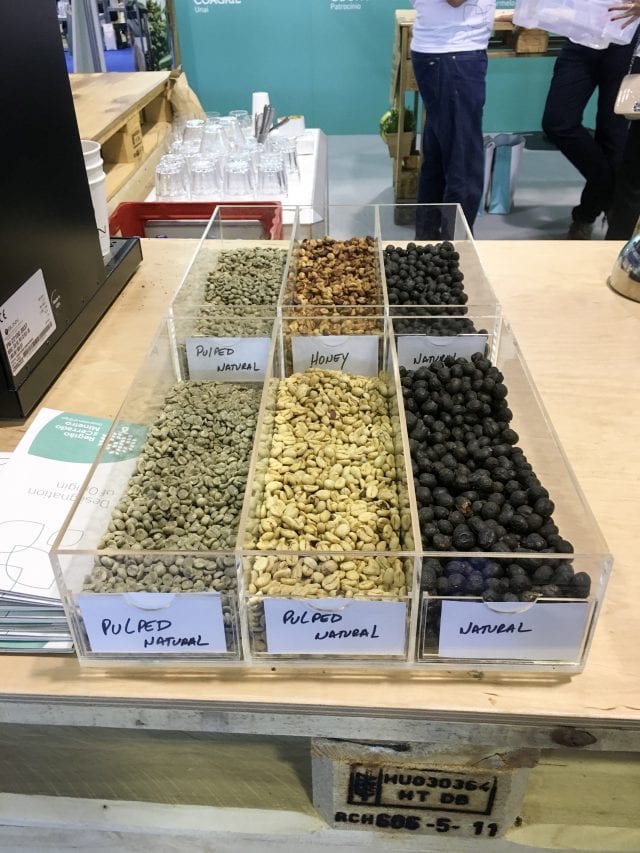 The Gap Between Consumer & Producer Developments

“I wish,” Melanie Ann Leeson continues, “that people would, with how rapidly things are changing on the consumption side, realise that things don’t always change that quickly at origin.”

For her, more trips by roasters, baristas, and coffee buyers to farms is the way to promote cohesion between both sides of the coffee chain.

Mariana Proença is the Content Director at Brazil International Coffee Week, which brings together 800+ producers across Brazil with international coffee professionals. She has a similar opinion to Melanie, telling me, “I think the most important thing that we’ll have to look at in the world of coffee is how the farmers will have to connect their innovation [with consumers’ demands]. We have more farmers visiting these events, which is important. The producers are reading more and more that they have to know what the consumer wants.”

Caio Alonso Fontes, CEO of Brazil International Coffee Week, finds the trend of producers taking control of their processing to be particularly important. By understanding and controlling fermentation, he explains, producers can improve quality. “More control helps you select the coffee you want and produce what the market wants,” he says.

For this to improve further, he tells me, “We need that link from the consumer to farmer, so [the farmer] can see what the market wants.” 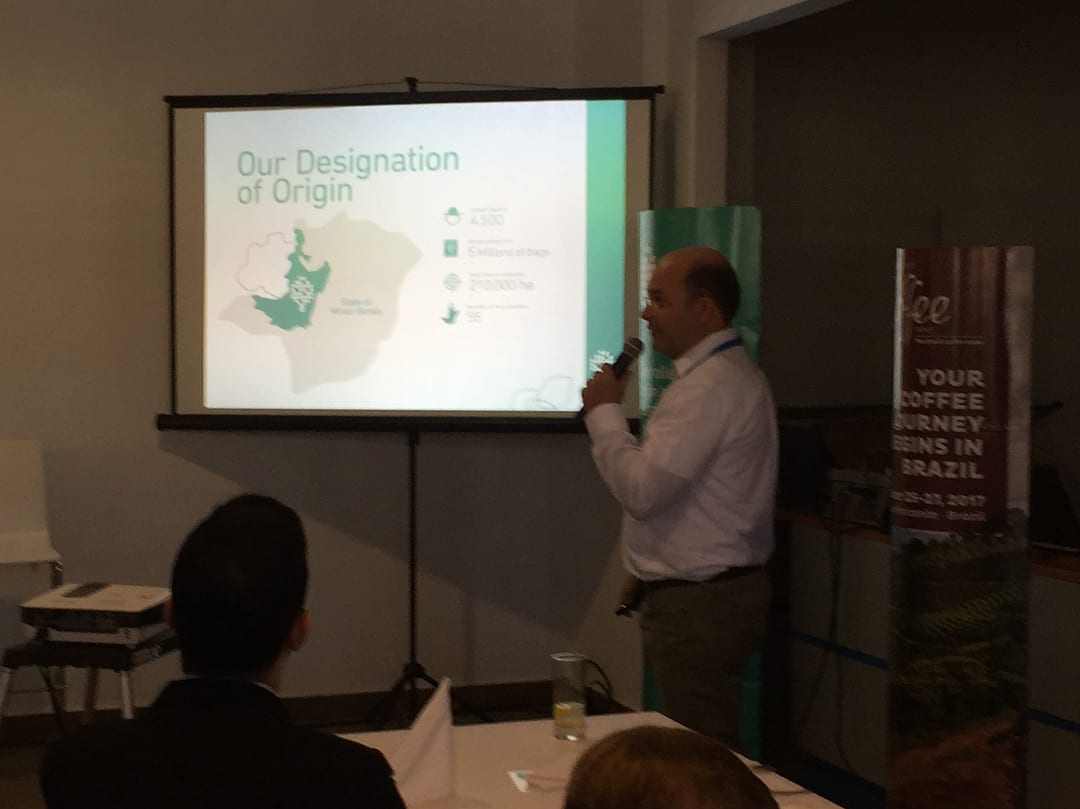 Cerrado Miniero explaining the relevance of Designation of Origin status to people all along the coffee supply chain.

Jon Allen, as Co-Founder and Coffee Buyer of Onyx Coffee Lab, spends a lot of time in producing countries (particularly Colombia, where much of the company’s coffee is sourced from). He tells me that he’s seeing a “much wider array of processing methods” – and, even more importantly, “acceptance of it”.

What’s more, he says that he sees this shift, not just among buyers and consumers, but also among producers who are responding to market demands. Raised beds, honey processing, lactic fermentation: he’s experiencing it all.

As a Judge in the Guatemalan Cup of Excellence, he tells me he also saw a notable number of natural coffees in the competition. While naturals often fare badly in coffee auctions, their increasing presence could go a long way towards their mainstream acceptance.

So too does their representation on the competition stage. 2017 World Brewers Cup Champion Chad Wang’s winning coffee was a natural processed Geisha. And Tom Hopkinson was a Judge in the 2017 Ireland Brewers Cup, where he tells me four out of six in the finals were naturals – although he’s quick to add that, in Ireland, the average consumer would still prefer a latte to a hand-brewed natural processed coffee.

Natural coffees can be risky to process and so, even now, there is backlash against them. Yet Jon points out that, for specialty producers with good resources, they can be a good choice for those with less finances to invest in infrastructure. These coffees require more labour to ensure consistency and quality, yet they also require less initial investment. 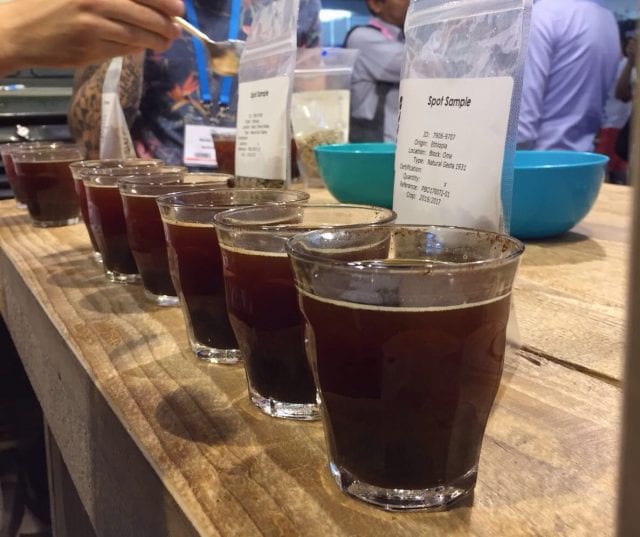 Earlier, we looked at Mark Pearce of Toddy LLC’s speculation that cold brew consumption is led by a sweet tooth among younger generations – among other factors, of course. He told me that natural coffees are particularly popular for their sweet notes.

Mariana Proença, Content Director of Brazil International Coffee Week, also tells me, “Year by year, the most important flavour is changing. It used to be acidity, but now it’s sweetness. We’re seeing this in the demand for naturals here in Brazil.”

World Championship coffees often lead the newest trends, so how did Chad Wang describe his winning coffee? It had pineapple acidity and honey sweetness. 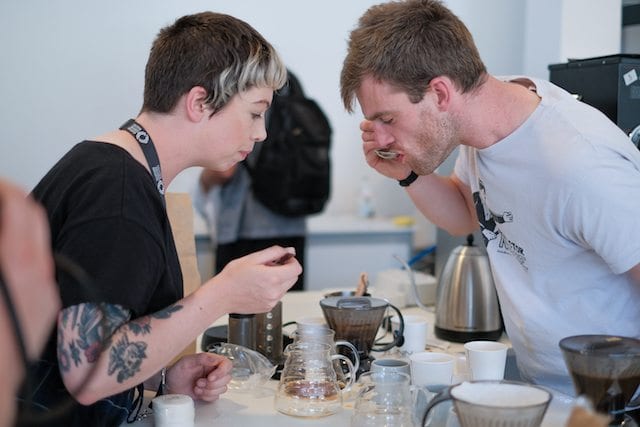 What flavour trends will we see next year? Credit: SCA UK

A year is a surprisingly short amount of time in the coffee industry. But some interesting trends are already appearing, and we have no doubt that 2017–2018 is going to see exciting developments – whether it’s in consumption, brewing, or production.