Myanmar captured my imagination when I was a child. And now, its coffee is capturing the attention of the specialty coffee industry. A producing region that was unheard of just two years ago, it’s making headlines for its nearly 90 points coffees – some of which have increased by 15 points in just one year.

I recently took a trip to Myanmar’s farms with the United States Agency for International Development (USAID) Value Chains for Rural Development project. Along the way, I gained insights into why the country’s coffees are so spectacular – and why they’re only now coming to the coffee industry’s attention.

SEE ALSO: How Myanmar’s Coffee Trade Is Dictated by Infrastructure 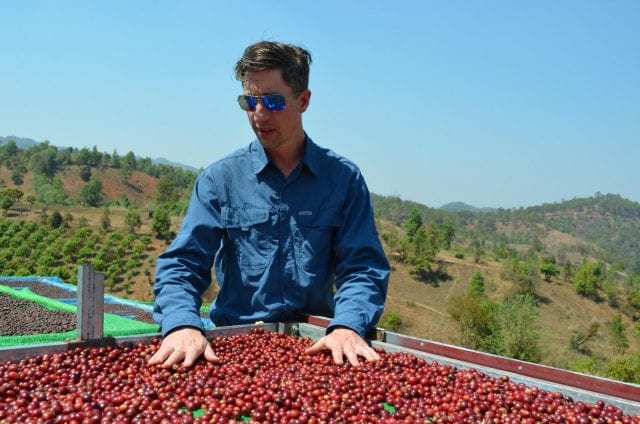 The first time specialty coffees from Myanmar were available in the Western world was at the 2016 Specialty Coffee Association of America Expo in Atlanta.

On hearing a rumor of a tasting there, I began desperately searching for the event. I didn’t find it in time, to my great dismay, but word of the standing-room-only cupping spread across the show floor. First reports hinted at extraordinary coffees, heightening excitement over a region already considered exotic.

Finally, I found the source of  the coffee: the Coffee Quality Institute (CQI) meeting room. Unfortunately, the samples were already packaged to return to Seattle. Without coffee bags or other containers nearby, I scooped up the precious cargo into any vessels I could find: a souvenir mug, a paper lunch bag, and an empty plastic water bottle. 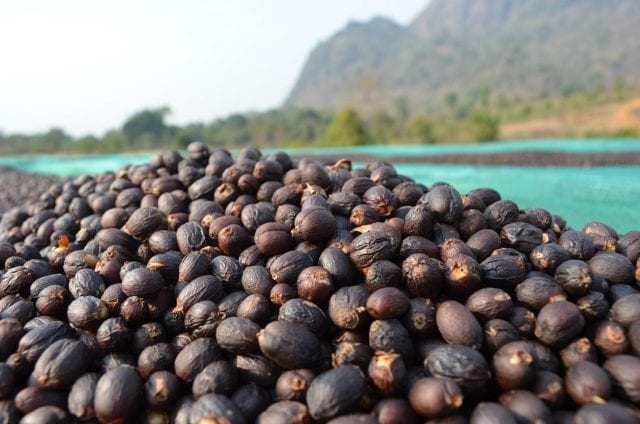 Back in my lab, the coffees did not disappoint: candied grape, green apple, sandalwood, and other spices danced in perfect harmony. I discovered it was from a small community called Mya Ze Di in a remote area of Shan State, and bought some more from Atlas Coffee Importers.

A year later, I went to Myanmar during the third annual Myanmar Coffee Association cup quality competition. The year’s top samples reached nearly 90 points on the 100-point SCA quality scale, with averages in the mid- to upper-eighties.

I felt childlike wonder, cupping the country’s best coffees and learning about how producers are so quickly improving their production and processing techniques. Just two years ago, these same communities had only ever produced commercial-quality coffee, in a tradition stretching back generations.

How have farmers achieved such remarkable improvements in such a short time? And why is it happening now? 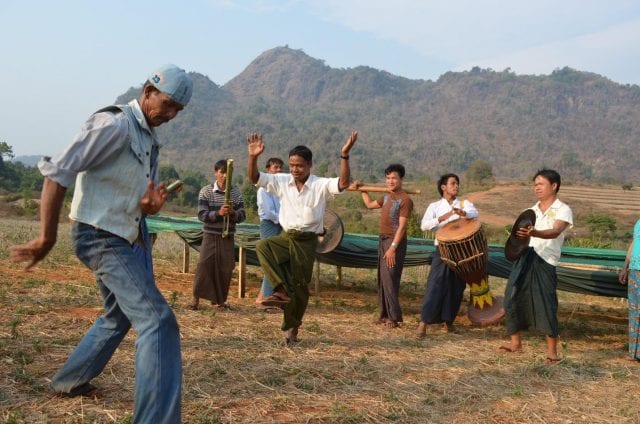 Mya Ze Di, the region my coffee came from, is not the kind of place you can find on a tourist map. Thankfully, on my trip, I had guides. It was an organized tour for international coffee professionals, hosted as part of the United States Agency for International Development (USAID) Value Chains for Rural Development project.

Hidden from the world for nearly sixty years, Burma (Myanmar) and its main city of Rangoon (Yangon), as they are still formally recognized by the U.S. Government, were places westerners could not visit.

We’ve already written about the difficulties years of isolationism has caused producers and buyers. A lack of infrastructure, from reliable electricity to ports, can make buying coffee – or even finding out about good coffee – hard. 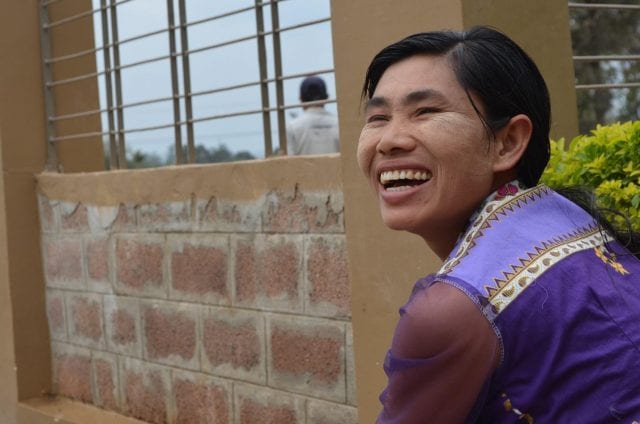 But democracy has blossomed in recent years, creating new economic opportunities for the country’s more than fifty-three million citizens.

As our plane started its descent into Yangon, the land revealed itself from beneath a blanket of haze. Hundreds of shimmering golden pagodas speckled the landscape as far as the eye could see. Intricate monasteries jetted up across the densely populated city. And I knew the coffee farms wouldn’t be far behind. 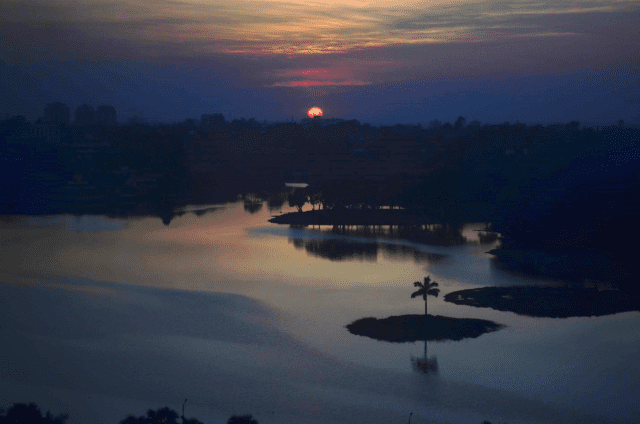 Myanmar emerged from diplomatic isolation in 2011. Since then, economic development projects have begun providing assistance for the country’s farmers, many of whom live in extreme poverty.

The five-year USAID Value Chains project started in 2013. Its goal is to improve food security and increase the market competitiveness of agricultural products in rural Myanmar. It had a particular focus on helping ethnic minorities and women.

Coffee has been grown in Myanmar for nearly two hundred years and is an important value chain in Myanmar. It’s a natural choice for USAID to focus on, with the collaboration of the Coffee Quality Institute (CQI). 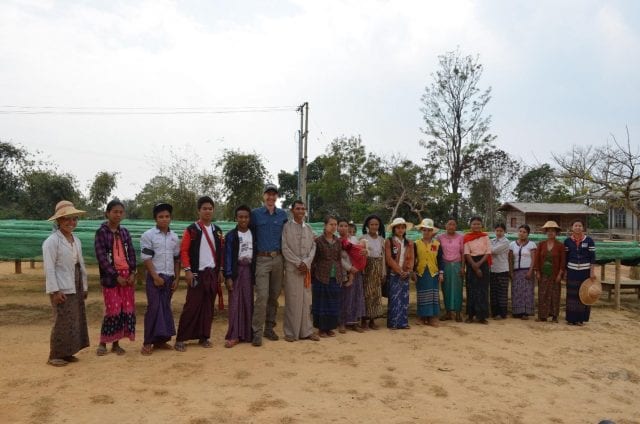 CQI provides technical services on the project for Winrock for the coffee value chain. The idea is to create value by improving crop productivity and quality, then provide access to international markets for trade. Their work goes from seed to port and touches everything in between.

Of course, coffee is not the only crop USAID targets. Others include include soybeans, melons, ginger, and turmeric. 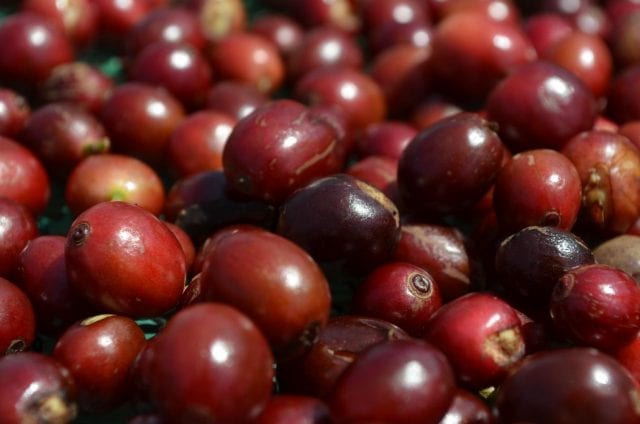 So how is USAID’s project being received in Yangon? My first insight came shortly after landing.

I was cheerfully greeted by a Winrock representative and escorted to our car. Passing through the automatic doors of the modern airport terminal, the cacophony of exhaust fumes, earth, burning trash, incense, and jasmine was a sudden shock to my senses. As we pulled away from the airport, cars, scooters, trucks and rickshaws weaved in and out in every direction in a chaotic dance.

The driver, a native of Yangon, has lived there his entire life. He told me he was excited about the work that USAID and Winrock were doing with coffee in Myanmar.

However, he spoke about the future with guarded confidence, projecting cautious optimism. This was a man who had experienced many years of oppression, and had a grounded view of the effort necessary to change a nation. 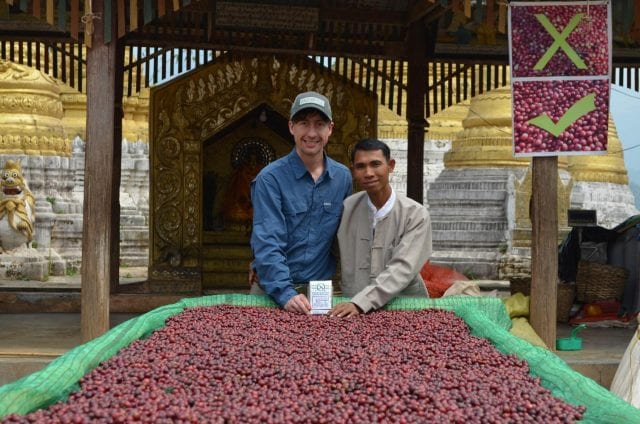 And, as you might expect, specialty coffee is very different to the local coffee culture. After several minutes of conversation, and no progress in the deadlocked traffic, my driver suggested a detour to a friend’s nearby coffee shop – a detour that terrified me with its breakneck driving, but was undoubtedly worth it. 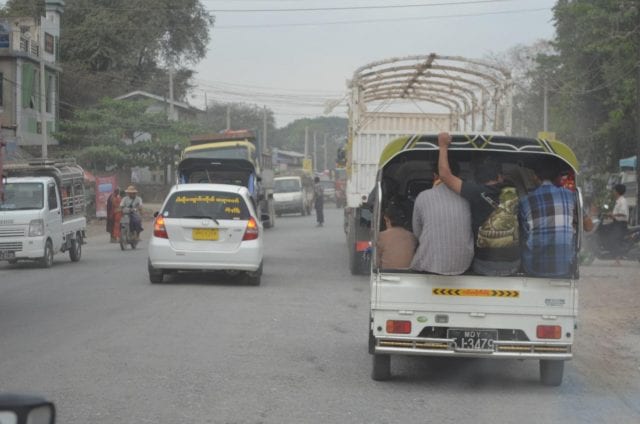 Three-in-one coffee is what the driver ordered for me: powdered milk, sugar, and instant coffee all in one convenient package. This form of sub-commercial quality instant coffee is widely consumed in Asia, as well as in-coffee producing countries worldwide.

We sat for a while, sharing three small teacups of this sweet, milk-forward, frothy brew. As the gridlock continued outside, we passed time smiling, laughing and taking funny photographs with the shop’s owner and the driver. 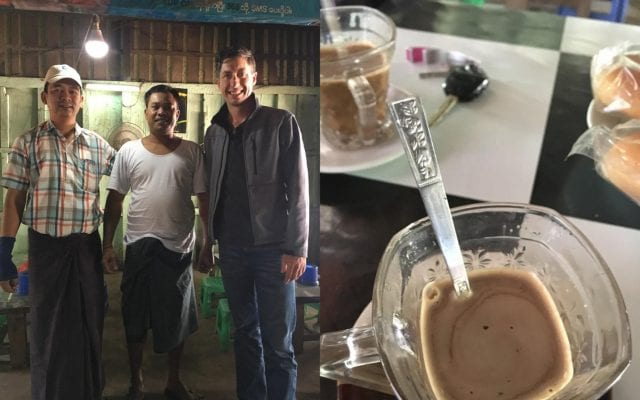 Over the following week, our journey took us to farms and drying stations across three primary coffee growing areas: Pin Laung and Ywangan in Shan State, and Pyin Oo Lwin in Mandalay Division (or state).

We met with farmers and community leaders representing all of the seventy coffees that we were tasting along the way. During every visit, we were greeted with traditional drumming and dancing, and enjoyed offerings of citrus fruit, desserts made with jaggery (an unrefined sugar), and other regional foods. 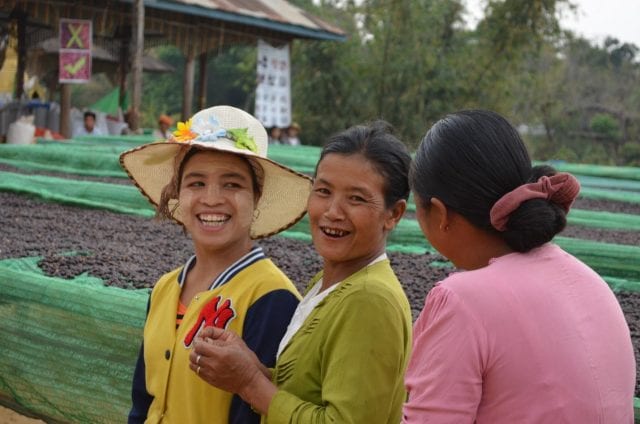 At last, we reached the community which had taken a special place in my heart, Mya Ze Di. As our convoy of vehicles rolled into town, hundreds of villagers were ready to greet us. They gathered along a fence as the thick red dust from the tires of our four wheelers settled.

Facebook is extremely popular in Myanmar. Even among poorer, rural villages, many have inexpensive Chinese-made smartphones, and internet service coverage is surprisingly good. The villagers had seen my Facebook posts and followed the promotion of their coffees over the internet. 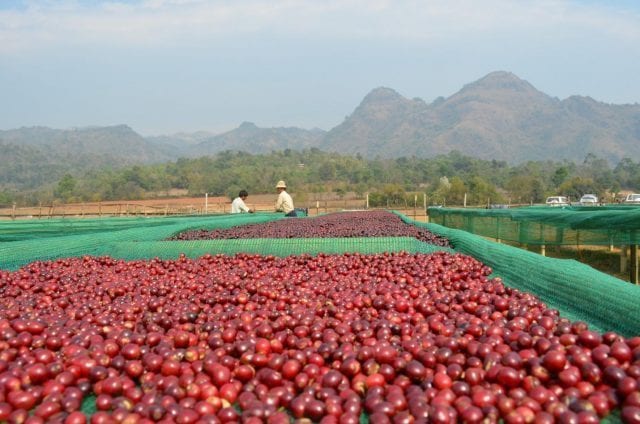 I was as excited to meet the community as they were to meet me. We exchanged gifts: they gave me a handwoven bamboo basket used to collect cherries. I presented them with a package of the community’s own coffee roasted in Boulder, Colorado. The circle of origin to consuming country and back to origin was complete.

We shared a homemade traditional Burmese meal together and I learned more about their lives, the community, and the farm. Mya Ze Di also cultivates oranges and green tea, both of which we sampled.

And during this week of traveling, we had the privilege of both cupping coffees and discovering exactly how the community improved the quality of these offerings. 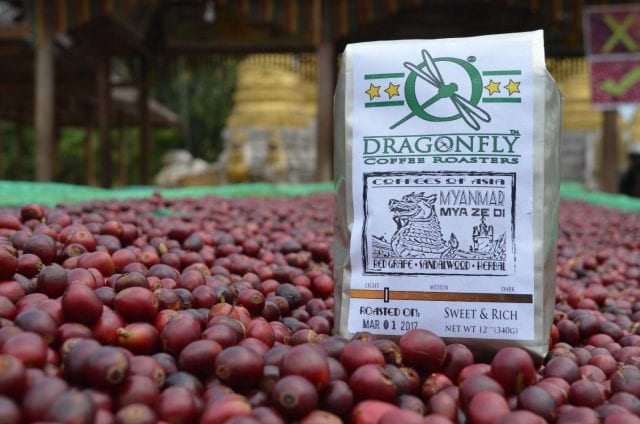 As we continued through the week, each tasting session yielded remarkable results. Across the seventy coffees evaluated, only two fell short of specialty criteria – a remarkable achievement.

These were exactly the coffee gems I had hoped to find: bright, sweet, sparkling and luscious. They were the perfect combination of a fruit-forward Ethiopian natural and a classic earth-and-spice-toned Sumatra, all in one. 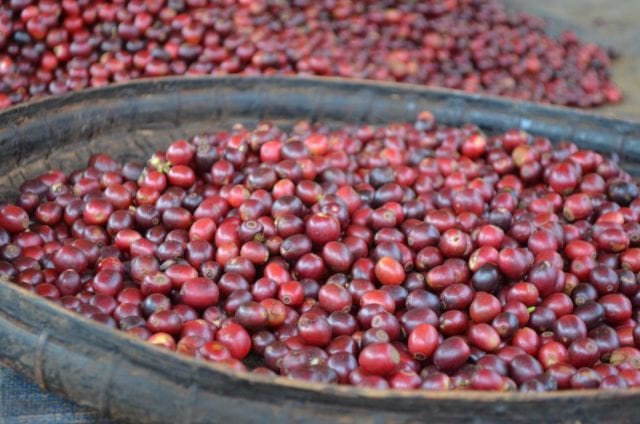 But the question remained: how did the quality improve so dramatically over such a short time?

The answer I found was simple. It was the drive and passion of the producing communities, guided by Winrock and CQI’s efforts through the USAID Value Chains program.

What really makes this inspiring is that each of these communities were given only basic assistance and training in quality control and procedures. Farmers took it upon themselves to innovate and improve the processes and procedures they were shown.

With support from the USAID project team, this led to a fifteen-point quality increase – and, in turn, an unprecedented level of demand erupted from foreign consumer markets. 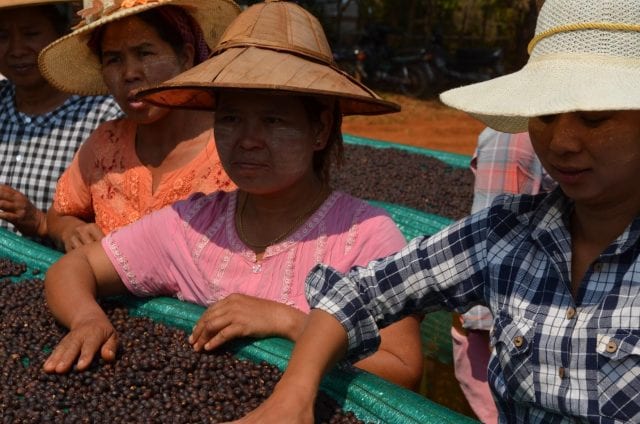 The faces behind the coffee. Miang, Myanmar, Credit: Tamas Christman

What Next For Myanmar’s Coffees?

Such rapid growth brings challenges. The road to success is paved with many roadblocks. For a start, the speed of improvement has outpaced the country’s frail infrastructure. It’s stretched credit lending in a new and relatively untested banking system to its limits.

Still the future is bright for coffee in Myanmar. The passion and dedication of the people of Myanmar seems able to surmount any obstacle. And I, for one, cannot wait to taste the coffees from their future harvests.