Harvest time in El Salvador is November to February/March. It’s a cool, dry season perfect for the picking of coffee cherries. Yet this year it’s already been marked by heavy rains.

While in El Salvador for the first PDG Micro Coffee Festival, we saw them strike suddenly and dramatically. Coffee flowers were opening on the trees even as pickers were harvesting cherries – something you might expect to see in Colombia, but not El Salvador. Carlos Pola of Finca Las Brisas told me, “It’s like snow in June. It never rains at this time of year.”

This isn’t just a freak weather phenomenon. This is a serious concern for many producers, who face decreased income this year and an irregular harvest next year. 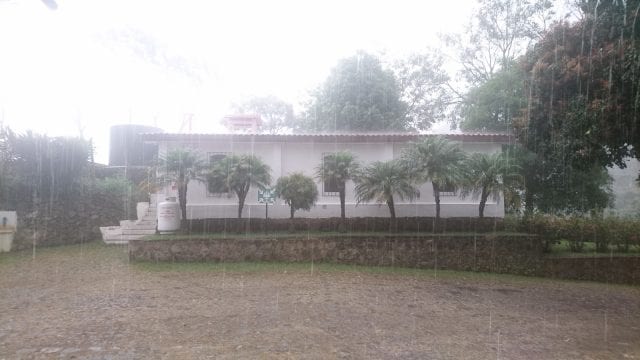 While rain is important for growing high yields of well-developed coffee, it poses a threat for ripe cherries. They may fall from the ground, where if left too long they will begin fermenting.

In other cases, the cherries may stay on the branch but start cracking. This happens when too much water is absorbed too quickly, and so the cells in ripe cherry peel are forced apart. It results in a lower weight and a lower cup score, as the sweet mucilage seeps out. “It loses all its honey,” Rafael Silva of SICAFE explained. 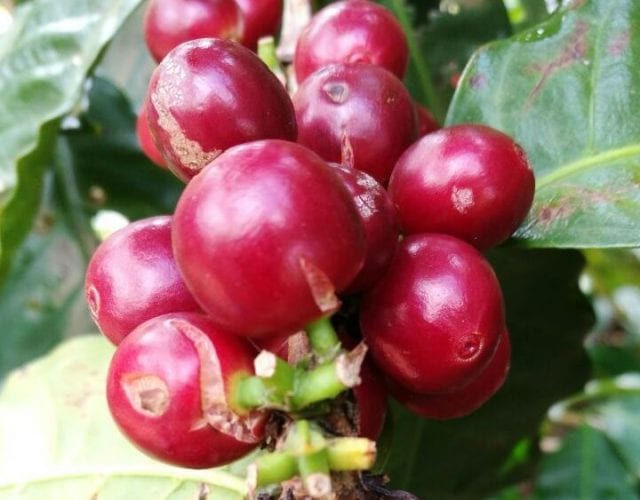 On a night visit to Cuatro M processing mill as part of the Micro Coffee Festival, we saw how coffee cherries are graded based on ripeness. The ideal lot has many ripe red cherries, few over-ripe ones, few pink ones, and no under-ripe ones. “Tomorrow, we’ll pick pink because of the rain,” Roberto, the General Manager, told me. “It’s a risk, waiting for the cherries to become ripe.” 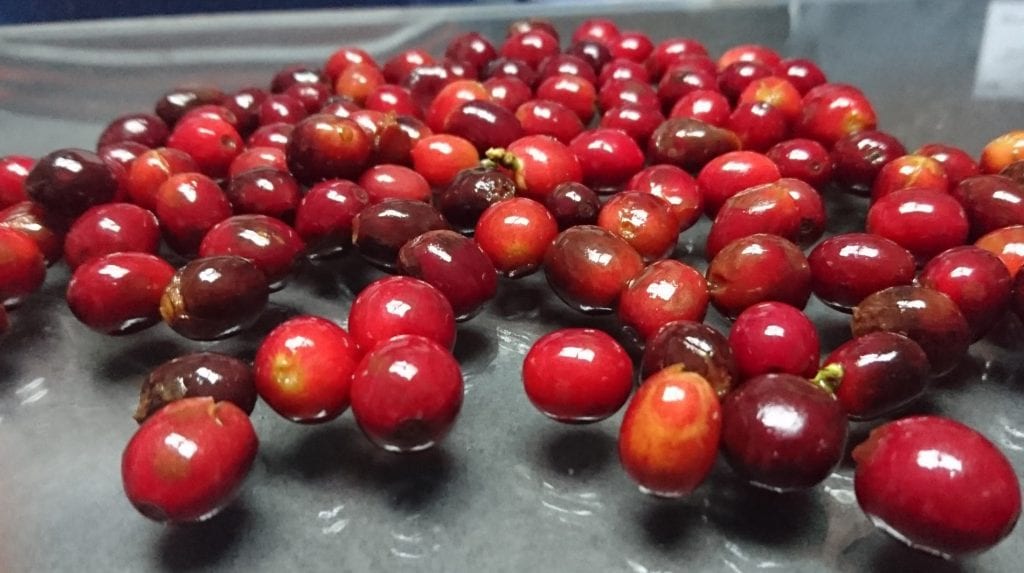 Issues at the Mill

Rain doesn’t just cause problems on the farm. It’s also an issue at the mill. Rafael explained that, for recently picked coffees, it’s okay if they get a little wet – but that for those that are nearly at the right moisture level to be bagged and exported, it can have a serious impact. “You need to dry them again,” he said. “It needs a second processing. That causes quality issues.”

Even if you only have freshly picked coffees drying on your patio, heavy rain can still cause problems. “You need to put wood between the lots, or they can mix,” Rafael told me. “Then you cover them. But when it comes down this fast… ” He gestures at the rain around us. “Then you don’t have time to do that.”

The sudden appearance of the rain is one of its most damaging aspects. Even those with coffee in GrainPro channels, designed to protect the beans from rain, stood to suffer: at Micro Coffee Festival, they didn’t have time to close the bags before significant amounts of water had already drenched them.

“This is the peak time for mills right now,” Rodrigo Silva of SICAFE said. “And so it’s the hardest time to deal with rain.” 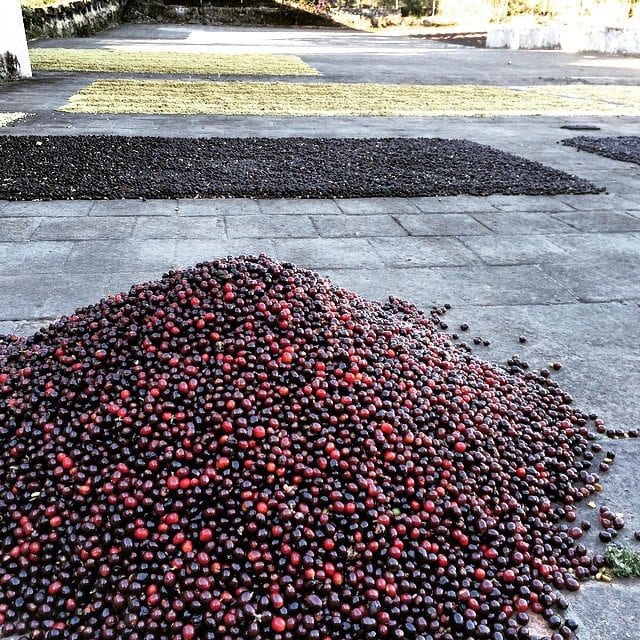 During harvest season, many lots are processed on the same patios or beds. Credit: Mapache Coffee

The Financial Impact on Coffee Producers

Those processing natural and honey coffees are the worst hit, along with smallholder farmers with less staff, resources, and financial breathing space.

Rafael and Rodrigo told me that rains like this can see cupping scores decrease by a few points or more. The market price for coffee is approx. $1.30-1.35/lb right now; specialty is $2.50-3.00/lb. Specialty coffee cups at 80 points or higher, but many roasters will only purchase single origins that are 84+. The difference between a 79 and an 82, or an 82 and an 85, is costly.

And smallholder farmers in particular may be left with no choice but to watch their coffee depreciate in quality. “We have to call our mills to have them separate and cover coffee,” Rafael told me. “And to move nearly ready cherries inside the greenhouse… Smaller farmers just have to pick up all their cherries the very next thing.” 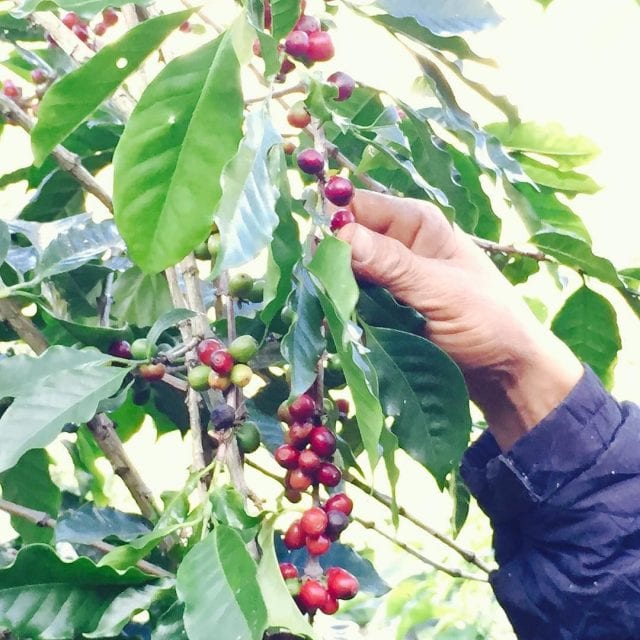 Issues Extending Into Next Year

“Next year, we’ll be harvesting in August.”

It’s a comment I heard multiple times during Micro Coffee Festival El Salvador. Heavy rains caused coffee flowers to appear on the branches early – but the appearance of flowers is linked to the development of cherries. While it varies, depending on varietal and location, typically Arabica cherries appear nine months after the appearance of the coffee flower. 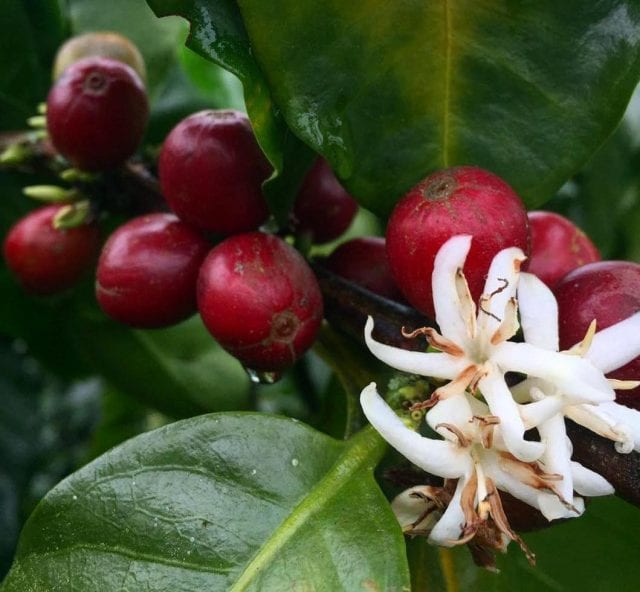 Coffee blossoms on the branch at the same time as ripe cherries in Colombia. Credit: Finca Atikvah

With the high probability of this year’s crop being both lower-quality and lower-yield, some low-income farmers might appreciate an earlier harvest next year. It may help stave off the “thin months”, that period before the harvest when money for food has run out.

But an early harvest will impact on supply and demand, as Salvadoran coffees compete with those that normally appear in August – such as Peruvians, Brazilians, and Kenyans. Less demand and more supply means lower prices, and so those thin months might last even longer.

Typically an early harvest could also lead to a shortage of pickers, as it is seasonal work. However, since coffee leaf rust (la roya) hit hard in 2012, affecting yield as well as quality, there has been a surplus of coffee pickers – one producer estimated there to be 25% more pickers than is needed.

Even this silver lining merely cloaks a nasty reality, however: if the harvest starts early, it will probably end early. Pickers who normally hope to work until February or even March may find themselves out of a job come December. And the gap between the 2017 and 2018 harvest will be wider, meaning the length of those thin months is likely to increase. 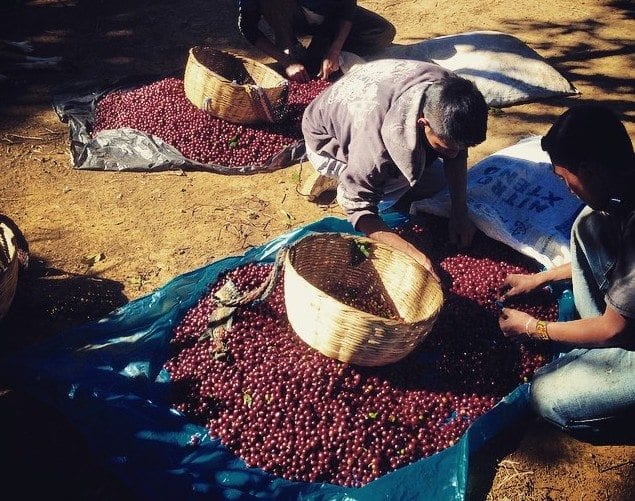 Rodrigo Silva of SICAFE told me, “Genuine buyers don’t get to see these problems. When they come to the farms, it’s not rainy season. And so they have no idea of the problems a simple rain can bring.”

Only twenty minutes earlier, Jesús Salazar of Cafeólogo discussed the reasons why some coffee producers may prefer to work with local “coyotes” than with specialty buyers. One of the reasons is that there’s less risk: if it rains, the coyote will still buy the coffee.

There is no easy answer to the problem of harvest rains. The specialty industry must continue to care about quality – but we cannot ignore the welfare of the producers and farm workers to do so. We need to ask ourselves what more we can do to provide income stability, not just when the weather is good, but also when rain, wind, or disease destroys crops.

Recommending income diversification, supporting producers in purchasing equipment to keep coffee dry, offering loans against future crops… and simply keeping in close contact ready to give advice. No method will solve the issue of harvest rains, but there are many ways we can attempt to support producers in the face of inconsistent weather conditions.