The Saudi specialty scene is new but growing fast, and if anyone knows that it’s Mohammed Alghamdi. In 2014, he experienced specialty coffee for the first time. In 2016, he became the first ever Saudi AeroPress Champion.

He agreed to tell us all about it Saudi coffee, from traditional dallah-brewed, cardamon-flavoured cups to the AeroPress. 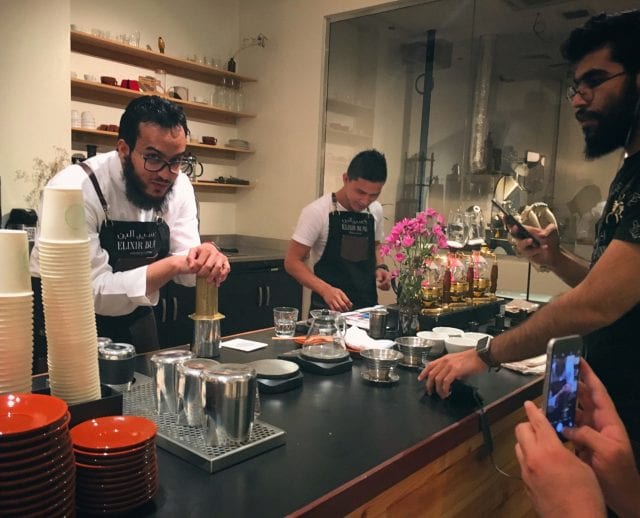 Hi Mohammed, thanks for chatting. Can you tell us about traditional Saudi coffee?

Our traditional coffee, also known as Arabic coffee, plays a major role in our culture. Guests and passers-by are typically served the golden-coloured drink; the coffee pot or dallah is commonly displayed like a masterpiece on the wall of the guest room; and more trivially, guests, after being served Arabic coffee, can choose not to drink the coffee in order to pressure the hosts into adhering to their request first.

Many poets have written about coffee and how it’s the core of their daily life. Drinking a good brew of Arabic coffee, from a dallah, flavoured with cardamom while socialising with good-spirited friends can be considered the epitome of a good time – at least, according to one fellow and his popular ‘80s poem. Don’t mind the rhyme; I’m giving translation a shot here:

How endearing is a cup of coffee with a mellow mind
in a place with none but the good spirited
This is a cousin on the father’s side, and that one is maternal
And this is a friend like no other

A dallah is an important part of the traditional Saudi coffee ritual. Credit: Khaled Alkolaib

Let me tell you about the ceremony.

Preparing coffee is traditionally a thorough process. It starts with roasting the beans in front of the guest, just like culinary chefs but minus the white hat, on a metal concave cookie sheet known as mehmas. Then you cool them down inside a wooden rectangular cubic-shaped tool.

Traditionally, Arabic coffee must be served left-handed. You pour it from its polished golden dallah into a cup near your right hand. From there, the guest is expected to pick it up with their right hand. They then drink it without sugar, but can complement it with sweet dates that are conveniently placed near their hand.

Here’s a piece of trivia for you: this is just like how Ethiopians present popcorn with their coffee. The Arabic cup shape and design is similar to the Ethiopian one, and probably inherited from them.

Specialty-grade Arabic coffees, roasted to the yellow tan to brown phase, can yield flavours like peanuts, almond, hints of caramel, and other bright notes. In this case, they can be brewed and served without the spices we usually add.

Can you tell how excited I get about coffee?

Absolutely! So can you tell us a bit more about Saudi specialty?

Specialty coffee enthusiasts, the real hardcore ones, used to gather in late 2012 to exchange knowledge on home roasting, brewing, and espresso extraction. This then developed into a chat group. And then some were able to develop this into startups.

The first couple of micro-roasteries in Riyadh started in 2014, and then a couple of roastery-cafés followed suit. Just a few enthusiasts and professionals had the burden of spreading an unpretentious coffee knowledge and awareness to connoisseurs and mainstream consumers alike.

A niche group of coffee drinkers started to see this new coffee wave, one that was foreign at first, and laborious, but sophisticated in its production. They saw the thin gooseneck kettle spouts, fancy scales, and light roasts and it made a bold impression of change on them.

While the third wave movement is just picking up in Saudi, we see more venture capitalists driving down that route as an early investment opportunity. They observe more people embracing the movement and upgrading their daily cup of coffee.

Nice! What types of coffee are popular?

Ethiopian Harar and Yemeni coffee are the most popular choices for Arabic coffee. Preferences tend to be for lighter roasts in the south of Saudi, and slightly darker moving north, from what I’ve witnessed. For filtered coffee, Colombia and Brazil are the most known and respected origins among the public.

Arabic coffee is consumed more than filtered/espresso, but the latter are experiencing a quick adoption as Saudi scholars of coffee come back to their country.

The coffee culture is not as new as it is to other continents. People are accustomed to searching for good coffee, and I believe that this made specialty coffee easy to adopt for people looking for unique tastes and a refined experience.

Within the past three years, the specialty coffee market has developed to a more advanced stage relative to that of our peers in developed coffee scenes.

This is also because consumers are open to something new. Over the past decade, there’s been a growth in the number of youthful locals looking for a change. 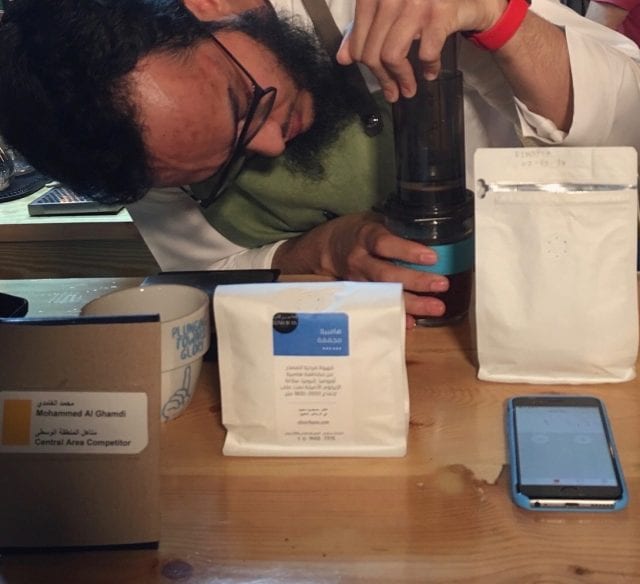 What challenges does specialty face?

I collaborate with Khaled and Ahmed from Elixir Bunn Coffee to get as many people to try progressive approaches to coffee roasting and brewing – whether at Elixir Bunn or and elsewhere. Incidentally, every local specialty coffee shop out there, I believe, has the mission to free coffee drinkers from the darkness of generic and commercial coffee – to bring more light to people’s lives, one roast at a time.

Ritz-Carlton Hotel in Riyadh is now adopting local specialty coffee at one of their lounges, thanks to The Roasting House which is led by our great friend Osamah Alawwam. Actually, they also recently launched and started exporting the first Arabic cold brew to London-based Rawligion cafe.

At Elixir Bunn Coffee, we’re also bring specialty to the restaurant experience. We’re teaming up with Menara to introduce a specialty coffee programme to their Moroccan-French cuisine.

Exciting. How do you see this developing in the future?

I believe that the name of Saudi Arabia will be heard more in the global coffee arena. I believe more coffee competitions will launch, and more cafés and roasting start-ups will both open and enrich our coffee and food scene.

Thanks for talking, Mohammed!