Extreme Coffee: How to Brew in The Great Outdoors

Hiking, sailing, mountaineering, camping… there’s no substitute for getting outdoors. And whether you’re a three-hour-walk-on-a-Sunday kind of person, or you’re more just-off-to-climb-Mt.-Everest-see-you-in-a-few-months, it’s always better with coffee.

Of course, it’s not as easy to brew on the go as it is as home. We spoke with extreme adventurers who have brewed while rowing across the Atlantic, at such a high altitude they need oxygen tanks, at -34℃, and more. Here are their tips. 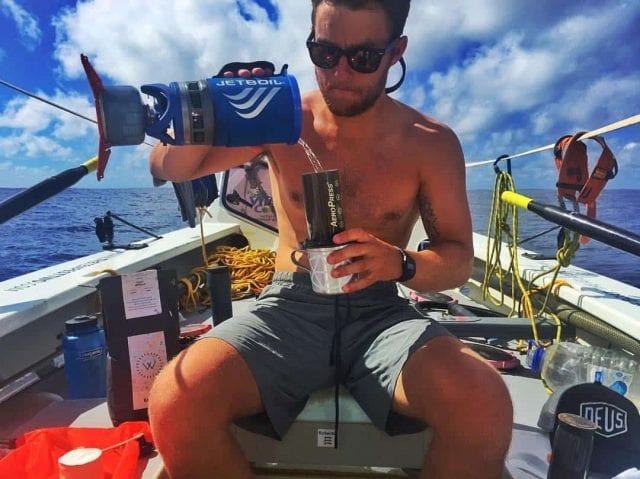 James Whittle makes an AeroPress while rowing across the Atlantic. Credit: The Tempest Two

James Whittle and Tom Caulfield, aka The Tempest Two, decided one day that they wanted to row across the Atlantic. Would the fact that they had never rowed or sailed before be an issue? Not for these two.

For the entire 54-day journey, they rowed two hours on, two hours off, twenty-four hours a day. And their daily diet was carefully controlled, with coffee a luxury item they could have once a day.

It wasn’t easy to brew on their boat, however. “We were filtering our seawater… putting it in the Jetboil and boiling it up,” James explains. “And while that was going on, we were hand-grinding the beans. And all the while we were getting thrown around from side to side. I think we had three or four spillages where we lost the whole coffee… we’d turned around to do something, but the boat moved and it’d end up on the floor. And so we’d have to wait to the next day for a coffee!”

An optimist, however, he adds, “Even when that happened, the smell of the coffee did a good job of perking us up. It was a really strong smell in comparison to just the salty sea air smell for the whole time.”

In fact, even when he recounts capsizing and losing two oars, sunscreen, and some bottled water, he remains positive. “It actually probably helped in the long run, because we knew what the boat was capable of.” Then he adds, grinning, “And the coffee stayed onboard – the important stuff made it!”

Since then they’ve also brewed coffee while kayaking in Sweden and climbing Mont Blanc in Geneva. 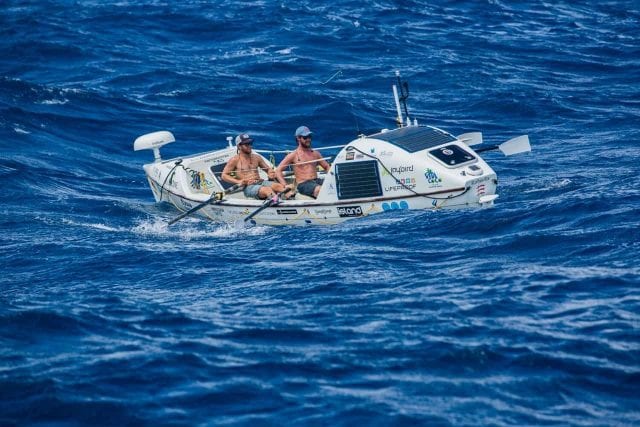 James Whittle and Tom Caulfield row across the Atlantic for 54 days. Credit: The Tempest Two

For James and Tom, the decision to take coffee on the trip – or subsequent adventures – was not made lightly. There were a few points they had to consider.

Brewing device: They opted for the AeroPress, with James telling me “it just made sense because it was plastic, not really breakable, and lightweight and you can just fit the hand-grinder inside it, and that really made the difference!”

Flavour profile: With extreme conditions and little room to pack sugary food items, James tells me that “natural sweetness” in the coffee makes a big difference. “As much sweetness in the coffee by itself, the better.”

Used coffee grounds: On their Atlantic row, they threw the biodegradable grounds over the side. But during later adventures in Sweden, they put them in sandwich bags so they could take them home.

Water source: “We were filtering our seawater, so there was still quite a lot of salt in the water,” James explains. “We had bottled water that we took with us and that we used when we were treating ourselves… but the other times, we would use the seawater so it had a kind of salty twang to it. Which is interesting. We actually got used to it!”

Heat source: “We had a Jetboil on the rowing boat, and in Sweden we had a thermos flask,” he tells me. Think ahead about where you’ll get your water from and how you’ll heat it.

So was it worth the effort? “If you enjoy your coffee, it’s not a hassle at all to take an AeroPress and a grinder,” James says. “And actually, having a good coffee in an amazing location makes the coffee like a hundred times better.” 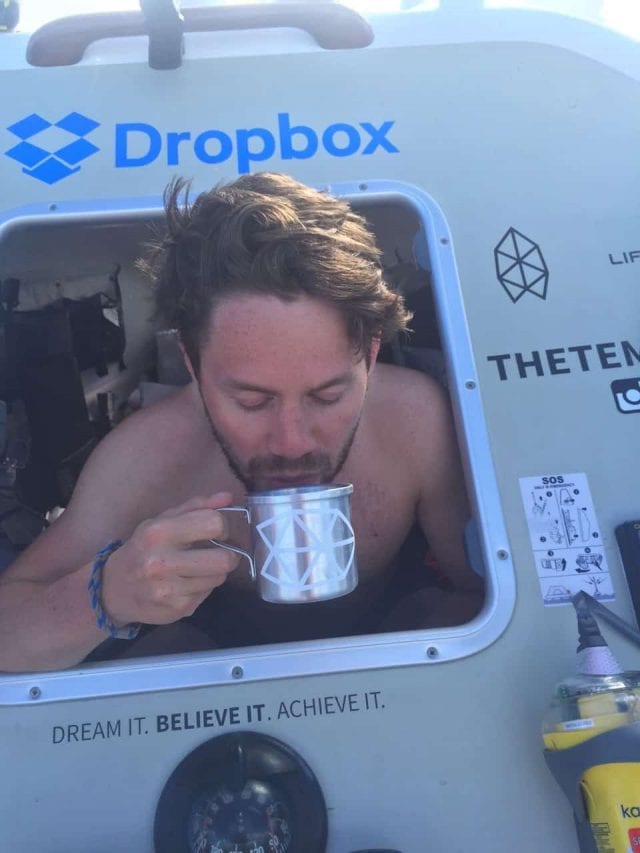 Tom Caulfield sips on a coffee while rowing across the Atlantic.

Canadian Luc Comeau wasn’t about to let some snow keep him from his coffee. As for -34℃ temperatures, pfft – what’s a bit of cold?

He tells us, “I always carry my AeroPress and burr grinder with me, both for outdoor adventures and business travels… Temperature doesn’t affect my decision to go out, but being well-prepared is key in extreme temperatures.”

He explains that the AeroPress is his go-to outdoors brewing device because “not only is it light but, when using controlled measurements for the coffee weight and water temperature, you can achieve a barista-level coffee.” And he’s not the only one who loves it – so do the local coyotes!

“I was out stalking coyotes and, after I put out the fire and left the area, I then dumped the used coffee grind on a frozen pond and hid about 40 feet away. 30 minutes later, the coffee was just a frozen blog. Three coyotes came by, sniffed it, and started licking it like a popsicle. Glad they enjoyed the AeroPress as well!”

Good coffee – it truly is appreciated by everybody.

Luc advised me to pay attention to two things: humidity and water treatment.

Humidity: “Getting a humidity dampener for the beans [in cold weather] is good,” he says, “and in extreme temperatures I usually stick to non-metallic containers. The origami plastic cup is better than a metal one for not preventing the container from transferring cold into the coffee. That being said, I recently started using Yeti cups. They’re metal but if you keep one inside your jacket to warm it up, then pour the coffee in it, with a lid it should keep your drink hot for at least 20 minutes at -30℃.”

Water treatment: Luc tells me, “I use an MSR Miox for treating my water while hiking since it’s light and very effective. But I’ve learned that, while you can drink water treated from that or other devices like UltraViolet light purifiers, the taste of the water is too variable and, most of the time, awful for making coffee. Hence, when I go for long trips, I’ll also carry a water filter pump. That will get my water as neutral as possible.”

Nidas Kiuberis of Coffee Inn, Vytautas Samarinas, and Grazvydas Vilčinskas of Kavos Bankas decided they wanted to make history – by brewing coffee at an altitude of 20,000’ (6,096 m).

It required a hot air balloon, an AeroPress, and some serious protection against the cold. We’re talking not just professional ski suits but also oxygen delivery devices. At that height, a hot air balloon travels at 60 km/h (37 mph) and a temperature of -20/25℃ – which means the human body needs to rapidly adjust to very different conditions.

They roasted the coffee just before the flight on a portable roaster; Nidas tells me “I know, it’s too fresh, but…”, and you get the idea that these three adventurers wanted to do it all by hand.

So what’s it like to drink coffee in a hot air balloon? “A simply stunning experience!” Nidas says. “It was 5 am in the morning, so we’d prepared the balloon before the actual sunrise, almost in the dark. And it was such an amazing experience. We rose in complete silence, above the clouds and sleeping city of Vilnius, to watch the sunrise with a cup of coffee, freshly made on-site!”

Despite concerns about how the low boiling point might affect the water in the flask, Nidas assures me that it was “a very good cup of coffee! Although that may be because of the shortage of oxygen!” 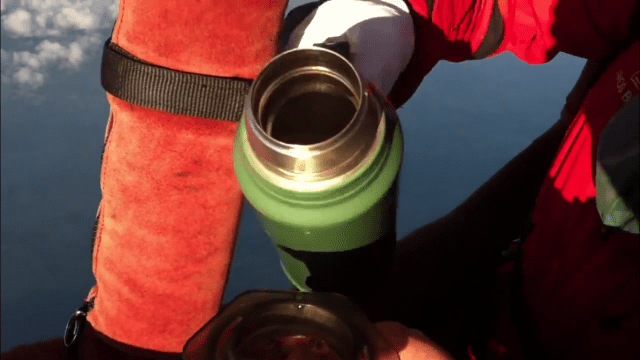 This wasn’t a brew they could perfect over time, so Nidas was careful to have the right equipment.

Hot water: “Invest in a good thermos to keep the water hot for hours,” he says. “That’s if you can’t heat it up where you are. I also use a Hario Uchi mug – it keeps coffee safe when on the go.”

Coffee grounds: Nidas doesn’t just throw the used grounds away. He tells me, “They work well when you need to scrub some dirt from used dishes after camping, or clean your hands of oils or fats.”

Jake Budler took his coffee kit with him to wildlife nature reserves in Botswana. It was part of a much longer journey, and he and his friends had difficulty finding accommodation and transport – leaving them no choice but to camp right next to the reserve one night, separated from the animals only by “an old fence”.

It was nerve-wracking, but also exciting: “After setting down our stuff, what we first did was brew a cup of coffee. And that was the moment that we cherished how much that cup of coffee meant for us. It wasn’t just a regular coffee while camping, it was a coffee brewed where no one had imagined brewing a cup.” 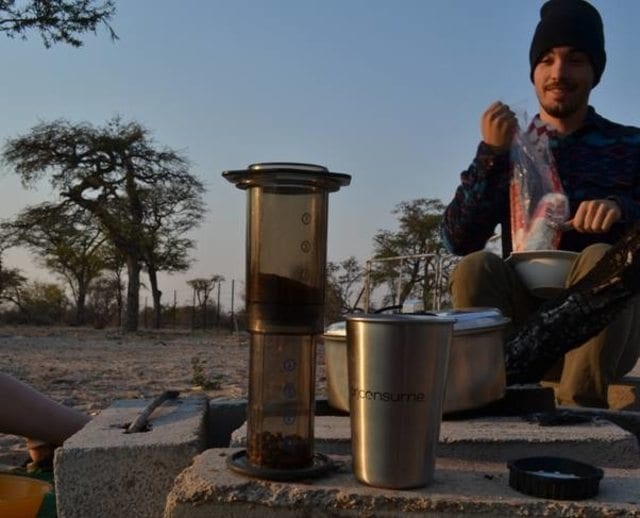 Jake tell us that the biggest mistake most people can make when brewing outdoors is to forget the basics.

Equipment: “Remember that in the adventure of going to really remote places commodity for utilities are not an easy reach. One thing I keep an eye on is a cup. Sometimes when you think about everything else you forget the essentials.”

Water temperature: “Heating water may be a difficult task… if you can’t build a fire or have something to heat your water outdoors. You could boil your water and put it in a flask if you’re planning short outdoor trips. The water will stay warm, although it won’t be a controlled temperature.” 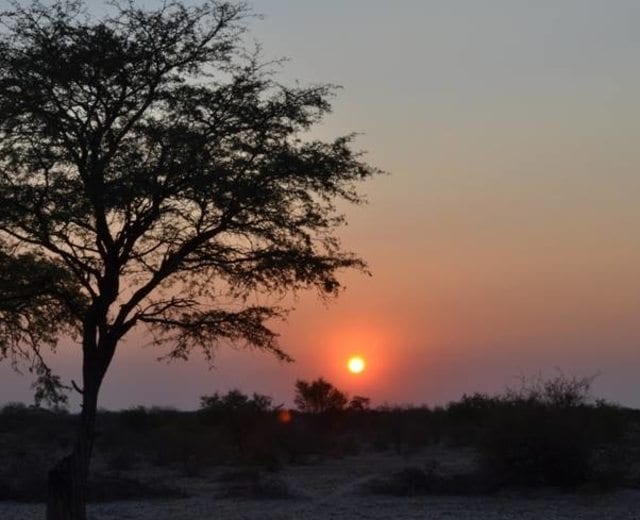 If these adventurers have taught us anything, it’s that there’s no excuse to not brew coffee when outdoors. And as Autumn hits in the northern hemisphere, what better way to warm up your hands when looking out at an amazing view?