From Sports Toys to World AeroPress Championships: An Interview With Aerobie, Inc.

The AeroPress might just be one of the most famous brewing devices around. After all, it has an entire World Championship dedicated just to it. On top of that, it’s portable, easy to use, and brews a great cup. Yet the company behind it had previously only designed sports toys.

We spoke to Alan Adler of Aerobie, Inc., inventor of Aerobie sports toys and the AeroPress coffee maker, to discover more about its creation, what it meant for coffee, and why it’s still going strong 11 years on. 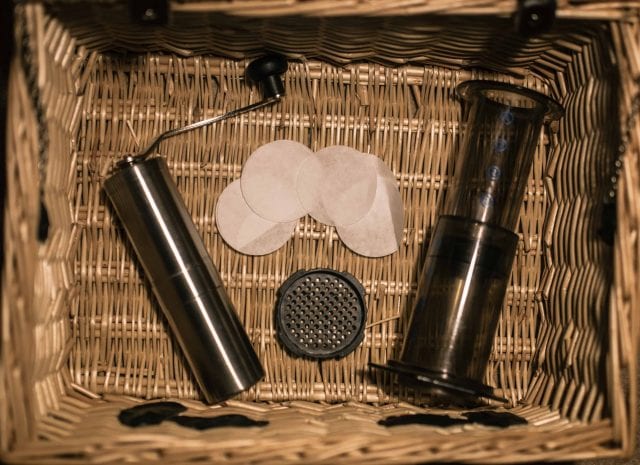 The AeroPress: all you need for a great brew. Credit: Joel Smedley

Hi Alan, thanks for chatting to us. So why did coffee need the AeroPress?

The AeroPress meets a need for an inexpensive, simple way to make one or a few servings of deliciously rich coffee quickly with minimal bitterness. Prior to the AeroPress, the best way was with a pour over. Because it uses pressure and finely ground coffee, the AeroPress delivers lower bitterness and also enables the user to make an espresso-strength brew for use in lattes, etc. It’s also easy to use and simple to clean. People don’t need advanced brewing skills to brew a great cup with it.

And how did the idea of the AeroPress emerge?

I was disappointed with the taste of coffee I was brewing at home so I decided to study the coffee brewing process variables and how they affect taste. I learned that you need to minimize wet time to minimize bitterness, which led me to the conclusion that I needed to utilize pressure to shorten the wet time. That required a closed chamber.

It took me two years of researching the brewing process and testing out prototypes (more than 30 in total) but at last I found a design that worked the way I wanted it to. 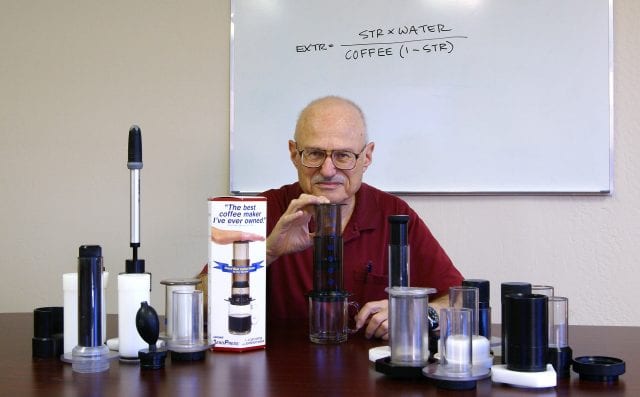 You were clearly dedicated to the idea. Airplay seems to be constant aspect in the company; how important is aerodynamics for Aerobie?

Aerobie sport toys are famous for their performance and, in most cases, that performance involves aerodynamics. The performance of our original product, the Aerobie flying ring, was so extraordinary that it set a Guinness World Record for the farthest throw. The breakthrough was the ridge around the perimeter of the ring which enables straight and accurate flights. It’s why Erin Hemmings was able to throw the ring over a quarter of a mile and set the record. That same aerodynamic design is responsible for the remarkable flying performance of many of the other Aerobie sport toys.

Aerodynamics isn’t important to the AeroPress, but aerostatics is. When you press, the air pressure permits short wet times and results in a delicious cup of rich-tasting coffee with minimal bitterness. 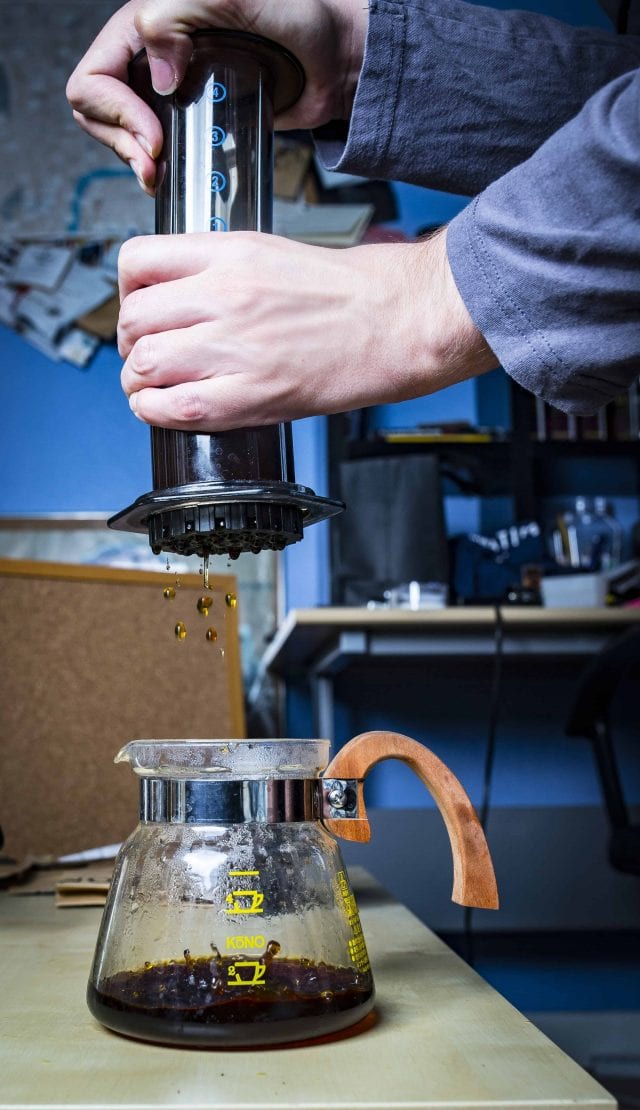 I see. So it’s all about aerostatics, not aerodynamics. Was it hard to convince your investors and team members that expanding from toys into brewing devices was a good idea?

No, we were excited about the AeroPress coffee maker. We were, however, mindful of the fact that a lot of work was ahead because it required establishing completely new channels of distribution.

I can imagine! And was it a struggle to adapt your marketing techniques for the AeroPress?

I wouldn’t call it a struggle, but it was a major undertaking. There was a common thread: both our sport toys and our coffee maker sell because of their exceptional performance and I would say we excel at spreading the word about superior performance that delivers real value to consumers.

When you first went to a coffee event, was it surreal? Was it difficult to get people to respect you as a brewing device developer and manufacturer?

Yes, at first some people in coffee – and certainly many retailers – didn’t take us seriously. We were a toy company selling a new kind of coffee press. We were also using shorter brew times and lower temperature water, both ideas that were counter to conventional wisdom.

Our demonstrations at some early trade shows were critical because they gave us the opportunity to get people to taste AeroPress-brewed coffee. Early on, we converted one person at a time by getting them to taste the coffee we brewed. People were amazed that such a simple and inexpensive device could brew such a great cup. 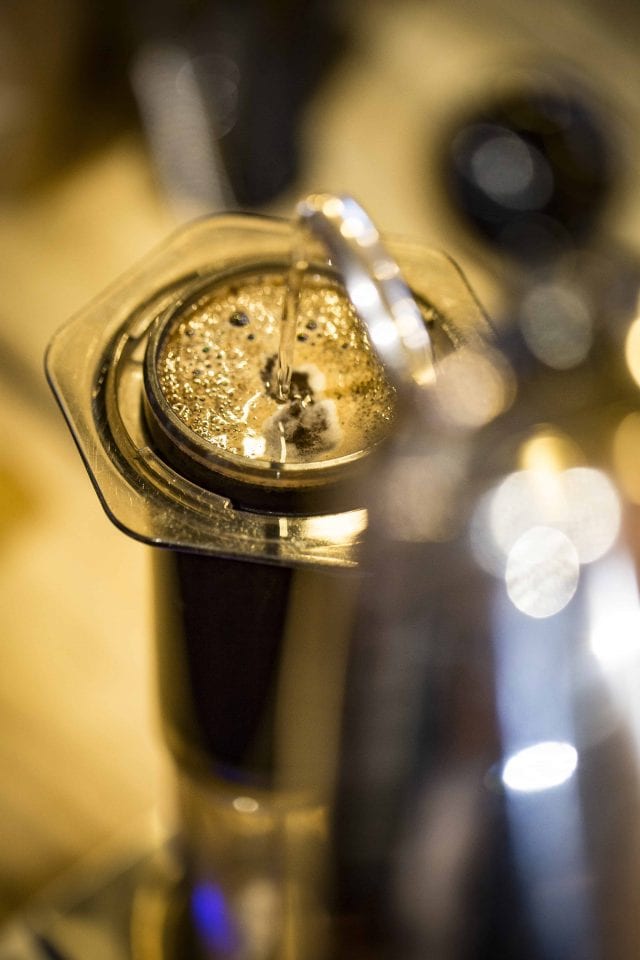 I bet! I’ve heard the quote “An odd-looking coffee maker… that’s made from a sports toy company” before. But the coffee world is certainly used to you now. What about for Aerobie – what was it like, as a team, transitioning to the coffee world?

It wasn’t exactly a transition but rather an addition. Sport toys remain an important part of our business. That said, it took a lot of research into the coffee world to prepare us for that expansion and we continue to learn every day.

The introduction of the AeroPress was greatly helped by the reputation of our sport toys. We’ve heard many people, when they learned that we had invented a coffee maker, exclaim that they absolutely had to get one because they love our sport toys so much. Many of them have become fans.

In that way, each side of the business supports the other. AeroPress has doubled our size, in fact. People all over the world have gotten to know Aerobie: our toys are sold in over 40 countries and the AeroPress is sold in over 60.

Also, you might be surprised by how much market crossover there is between the AeroPress and our sports toys. The AeroPress is compact, lightweight, and durable, making it a great option for brewing while camping, boating, fishing, and hunting – so we sell both our sport toys and our coffee maker to outdoor retailers.

So between the discs, the toys, and the AeroPress, what’s the defining purpose of Aerobie? Does any one product or idea tie this company together?

Perhaps exceptional performance. We always strive to make unique, innovative products that perform above expectations. Our flying toys are famous for their world record flying performance. Our coffee maker is famous for the delicious coffee it brews. Our mission is to make every consumer that buys an Aerobie brand product a missionary for our brand. 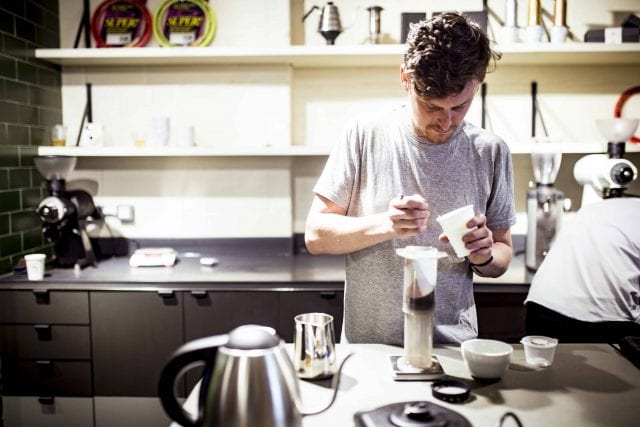 The AeroPress is one of the easiest brewing methods around. Credit: Joel Smedley

You said before that Aerobie has doubled in size thanks to the AeroPress. What have you done to keep yourselves a family business for over 30 years? And what are you still doing to achieve that?

Two of my grandchildren have joined Aerobie full time. Constance and Scott started out years ago, working on sales and admin tasks during school breaks. Scott now helps out in operations and research and development while Constance works on the website and publicity. It’s quite a step up from their first “jobs” at Aerobie – helping me test out sport toy prototypes when they were kids!

That must be a great feeling, knowing that your family are working with you. Who else makes up Aerobie and how big is your company?

We have about a dozen company employees, eight of whom have been with us for over ten years, but that really understates our size. Like many companies (such as Apple), we subcontract manufacturing. We use a factory here in California where over a hundred jobs are generated manufacturing our products. Our activities also create many jobs at the warehouse in San Carlos, California that ships our products, and for independent manufacturer’s representatives all over the country that sell our products, all of whom aren’t company employees.

We’ve looked at the past and the present of Aerobie; let’s talk a bit about the future. The AeroPress was invented 11 years ago, so we can safely say it’s stood the test of time. But do you think its position in the market has changed? And is it still as revolutionary as it was then? Will it ever need updating?

There have been no major changes in the basic design, but we have made many improvements over time. Our goal has always been to manufacture the AeroPress using the best materials we can find so we’ve changed materials and color tints a couple of times.

Okay, one last question! Since we’re talking a little bit about coffee, I’ve got to ask: what coffee do people like to drink at Aerobie?

I tend to favor Guatemalan coffees. In terms of the brewing recipe, most people here drink Americanos brewed with a single heaping scoop of medium roast and water filled to number two. Then they top off the mug with additional water. At any given time we have coffee samples from various roasters worldwide in the cupboard, so there’s always something interesting brewing in our office AeroPress.

I see. And thanks for talking to us, Alan!

Aerobie, Inc. is a sponsor of Perfect Daily Grind. This interview was conducted in accordance with our editorial policies, and Aerobie, Inc. has had no greater influence on the final copy than any of our other interviewees.