In Puerto Rico, we’ve been tirelessly cultivating coffee for 280 years. Through its highs and its lows, the production of this bean has heavily marked our history and our cultural identity.

So why does our coffee lack recognition on the international market? How is today’s coffee culture different from that of 1736? And how are we innovating to produce even sweeter, and even more sustainable, specialty coffee for the future? Read on to find out.

SEE ALSO: Interview: How Specialty Coffee in Honduras Rocketed to the Top

Puerto Rico is a nation that combines hard labor and shameless enjoyment.

Situated in a corner of the Caribbean with 3.9 million residents, you’ll find we have bright coastlines, emerald mountains, and the famous piña coladas. We happen to be a cheerful country with ever-dancing feet – and we’re as proud of that as we are of our native coffee. We won’t think twice before shouting “Yo soy Boricua, pa que tu lo sepas!” (For the uninitiated, this is our anthem: “I’m Puerto Rican, just so you know!”)

Yet there is also another side to us. As in any coffee-producing country, the industry has been dramatically fluctuating for years. Nearly 22,000 people grow, process, roast, sell, and serve coffee on the island, and those people are feeling the need for a more sustainable source of income.

More than just working the land and believing that our coffee is the greatest, Puerto Rico needs to be working towards an agreement on what we can do to actually improve production and earn notice in the world coffee market once again. This will demand great effort and innovation from producers, but we can and must achieve it.

And we’ve already started working on it…

Before we look at the future of coffee in Puerto Rico, we need to understand the uncertainty plaguing it now – and that requires a short explanation of our history.

Coffee was first introduced in 1736, when we were a Spanish colony. At first, the industry thrived. By the beginning of the 1800s, civil wars in coffee producing countries had caused an increase in the price of the commodity worldwide. This paved the way for a surge in production. In combination with the arrival of new technologies and European immigrants, who both acquired and worked the land, we became the fourth-largest coffee producer in the Americas. The nineteenth century was a golden era of coffee for us.

Yet our halcyon days saw a dramatic end. In 1899, a hurricane hit our island and devastated most of the crops. We were left unable to rebuild our coffee haciendas (estates).

As we entered the 20th century, we became U.S. territory, which had a mixed effect on our coffee industry. It helped to develop it once again, but it also inflated the cost of production, making it difficult for us to compete in a market dominated by Brazilian and Hawaiian beans. Then, as people moved to the States in search of better opportunities, or were drafted into the military, we saw a shortage of workers.

By 1950, Puerto Rico found itself in the precarious situation of consuming more coffee than it was able to produce. Once a strong producing country, we had to begin importing coffee to be blended with local beans. 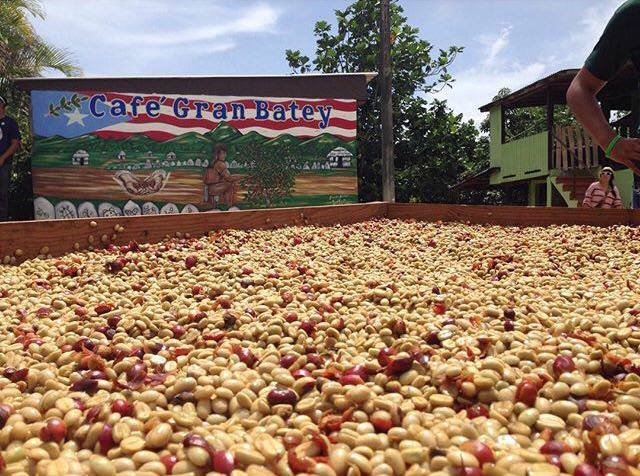 Today, we struggle to produce 28% of our domestic coffee consumption. Yes, over two-thirds of the coffee we consume is imported.

Yet despite the fact that this is a nation that imports 85% of its food and has a 14% unemployment rate, it’s also difficult to find hands to actually work the fields. In fact, some haciendas have been forced to reach out to volunteers curious about the industry so as to fill the gap.

And even though very few coffee farms actually attempt to export their coffee to markets like Japan and Europe, we struggle there too. We must abide by U.S. exporting tariffs and federal minimum wage (practically making us fair trade) which, among other things, causes the price of our products to exceed, almost threefold, that of comparable coffees from other countries.

If you think the situation sounds dire, you’re not wrong. Yet there may be a way forward for us: improving our coffee quality and international coffee presence. 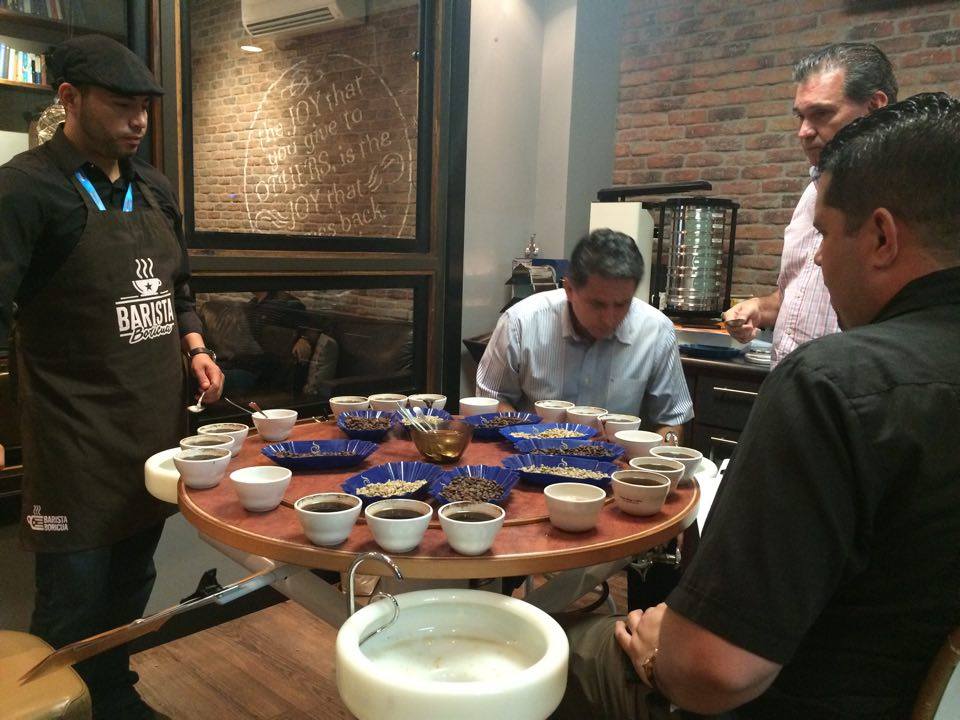 Even though the industry still faces uncertainty, there’s been an encouraging recent bloom in the industry. We’ve seen a high-paced growth in the number of new coffee shops and cafés opening up around the island. This has created the space for experienced and aspiring baristas to sharpen their skills and improve the quality standard of the coffee served.

Additionally, the coffee-drinking community is educating themselves, with a pretty decent number of home baristas demanding a superior tasting cup.

And, as a way to build the community and offer support to our champions, last year The Puerto Rican Barista Team was created. They hope to unite baristas, shop owners, roasters, and aficionados by creating a platform that focuses on moving the coffee industry forward.

We’re also increasing our presence in the international specialty community. Since 2003, we’ve participated in the World Coffee Championships. We will be present again in 2016, with Daniel Rivera competing in the WBC and Arnaldo Hernandez in the World Latte Art Championship. 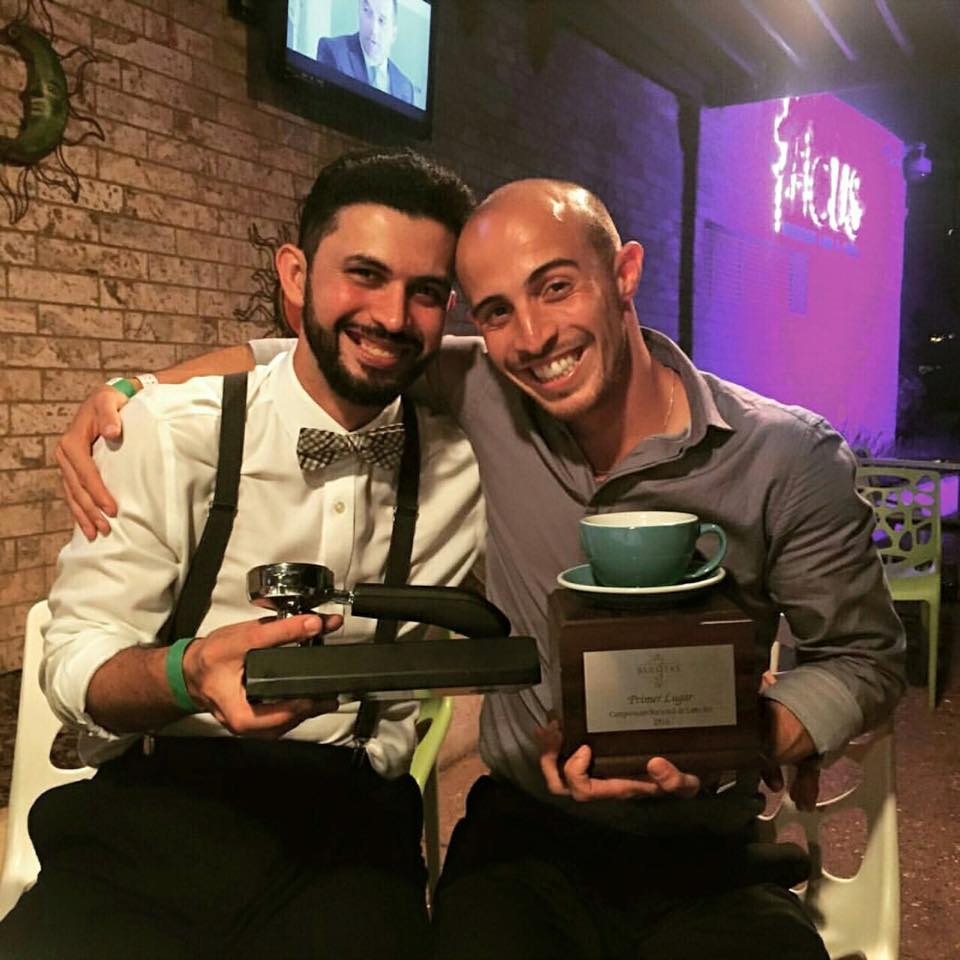 Daniel Rivera and Arnaldo Hernandez: Keep an eye out for these two in Dublin and Shanghai. Credit: Rebecca Atienza

On the other side of the cup, we’re also working on improving and promoting our coffee. The University of Puerto Rico in Mayagüez and its Agricultural Research Station have proposed a program for local specialty coffee to be cupped and labeled as Puerto Rican single origins.

Additionally, in collaboration with the Department of Agriculture, La Taza de Oro was established in 2014. This is a competition similar to Cup of Excellence and Project Origin; it seeks to reward the coffee-growing farm with the best practices and products on the island. The first winner was farmer Waldemar Brebán from Hacienda Zahara, who is now in the process of establishing his own coffee brand.

And in our attempt to cultivate even better coffees, we’ve also been working on several innovative projects – such as picking coffee in the dark.

Picking Coffee at Night: The Key to Better Quality?

What if picking coffee at night, when the plant is more relaxed, results in a higher sugar content?

The beauty of this idea is that it has the potential to increase the quality of the bean without a considerable change in the cost of production.

It arose from a casual conversation between Roberto Atienza, farmer and owner of Hacienda San Pedro, and Angelo Segoni, barista and coffee consultant visiting from Italy. Atienza and Segoni then reached out to Jeffrey Caraballo, agronomist from the University of Puerto Rico and PhD candidate in Tropical Plant and Soil Sciences of the University of Hawaii in Manoa, to test it.

Simultaneously, there was a call to unify Puerto Rican baristas and bring them deeper into the coffee plantation. In this way, the coffee community would be strengthened and, to a certain extent, perhaps that shortage of coffee workers might be alleviated. 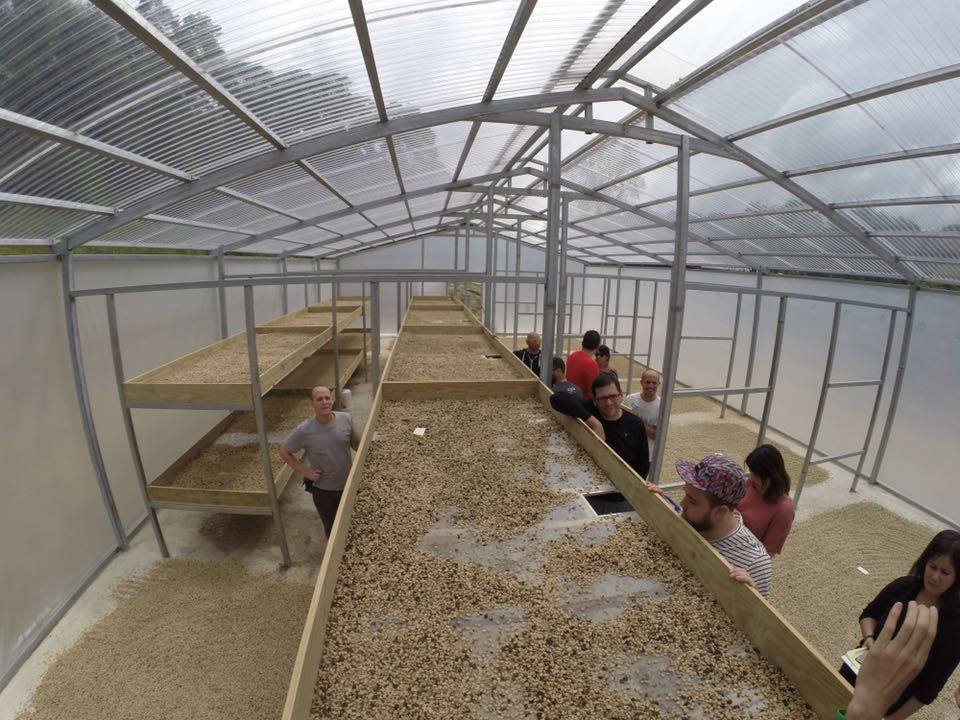 A greenhouse in the tropics feels a little bit like a sauna for this group of baristas. Credit: Emmanuel Gonzalez

Kathy Muir of Gustos Coffee and Rebecca Atienza of Hacienda San Pedro Coffee Shop organized the first Night Coffee Picking in 2014. It was a moment of barista comradery, with friendly competition over who could fill an almud (just under 28 pounds) the quickest; anyone caught picking unripe berries was sure to be bullied.

In the end, we picked seven quintals. After processing, this yielded around 87 pounds of coffee. It wasn’t a tremendous amount, but it was a start.

For the second occasion, on November 7th 2015, a group of around 50 baristas and coffee aficionados gathered on Hacienda San Pedro in Jayuya just as the night grew darker. With only the light of headset flashlights and cell phones, the volunteers wandered into the coffee plantation under the guidance of Atienza and Segoni. The instructions were simple: pick only the ripest berries. 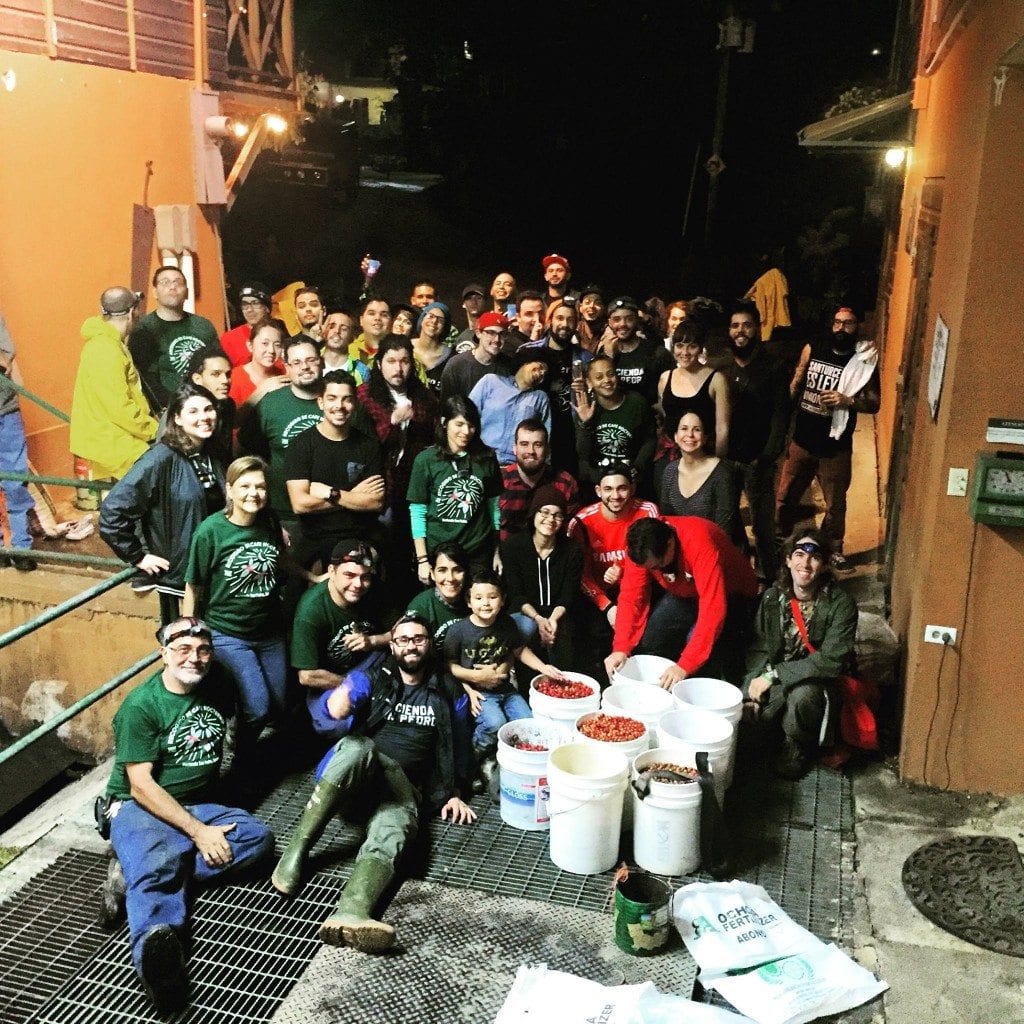 The drive up to Jayuya at night is no easy task. Props and thanks to all who made it. Credit: Rebecca Atienza

Ideally, a coffee tree needs a short period of dryness, but in 2015 the island experienced a severe drought lasting six months, delaying the maturing of the coffee berry. This meant a keen eye was necessary to avoid picking berries that had yet to be fully developed – especially given the lack of light. 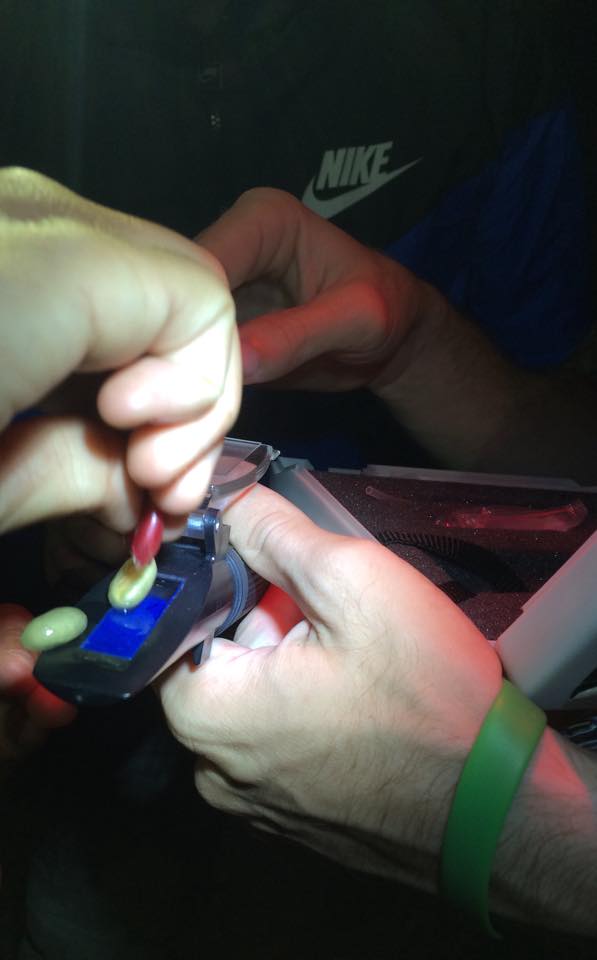 A refractometer, a tool that reflects the light projected into a sample to show the sugar in the mucilage.

In the end, we managed to pick close to 200 pounds, which was set aside to be dried naturally for twenty days. Although a small quantity, the quality was excellent.

While the results of the study are still ripening, the outcome seems to be assuring. Picking coffee at night certainly has its difficulties, primary of which is visibility. On the other hand, it provides a break from the heat of the day – and possibly a better-tasting coffee.

The question is, will picking coffee at night be viable? And will it boost the ever-wavering coffee industry in Puerto Rico? It remains to be seen. 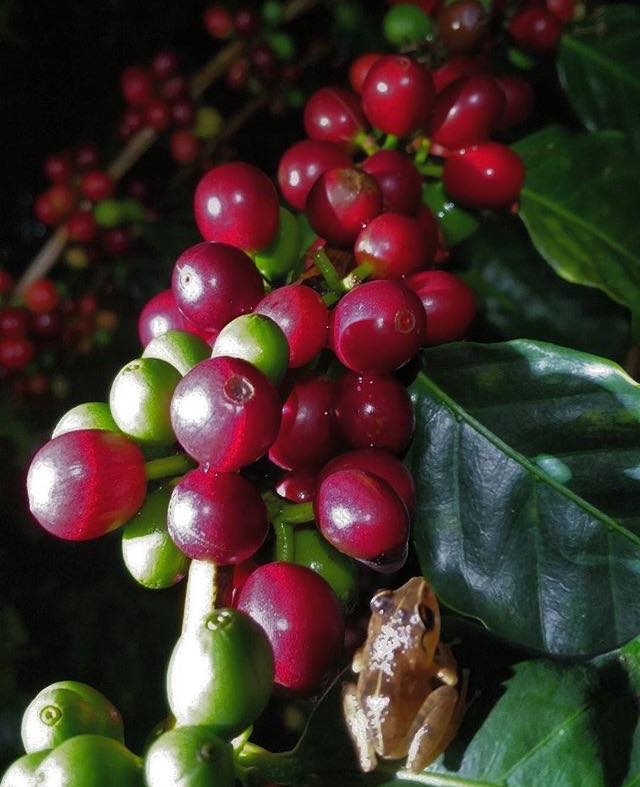 A coqui resting on a shrub of coffee berries. Credit: Karla M. Ortega

The Future of Coffee in Puerto Rico

As a barista myself, I’ve had the opportunity to proudly serve our coffee to people from all corners of the world. It’s always a pleasure to see them blurt out: “I didn’t know I could find such great coffee in Puerto Rico!”

Although the industry is not an easy or glamorous one, I’ve found great passion in the eyes of Puerto Ricans. Whether it’s about soil and shade, roasting profiles, or serving and drinking a great cup, we’re reaching for a higher quality of coffee. We’ve been bitingly dubbed the “crisis island”, but we can find solace in our generation’s awakening interest in agriculture. I know we have the conviction to uplift production and position ourselves in the international coffee market once again.