Café de L’Ambre: Where Green Beans Have Been Aged for 23 Years

On hearing that I was touring Japan, my friend told me of a café that, he said, would change everything I know and believe about coffee.

Bold words indeed. Thinking back, I remember my sceptical nod and smile. Yet that statement turned out to be true.

Café de l’Ambre goes against everything that I have learnt, known, believed, and felt about coffee and the café business. And it does so in the most beautiful, awe-inspiring and thought-provoking manner. To say that this place was life-changing is by no means an exaggeration.

The Café That Leapt Through Time

Nestled in a barren alleyway in the heart of glitzy Ginza, Café de l’Ambre was not easy to find. It almost felt like I was looking for the doorway to Narnia. Yet eventually I found it – and when I did, I noticed a sign that quite prominently said “COFFEE ONLY”.

I was torn: as someone who operates a café as a business, I often feel like my own ideas and beliefs are compromised by what my customers want. The rather harsh truth is that the market dictates the perimeters of my job.

“A café that doesn’t serve cake, or avocado toast, or eggs benedict is committing business suicide”: this was what I (and probably every other person running a café) believed in. Supplying growing demands is, after all, economics 101.

Yet here stood this café that didn’t have anything else but coffee. Not even lattes. All Café de l’Ambre sells is hand-drip coffee.

My inner businessperson felt aggravation, but my inner artisan silently cheered with pride.

So at this point, I envisioned an elaborate brew bar set up. There would be six Chemexes perched over Acaia scales in matching colours, and a cold drip machine decked out like it was made for Kanye West or someone.

All that appeared before me was a simple curved wooden bar, jars full of coffee, and tiny antiques scattered across the back-bar. 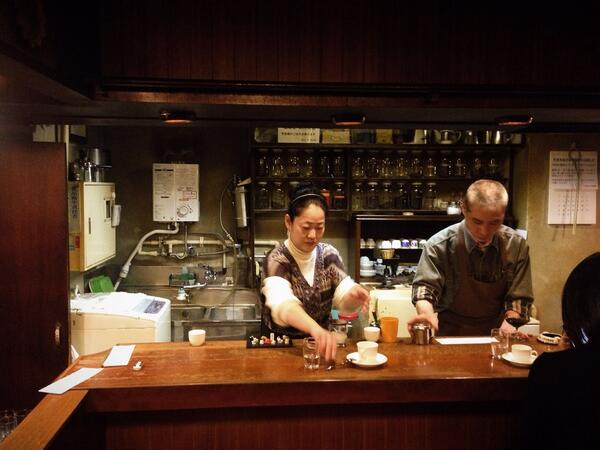 The equipment was impressive, but for very different reasons to what I’d expected: everything looked like it was made in the industrial revolution. The grinder was the size of a TV, and it was from 1948. The fridge was so old that it didn’t even run on electricity; giant blocks of ice were kept inside it to keep its contents cold. Nothing was made of pyrex, or chrome, or even organic bamboo.

If it isn’t broken, why fix it? Credit: Christine Seah

When Uchida-san came to serve me, I asked for his recommendation. He suggested the house blend, a seven-year-old coffee. Yes, you read that right – their house blend is a coffee that had been aged for seven years.

As a barista, I’d been taught to chuck out anything older than 21 days. I couldn’t even begin to fathom how a coffee that was as old as a grade schooler could possibly taste good.

But then, I took a closer look at their menu. They have green coffee that has been aged 10, 12, 21 and 23 years. I’m hyperventilating, this is so ridiculous.

And here’s where it gets even whackier: I ask about the roast level of their beans, and he hands me a small plastic jar full of them. They’re dark. Like really, really dark. I mean, I’ve had thoughts at 3 am that weren’t as dark as these beans. 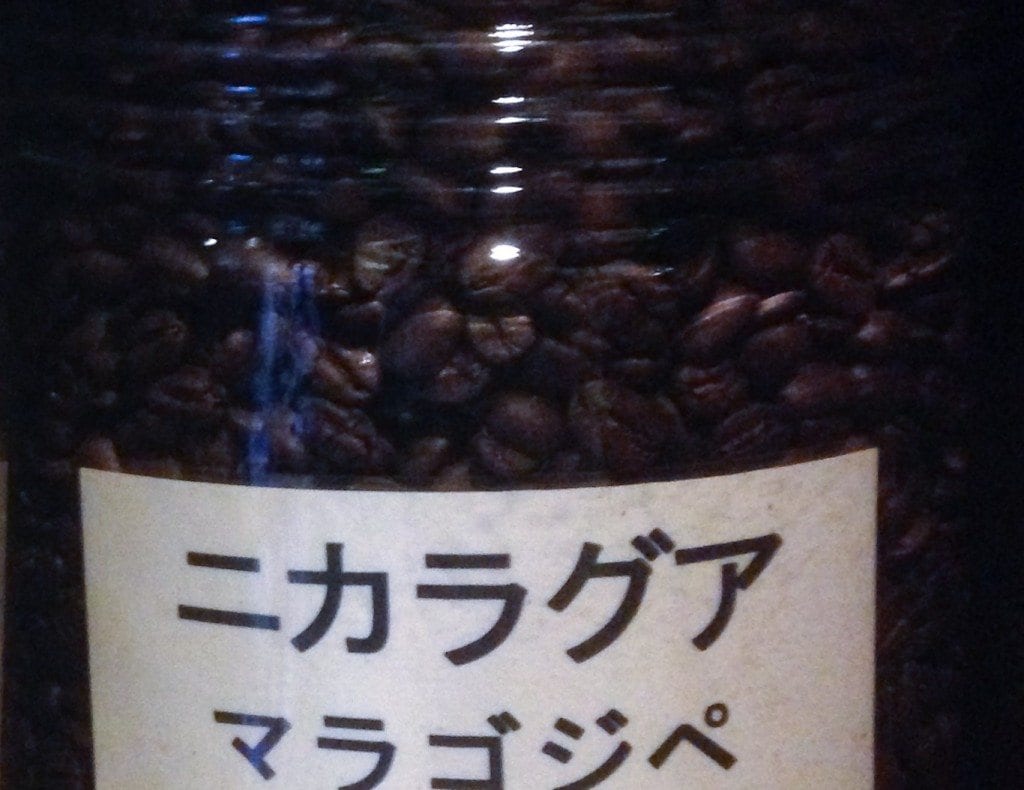 Nicaraguan Maragogype, roasted in a way that seems to go against every rule of specialty coffee. Credit: Christine Seah

Then I ask about the brew method. Uchida-san points to his colleague, about 2 feet away. He’s pouring a pot of boiling-ass water over a sock. 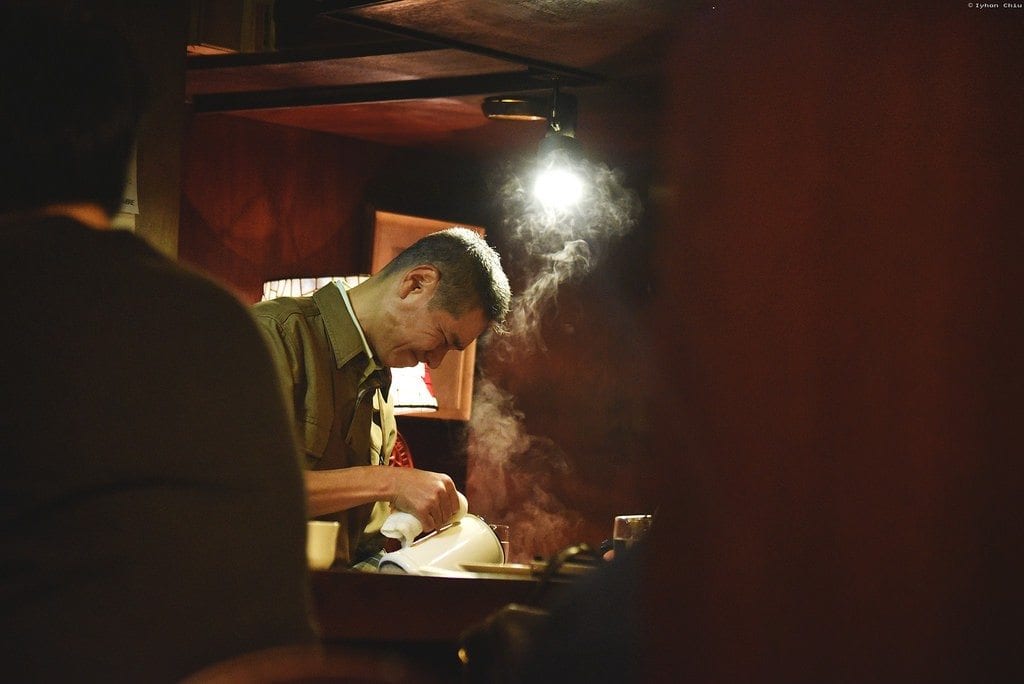 Boiling hot water may be spurned in specialty cafés, but not in Café De l’Ambre. Credit: Lyhon Chiu, Flickr 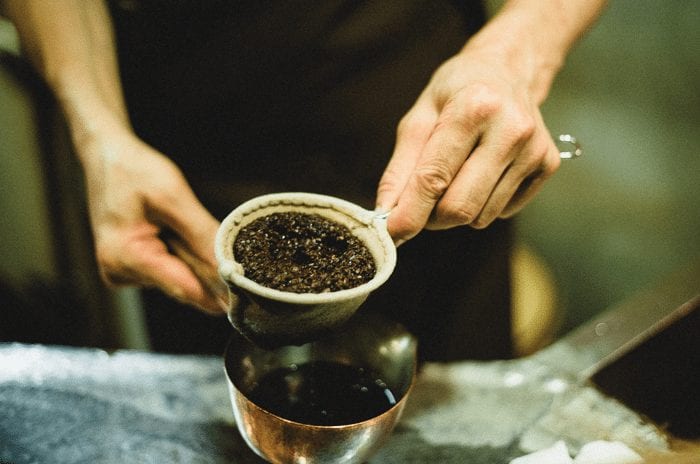 Brewing with a sock – it’s like stepping back in time. Credit: Good Coffee

So let me just summarise this for you: I was going to drink a coffee that was 7 years old, roasted dark as dark could be, and brewed with boiling water over an old cloth sock.

This defied everything I was taught to be meticulous about. Beans have X amount of days as a shelf life, good brewed coffee should always be roasted light, water temperature should be regulated (and definitely NOT boiling), and you should definitely always use the newest, most technically advanced brewing gadget available on the market. Screw any of these factors up, and you’d never get good coffee. Right?

I can’t describe to you how good that cup of coffee was. It was a deliciousness that was so obvious and so unquestionable that I was left staring into it in silence. It was the kind of coffee that was so good that it would just shut you up immediately.

Uchida-san smiled at me from the corner knowingly. He’d probably seen that exact same reaction from thousands of customers, and was quite obviously amused by the magnitude of mine.

I subsequently ordered something familiar to me (Peaberry Yirgacheffe, aged 20 years), and then decided, for the heck of it, to order the most foreign-sounding coffee they had on the menu (CarmoShimosaka Bourbon, aged 21 years). Both these coffees were nearly the same age as me, to put that into perspective.

You weren’t expecting to-go cups, were you? Credit: Christine Seah

What both of them had in common was an incredible depth of flavour and an acidity that was pronounced but not sharp. Instead, it was softer and more rounded. The aftertaste was also impossibly clean, without compromising the body of the coffee. It was the perfect balance of coffee: everything you love about the drink elevated to impossible heights.

I also ordered the “Water-Drip coffee”, the house cold-drip. Again, ridiculously good. It felt like I was drinking a chocolate bar, and then someone had literally sprayed essence of raisin on the roof of my mouth.

Uchida-san, at this point, was stifling a laugh at my over-the-top enthusiasm for the coffee. As for me, I didn’t think I could get any more surprised today.

But then Uchida-san asked, “Would you like to meet the roaster?”

He pointed to an old man who was seated in the front corner of the café, smoking a large tobacco pipe. “That’s Sekiguchi-sensei. He’s 102 this year.” 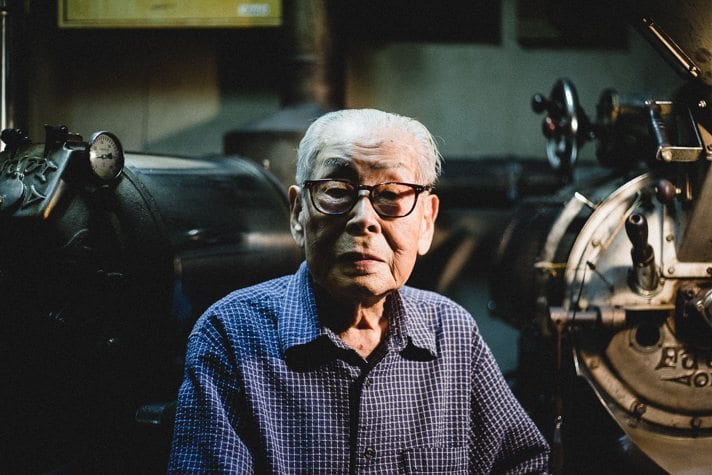 Ichiro Sekiguchi was the owner of the store, and had been roasting and making coffee there every day since its opening (that’s 68 years). Apparently, his interest in it began in 1929, when he decided that he wanted to drink a good cup of coffee but couldn’t find one anywhere.

Shortly after WW2, Sekiguchi worked in the cinema projector industry, a booming business during the Showa period in Japan. However, this all changed when customers encouraged him to open his own café, because the coffee that he made was just so damn good. (We can agree with that.)

Sekiguchi opened his first shop, “Alkaloid Beverage Institute”, in Ginza in 1948. It was not easy to keep a coffee shop running in the early post-war period; getting a steady supply of sugar and other essentials was a constant challenge. Yet he managed and, after running his business for 20 years, he eventually moved to Ginza and set up Café De l’Ambre. The café’s decor and brew methods have remained unchanged to this day.

I left the café feeling enlightened and very humbled. I realised that I’d fallen into a rut, where I felt that I knew a lot about coffee and the café business. But Café De l’Ambre had taught me that you don’t need fancy gimmicks, the newest devices, or a brunch special to make something work.

When you have an extraordinary product, one that takes decades to perfect and refine, you don’t need anything else.

My experience at Café De l’Ambre inspired me to truly dedicate myself to my craft. But above all, this trip into the past left me feeling optimistic about the future of coffee and the people behind the cup.