Korean coffee culture is young. It’s not just specialty that’s new; coffee itself has only become popular with ordinary people in the last fifty years or so. Yet that doesn’t mean it hasn’t arrived with a bang. Chain specialty coffee stores? Exponential growth of cafes? Immense coffee consumption? Korea has all that – and more.

In fact, there are even a couple of key coffee festivals coming up on Seoul’s expo event calendar right now:

But if you’re going to those events, you’d better brush up on your Korean coffee culture knowledge. With help from Choi Ik Chang of Coffee Libre, Seoul we’re here to take you through its colourful, if short, history right through to today.

Korea was introduced to coffee centuries after its European counterparts. As of such, the drink experiences a very slow-moving popularity (although, thanks to an immense growth spurt in the past couple of decades, it’s definitely caught up now).

In 1896, Emperor Gojong became the first Korean to try coffee – and subsequently Korea’s first coffeeholic. It was a dangerous time in Northeast Asia, and after the assassination of the emperor’s wife, Empress Myeongseong (otherwise known as Queen Min), he and Crown Prince Sunjong went into refuge at the Russian Embassy. There, Antoinette Sontag, the German sister-in-law of the Russian consul general at the time, offered the emperor a cup of coffee. Needless to say, he was hooked.

The Dabangs & the Spread of Coffee

6 years later, Gojong supported Antonoinette Sontag in opening the first Korean dabang (coffee shop) for foreign diplomats. Fast-forward to the Japanese occupation of Korea (1910-1945), and the Japanese began to open more and more dabangs, meaning coffee was no longer the province of non-Koreans.

So who were the people drinking coffee? For Emperor Gojung, allowed to live but confined to the royal palace Changdeokgung, coffee remained his favorite drink. In addition, many of society’s elite and wealthy individuals – along with royals, politicians, businesspeople, artists, and intellectuals – fell in love with the drink. It became a symbol of Western culture and, as of such, status. 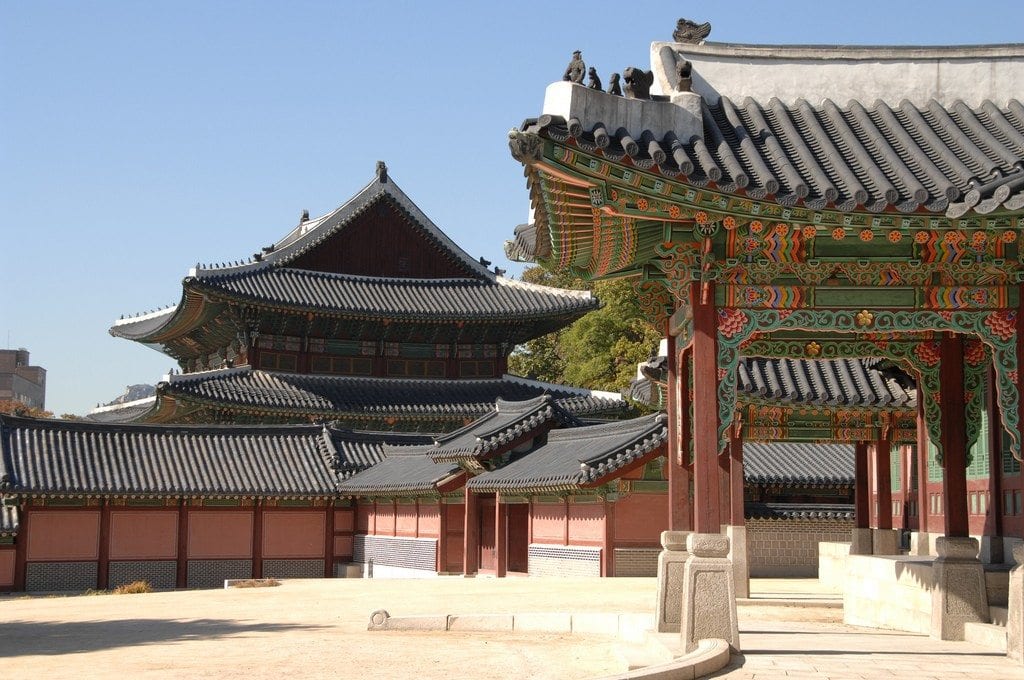 The next major development in Korean coffee culture first appeared during the Korean War years (1950-53), when the Americans introduced instant coffee. However, as an imported product requiring foreign currency exchange, it remained scarce.

Making it even harder to access coffee, dabangs often doubled as political meeting places. In this era of political anxiety, the authorities kept a watchful eye on them and their patrons (just like in Sweden and Turkey a few centuries before).

Things all changed in the 1960s, however, thanks to local company Dongsuh Food. Under licence to Maxwell Housse, they began production of instant coffee – and the drink left the realms of the elite and the political troublemakers. For the first time, it became popular among the middle class.

In the 1970s, the people visiting dabangs changed yet again. Now, the became the place for dating couples and university students. For students, they were an outlet for their freedom of expression; they would gather to talk and listen to live DJs perform.

Coffee also began to expand outside of the traditional dabang. In the 1970s, the coffee vending machine appeared in offices and universities. This proved to be a lucrative business into the ‘80s and ‘90s. 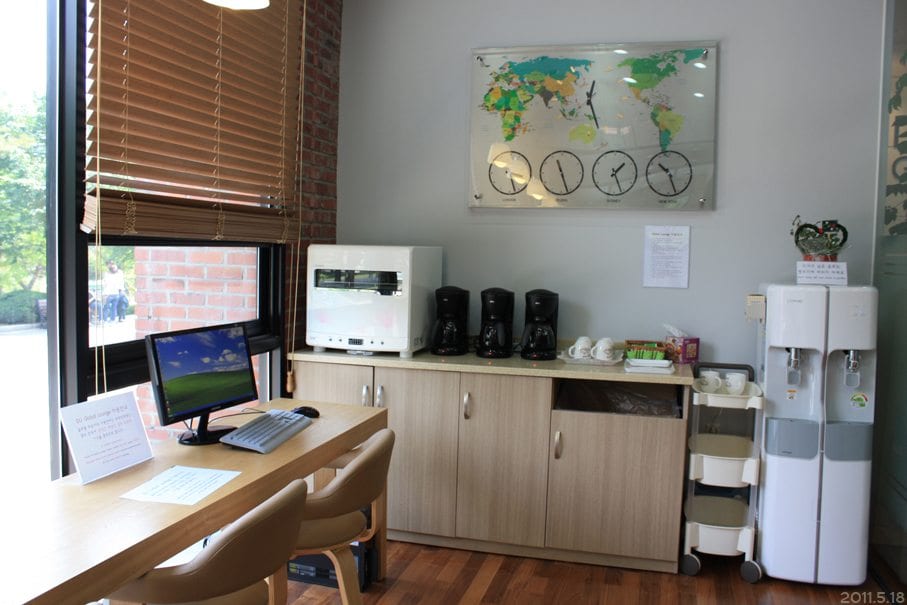 A “global lounge” on campus at Daegu University, offering Internet access, free coffee, and the opportunity to speak with people in English. Credit: Namju Lee, Flickr

And while coffee houses still existed, they were changing in nature. By the 1980s, “modern” and themed cafés emerged. They sold all different kinds of coffee, tea, and even soda beverages, and for the first time, espresso machine coffee was available.

Roaster cafés also began to appear, and people began to drink quality coffee that was both roasted and brewed onsite.

According to Choi Ik Chang of Coffee Libre (a Korean specialty coffee chain), this is the second significant occurrence on the modern coffee scene after the appearance of instant. However, Choi Ik Chang says that “full-scale growth isn’t seen until after 1989, at a time when Korea experienced high economic growth; people’s income increased and they had enough money to improve their quality of life, freeing them up for the valuable experience of travel. People began to experience coffee’s various flavours rather than one generic taste”. 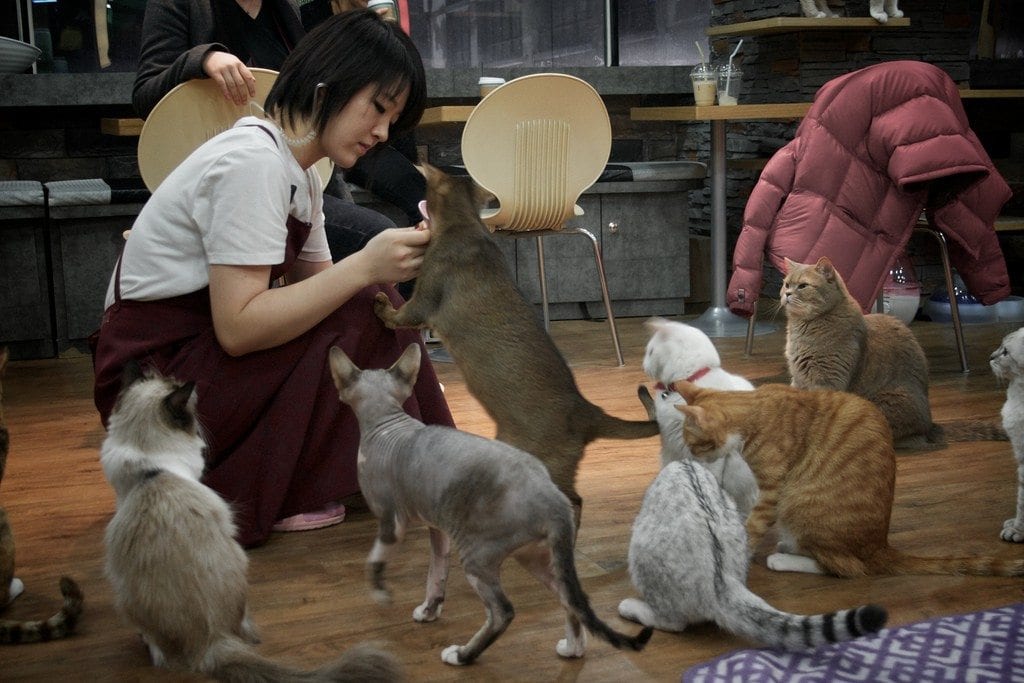 There are a myriad of themed cafes in South Korea, including a Cat Cafe. Credit: Ecodallaluna, Flickr

The Rise of the Espresso

In the 1990s, we saw a greater diversification of coffee houses. The introduction of the early cafés paved the way for coffee chain stores, self-serve, bottomless cup serving options, and take-away coffee – but it also led to coffee being taken more seriously, with a growing interest in coffee quality and espresso-based beverages.

Yet the adoption of espresso, along with third wave brew methods, was not an easy transition. According to Choi, in the early nineties “the barista often used the drip brewing method with the Melitta, Kalita or Kono drip filter and they made nice, clean cups of coffee. This method took no less than three minutes for one cup of coffee. It was fast enough for table table service, but rather slow for takeaway.”

As for espressos, “for some time, espresso wasn’t welcome, being seen as dark and rather bitter. Also, it was served in a demitasse cup which was not so familiar. Nonetheless, it was strong enough for making latte and americano (long black) – fast and easy to make”.

Yet despite initial distrust, by the mid ‘90s the espresso revolution was in full swing.

A Nation of Coffee Drinkers

With a café every 50 metres, it’s a fiercely competitive market. Price wars can be devastating for many businesses. Yet for consumers, it’s glorious. Koreans drink coffee 12.3 times per week – more often than they eat kimchi! And while instant still dominates at home, the cafe experience is leading to an increase in consumption of high-quality coffees. 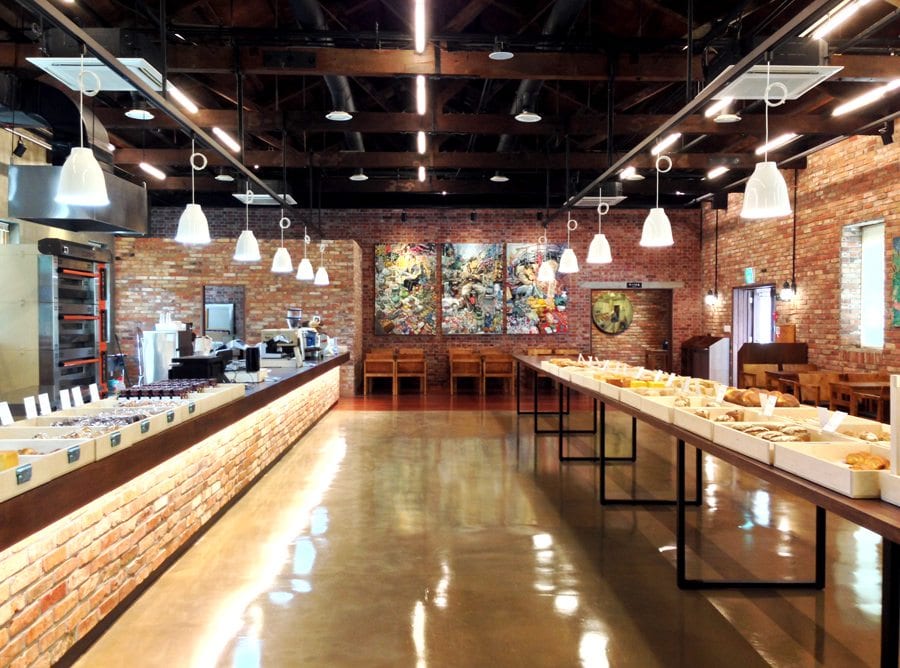 In fact, even specialty coffee has become a chain in this country.  Yes, it might sound like an oxymoron – but it’s true.

Paul Bassett, 2003 Australian and World Barista Champion, made a deal with Korean company Maeil Dairy allowing them to use his name and, to quote them, “his recipe”. In 2009 – the year specialty really boomed in Korea – the first Paul Bassett specialty coffee shop opened in Gangnam, Seoul.

As it turned out, the idea of high-quality, single origin coffees brewed by professionally trained baristas was extremely popular. This year will see the opening of the 70th Paul Bassett store and it’s forecast that, by 2020, there will be 200 of them.

Another specialty chain is Coffee Libre. In fact, it’s one of Caleb ‘Tiger’ Cha, current Australian and World Latte Art Champion, favourite specialty roasters – but roasting isn’t all they do.

So we spoke to Coffee Libre founder Pil Hoon and employee Choi Ik Chang to hear about their business.

So what has he brought to Korea’s coffee world?

Coffee Libre’s theme is inspired by the wrestler character Nacho Libre. The macho name reflects their attitude to their role; as far as they are concerned, they are coffee hunters devoted to seeking out the best specialty coffees. 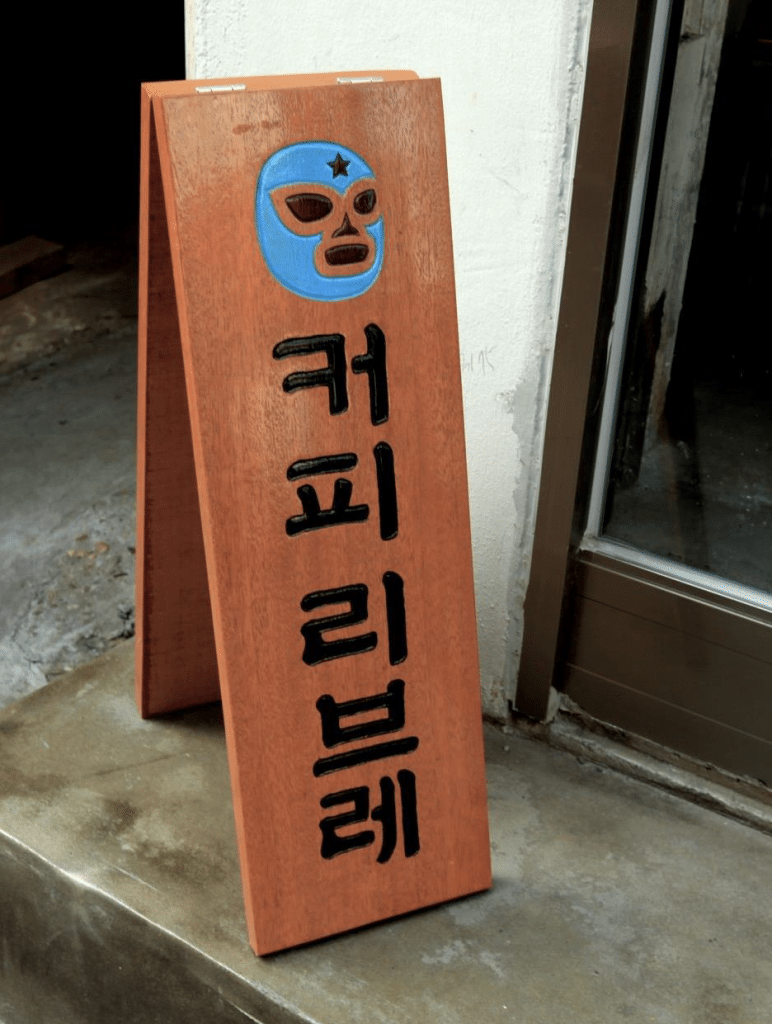 Passionate about direct trade, Coffee Libre buy from over 50 farms and via auction throughout Africa, India, and Latin America in a stringent single origin and Cup of Excellence programme. They say the market demand for high class coffee has seen COE imports grow by almost 50% each year since Coffee Libre’s inception in 2009.

In fact, for Pil Hoon, coffee is far more important than profits. He is renowned for his record-breaking bids at coffee auctions (documented in the Wall Street Journal), that he places purely because of his desire to showcase it to the South Korean market. Low profit margin? No problem – so long as it’s good coffee. It’s even been suggested that Pil is one of the reasons behind the global price hikes of specialty coffee. 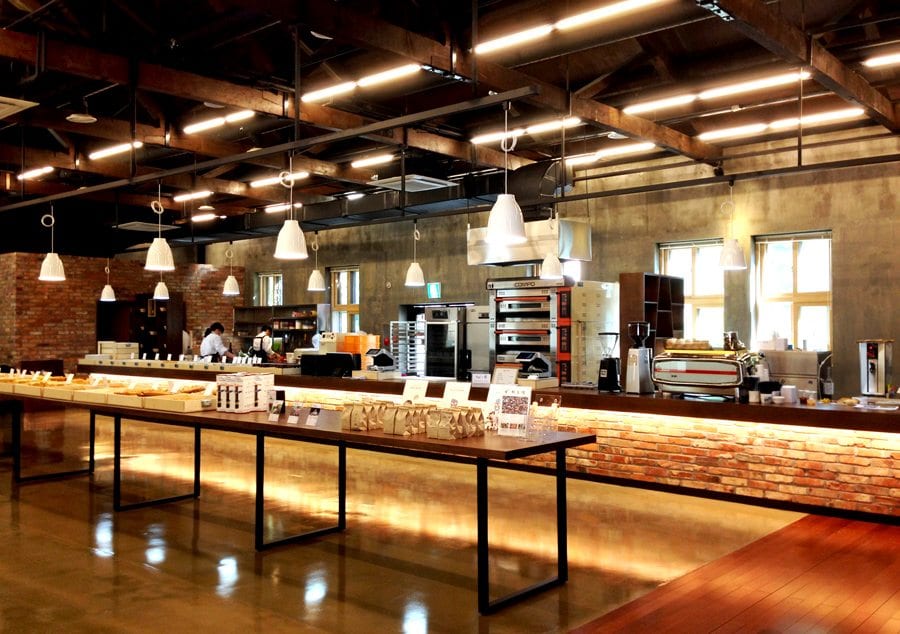 It’s clear that in South Korea, specialty coffee and chain coffee don’t have to be opposing. In fact, they go together very well.

Yet Korea had their own version of specialty coffee long before the chains arrived. Choi argues that specialty coffee is just as much about the cafe ambience as it is about the coffee – and that’s something that Korea’s been doing well for a long time.

In the early ‘80s, in fact, Choi described the coffee scene as “some kind of utopia where customers could escape from crowded streets or a busy office to forget about stress and put problems on hold – while enjoying an amazing, flavourful beverage, in a calming, visually appealing environment… which can’t be said for alcohol! Thanks to a cup of drip-brewed coffee in a special place, people could have a bright outlook for the day ahead”.

After 1989, however, the cafe scene had changed. This generation had grown up with Starbucks and espresso culture. They’d seen chain coffee stores and drunk quality coffee. Yet the physical space, the cafe’s environment, was – and is – still an important part of the Korean specialty coffee industry.

The concept of an escape is intrinsic to the Korean cafe culture. “We now have 20,000 cafes in Korea, and almost all of them have no less than four tables with chairs (Coffee Libre’s Yeonnamdong location is a rare exception),” Choi says. “The current cafe business can be described as ‘extremely short term rent’ or ‘quantum rent’. Most customers like to spend as much time there as possible.” 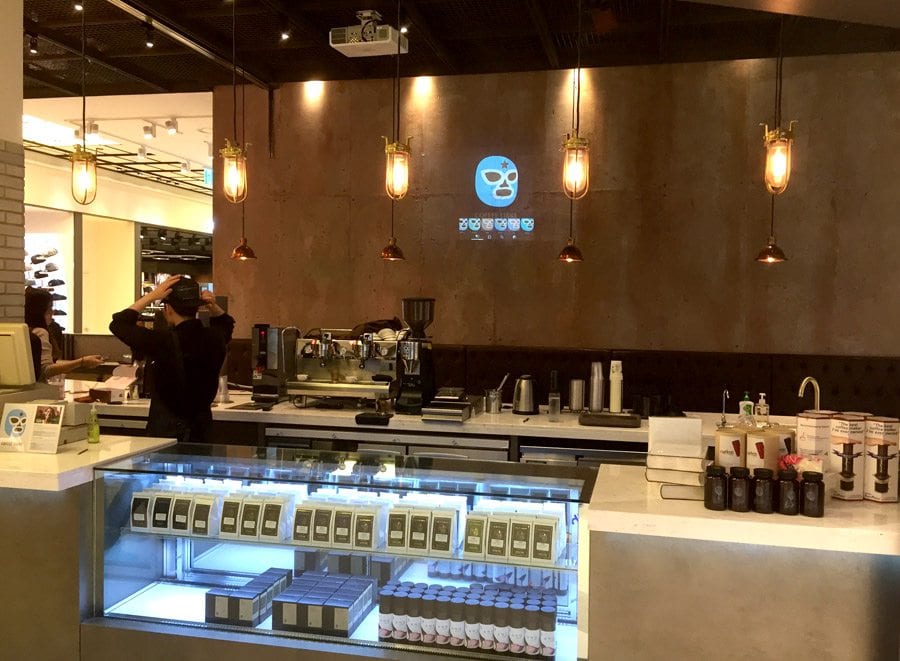 Yet as idyllic as a coffee-haven on every corner may sound, cafe culture may be its own worst energy. The average cost of a cup of coffee is 4,000 Won (US$3.70), so you might expect coffee professionals to see a nice income. You’d be wrong: competition and high rents – thanks to these spectacular coffee house spaces – are swallowing profits.

And it’s not just the coffee houses that are feeling the squeeze; the coffee is, too.

According to Choi, “the global economic recession could not deprive people the happiness of drinking coffee, but it could make them move to cheaper coffee.”

That’s not the only reason, either. Choi says, “Nearly all cafes are now selling non-coffee items, which at one point, they never dreamt of… stores specialising in only coffee are rare.” He adds, sadly, “Like a giant star, we bloom so fast but quickly become old.”

Let’s hope Choi is proven wrong. Despite its young age, it’s clear that Korean coffee has a lot to offer.