Everything You Need to Know About Mahlkonig’s EK43 Grinder

Sometimes the future takes an unexpected turn, making forecasters look more than a little foolish. Just ask the former president of IBM, Thomas J Watson who in 1958 confidently stated: “There is a world market for about five computers”.

Yeah. How many computers are in your house?

Then there’s the 19th century British MP who, based on the rate of population growth in London at the time, and the number of horses needed to support such growth, concluded that by the middle of the twentieth century the capital would be six feet deep in manure. (Aren’t you glad cars came along?)

In a slightly less comical but similar vein, I don’t think there are many people in the speciality coffee industry who, five years ago, foresaw the current popularity amongst leading coffee shops of a 30-year-old design of grinder originally intended for spice grinding. That grinder is, of course, Mahlkonig’s EK43.

From Spices to Espresso

The EK originally found favour in the coffee world as a grinder for filter coffee, where its advantages (which I’ll discuss later) outweighed its inherent weakness: its lack of on-demand dosing. 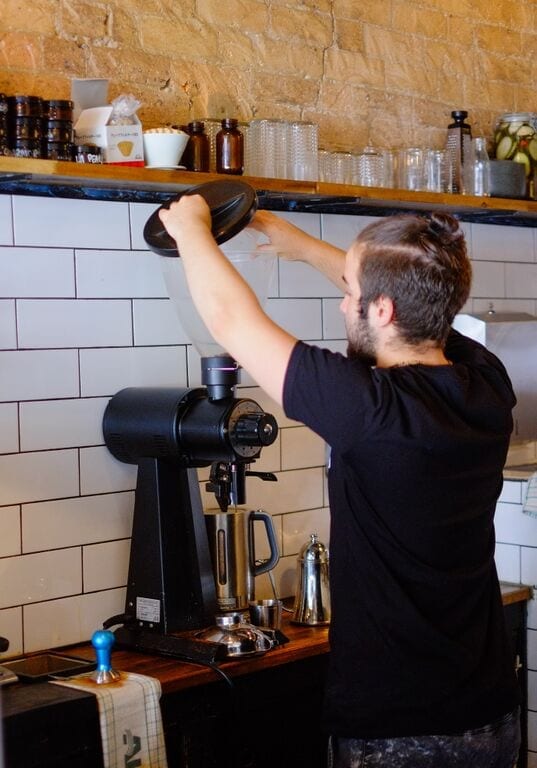 Barista, Jacob Denaro, dosing an EK hopper with beans weighed out in advance for service. A solution that’s become standard to the EK’s repurpose as a cafe service grinder.

However, this all changed after Matt Perger’s routine in the 2013 World Barista Championship, where the EK43 took centre stage for espressos. Although Perger isn’t credited with being the first to use the EK to grind for espresso, he was certainly the barista who did the most to popularise it.

So what’s so good about it? And if it is so good, then why isn’t everyone using it? Let’s review the Mahlkonig EK43.

The main advantage of the EK43 is it’s uniformity of grind. All espresso grinders produce a bimodal particle distribution, and the EK is no different in this respect. That is to say, a typical dose will be comprised of two main sizes of particles. There will be fines, which are typically below 100 microns, but in a larger proportion by percentage volume, there’ll also be particles in the 200-1000 micron range. Yet with the EK, the spread of particle sizes is significantly less than with other grinders. 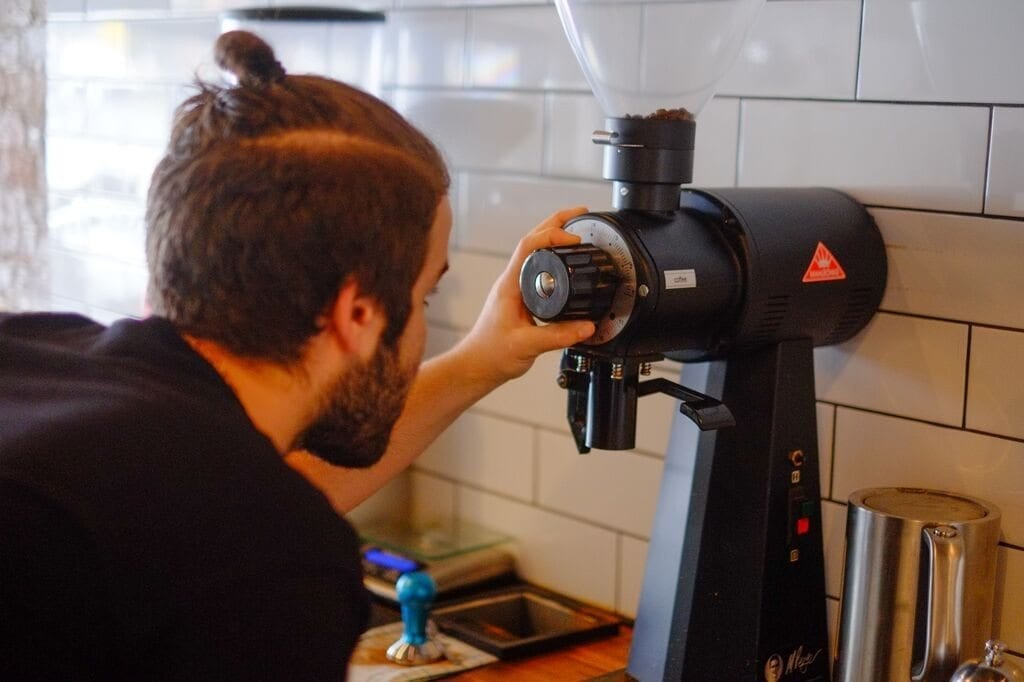 Setting the grind for an espresso. The EK has become a go to for cafes looking to have one grinder they can use for feature coffees (think single origins) on espresso and for filters.

Perger and others from the speciality coffee world have analysed the EK43’s particle size distribution and found that, contrary to initial assumptions, it doesn’t produce a more even grind because it generates less fines (in fact, it produces more fines than many other popular espresso grinders). Rather, for a grind setting resulting in a given extraction, it produces more evenly sized particles than other grinders. Essentially, its modal particle size is smaller and, therefore, closer to the size of the fines than its competitors’ modal particle size. It also produces fewer very large particles (also known as ‘boulders’).

SEE ALSO: 5 Barista-Certified Rules for “Dialing In” Your Coffee Grinder

A More Even Extraction

Curious as to why particle size affects extraction? Small particles have a large surface area and, therefore, extract relatively easily—while the opposite is true for large particles. 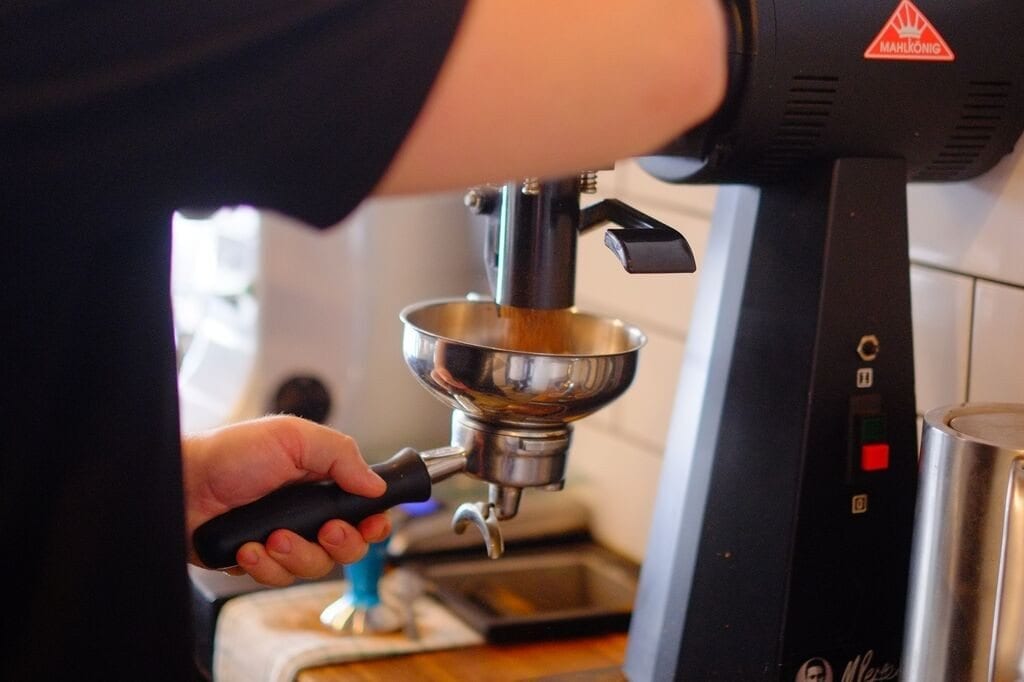 An unusal site for most patrons is the EK dosing into a group handle. Though not a straightforward process, many argue that the results are worth to extra effort.

The EK produces particles with greater uniformity of size, so its extractions are comprised of a higher proportion of similarly sized and, as of such, similarly extracted particles—which has a large impact on flavour.

The upshot of this is that EK shots can be pushed towards higher extraction yields without the negative side effects that this usually entails with traditional grinders. 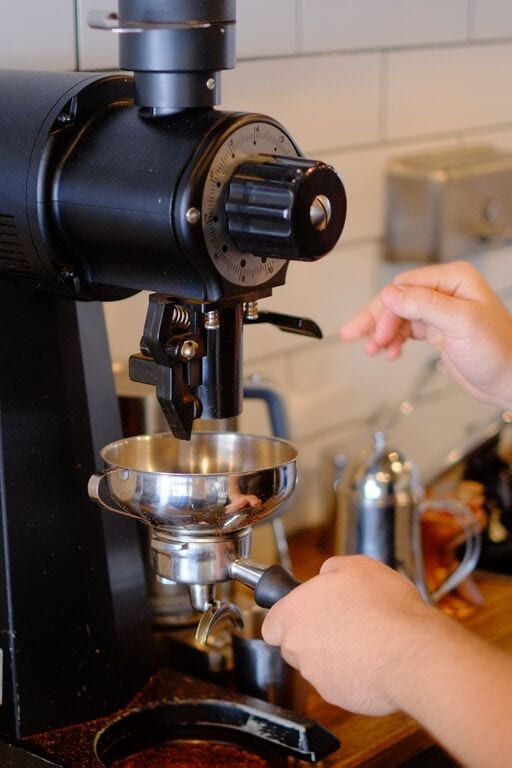 The EK required you “knock” out the remaining grounds via actuating a spring loaded flicker connected to what was designed to be a bag clip.

Many grinders, particularly those with conical burrs, struggle to produce shots with extraction yields above 20% without the shot becoming excessively diluted or just, well, not tasty. Yet this is primarily a consequence of grind unevenness and those varying extraction yields. The EK, in comparison, is able to produce tasty espressos at higher yields because the espresso produced using it isn’t comprised of such a large range of different extractions.

Downsides of the EK43

Given these advantages, you may wonder why the EK43 is not a more common sight as an espresso grinder in speciality coffee shops. The answer is primarily related to its usability; there is no on-demand dosing capability or even a mechanical doser.

Coffee shops that use the EK for espresso usually resort to pre-measuring individual doses of beans which are then stored in containers. This is, of course, time-consuming and pretty inefficient from a space-utilisation viewpoint (hundreds of doses of beans in small cups take up a surprising amount of counter space). 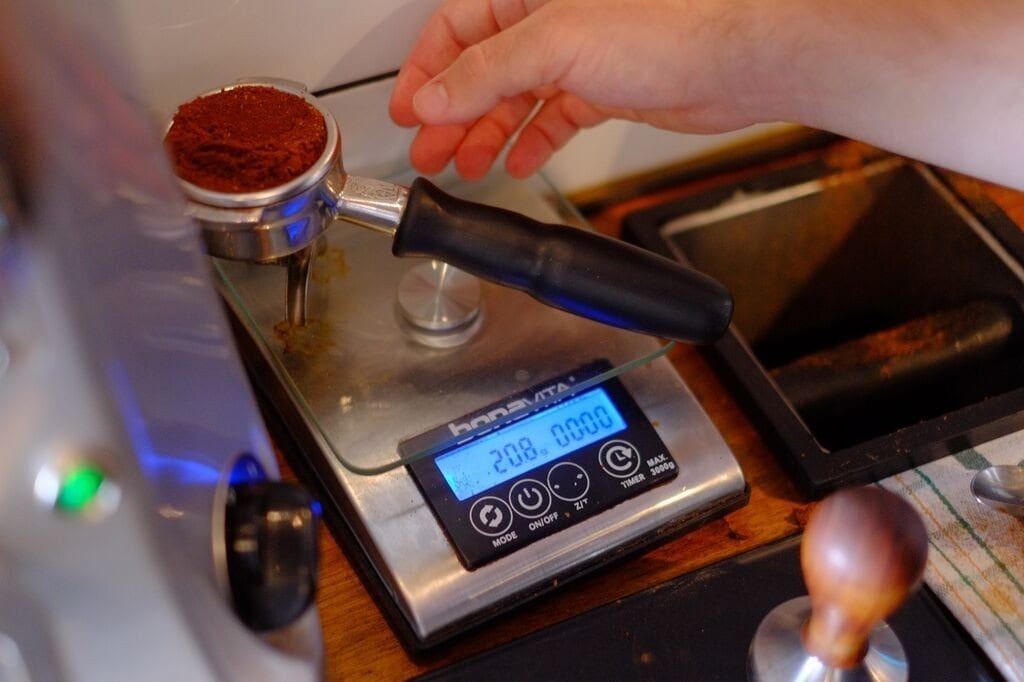 Given the EK’s repurpose, in this case as an espresso grinder, weighing the dose after the facet if crucial. Most baristas will slightly overdose when loading the hopper in case grounds are lost when flicking out the remainder.

However, there are some small perks when it comes to the usability of this item. The inconvenience of storing individual doses is partly offset by the fact that the orientation of the burrs means that there is very little retention, which significantly reduces wastage—a major advantage when dialing in. Single dosing also enables multiple espressos to be offered without the need to purchase additional grinders (although workflow is slightly slowed by the need to change grind settings when switching between beans). 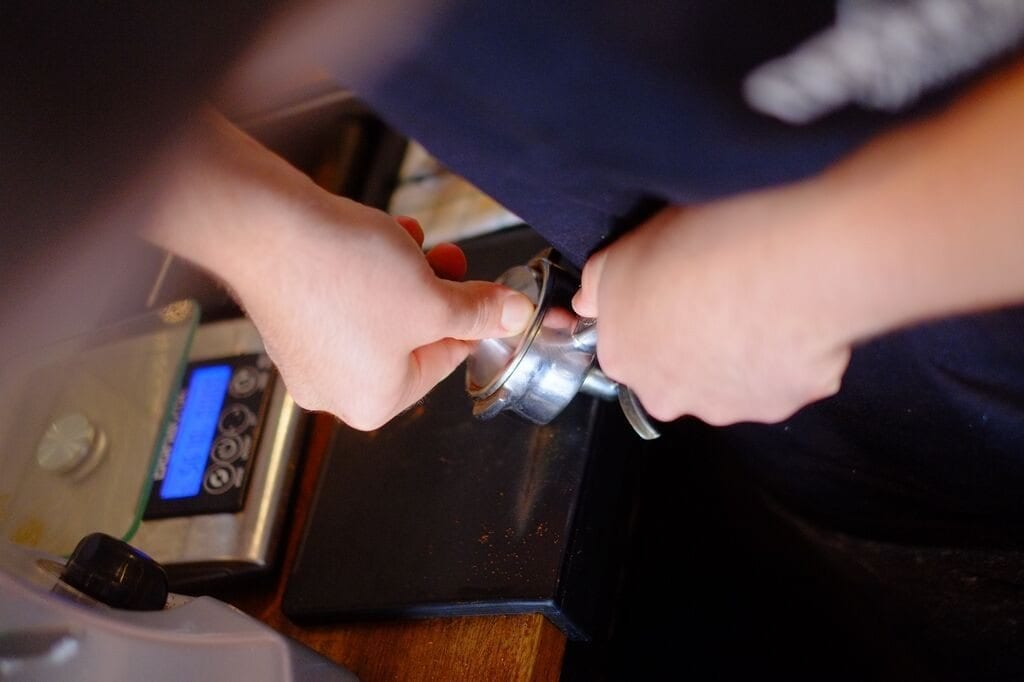 Nutation, or rotating the tamp so pressure is applied evenly around the puck is designer to slow flow rate and in theory improve extractions. After a day of this, your wrist can feel a little sore.

If this all sounds too much like hard work, there is a solution waiting in the wings: the Mahlkonig Peak, which combines EK43 style burrs and particle size distribution with the on demand grinding features of its existing K30 grinder. The only downsides are the anticipated price (similar to the going rate for an EK) and the fact that you’ll need to buy more than one if you want to offer multiple espressos simultaneously.

Until the Peak’s public release, though, the EK43 remains the benchmark grinder for high extraction espressos.

Have you tried the EK43? Let us know your experiences in the comments, on facebook, or on instagram.

Written by J. Prestidge, Director of Repack Espresso in Bath, and edited by T. Newton.