I love coffee. I mean, I really, really love coffee. My love for it began at a time when most Aussie kids are enjoying cola and ice cream, dipping chips into soft serve (Whippy for any Brits here), or eating sausages and ketchup. There I was, only just turned 12, in our small, cozy Persian-carpeted apartment in Serbia when my dad woke me up at 6am and, in the early light of a warm summer morning, said, “Son, it is time for you to start drinking Turkish coffee and to learn how to make it. You will now be getting up with me every morning to drink and make coffee for both of us”.

So, at the ripe old age of 12, I began this delicious love affair with coffee. And while I now drink all kinds of coffee, Turkish coffee, my first love, will always be the most special; it will always be the romantic lead in my story.

The thing is, the story of Turkish coffee is spectacular—even if it doesn’t involve father-son rituals in Serbia. It’s a story of political intrigue, of religion, of violence, and of love. 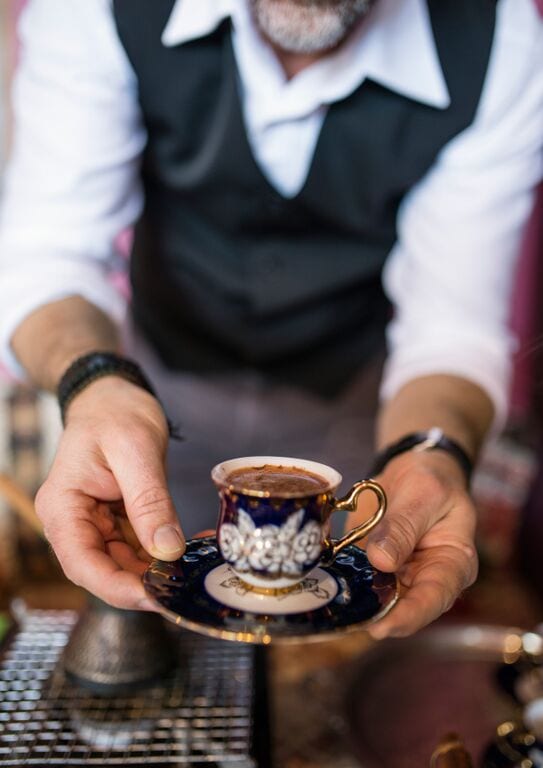 The Ancient Origins of Coffee

The story of this aromatic brew begins in Ethiopia, although it’s harder to say when. Some historians believe coffee is between four to five hundred years old, but the coffee bean itself could even be as old as man. Fossilized remains of it have been discovered next to ancient human remains in the southwest of Ethiopia, the same place where the coffee beans were first harvested from wild coffee plants.

So how did the consumption of coffee begin? Well, we simply don’t know, although the legend of Kaldi the shepherd is pervasive. The story goes that Kaldi noticed the increased energy of his goats after they ate coffee cherries, so he ground the berries in a mortar, mixed them with animal fat, and rolled the paste into a ball for convenient portability. The combination of caffeine, sugar, fat and 15% protein meant Kaldi had enough energy to hang out with his goats all night.

Some versions of the myth continue to say that Kaldi brought the coffee cherries to an Islamic monastery but the monks, disapproving of the effect, threw them on the fire. When they noticed the delicious aroma caused by this, they doused the fire, gathered the roasted coffee beans out of the ashes, ground them down and then diluted them with water—creating the world’s first cup of coffee.

Yet while the earliest beans may have been found in Ethiopia, it appears that the first coffee drink actually emerged elsewhere.

Coffee was given its name, not by the place of its origin (Kaffa in Ethiopia), but from the Arabic word qahwa, meaning “wine”. This reflects coffee’s spread to Yemen, where the first coffee drink was consumed by ancient practitioners of Sufism, a mystical sect of Islam. Sufis drank ground coffee berries mixed with water as part of their daily ceremonies in order to stay awake for their nightly prayers and remain energetic during the twirling, hypnotic dances they were famed for. It is this Yemeni coffee that we use in Turkish coffee today.

The journey doesn’t end here. From Yemen we travel to Istanbul, where in 1555 two Syrian traders brought the first coffee beans to sell at busy, bustling markets. Turks discovered that they could make a delicious, bitter, dark drink from the fermented pulp of the coffee berries that both provided energy and curbed hunger. Again, this was immensely useful for dervishes, a subset of Sufi ascetics.

It wasn’t only sultans who were treated like royalty. Turkish men would also be given a cup of coffee by prospective brides. The woman’s suitability as a wife would be judged based on the quality of her brew. 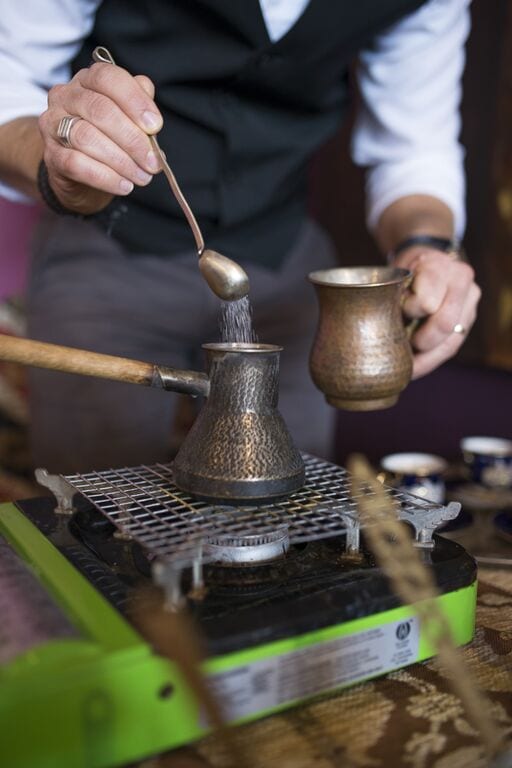 As time went on, though, it wasn’t just the women who were being judged. Potential brides were still required to make coffee for their potential husbands, but there was a twist: a sweet coffee meant she was happy with the choice, but bitter coffee showed she was decidedly unimpressed. Talk about leaving a bitter taste in your mouth…

Coffee was integral to the social and courting rituals of the day in Turkey. Wealthy families built special rooms that were only used for coffee drinking. Coffee houses became common locations for business meetings and socialising, particularly for men. Yet this didn’t mean women were excluded from drinking it—in fact, a married woman was legally allowed to divorce her husband if he didn’t provide her with a daily quota of coffee.

The Prohibition of Coffee

Yet soon, coffee gained an unsavoury reputation. Part of this was religious; as it grew ever more popular, people spent less time worshipping and more time drinking and socialising. Coffee went from being a sacred beverage to the root of all evil.

The other reason for the concern over coffee was political; the drink was perceived as a threat to the Ottoman Empire. Just like in Sweden, the ruling classes believed that when people gathered to drink coffee, they were also banding together to question the political doctrines of the day and, ultimately, cause social unrest.

In 1656, the Ottoman Grand Vizier Koprulu established laws that shut down the coffee houses and outlawed coffee drinking all together. The punishments for ignoring this law was extreme. A first offence would result in being beaten with a cudgel. A second offence, however, would result in being sewn up in a leather bag and thrown into the nearest river to drown. (Think about that next time you say, “I’d die for a coffee”.)

Despite the strict laws and punishments, little was achieved: coffee remained popular in Turkey and even spread to neighbouring countries.

Coffee: The Spoils of War

Although coffee typically spread through trade and travel, coffee historians tell us that it was first introduced to Europe by an accident of war. In 1683, when the Turkish army fought the Austrian army, the Turks accidentally left sacks of coffee beans during a retreat from the gates of Vienna. The Austrians quickly realized the treasure they had been given and developed their own style of coffee. 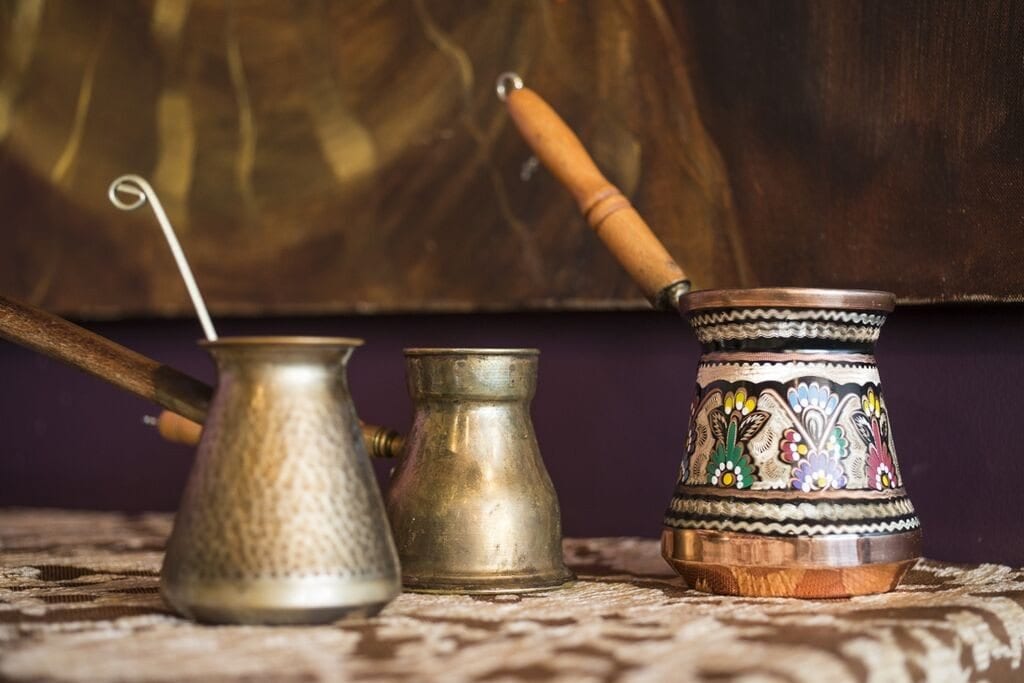 Prohibition is over, kids. Get your brew on! Credit: Jan Strandstrom

Coffee’s story is no longer as dramatic (unless your father is as fanatical as mine), yet it’s nice to know that Turkish coffee houses continue to be a place to meet friends and run business—all while sipping on a strong, hot cup of coffee.