The History of Croatian Coffee & Its Journey to Specialty

Croatians love their coffee. Forget a café on every corner—here, entire streets are lined with café bars. Coffee-drinkers fill the bars, looking—and no doubt feeling—at home. They sip their coffee, with or without a cigarette; on their own, or with friends. It doesn’t matter if they have company; it’s a pleasure enjoyed either way.

See also: Torrefacto – How a Post-War Roasting Process Has Ruined Coffee in Much of Europe

A Tradition Steeped in Old-World History

Coffee culture in Croatia is distinctive. It’s not Italian, it’s not Turkish, it’s not even Austro-Hungarian. Instead, it’s an eclectic mixture of all three. So how did that happen?

The Introduction of Turkish Coffee Culture

Let’s begin, not with Croatia, but with the Ottoman Empire. The Ottomans had a long history of trying to conquer the region, going back to 1443. In fact, they spent over 100 years fighting the predecessors of modern Croatia. These numerous attempts led to the introduction of Turkish coffee—and with it, the drawn-out social ritual of talking, gossiping, or doing business over coffee.

Today, the Turkish method is still by far the preferred way to enjoy coffee in Croatian homes, particularly when visitors come over. It’s still made in the traditional method, using the long-handled, narrow-spouted old school čezve (pronounced ‘chez-ve’). The traditional coffee of choice is a super finely ground 100% Arabica medium roast from the Minas region of Brazil.

Some aspects of the tradition have changed, however. In the Islamic tradition, it was reserved for men. Yet since the passing of the French Revolution, women have patronised coffee shops in Croatia. More recently—in fact, even just a generation ago—villagers would roast their own beans in a pan over an open fire. They would then hand mill the beans in a traditional brass device: a task that took hours and was often reserved for children. 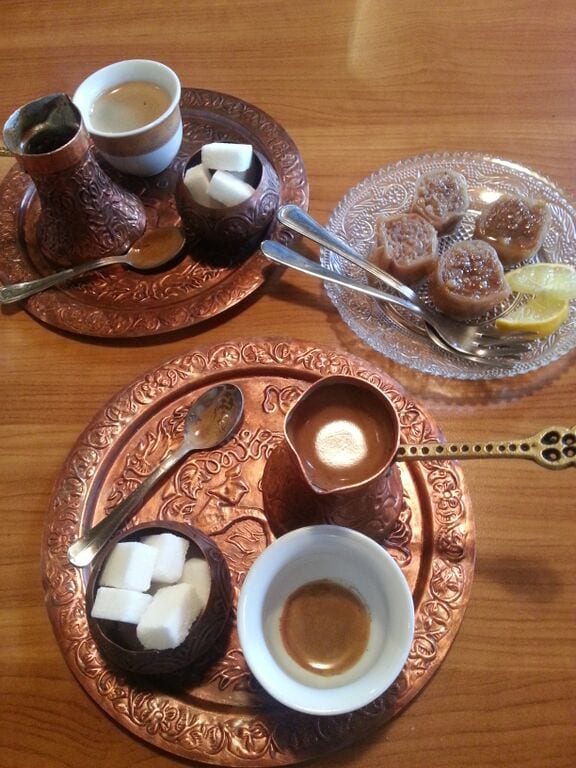 Turkish coffee is still the most popular brewing style in Croatian homes.

Moving forward to the 18th century, we see the emergence of the Austro-Hungarian era. In this period, coffee culture became an opulent, hedonistic affair, thanks to the introduction of kavana or coffee palaces.  The first Croatian kavana opened in 1748 in Ban Jelacic Square, Zagreb, and served coffee, tea, and chocolate. In kavanas, coffee was typically paired with fine cakes, desserts, or sweets. The coffee was supplied from Holland, the centre of the European food and spice trade. Each town also had a Gradska Kavana, or town café.

You can still glimpse the history of the kavana today, if you wander around Zagreb, Split, Drnis, Dubrovnik, or other Croatian towns and cities—but it’s not the same as before. Moderato Cantabile in Sibenik is an example of a revived kavana. More recently, the Johann Franck kavana in Zagreb has been restored. It’s styled on the traditional coffee house aesthetic but it also serves food and alcohol.

The most recent influence on Croatia’s coffee culture is the Italian espresso. Yet it wasn’t just Croatian coffee culture that changed; the Italian espresso culture also had to adapt. Italians may drink espresso quickly, but Croatians, with their long history of turning coffee into an event, were not going to adopt that. Instead, Croatians made a ritual out of espresso. They retained their own drawn-out enjoyment of coffee with friends, partners, colleagues; for pleasure and for business. To say “let’s go for coffee” in Croatia means so much more than just drinking coffee. In fact, it’s closer in meaning to let’s get things done than to let’s take a break.

What Brands Do Croatians Drink?

Franck has dominated domestic coffee for decades. Originally established in Zagreb, in 1892, as a producer of affordable coffee substitute milled chicory, Franck has been the major commercial producer of roasted and ground coffee in Croatia ever since it began coffee production in the 1960s. It more or less monopolizes the supply of coffee to café bars across Croatia—although in the last decade or so, coffee companies such as Illy, Lavazza, and Julius Meinl have grasped hold of some of the market share. Interestingly, the Franck coffee brand (including several sub-brands), also dominates local supermarket shelves: an indication that the Croatian coffee consumer is extremely brand loyal. 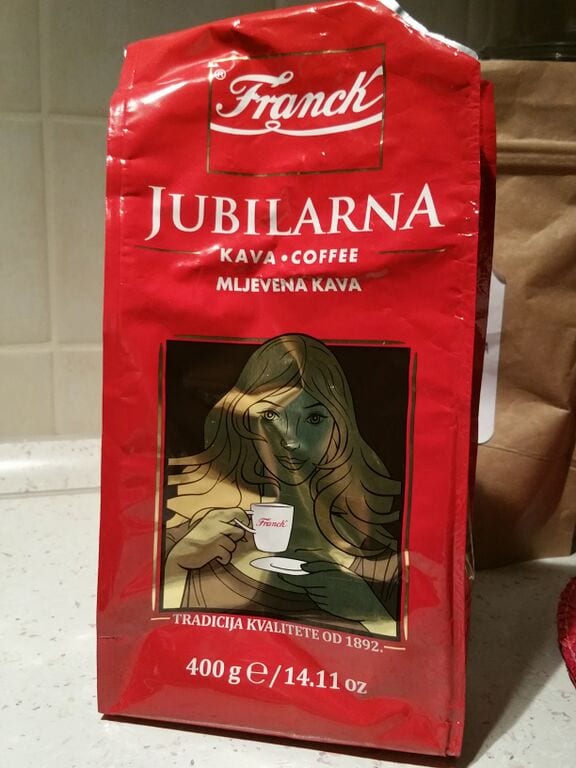 Traditional Franck coffee, available in every supermarket or grocery store around the country, is the most popular option for home brewing.

Drinking Out of The House

When people drink coffee out, they’ll typically have an espresso-extracted beverage. Once again, the coffee of choice is 100% Arabica beans, roasted by commercial roasters for espresso extraction. However, the choice of drink is a lot more varied. The best selling ones are milk-based, such as the macchiato and cappuccino. The most popular of these is the Croatian kava s mlijekom, or ‘coffee with milk’. It’s similar to a flat white, and usually made with warm milk. A cold milk version is also popular, though, particularly in the hot summer months. As well as these, regular customers often have their own favourite coffee that’s derived from these classics.

In the last decade, we’ve seen the latest evolution of Croatian coffee culture: the slow emergence of specialty coffee. The movement started in Croatia’s capital Zagreb, arguably with Nik Orosi, Croatia’s first ever Barista Champion and holder of the Croatian Barista Championship titles for 2006, 2007, 2008, and 2013. Nik opened Croatia’s first specialty cafe and roastery, Eliscaffe, in the heart of Zagreb in 2005. He has also begun roasting in Belgrade. 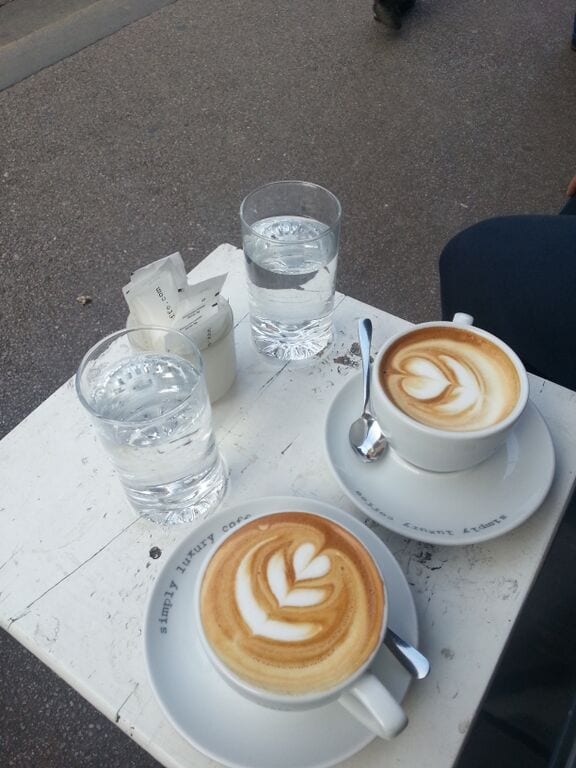 Eliscaffe in Zagreb was the first establishment where coffee lovers could enjoy specialty coffee.

Matija Hrkac is also working towards the development of specialty coffee culture here. His coffee career began at Eliscaffe. Later, he became the Croatian Barista Champion of 2010, 2011, and 2012, and finished in 7th place in the 2012 World Barista Championship under the coaching of Australian expat barista Paul Arnephy. 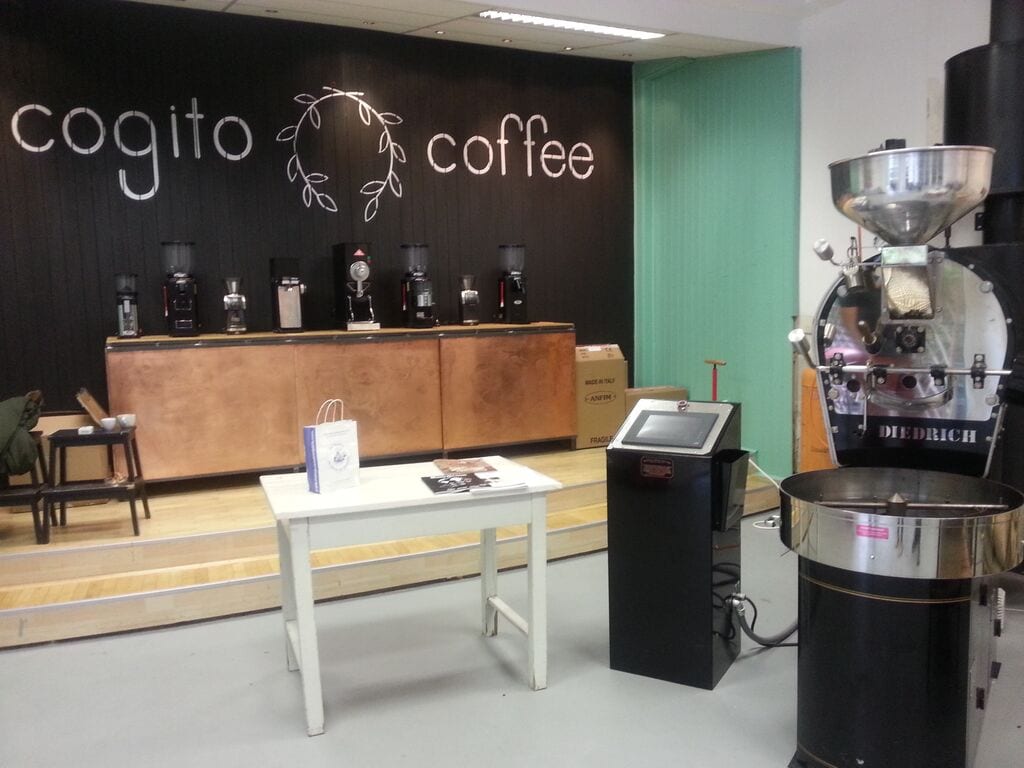 A couple of years ago, Matija Hrkac joined forces with Matija Belkovic to start their own specialty roastery, Cogito Coffee Roasters. Belkovic was an early adopter of specialty coffee, bringing over samples from the US and also stocking Eliscaffe. He already had a café bar, Cafe U Dvoristu, but it was his interest in roasting that drove him to create Cogito Coffee Roasters with Hrkac. They have proven a strong team, having successfully grown their business to 10 clients in little over a year. They recently opened a Cogito café in Zagreb to showcase their roasts. They also offer barista training, not just to clients but to anyone keen to learn to World Barista Championship standards. 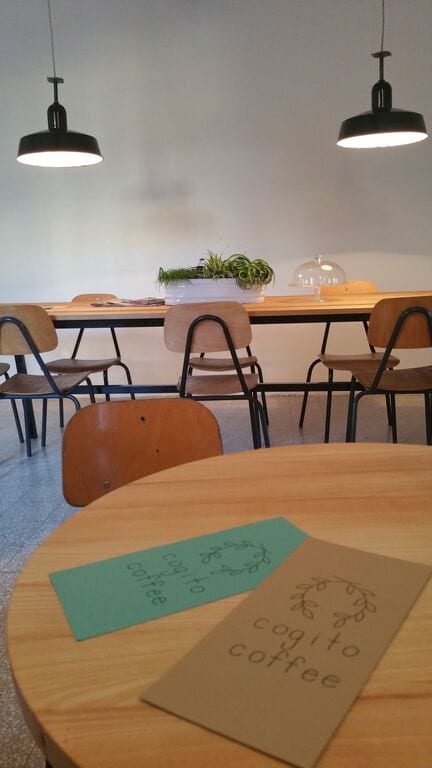 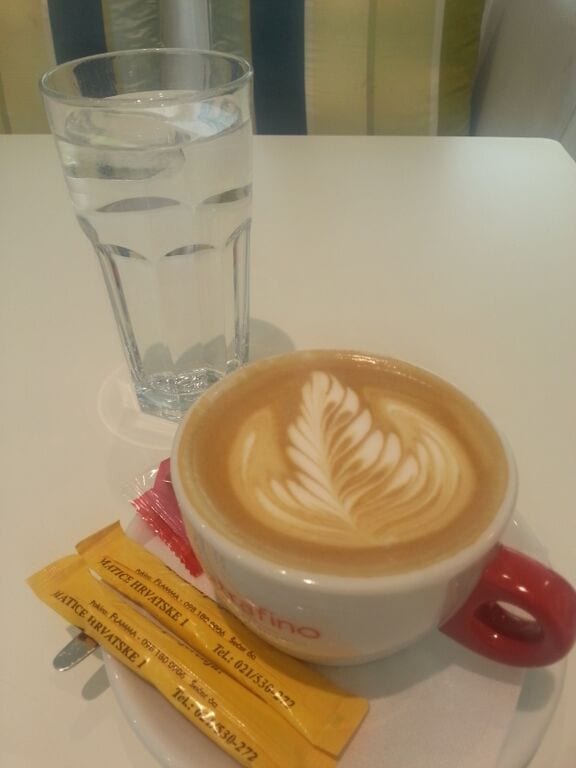 Cukarin in Split. All the baristas have been trained to make the same consistent coffee each time.

With such rapid success for specialty coffee pioneers, and the fostering of interest through training and Championships, it looks like specialty coffee is here to stay. Eliscaffe, Cogito, and Cafe U Dvoristu may be leading the way but there are a number of other cafés that have also embraced specialty coffee principles, such as Giro Espresso in Sibenik and Cukarin in Split. They don’t all offer specialty beans due to contracts to mainstream coffee companies that have supplied machines and equipment, but they all at least follow the philosophy of specialty coffee by training their baristas to make consistently good coffee.

Kudos to those cafés that have embraced locally roasted specialty coffee—such as Express Bar, furthering the third wave revolution of coffee culture. Customers can now expect a much simpler menu, guaranteed high-quality coffee, and total dedication to the preparation of every drink. The focus is on coffee: not juice, hot chocolate, or alcohol, but predominantly coffee. Newer brewing trends are emerging, with the likes of Chemex and AeroPress growing in popularity. Specialty coffee bars also sell coffee for the home consumer and try to inform people of the importance of freshly roasted and prepared coffee. Croatia has such a small population, at around 4.5 million, yet with the saturation of cafe bars and the coffee culture, it has the potential to establish itself as a coffee destination. 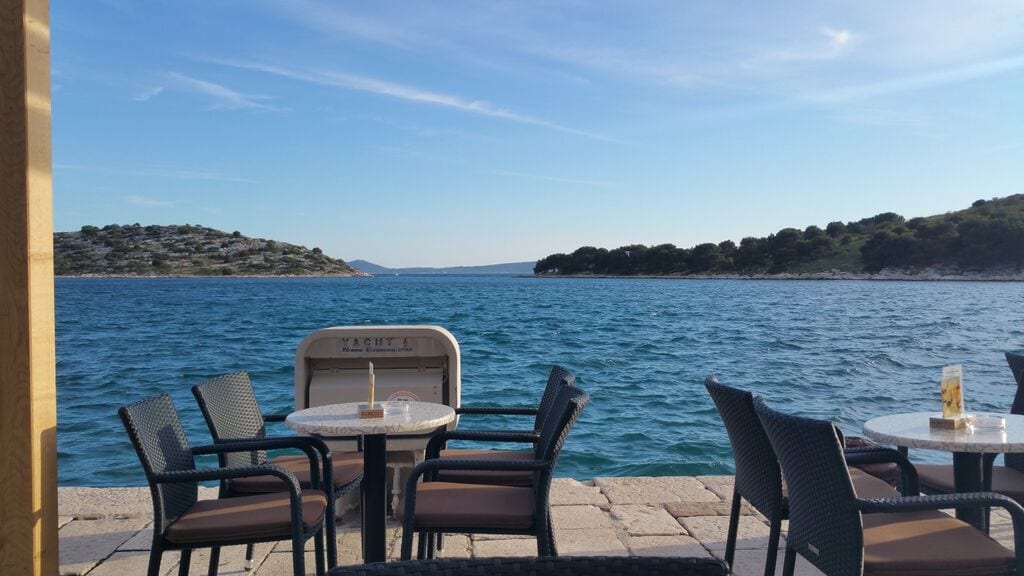 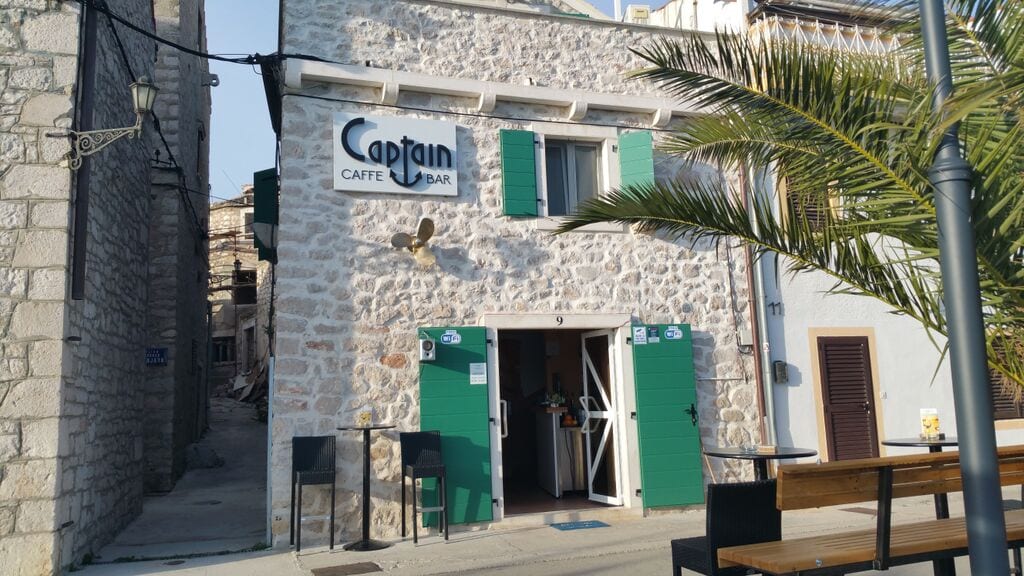 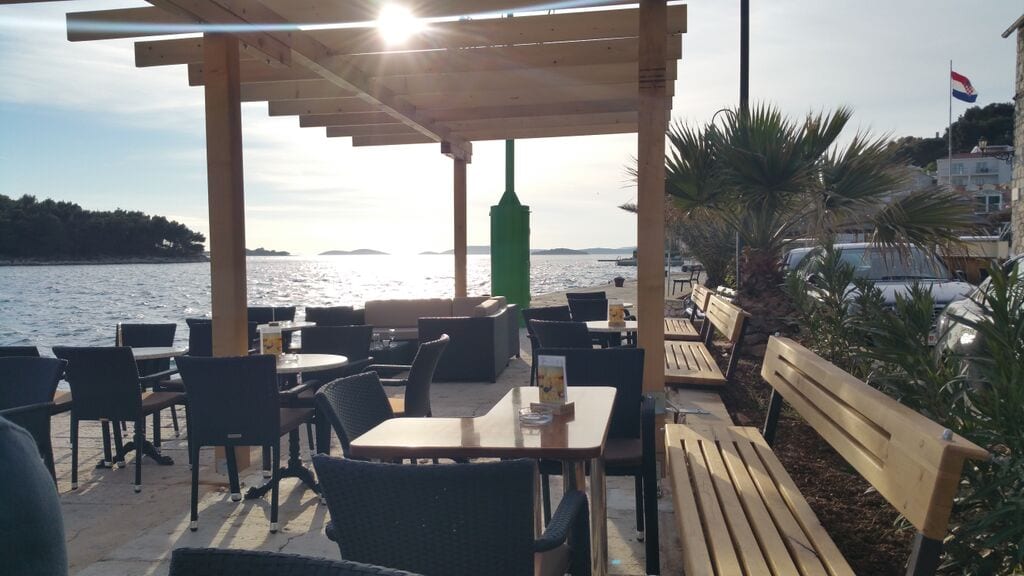 Written by A. Pipunic and edited by T. Newton