Steve Barrett is the guy whose eyes still water when he talks about his coffee. He’s the guy who remains humble even after roasting the 2015 New Zealand AeroPress Champion BK Kang’s winning Finca Teresa Geisha. He’s also the guy making specialty coffee accessible for non coffee geeks. So one Saturday, we sat down with him to talk about—and drink—his coffee at his latest client, the newly opened Geeks on Sainsbury in Auckland.

SEE ALSO: Should We Allow Customers to Dictate How Specialty Coffee is Served? 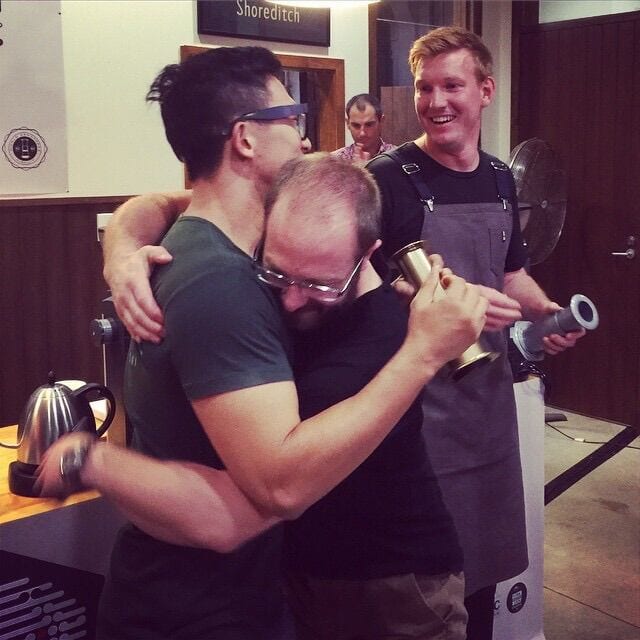 Steve and BK Kang. Winning the NZ AeroPress Championship is an emotional moment.

Who Is Steve Barrett?

Once a professional rock climber who drank “a shit load of coffee every day”, now Steve is the owner and head roaster of Red Rabbit Coffee Co. in Wellington, New Zealand. Opened two years ago, Red Rabbit is a roastery and coffee shop combined, offering both filter and espresso coffee. 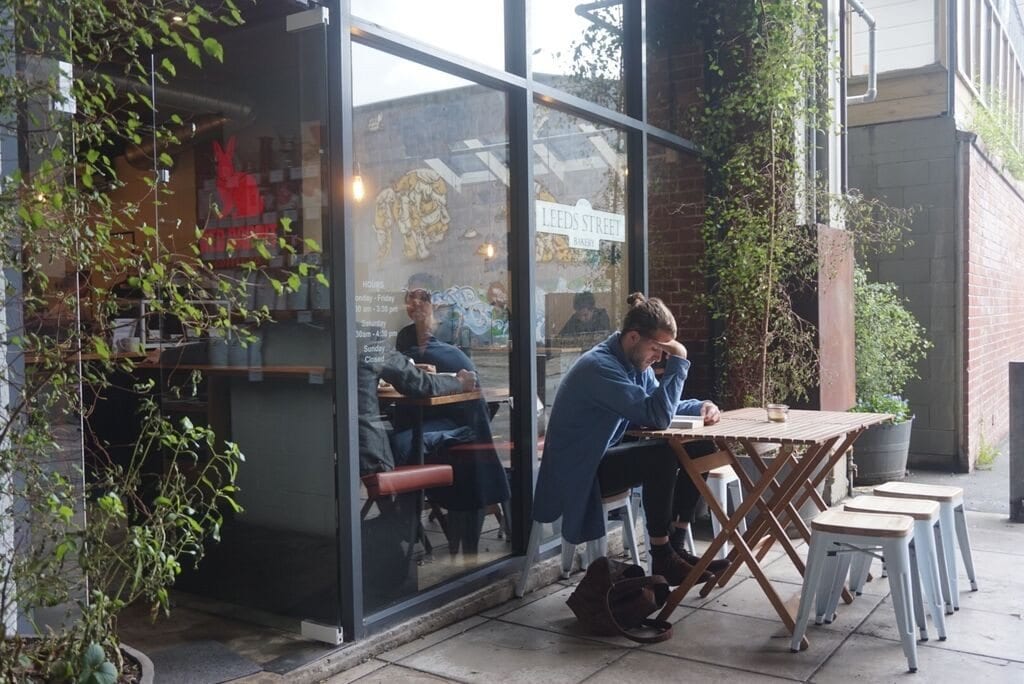 Steve’s aim is “to be different”. Back in 2008, he returned to New Zealand after some time in the UK and found a “uniform consistency” in his café crawls. Everywhere seemed to have the same roast (dark ‘Italian’) and most roasters bought their green beans from the same importers. That’s something that he set out to challenge. As it says on his website, “We aren’t about conventional espresso and roasting methods—that’s not what gets us out of bed in the morning.” 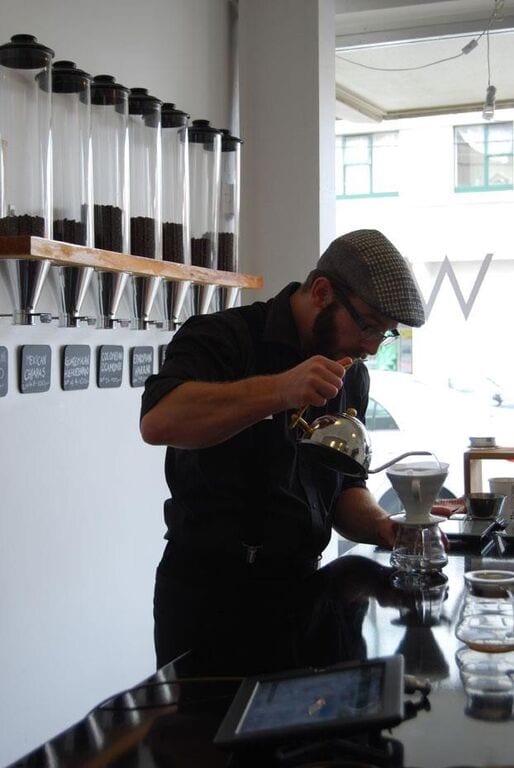 How Sid Steve Get Into Coffee?

Steve has been blessed with both a gifted palate and a lot of luck. In 2008, he decided to pursue his passion for coffee. Based in London at the time, he did a little internet research and then showed up at Square Mile Coffee Roaster’s door. Despite his lack of knowledge about the roastery, or even of who the CEO and World Barista Championship winner James Hoffmann was, he was invited to join a cupping. During the cupping, he impressed the crew at Square Mile so much with his accurate palate that he left with a list of UK-based contacts to reach out to.

Six months later, Steve returned to New Zealand and joined Peoples Coffee in Wellington, a boutique roaster specialising in fair trade organic coffee. In 2012, Peoples Coffee had a filter coffee pop-up store called Brew Town, and there Steve got to experiment, educate, and interact with the local coffee lovers.

It was also with Peoples Coffee that Steve first tried roasting. Soon after, he won one Silver and two Bronze awards at the 2013 Australian International Coffee Awards (AICA) with his fair trade organic blend. Feeling impressed? It gets even better—it only took him a couple of weeks to finalize the blend.

Soon after, Steve opened his own shop—Red Rabbit Coffee Co.—and it’s been going strong ever since. 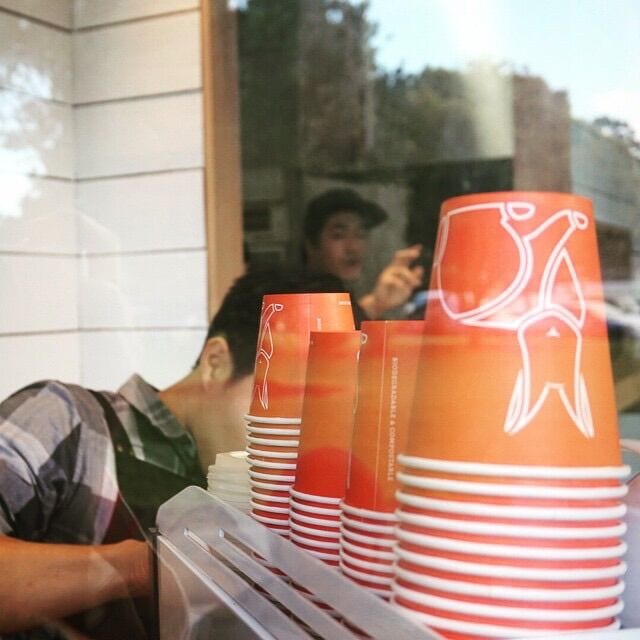 Why Is Steve’s Coffee Shop Special?

At Red Rabbit, there are two rules:

1. You can’t talk about the weather.

2. Never say no to customers. If something isn’t on offer, ask what flavour they want and recommend an alternative.

Why? Well, Steve’s ultimate goal is to “engage people in filter coffee”. Like any good roaster, he sources the best quality specialty coffee from around the world and showcases what small farms and cooperatives can offer. Yet there’s one more thing that Steve thinks is key: good customer service.

“Coffee should be fun and playful,” he said to me. Too often, the industry has portrayed it as a complex subject. Normal consumers have been left behind—even forgotten about—the veneration of complicated notes. Coffee stopped being fun and started being unwelcoming and intimidating. Steve’s answer to this is twofold. One, the baristas guide people in the development of their palates. Two, he “shows people what we do” so that coffee remains accessible. So how exactly does he do this?

First of all, he tries to uncomplicate the labels. Rather than using a light roast or a dark roast, Steve aims to find the best roasting profile for the bean. He avoids complex flavour notes that non coffee professionals can’t decipher; instead, he places fewer and simpler notes. It then becomes much easier for consumers to pick out the notes. Once they can do that, consumers have a sense of achievement and a boost of confidence that leaves them wanting to return and try more.

Secondly, he remains transparent about his brewing recipes. He wants consumers to enjoy his coffee every bit as much at home as they do in the shop—which means making sure they know how to brew it well.

Little details make big differences, and through these small steps, Steve aims to both accommodate and inspire consumers that might otherwise shy away from trying specialty coffee.