Why Is Ecuadorian Coffee Selling Better Labelled as Italian?

I’m sitting in Traviesa Cafe with the owner, Felipe Cisneros. It’s a quiet little place, minimalist, notable primarily for the large Diedrich roaster situated at the entrance. It’s on this same machine that Felipe roasts the coffee served here. Customers can choose between four different levels of roast and a variety of brew methods. I chose level two, the second lightest. The grinds had the appearance and texture of red velvet cake, qualities that came to life in the AeroPress prepared right there at the table by the lovely barista. I already knew that Felipe had built a reputation as one of the top specialty coffee roasters in Quito, but it was a pleasant surprise to see that he had built a cafe experience to complement the quality of the coffee.

SEE ALSO: The History of Brazilian Coffee & The Story Behind ‘Daterra Full Bloom’ 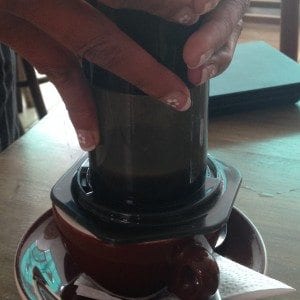 It’s the small details that make a memorable AeroPress experience

It was this reputation that I had expected to discuss with Felipe this sunny afternoon at Traviesa. Inside, it’s cool and quiet. On the wall opposite the entrance, a long window gives a view of the city. In the distance are the mountainsides, omnipresent and dotted with brightly colored structures. The foreground is dominated by a construction scene: a crew of workers dangles along the outside of a prefab concrete skeleton that will one day be another anonymous high-rise. A large green tarp hanging off the side of the construction project rolls languidly in the breeze. Occasionally it comes between the sun and the window, casting the interior of the cafe in a cool emerald light. 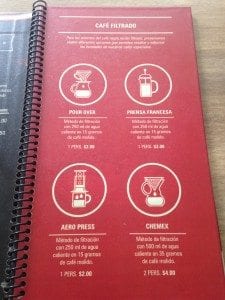 We start off chatting about Felipe’s past. “Everyone who is in the coffee business,” he begins, “arrived there by accident.” For Felipe, it was as a student at Southern Oregon University. To supplement his scholarship he got a job as a barista at a local cafe. He found it a skill he excelled at and soon had clients that came just for him. He gravitated towards roasting and studied it as much as he could while there.

Upon returning to Quito, he opened Cafeto, a specialty coffee shop and roastery, in the historic center. The demand for specialty coffee, even now in its nascent stages in Quito, was at that point practically nonexistent. However, the steady stream of tourists that passed through provided enough business to stay afloat. That success led to Traviesa, a project aimed at providing a more refined specialty coffee experience as well as educating and catering more to local Quiteños. 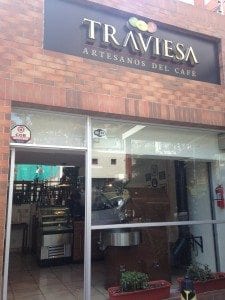 Surprisingly inconspicuous despite the huge roaster at the entrance

The Economics of Coffee Consumption

Felipe is a thoughtful speaker. He measures his words carefully while his hands play with a scrap of paper, folding it and unfolding it, and gradually tearing it into smaller and smaller pieces.

“What are the keys to growing the specialty coffee culture in Ecuador?” I ask him. “What part does Traviesa play in this movement?” “How have people responded to its project?” These questions are, at heart, different ways of asking one question. It is a question that encompasses economic, historical, and cultural factors—themselves one unified story—larger and more layered than the simple way it can be phrased would suggest: “Why is it so hard to find specialty coffee in coffee producing countries?”

At first glance, it’s a matter of simple economics. Specialty coffee is simply more expensive than traditional coffee. For most enthusiasts, it is money well spent—higher quality coffee is necessarily more expensive, and having seen firsthand how much work a coffee harvest entails, I for one am happy to compensate farmers fairly. Nevertheless, for the same price as an espresso, which in Quito will run you from $2.00 USD to $2.75. Just a few blocks from Cafeto down in el centro you can get a full meal for that same price. The meal, typically Ecuadorian, will come with a soup, an entree, and an instant coffee. No, it won’t lift you spiritually, but it will fill you up, which is what most Ecuadorians are looking for.

Still, the economic explanation only carries us so far. Ecuador’s middle class has more than doubled in the past decade1, yet specialty coffee has been slow to reflect this trend. Felipe explains this, using the tiny flakes of paper he has been toying with to illustrate his point. The business leaders and politicians, he claims, make more money selling natural resources overseas, where they are turned around and sold back to Ecuador at a higher cost. “How is it,” he asks, “that Ecuador produces the best cacao in the world, yet when you ask who makes the best chocolate, people invariably say the Swiss?”

Where Is Your Coffee Really From? – A History of Disparity

This model is nothing new. Consider the situation of Italian tourists passing through Quito being overjoyed to find a proper Italian espresso being served at Cafeto. The fact that this drink, made from the cherries of a plant grown in Ecuador, is considered as Italian as it is Ecuadorian (or Latin American, or African, or Asian, for that matter), is telling of how thoroughly coffee is tied up in historical patterns of trade, patterns so old that they have indelibly shaped cultural identities on both sides of the Atlantic.

Under the colonial system, European (and later, American) nations exploited the rich natural resources of Latin American colonies, establishing uneven trade relationships where the colonizers would extract resources to the Old World, fabricate goods, then sell these items back to the colonies at a higher price. These patterns changed very little after the Spanish colonies achieved their independence; in fact, arguably the biggest difference was the change in which country dominated the export-based economies of Central and South America, especially after the United States rose to the status of a global power.

In the middle of our conversation, Felipe suddenly stops. “Would you like to try an Ethiopian coffee?” he asks me. “Wait right here.” In a minute, he’s back with a Chemex and fresh grinds. A precise four minutes later, we’re both sipping a fresh, citrusy cup. 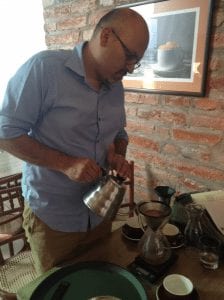 Felipe works the Chemex with a practiced ease

By the end of the 19th century, coffee production had achieved a high level of technological sophistication, allowing for yields and quality to dramatically improve. Meanwhile, Europe’s and America’s industrial revolutions were fueled by the natural resources of current and former colonies, and the workers in these countries were themselves fueled by Old World goods—tea, coffee, and tobacco, so common in Europe as to approach stereotype status, became staples of the industrial workday. Other former colonies in Asia and Africa share a similar history—most notably, the slave trade in West Africa. Efforts at industrialization among Latin American countries have met with varied success. Overall, Latin American countries remain export-based economies reliant on their natural resources to keep their economies moving.

The Bitter Taste of Coffee Culture

But if Europe and the US have fashioned cultures based in part on imported goods, the same can be said of Latin American countries and their exports. Hence why the term “export quality” is used to denote the highest quality coffees produced across the region, while the lowest quality (and if you’ve ever seen early or late harvest pickings, you’ll know that calling it coffee at all is quite generous) become the instant coffees that characterize Latin American coffee culture.

This is why Felipe’s Traviesa project is more than just a coffee shop and more than just a roastery. There is an urgency here, a mission. Centuries of economic exploitation have resulted in many Latin Americans not even recognizing the value in the same products that have Americans and Europeans gushing. It’s disappointing, then, when Felipe tells me that he will soon be closing Traviesa—which has remained empty except for us this entire time—and relocating to Cafeto once again, where he can count on the tourist dollar while the Ecuadorian coffee culture keeps developing.

I ask Felipe if he expects changes in the future. After all, I propose, the specialty coffee movement is as much based on direct-trade relationships, de-anonymizing producers at origin, and paying fair prices for coffee. But these are just minor changes from Felipe’s perspective. As a roaster competing with foreign exporters who leverage a far higher purchasing power, he struggles to source high-quality beans. Even though farms are located just a few hours from him, he ends up having to pay export prices; which means he has to charge more; which makes it more difficult to sell, and therefore develop a market for, specialty coffee. So as much as the development of Fair-Trade, Direct-Trade partnerships, and the like have eased coffee-lovers’ consciences over the past few years, the reality may be that the same unequal patterns of trade (the same patterns that once traded slaves) are being further entrenched. 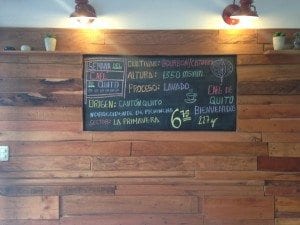 Like most specialty cafes in Quito, Traviesa features coffee grown just a couple hours away

Hope for The Future

Despite everything, Felipe maintains a positive attitude. “My only regret,” he tells me, “is that I started so late. If I could go back and do it all again, I would start studying coffee much earlier.” He offers to drop me off at the bus stop I need to get to, where I will proceed to accidentally take the wrong bus and end up on the wrong side of the city—in other words, a typical afternoon for me. “Ecuador has a coffee culture,” Felipe is telling me as he navigates the traffic. “People use it as a pretext for meeting, or at family gatherings, they’ll bring it out. And sugar is part of that tradition, which is something we in the specialty coffee world have to recognize.”

“But can that tradition be integrated with this new specialty coffee movement?” I ask.

“I think so,” he tells me. “What I’m waiting for, what I expect will happen, is that someone will come along and introduce something completely new.” It’s certainly possible. If the history of Latin America is a history of struggle, it is also a history of creativity. Literary, artistic, musical, and culinary creations have come to define the region as much as the circumstances from which they blossomed. There’s no reason to believe coffee can’t be next. With that thought in the air between us, we shake hands, I hop out at the intersection, and he continues onward.