Music festival-goers and coffee lovers have a lot in common. They’re both really passionate about something most people don’t take too seriously, they share a common lingo unintelligible to outsiders, and they both rely on stimulants from all over the world to make it through their day or night.

It would seem, then, easy for a specialty coffee lover to cross into the world of all-day drinking, all-night raving, eight dollar funnel cakes, and light-up hula hoops. That, at least, was my hypothesis, and I set out to test it as scientifically as possible at none other than the fabled Bonnaroo, one of the biggest, most famous, and hardest to spell music and arts festival in the United States.

What is the objective?

To do specialty coffee right at a big-time music festival so as to impress all my friends; turn heads with my pour-over skills and discover what specialty coffee can be outside of its normal setting, i.e. the coffee shop or the home lab, with their clean surfaces, air conditioning, and general comfort. I was searching for specialty coffee in its rawest, most elemental form, divorced from the hype and the style. I would find out, however, that such a task is much easier to phrase poetically than to do. 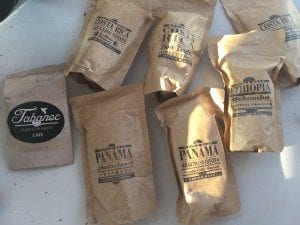 For the weekend, I picked up a handful of coffees from Java Pura, a roaster in Houston, Texas

After a few navigational mishaps, we arrive at Manchester, Tennessee at about 2am. Our initial excitement quickly goes flat as we find ourselves in a mile-long line to enter the festival until finally reaching the gates four hours later. Running on almost zero sleep, we set up camp and are ready to crash at about 8am, except that now the sun is now out and the temperature is quickly rising to about the mid-90s.

I know my first coffee of the trip has to bring the noise. I was hoping to get a good deal of acidic bite and sweetness out of the yellow honey and boy, did it deliver. By the time we finish sipping, the sun is starting to go down, temperatures are beginning to drop, and we feel refreshed and ready to rock. A solid start for coffee at Bonnaroo. 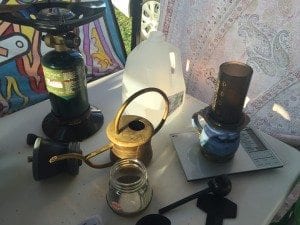 The essential elements of specialty coffee in the wild

We wake up to cloudy skies and give thanks to the weather Gods, in addition to our daily offerings to the bass Gods. It’s shockingly early and I want to prepare a killer breakfast coffee with some pancakes and bacon. The problem is the pancake mix is in my friend’s car and he’s already lost his keys. So it’s coffee and bacon only, but to be fair, that’s still hitting the two essential camping food groups: flavor and bacon.

While we prepared everything, a couple of guys came by trying to sell me some “fire stuff” from the Netherlands, but when I asked them what date it had been roasted they didn’t know. “Take a hike, then,” I told them. I know better than to brew coffee whose roast date I don’t know.

Cupping Notes: The moka espresso came out kind of bitter, probably because of the super long extraction time given how long it took to heat up on the camping stove. Still, it had a strong blueberry flavor, especially as it cooled a bit. The pour-over even more so. The blueberry taste went well with the peppery bacon and filled in quite adequately for the pancakes. 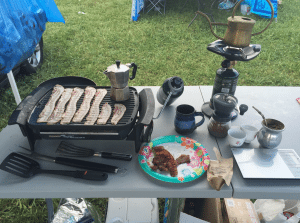 Coffee and bacon on day two

They say Bonnaroo is a marathon, not a sprint, and it’s true—massive crowds, long hours, and for some reason there’s always an old guy with a beard who thought it would be a good idea to rock jean shorts. The main difference between the two, however, is that marathons tend to start at about seven in the morning so that you’re finishing before it gets too hot. Bonnaroo, on the other hand, doesn’t really get going until the hottest part of the day. The slightest of breezes this morning is probably the only thing keeping me from melting into my own shoes, so I decide to experiment with brewing this delicious-smelling Costa Rican coffee over a few chunks of ice I swiped from our cooler from Survival Cooking.

Unfortunately, I messed up the ratio of water to ice and came out with a slightly watery cup, but I could still detect some comforting hints of chocolate and fruitiness. Strangely, despite brewing it in the Aeropress, the coffee had the grittiness of a FrenchPress—which, looking back, was probably just because the mug was dirty. When you’re making coffee while camping in Sahara-like conditions, water is a precious resource, and so most cleaning was done with a wipe from whatever clean real estate I could find on my shirt. You can’t worry about these things when you’re camping; fear is the mind killer.

Cupping Notes: Not really tasting much of anything right now, but the mouthfeel is crisp and bright. The extra water is helping me stay just north of serious dehydration levels. 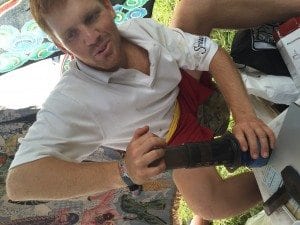 The AeroPress loses none of its grace in its new, crowded, trashed out habitat

I’ve been trying to avoid drinking coffee more than once per day in order to avoid dehydrating myself any more than necessary, but the prolonged exhaustion and constant thump of bass in the distance has led me to some irrational decisions. What’s super rational, however, is my decision to go with this killer natural process I’ve been itching to get at. We’re going to see Gary Clark Jr. next, so I went with the FrenchPress to give my coffee a mouthfeel as delightfully gritty as Gary’s distortion pedal. Currently, though, we’re jamming on some Roy Ayers at the campsite, and the coffee’s fruity flavors pair well with the colorful acid jazz tunes. With our tongues and ears in harmony, the mood is improved, energy is up, and success has attended our efforts.

Pro Tip: You’ll notice I used the FrenchPress a fair bit this weekend. To be honest I’m quite fond of the chalkiness in the cup, plus it’s easy to make coffee for a group of people. I find that a good ratio of coffee to water is 1:15 grams, 3-4 minutes of brewing, and with a nice course grind (fairly difficult with an unmodified Hario hand mill; I pull upward lightly on the lever while grinding to try to keep things uniform)

We’ve made it to the last day of the festival with all of our fingers and toes intact. To celebrate, and as a tribute to Flume’s transcendental set a few hours ago at 2am, I’m breaking out the crown jewel of my Bonnaroo coffee stash: some Panamanian Geisha. My hand is trembling as I pour, but my aim, like my heart, is true, and I manage to extract a pretty good cup. In the distance, I can hear the bass from the Kalliope stage, where DJs are overheating their Macbooks until as late as 6am. The ravers, trap lords, trap queens, and closet juggalos over there probably won’t agree with me, but man, this cup of coffee right here is the only high I’ll ever need. I sip on my brew and reflect on the past few days while hearing the womp womp womp of the bass in the distance.

Cupping Notes: Citrus blast straight to the dome. Like two mandarin oranges put my tongue in a headlock and are taking turns wailing on it. Acidic. 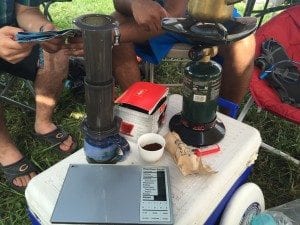 Space is a commodity when all your flat surfaces are coolers

Camping, sweating, and generally being grimy doesn’t mean you can’t make great coffee. You will, however, have to make some adjustments. Making coffee outdoors means you need to take ambient temperatures and hydration into account. You can’t be downing ten cups a day when you’re sweating out a gallon and a half by lunchtime. It’s also key to keep in mind that when you’re brewing coffee from a lawn chair, on a cooler, under a tarp, it’s a lot less precise and therefore some unexpected things can happen in the cup. Embrace this and let yourself be surprised instead of disappointing yourself over not achieving the desired outcome. This, perhaps, is the key lesson of Bonnaroo. You sacrifice pretty much all control you have over everything: temperature, comfort, ease of movement, scheduling conflicts, number of hippies you see per hour. But, with the right attitude, you can still have a great time, drink great coffee, and see great shows.

Going to Bonnaroo is like stepping into the early days of the Mad Max universe: the grass, lush and green at arrival, and is brown, scorched, and dusty by the end of the festival. Water is a precious resource. People dress up in weird outfits and engage in rituals of celebration and praise to the Gods of Rock, the Rap Gods, and of course, the Bass Gods. And there I am, in the middle of it all, trying to maintain some kind of tie to the civilized world, which is now as much a dream as this surreal landscape around me is real—all too real. A lone warrior for the forces of decency and of flavor. A hero really. So can you accomplish specialty coffee at a music festival like Bonnaroo? Yes, but first, you’ll need to survive. 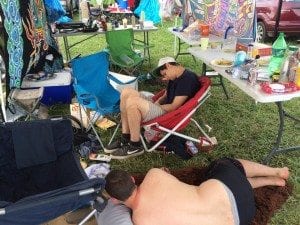 Written by Z.Latimore and edited by H.Wilson

Coffee Pricing: Why We Need to Know Farmgate And Not Just FOB