How Does Coffee Affect Your Brain? Are You Addicted to Caffeine?

Yawns are the body’s silent screams for coffee. *AGREED!*

I was curious to find out how little coffee beans that were perfectly picked, roasted and weighed for my morning cuppa joe, always managed to save the day: what actually happens when that liquid gold hits my tongue? Is it affecting my brain? Why do I keep reaching for more – am I a coffee addict? Is yawning the body’s silent scream for coffee?

A quick background: coffee contains 99% water; the other 1% is made up of various compounds such as aromatics, caffeine, phenols, oils and others components, which impact the “flavour profile” of your coffee. Some of these compounds are made during the roasting process, and some disappear with the roasting process. To keep it simple, I am going to focus on the most famous component, caffeine. 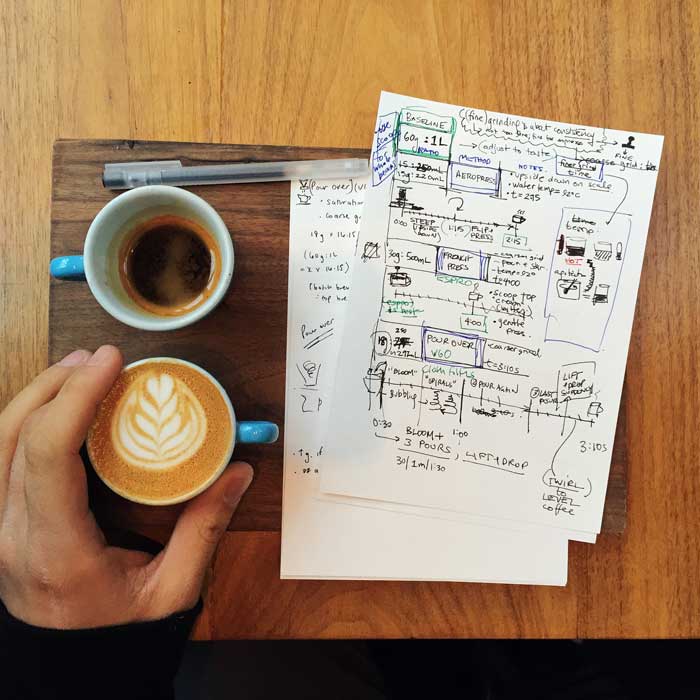 Different types of coffee contain different amounts of caffeine which may change the way your body feels after an espresso vs. a filter coffee or even a macchiato! Credit: @thecoffeetrail

Pure caffeine is actually a white, bitter and odourless powder that belongs to a group of chemicals called purine alkaloids.1  It occurs naturally in many plants like cocoa, yerba mate and guarana. The caffeine in plants has varying effects. It acts as a pesticide against some insects but also helps the memory of others, like bees. The increased memory capacity in bees from caffeine results in them returning to that plant to pollinate it and help it survive.2 (Cool, right?)

So, what about humans? In the coffee we brew, the caffeine content varies depending on how you brew it. Brew methods differ in extraction time, temperature, and grind size which all contribute to the concentration of caffeine in your cup. Interestingly, it is thought that 90% of the caffeine content from the bean is extracted in the first minute of brewing, regardless of the chosen method.1 So, what effects does caffeine produce in humans? Are we like bees that keep returning to pollinate coffee shops? 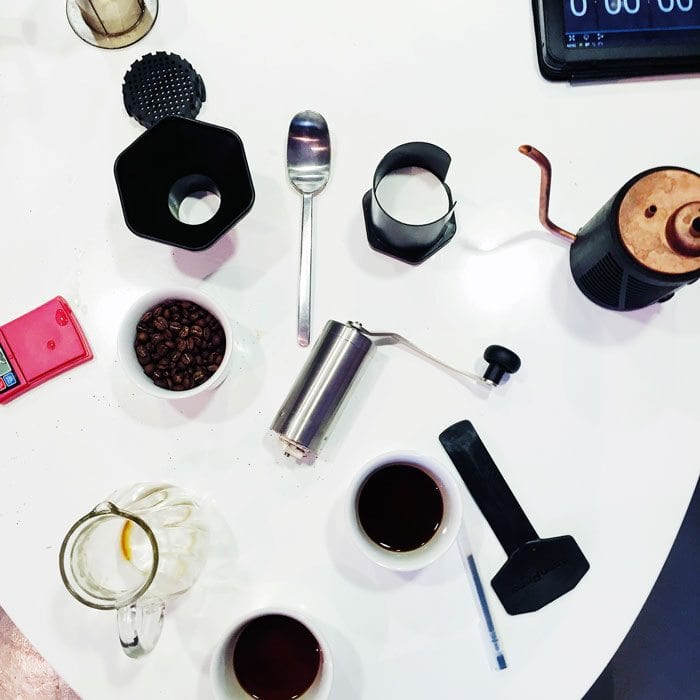 Experimenting with different extraction time, grind settings and water temperature can all effect the amount of caffeine extracted into your cup. Credit: @thecoffeetrail

Read the following exercise. Close your eyes, try it and see how you feel.

Think about your worst fear. Maybe it’s an ex-boyfriend or girlfriend, maybe it is a big hairy spider or something you absolutely fear doing, like public speaking.

Now, imagine where you are, the way your fear looks, smells, feels. Anticipate the event, person or place. Visualise the event approaching closer until the moment approaches where it is unavoidable. The feared object is right in front of you or that thing you absolutely dread doing has to be done.

How did you feel? When our bodies feel threatened, they automatically enter a protective mode. We become alert and aware, our hearts beat faster, pumping blood to our muscles and vital organs. Our eyes start to focus by constricting the pupils. Muscles become tense and you’re suddenly ready to fight, or run.

This is essentially what caffeine does to the body, producing the same effects the body does when it is in a position of potential danger. If you overdose on the v60 brew you may feel some extremes of these effects: heart racing, feeling alert and aware. These symptoms are produced by the stimulation of the body’s sympathetic nervous system otherwise known as the “Flight or Fight” response. But how does caffeine, a small tiny compound that makes up 1% of your cup of coffee, manage to do this?

Caffeine is broken down into 3 major chemicals in the liver: Theophylline, Paraxanthine and Theobromine. The names aren’t particularly important but together they work to block the effect of a neurotransmitter in the brain called Adenosine. Neurotransmitters act on receptors in brain cells (neurons) to create an effect. It’s a bit like a lock and key: neurotransmitters fit particular receptor sites in the same way that a key fits a lock. When you insert a key into a lock, it opens a door (an effect).

Without getting super nerdy, adenosine and caffeine both act as keys for the same lock. They are chemically identical, but they have completely opposite effects.  Adenosine normally increases throughout the day, which results in you feeling sleepier; this is why we are ready to snooze by 11pm. When the caffeine “key” binds to the Adenosine receptor “lock”, the brain throws out the old Adenosine key, and allows caffeine to open the door – the result, you wake up! 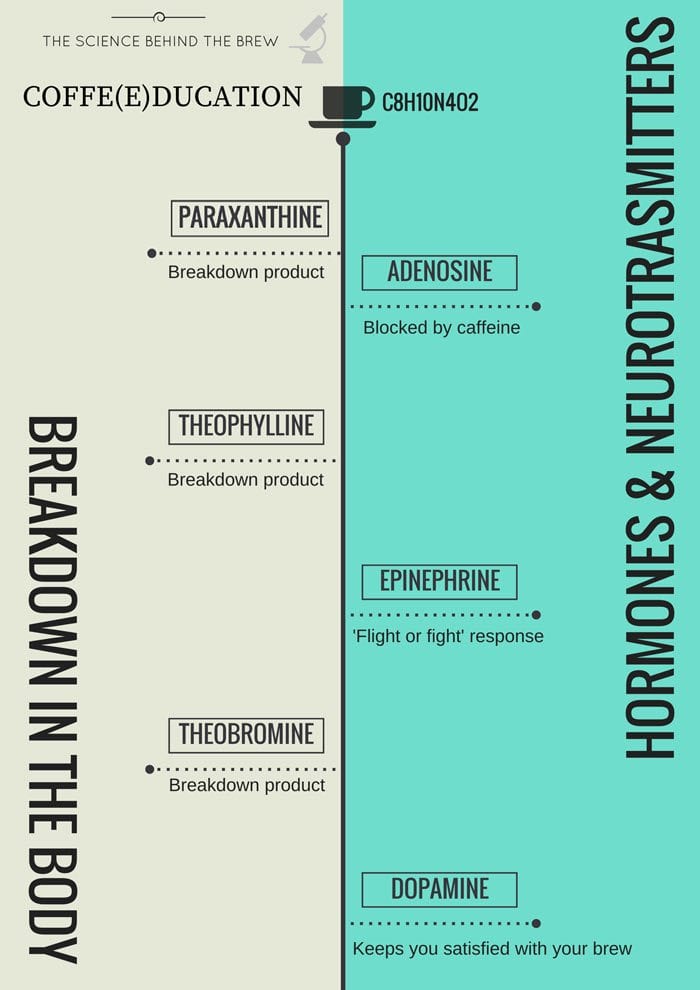 This is a quick guide to the breakdown products of the caffeine in your cup – on the left – the breakdown in the body on the right – the hormones and neurotransmitters discussed in this article that produce the effects you feel when you have your morning brew. Credit: @thecoffeetrail

Caffeine also has an impact on the bodies endocrine system (the system responsible for hormones) and stimulates your body to increase something called Adrenaline/Epinephrine. This hormone allows your body to enter that “Flight or Fight” mode discussed earlier.

Is coffee addictive? Maybe. Studies have also shown that high doses of caffeine causes the release of Dopamine and Glutamate in the ‘rewarding’ part of the brain (known as the nucleus accumbens). 3,4These neurotransmitters are responsible for the enjoyment you feel with the perfect brew, and may keep you coming back for more.

Unfortunately, from my research – I found out that yawning had many theories and is merely just a way for the body to involuntarily take a big breath. That being said, there was no definitive reason…so I will still reach for my Aeropress when I yawn!

Check out the video below, and some studies (below video), which I have referred to for more information.